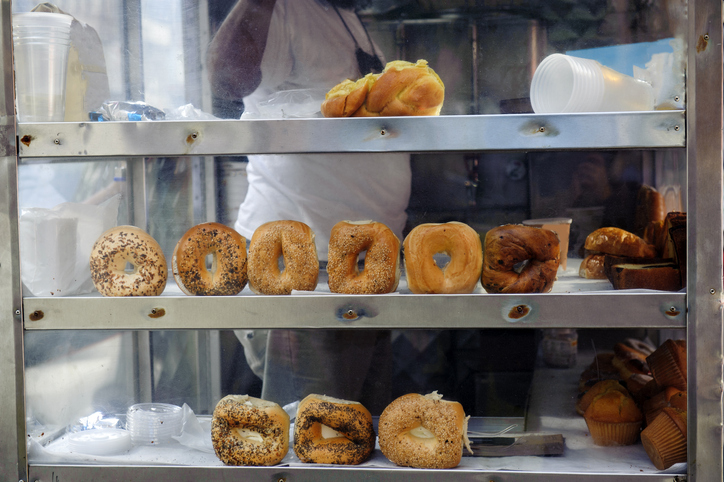 More than any other meal, breakfast has been susceptible to the rise and fall of our impassioned trends. Photo by Feifei Cui-Paoluzzo/Getty Images

In New York City coffee carts can be found on almost every block. They’re tiny aluminum boxes on wheels with enough space for a vendor to stand surrounded by his wares--yes, they offer more than just coffee: bagels with cream cheese or butter, pastries, hard boiled eggs, bananas or apples, and coffee (both iced and regular, and sometimes flavored). Slightly larger carts may have a grill and can produce egg sandwiches. Strategically inclined vendors who are able to position themselves at a subway entrance are potentially the first real human interaction many New Yorkers experience for the day. For those who indulge in the meal, weekday breakfasts are made into a simple experience. This perception is magnified by the coffee carts themselves, who in their shiny, metallic facade have come to embody a tumultuous history of food and eating by offering a simple variety of the more common choices that have come down through history.

For much of history, breakfast existed in the shadows. While beautifully preserved cookbooks and food histories tell us about lavish meal productions in ancient times, this simple morning meal has often been overlooked in the annals of history. But we’ve clearly been eating something for a morning meal. From an etymological perspective, the English word “breakfast” is derived from the French disdéjeuner, which in turn comes from the Latin disieiunare meaning “un-fast.” Disdéjeuner was contracted in the 11th-century to disner and became the English “dinner.” The usage of “dinner” coincided with a shift of the main meal of the day from midday to evening. The French déjeuner became the midday meal (lunch), and other languages followed suit, relegating the early morning meal to a petit déjeuner--literally a small lunch. It is almost as if from a linguistic perspective we were looking to intentionally de-emphasize the significance of a morning meal by making it a variation of an existing one.

However named, it's clear that people were breaking their nighttime fast in some fashion. Many Ancient Romans ate three meals a day, but the times for these meals changed for a myriad of reasons. The morning equivalent of breakfast (jentaculum) consisted of bread, cheese, olives, salad, nuts, dried grapes, and cold meat. If resources permitted, they may have also included milk, eggs, and a wine and honey mixture. The poet Martial notes that breakfast likely included pastries. And there seems to have been a separate offering for children who were too young to feed themselves: they were given porridge or puls, which was comprised of a base of millet. The Roman adoption of the meal is reflected in the arts, as well. In the play Curculio, Phaedromus gathers wine, olives, and capers for a pre-dawn early breakfast with his mistress. But even before that, in Grecian literature, Homer makes reference to ariston, an early morning meal. And in both The Iliad and The Odyssey, characters partake in ariston before attending to the day's chores and needs.

Somewhere along the path to the Middle Ages, breakfast fell out of favor. The meal was labelled as an indulgence as the Catholic Church gained ground. And this label stuck when Thomas Aquinas asserted that praepropere—eating too soon—was one of the ways to commit gluttony. Two meals were sufficient unless you were a child, old, ill, or a laborer. Needing breakfast reflected on you as a person: either you lacked the stamina or the means to go without the additional calories. In the former instance, you were too weak to go without sustenance until the first real meal of the day. And in the latter, you were poor and needed energy for labor. In either of these cases you were not treated to a lavish meal. At best you would get a bit of bread and cheese and some ale. By the 1500s, physicians were actually warning against the morning meal—which is a far cry from the much publicized message of “the most important meal of the day” that we have come to know. Instead they recommended a morning walk to get the blood flowing and trigger bodily functions.

Still, there were people who continued to break their fast in the morning. Queen Elizabeth I, for example, was an early riser and had been known to have a morning meal of white bread, ale, beer, wine, and a stew. And other nobles followed suit so that by the seventeenth-century breakfast was more readily accepted, and in some regards, celebrated: The Dutch immortalized it in their still-lifes, and the wealthy began to build breakfast rooms specifically for the meal. In the nascent United States, colonists (depending on their means) filled themselves with oatmeal porridge, fish, poached eggs, broiled ham or bacon, buttered bread, marmalade or fruit, and tea, coffee or cocoa. Building a nation was hungry work, and this meal was meant to carry them through lunch at the very least.

The state of breakfast had largely been driven by religious or economic needs in this story. There existed a divide between who can eat the meal and why, and what foods are appropriate for this event. This remained true in the 1800s. In America, breakfast continued to impart a status: Laborers rose early and attended to tasks (which may have included preparing breakfast for others) before sitting down to eat, while the wealthier classes could sleep in and have a later and larger meal. People were encouraged to have a small meal and avoid warm foods and tea (though coffee, milk, water and cocoa were acceptable). This is where breakfast cereal enters the story.

The American breakfast landscape was forever altered during this time when a growing health awareness swept the nation. Suddenly people were obsessed with the pursuit of unprocessed foods and clean eating, which was a cornerstone to the treatments offered in the sanitariums of the period. In 1863 Dr. James Caleb Jackson invented “granola,” crisped and crumbled nuggets of bran-rich Graham flour. It was a great source of fiber and was intended to help combat the digestive pains that came with eating too much meat, but required soaking overnight to be edible. In 1894, Dr. John Harvey Kellogg accidentally created a flaked cereal when a pot of cooked wheat went stale. Kellogg tried to save the wheat by putting it through a roller. It dried in flakes and corn flakes was born. Corn flakes fit the prescribed regimen from Kellogg: exercise, fresh air, lots of baths, and simple, bland foods—like cereal.

But cereal was also accidentally convenient. It didn’t need to be cooked and it had a relatively long shelf life. It fit in with the changing world. In cities where people were reporting for shift work instead of working the fields, a lighter breakfast was not only suitable but economical. It saved on time. The larger meals of bacon and eggs didn’t disappear. They were instead relegated to the weekend when time was less of a pressing factor. This division stands in stark contrast to the soul food of the American South, which maintains its ties to caloric foods meant to power laborers through their workday. This distinction is another manifestation of the ways wealth and status determine who can eat and when.

More than any other meal, breakfast has been susceptible to the rise and fall of our impassioned trends. For example, eggs were blamed for high cholesterol for many years and were shunned at the breakfast table. Carbs similarly came under fire from those watching their sugar intake. And the sugary cereal on today’s shelves is definitely bad for you. We should all probably stick to steel cut oats. Breakfast was marketed as the most important meal of the day by the cereal companies themselves. They leveraged the American focus on healthy eating but failed to fully eradicate our fascination with a petit déjeuner—the idea that breakfast was a small meal.

The coffee cart takes no sides in this debate. The variety of its goods allows us to break our fast with what we think will best serve our needs. Marketers know that breakfast loyalty is lasting: we will eat the same cereals and foods we ate as children, and we’re likely to offer those cereals and foods to our own children. But weekday breakfasts, which may be eaten at your desk or during your commute may need to match what what others around you are eating or be as unobtrusive as possible. Perhaps we’ve settled on that coffee and pastry because we’re not sure what we can eat or because it imparts a certain status within our group.