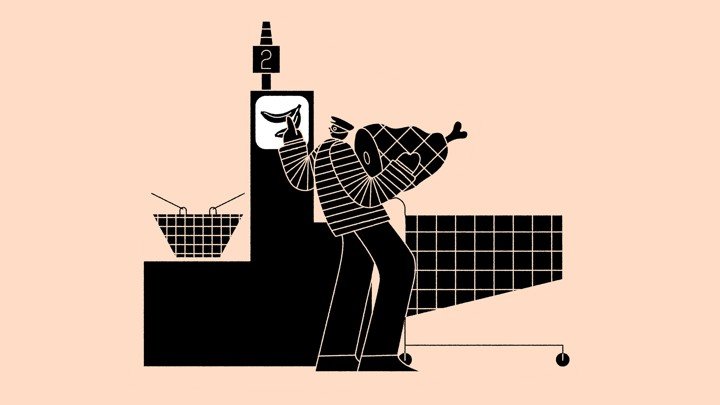 Beneath the bland veneer of supermarket automation lurks an ugly truth: There’s a lot of shoplifting going on in the self-scanning checkout lane. But don’t call it shoplifting. The guys in loss prevention prefer “external shrinkage.”

Self-checkout theft has become so widespread that a whole lingo has sprung up to describe its tactics. Ringing up a T-bone ($13.99/lb) with a code for a cheap ($0.49/lb) variety of produce is “the banana trick.” If a can of Illy espresso leaves the conveyor belt without being scanned, that’s called “the pass around.” “The switcheroo” is more labor-intensive: Peel the sticker off something inexpensive and place it over the bar code of something pricey. Just make sure both items are about the same weight, to avoid triggering that pesky “unexpected item” alert in the bagging area.

How common are self-scanning scams? If anonymous online questionnaires are any indication, very common. When Voucher Codes Pro, a company that offers coupons to internet shoppers, surveyed 2,634 people, nearly 20 percent admitted to having stolen at the self-checkout in the past. More than half of those people said they gamed the system because detection by store security was unlikely. A 2015 study of self-checkouts with handheld scanners, conducted by criminologists at the University of Leicester, also found evidence of widespread theft. After auditing 1 million self-checkout transactions over the course of a year, totaling $21 million in sales, they found that nearly $850,000 worth of goods left the store without being scanned and paid for.

The Leicester researchers concluded that the ease of theft is likely inspiring people who might not otherwise steal to do so. Rather than walk into a store intending to take something, a shopper might, at the end of a trip, decide that a discount is in order. As one retail employee told the researchers, “People who traditionally don’t intend to steal [might realize that] … when I buy 20, I can get five for free.” The authors further proposed that retailers bore some blame for the problem. In their zeal to cut labor costs, the study said, supermarkets could be seen as having created “a crime-generating environment” that promotes profit “above social responsibility.”

Whether out of social responsibility or frustration with shrinkage, some retailers, including Albertsons, Big Y Supermarket, Pavilions, and Vons, have scaled back or eliminated self-scanning, at least in some stores. But others continue to add it. Worldwide, self-checkout terminals are expected to number 325,000 by 2019, up from 191,000 in 2013. In some places, meanwhile, the likelihood of being punished for petty shoplifting is decreasing. Even if a manager wants to press charges, many police departments can’t be bothered with supermarket theft. In 2012, for example, the Dallas Police Department enacted a new policy: Officers would no longer routinely respond to shoplifting calls for boosts amounting to less than $50. In 2015, the threshold was raised yet again, to $100.

Perhaps it’s not surprising that some people steal from machines more readily than from human cashiers. “Anyone who pays for more than half of their stuff in self checkout is a total moron,” reads one of the more militant comments in a Reddit discussion on the subject. “There is NO MORAL ISSUE with stealing from a store that forces you to use self checkout, period. THEY ARE CHARGING YOU TO WORK AT THEIR STORE.” Barbara Staib, the director of communications of the National Association for Shoplifting Prevention, believes that self-checkouts tempt people who are already predisposed to shoplifting, by allowing them to rationalize their behavior. “Most shoplifters are in fact otherwise law-abiding citizens. They would chase behind you to return the $20 bill you dropped, because you’re a person and you would miss that $20.” A robot cashier, though, changes the equation: It “gives the false impression of anonymity,” Staib says. “This apparently empowers people to shoplift.”

Which isn’t to say that all shoppers feel equally empowered. Frank Farley, a psychologist at Temple University, says that many supermarket thieves have what he calls Type-T (as in “thrill”) personalities: “Shopping can be quite boring because it’s such a routine, and this is a way to make the routine more interesting. These can be risk-taking, stimulation-seeking people.” According to this theory, some Type Ts become base jumpers or Mafia hit men, while others settle for swiping Brie and organic tomatoes from Safeway.

Rene Chun is a contributing editor at Wired.