The $2.5 Trillion Reason We Can’t Rely on Batteries to Clean up the Grid

Fluctuating solar and wind power require lots of energy storage, and lithium-ion batteries seem like the obvious choice—but they are far too expensive to play a major role. 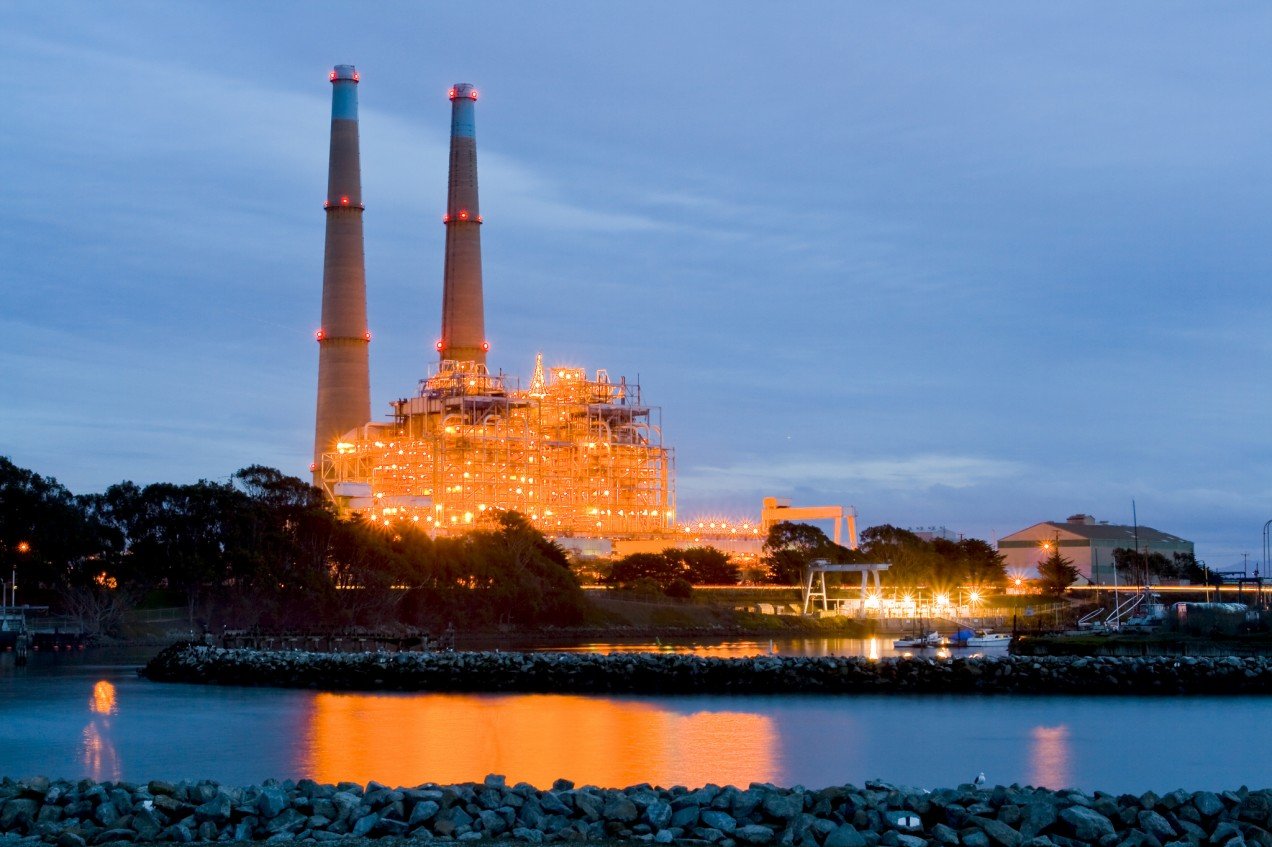 The Moss Landing Power Plant could soon be the site of the world’s largest lithium-ion battery project. Photo from Hugo | FLickr.

A pair of 500-foot smokestacks rise from a natural-gas power plant on the harbor of Moss Landing, California, casting an industrial pall over the pretty seaside town.

If state regulators sign off, however, it could be the site of the world’s largest lithium-ion battery project by late 2020, helping to balance fluctuating wind and solar energy on the California grid.

The 300-megawatt facility is one of four giant lithium-ion storage projects that Pacific Gas and Electric, California’s largest utility, asked the California Public Utilities Commission to approve in late June 2018. Collectively, they would add enough storage capacity to the grid to supply about 2,700 homes for a month (or to store about .0009 percent of the electricity the state uses each year).

The California projects are among a growing number of efforts around the world, including Tesla’s 100-megawatt battery array in South Australia, to build ever larger lithium-ion storage systems as prices decline and renewable generation increases. They’re fueling growing optimism that these giant batteries will allow wind and solar power to displace a growing share of fossil-fuel plants.

But there’s a problem with this rosy scenario. These batteries are far too expensive and don’t last nearly long enough, limiting the role they can play on the grid, experts say. If we plan to rely on them for massive amounts of storage as more renewables come online—rather than turning to a broader mix of low-carbon sources like nuclear and natural gas with carbon capture technology—we could be headed down a dangerously unaffordable path.

Today’s battery storage technology works best in a limited role, as a substitute for “peaking” power plants, according to a 2016 analysis by researchers at MIT and Argonne National Lab. These are smaller facilities, frequently fueled by natural gas today, that can afford to operate infrequently, firing up quickly when prices and demand are high.

Lithium-ion batteries could compete economically with these natural-gas peakers within the next five years, says Marco Ferrara, a cofounder of Form Energy, an MIT spinout developing grid storage batteries.

“The gas peaker business is pretty close to ending, and lithium-ion is a great replacement,” he says.

This peaker role is precisely the one that most of the new and forthcoming lithium-ion battery projects are designed to fill. Indeed, the California storage projects could eventually replace three natural-gas facilities in the region, two of which are peaker plants.

But much beyond this role, batteries run into real problems. The authors of the 2016 study found steeply diminishing returns when a lot of battery storage is added to the grid. They concluded that coupling battery storage with renewable plants is a “weak substitute” for large, flexible coal or natural-gas combined-cycle plants, the type that can be tapped at any time, run continuously, and vary output levels to meet shifting demand throughout the day.

Not only is lithium-ion technology too expensive for this role, but limited battery life means it’s not well suited to filling gaps during the days, weeks, and even months when wind and solar generation flags.

This problem is particularly acute in California, where both wind and solar fall off precipitously during the fall and winter months.

This leads to a critical problem: when renewables reach high levels on the grid, you need far, far more wind and solar plants to crank out enough excess power during peak times to keep the grid operating through those long seasonal dips, says Jesse Jenkins, a coauthor of the study and an energy systems researcher. That, in turn, requires banks upon banks of batteries that can store it all away until it’s needed.

And that ends up being astronomically expensive.

There are issues California can’t afford to ignore for long. The state is already on track to get 50 percent of its electricity from clean sources by 2020, and in August 2018 the legislature passed a bill that would require it to reach 100 percent by 2045. To complicate things, regulators also voted in January of that year to close the state’s last nuclear plant, a carbon-free source that provides 24 percent of PG&E’s energy. That will leave California heavily reliant on renewable sources to meet its goals.

The state currently has 150,000 megawatt-hours of energy storage in total. (That’s mainly pumped hydroelectric storage, with a small share of batteries.) 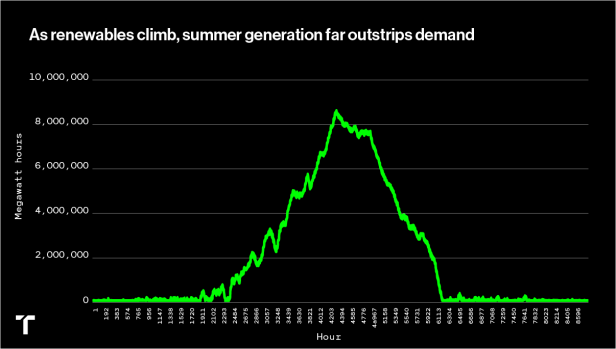 Building the level of renewable generation and storage necessary to reach the state’s goals would drive up costs exponentially, from $49 per megawatt-hour of generation at 50 percent to $1,612 at 100 percent.

And that's assuming lithium-ion batteries will cost roughly a third what they do now. 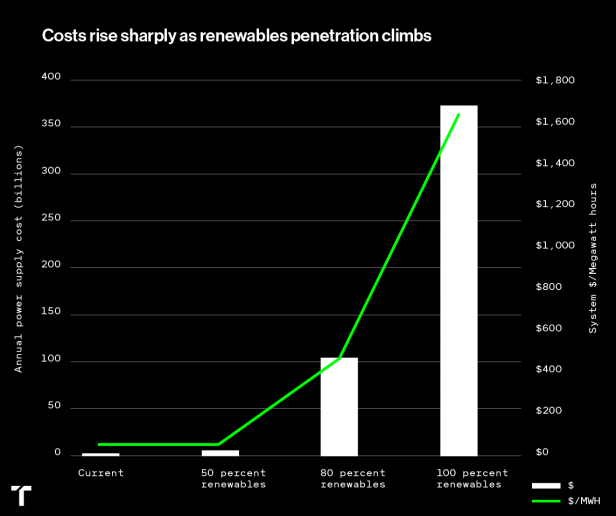 “The system becomes completely dominated by the cost of storage,” says Steve Brick, a senior advisor for the Clean Air Task Force. “You build this enormous storage machine that you fill up by midyear and then just dissipate it. It’s a massive capital investment that gets utilized very little.”

These forces would dramatically increase electricity costs for consumers.

“You have to pause and ask yourself: ‘Is there any way the public would stand for that?’” Brick says.

Similarly, a 2018 study in Energy & Environmental Science found that meeting 80 percent of US electricity demand with wind and solar would require either a nationwide high-speed transmission system, which can balance renewable generation over hundreds of miles, or 12 hours of electricity storage for the whole system (see “Relying on renewables alone significantly inflates the cost of overhauling energy”).

At current prices, a battery storage system of that size would cost more than $2.5 trillion.

Of course, cheaper and better grid storage is possible, and researchers and startups are exploring various possibilities. Form Energy, which has secured funding from Bill Gates’s Breakthrough Energy Ventures, is trying to develop aqueous sulfur flow batteries with far longer duration, at a fifth the cost where lithium-ion batteries are likely to land.

Ferrara’s modeling has found that such a battery could make it possible for renewables to provide 90 percent of electricity needs for most grids, for just marginally higher costs than today’s.

But it’s dangerous to bank on those kinds of battery breakthroughs—and even if Form Energy or some other company does pull it off, costs would still rise exponentially beyond the 90 percent threshold, Ferrara says.

“The risk,” Jenkins says, “is we drive up the cost of deep decarbonization in the power sector to the point where the public decides it’s simply unaffordable to continue toward zero carbon.”

Update: A chart was removed from this story because it incorrectly stated the level of renewables penetration on the electricity grid represented on the vertical axis.