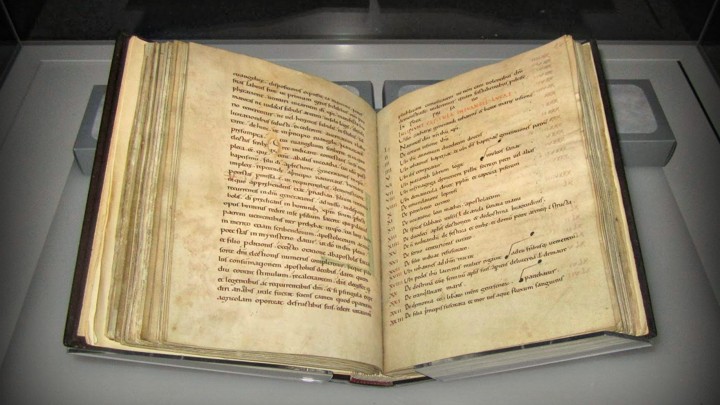 The York Gospels were assembled more than a thousand years ago. Bound in leather, illustrated, and illuminated, the book contains the four gospels of the Bible as well as land records and oaths taken by clergymen who read, rubbed, and kissed its pages over centuries. The Archbishops of York still swear their oaths on this book.

The York Gospels are also, quite literally, a bunch of old cow and sheep skins. Skin has DNA, and DNA has its own story to tell.

A group of archaeologists and geneticists in the United Kingdom have now analyzed the remarkably rich DNA reservoir of the York Gospels. They found DNA from humans who swore oaths on its pages and from bacteria likely originating on the hands and mouths of those humans. Best of all though, they found 1,000-year-old DNA from the cows and sheep whose skin became the parchment on which the book is written. 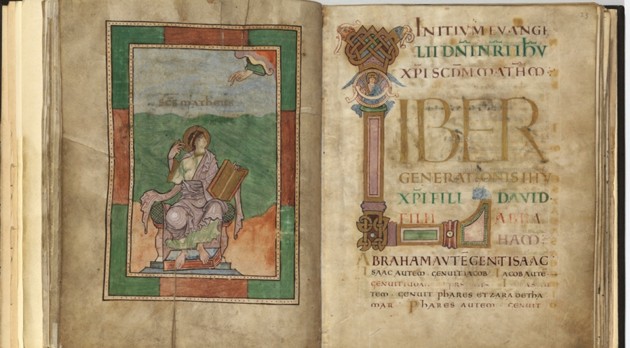 Illustrated page of the York Gospels. Photo from York Minster.

Remarkably, the authors say they extracted all this DNA without destroying even a tiny piece of parchment. All they needed were the crumbs from rubbing the book with erasers, which conservationists routinely use to clean manuscripts. The authors report their findings in a preprint that, as of this article's publication, has not yet been peer-reviewed, though they plan to submit it to a scientific journal.

If their technique works, it could revolutionize the use of parchment to study history. Every one of these books is a herd of animals. Using DNA, researchers might track how a disease changed the makeup of a herd or how the skin of sheep from one region moved to another medieval trade routes. It’s part of a growing movement to bring together scholars in the sciences and humanities to study medieval manuscripts.

Scientists have extracted DNA from parchment before, but this non-destructive technique expands the potential pool of research material. Archivists are loathe to allow researchers to cut off a piece of, say, the York Gospels, but some eraser crumbs? Sure. “That’s why it’s such an exciting breakthrough. It allows a lot of different manuscripts from a lot of different areas to be analyzed together,” says Bruce Holsinger, an English professor at the University of Virginia who is writing a book about parchment.

The idea to study parchment came to Matthew Collins, an archaeologist at the University of York, after a failed study in bones. A few years ago, he had a graduate student trying to extract ancient DNA from animal bones at an old Viking settlement. There were thousands of bones on the site, but only six that they tested yielded DNA—too few for any statistically significant results. “You can imagine the frustration,” says Collins.

So Collins got to thinking about archives full of old manuscripts. “You look at these shelves, and every one of them has a skin of an animal with a date written on it,” he says. Suddenly you have thousands of animals. And you didn’t even need to go out into the field and dig. When Collins and postdoctoral researcher Sarah Fiddyment first approached archives to collaborate though, they made the mistake of thinking like archaeologists used to routinely pulverizing bone for DNA analysis. “They told us we would not be allowed to sample the parchments. Matthew and I didn’t think of it,” says Fiddyment. She ended up shadowing conservationists for several weeks and learned about their eraser technique. White plastic erasers made by Staedtler turned out to be perfect for cleaning manuscripts and for collecting DNA.

Collins and Fiddyment had previously collaborated with Holsinger to use the eraser technique to study proteins from uterine vellum—so named because it is so thin that people thought that they were made from the skin of unborn livestock. Others, however suggested the skin came from different animals entirely, like squirrel or rabbit. The team published a study in 2015 analyzing proteins rubbed off of uterine vellum. They found that uterine vellum is indeed from calves, sheep, and goats, though not necessarily unborn ones.

With the York Gospels, Collins and Fiddyment went one step further to look for DNA with the eraser technique. They analyzed eraser dust from eight pages. Three of the samples yielded enough DNA to compare to modern cattle genomes, and the single most complete parchment genome was similar to modern Norwegian reds and Holsteins.

They also looked at the sex of the calves. Four of the five whose sex they could determine from DNA were female, which they found highly unusual if representative. Females are more valuable if you want to grow your herds, so why would you kill so many females to make parchment? Collins and Fiddyment consulted with Annelise Binois-Roman, a zooarchaeologist, who noted that a cattle plague swept through England in the years before the York Gospels were created. Perhaps those dead calves were salvaged to make parchment. Another colleague who specialized in the Anglo-Saxon era suggested maybe precious female calves were deliberately used because it is such an important book.

Collins and Fiddyment recognize that scientists alone can’t make sense of the DNA from parchment. They need historians and literary scholars and curators to interpret their findings. Since then, Collins has reached out to scholars and archivists far and wide to collect more DNA samples.

Timothy Stinson, an English professor at North Carolina State University, first wrote about studying DNA from parchment seven years ago. “I felt like the voice in the wilderness,” says Stinson. That’s changed now with the efforts of Collins and others. Stinson is interested in using DNA to study how the production of books changed over time. Early on, he says, manuscripts were likely made up of related animals from the same herd. But as cities like London and Paris grew, guilds sprung up to make books, bringing in parchment from all over.

Collins points out that medievalists studying copying errors in manuscripts have long used the same phylogenetic programs that evolutionary biologists use to study how DNA mutations appear over time. DNA analysis is simply a new way to read the hidden messages in parchment.