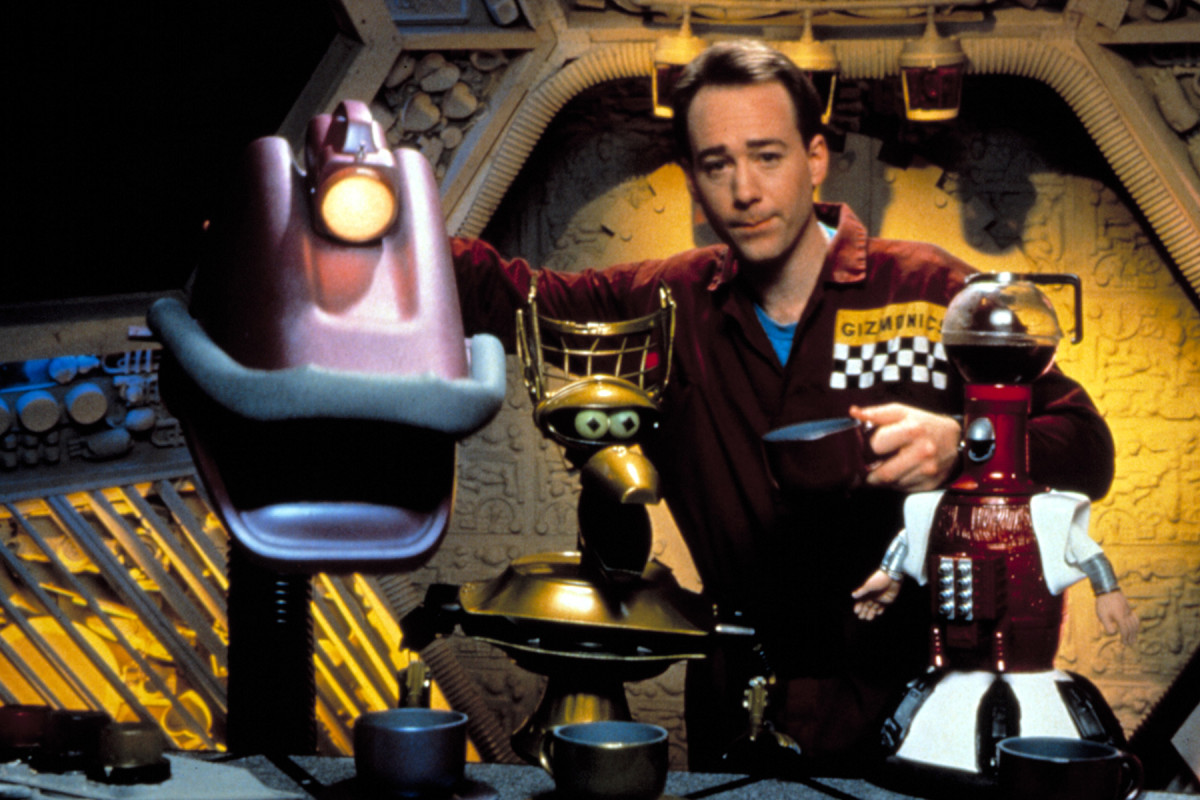 In the not too distant past — November 24th, 1988, A.D. — a moderately successful stand-up comedian named Joel Hodgson slipped on a jumpsuit. He then spent a few hours on a Minneapolis UHF station making fun of the terrible movies Invaders from the Deep and Revenge of the Mysterions from Mars, alongside a couple of handmade robot puppets. Only a handful of lucky Minnesotans were watching KTMA that Thanksgiving night. They all saw the birth of a pop culture phenomenon: a charmingly cheap-looking show that, no joke, changed television.

In the decades since Mystery Science Theater 3000 debuted, its popularity has waxed and waned. It’s been an underground sensation, passed around from fan to fan via old VHS tapes. For a time it was a TV tentpole, filling up hours of airtime every day on the fledgling version of Comedy Central. And then it spent about 15 years as a lost classic, exiled from the small screen, while its former writers and actors scattered into rival bands of riffers — sometimes as snippy towards each other in interviews as the cast of Teen-Age Crime Wave.

Right now, however, the state of the franchise is as strong as it’s ever been. In 2018, Netflix launched the second season of its revamped MST3K — still overseen by Hodgson, but with Jonah Ray hosting, and Hampton Yount and Baron Vaughn voicing the wisecracking sidekicks Crow T. Robot and Tom Servo. The home entertainment company Shout! Factory is still keeping as many of the show’s old episodes in circulation as possible and recently ran a pre-Thanksgiving marathon of fan-favorites. Dark Horse is publishing an MST miniseries, where Hodgson and his friends riff on public domain comic books. The cast is doing regular live tours, drawing fervent crowds. Life is good on the Satellite of Love.

And what’s more important is that the recent revival has been fresh enough to win new fans, while holding onto what made the original show special. Because here’s the thing about Mystery Science Theater 3000: It’s always had such a simple DIY feel that it looks like something anyone could do. But if you suffered through the dozens of bad MST3K ripoffs that sprang up in the 1990s, you know: It ain’t easy to make bad movies look good.

The brilliance of what Hodgson brought to KTMA back in 1988 — developed in concert with the original cast-members and writers J. Elvis Weinstein, Trace Beaulieu, and Jim Mallon — wasn’t just the idea of mocking crummy B-pictures. That had already been done, usually by local TV hosts who’d been rolling their eyes at schlocky horror flicks since the days of “Ghoulardi,” the early Sixties Cleveland character created by Ernie Anderson (the father of director Paul Thomas Anderson). In 1966, Woody Allen skewered an entire Japanese spy film by replacing the dialogue with his own quips about egg salad. MAD magazine trashed good and bad movies alike as far back as the 1950s.

No, what Hodgson and the early MST-ers did was to create a concept, carried through fairly faithfully by the hosts and cast members who followed. (A quick roll call: Michael J. Nelson, Kevin Murphy, Frank Conniff, Bill Corbett and Mary Jo Pehl). In that first season on Minneapolis television — and before the show was bought by the Comedy Channel — we were introduced to the character of Joel Robinson, a sleepy-voiced janitor stranded in outer space, forced by mad scientists to endure trash cinema. This wasn’t some Midwestern comedian hanging out in a TV studio with his smart-aleck-y pals. He was an industrious, optimistic everyman — “not too different from you or me” — who’d made his friends out of spare parts around his rocket-ship.

Why did this matter? Because when Joel and the ‘bots poked at the bargain-basement special effects and stiff acting in some long-forgotten hunk of junk like Time of the Apes or Manos: The Hands of Fate, they did it while playing fictional characters themselves, on a set that looked like it cost about $1.98. If MST3K has ever had an overarching theme, it’s this: Everything is artificial. If you look closely enough at any monster costume, literal or figurative, you can always spot the zipper.

It’s hard to overstate what a revelation this was back when the show became a basic cable staple, in the mid-Nineties. Critics point to the post- Sopranos 2000s as the medium’s second “golden age,” but the decade prior was in many ways more fun for couch potatoes. New channels were popping up seemingly every month, filled with “sure, what the hell” programming, seemingly pitched to audiences of hundreds. It was a rare pleasure to trudge across that wild west TV frontier and land on Mystery Science Theater: a warm-hearted, fiendishly smart two hours of arcane pop culture references and vintage drive-in cheese, designed to get viewers to appreciate the sublime ludicrousness of life and art.

The rest of TV quickly adopted MST3K‘s sense of the absurd, if not its jovial self-awareness. From sports highlights on ESPN to “Hey, remember the ’80s?” nostalgia-fests on VH1, nearly every video clip on television was being run through a filter of skepticism and irony. That’s not taking into account all the shows that ripped off Hodgson and company’s shtick more directly. Some did it pretty effectively, like MTV’s Beavis and Butt-Head, or Jason and Randy Sklar’s sports-themed Cheap Seats. And some … well, er, less so. 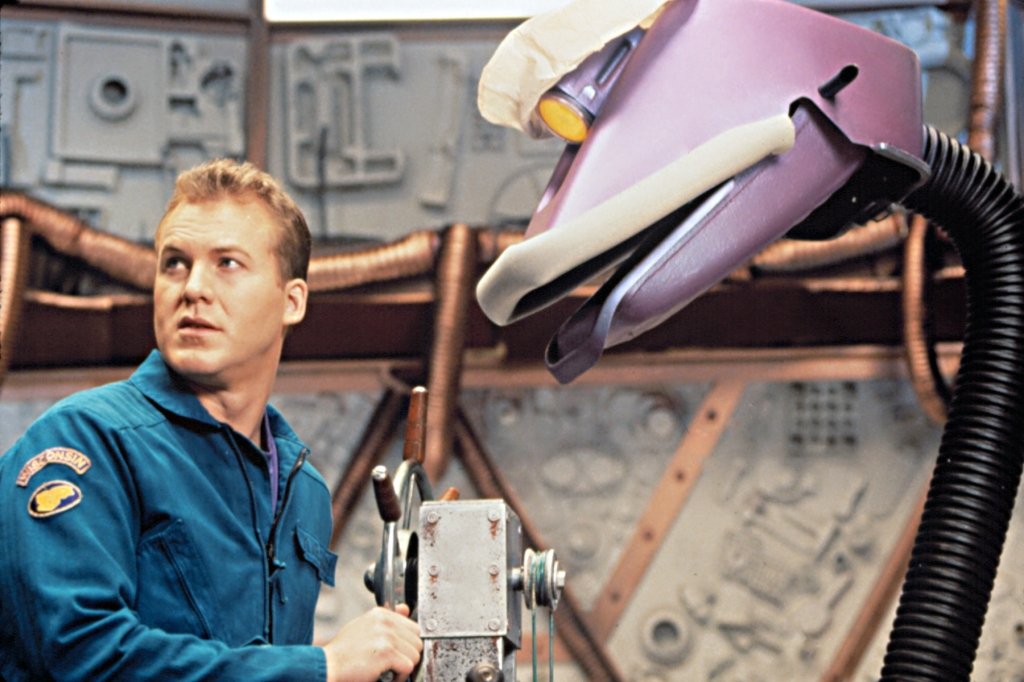 By the end of the Nineties, Hodgson had passed the hosting duties off to Nelson, and the series was eventually punted from Comedy Central to the Sci-Fi Channel. It faded from the zeitgeist, perhaps because its sense of humor had been so thoroughly absorbed into the culture. The show was quietly cancelled in 1999, and kept alive for the next 15 years or so primarily by steadfast fans, who kept buying the old episodes on home video. The alumni, meanwhile, scattered into similar projects, including the Film Crew, Cinematic Titanic and the successful, ongoing RiffTrax.

But even with a new set, a new theme song and Jonah replacing Joel, all it took was a few minutes of Netflix’s rebooted MST3K last spring to realize how much TV had missed this exact kind of comic sensibility: not just making fun of stuff, but doing so with wit, insight, expertise and even a little bit of humility.

This show’s original community of fans bonded through the Internet, right when bulletin boards and e-mail groups were becoming popular. And today’s social media sometimes resembles Mystery Science Theater 3000, in the way people turn photos into memes, or snarkily live-tweet through big events.

But from 1988 to now, this series has never really been set up to go viral. Even in its ’90s heyday, MST3K was just a little show from Minnesota, aimed at the handful of people in every TV market who’d find jokes about Morrissey, Gamera and the NBC Mystery Movie equally funny. It’s always been artisan-crafted, with a dorky kind of love: a snarky little show made by a few, for a few. The fact that it turned into the eye-roll heard around the world may be the biggest goof of them all.