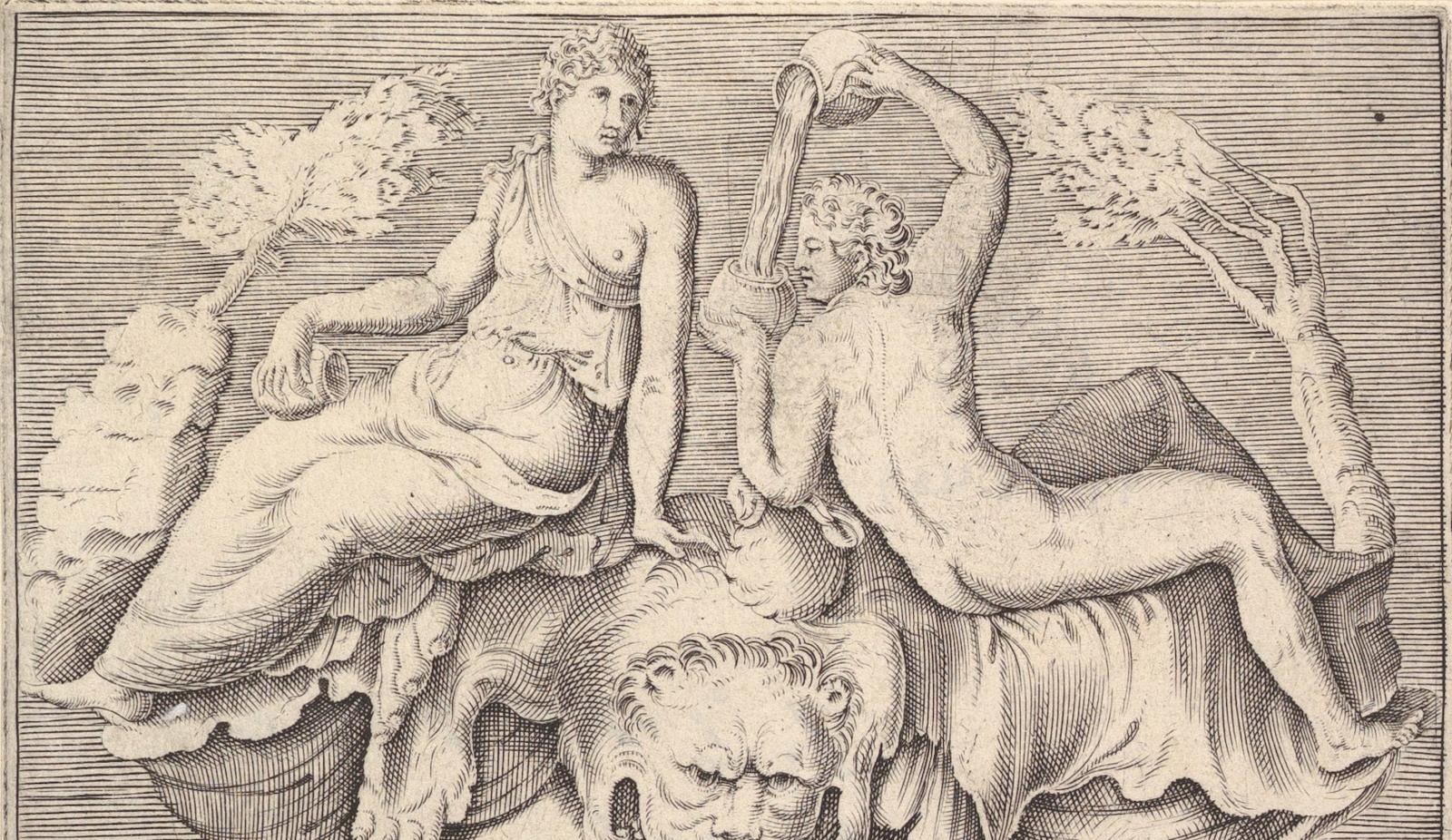 We all know it’s good to hydrate. Water can be so blah though. So when I’m trying to rehydrate after a long run in the summer heat, I tend to reach for an old-timey solution: The energy drink of ancient Rome.

The Romans were famed for their innovations in military logistics, which allowed them to extend their territory from Rome and its immediate surrounds to the whole Mediterranean and ultimately, with the establishment of the Roman Empire, virtually all of western Eurasia. But an army can’t win if it’s thirsty. Enter posca. This blend of vinegar and water—and possibly salt, herbs, and other stuff—holds a special place in beverage history thanks to its role as the Gatorade of the Roman army.

It’s possible posca was Greek in origin. Its name may have derived from the Greek word epoxos, which means “very sharp,” according to The Logistics of the Roman Army at War, by Jonathan Roth, historian at San Jose State University. But the beverage owes its fame to the small, but essential, part it played in the Roman army’s legendary efficiency. As early as the middle of the Roman Republic era (509-27 BCE), the military rationed posca to troops along with grains and, very occasionally, meat and cheese. That policy continued for centuries, well into the Roman Empire.

Roman soldiers did, of course, drink water. But historical records suggest that it wasn’t their beverage of choice. Consider what Plutarch wrote about how Cato the Elder, an officer during the Second Punic War (218-202 BCE), dealt with his thirst, according to Roth:

Water was what he drank on his campaigns, except that once in a while, in a raging thirst, he would call for vinegar, or when his strength was failing, would add a little wine.

Like Cato, Romans prized wine for its supposed health benefits, as Rod Phillips, a historian at Carleton University in Ottawa, writes in his book Wine: A Social and Cultural History of the Drink That Changed Our Lives. That made posca—which contained vinegar made from wine gone bad—vastly preferable to plain old H20. And wine, at the time, was plentiful. Rich Romans put back titanic volumes of it. As the reach of Roman imperialism spread throughout Europe, viticulture followed, which “gave their armies ready access to wine depots almost everywhere,” writes Phillips.

For military officials, off wine was a cheap source of calories to distribute in bulk. Diluting it with water to make posca “effectively doubled the volume of liquid ration given to the soldiers at a very low cost,” observes Roth.

There probably was something to the Romans’ belief in posca’s health benefits. The drink’s acidity and slight alcohol content would likely have neutralized bacteria, making it safer than drinking straight water. That could have been a big benefit, given that tainted water has been known to ravage armies more effectively than battle. Vinegar was also thought to help stave off that scourge of militaries throughout history—scurvy. (It doesn’t, as it turns out. But Ancient Romans were hardly the only ones to misplace faith in vinegar’s antiscorbutic virtues; as late as the mid-1800s, the US Army rationed apple cider vinegar to troops stationed in America’s southwest during the Mexican War, according to Roth.)

Mind you, military leaders and other elites generally didn’t deign to drink posca, which was more a drink of the common people, according to Pass the Garum, a fantastic blog dedicated to exploring Roman cuisine. When Roman emperor Hadrian wanted to slum it with his soldiers, this would have been his drink of choice. As Pass the Garum notes, the ancient historian Suetonius mentions vendors selling posca on the streets during the early years of the Roman Empire. Both among soldiers and common folk, posca continued to enjoy favor well into the Middle Ages, writes Andrew Dalby, a renowned historian of Greek and Roman cuisines, in Food in the Ancient World from A to Z.

Aside from slaking Roman thirst, posca’s other main claim to fame arises from its controversial cameo in the Bible. As Jesus Christ was suffering crucifixion—or possibly just before, at Golgotha—Roman soldiers offered him sips of the stuff from a sponge held aloft with a reed, according to Matthew 27:48. Depending on the interpretation, they did this either to help lessen his anguish or to needle him, notes Phillips. Whatever the case, Jesus wasn’t having it. “After tasting the posca, Christ refused to drink it,” writes Phillips.

So what did posca taste like? It’s a little hard to say. Due to its ubiquity in Roman literature of the day, we can safely conclude that it involved some ratio of water and red wine vinegar. But might it also have featured other flavors? History isn’t very helpful on that score, since no Roman posca recipes exist.

Thanks to Byzantine medical writers, however, we’re not totally in the dark. Aëtius of Amida and Paul of Aegina, both Byzantine Greek physicians of the sixth and seventh centuries, respectively, included recipes for a “palatable and laxative” posca that included cumin, fennel seed, celery seed, anise, thyme, and salt, according to another book by Dalby, Tastes of Byzantium: The Cuisine of a Legendary Empire. (However, Dalby complicates the matter somewhat by noting that the word they used, the Greek loanword phouska, may by that time have become a catchall term for second-rate wine substitutes.)

Adding herbs and sweeteners push posca in the direction of more familiar old school vinegar-based drinks like switchel, sekanjabin, and shrub. Throw in salt, and you have the combo of carbohydrates and sodium used in Gatorade and other modern sports drinks that help you recover the water and salts lost during exercise (or from simply sweating a lot). That makes sense: tromping around Europe and Asia Minor while saddled with armor and packs was undoubtedly sweaty work.

As for modern-day perspirers, why buy commercial sports drinks to slake your thirst when you can make the Gatorade of the ancients? While the scribes of antiquity haven’t left us a lot to go on, that hasn’t stopped food bloggers and Roman enthusiasts—and me—from trying. For anyone wanting to join in, here are a few recipes and guidelines to get your started. Make sure to use brewed vinegar only—red wine, black, balsamic, or apple cider, for example—and not distilled.

Though we have only the faintest hint that posca was sweetened, lots of recipes call for honey—like ”Sharp-but-sweet Posca” from Pass the Garum:

According to this recipe, honey should first be melted in the microwave for about 20 seconds, and then added to the water and stirred. Then add the vinegar.

If you want something a little “sharper,” this recipe, from the site Romae Vitam, calls for a much higher proportion of vinegar to water, as well as crushed coriander seeds:

The recipe calls for boiling the honey and letting it cool before combining. Also, make sure to strain out the crushed coriander before drinking.

My own posca–making is guided not by zeal for ancient Rome, but, rather, because I’m really thirsty. So while my concoction was inspired by what I learned from a lecture on ancient Roman cuisine a few years back, it has since strayed from the more authentic recipes listed above. I’ll still use diluted apple cider vinegar, if it’s handy, but I’ll sometimes go with homemade kombucha. And instead of honey, I prefer a glug of maple syrup (less messy). Also, usually, a little salt. And definitely a ton of ice. I’m not sure if you can still call that posca. But whatever it is, on a hot day, it sure hits the spot.