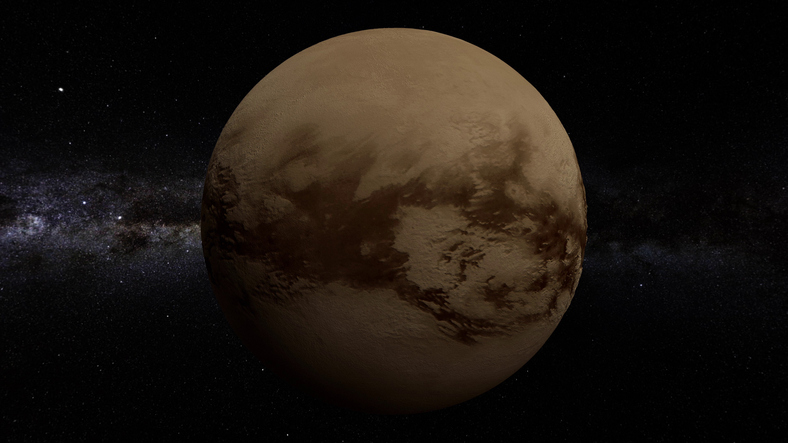 The idea of a human colony on Titan, a moon of Saturn, might sound crazy. Its temperature hovers at nearly 300° below zero Fahrenheit, and its skies rain methane and ethane that flow into hydrocarbon seas. Nevertheless, Titan could be the only place in the solar system where it makes sense to build a permanent, self-sufficient human settlement.

We reached this conclusion after looking at the planets in a new way: ecologically. We considered the habitat that human beings need and searched for those conditions in our celestial neighborhood.

Our colonization scenario, based on science, technology, politics and culture, presents a thought experiment for anyone who wants to think about the species’ distant future.

We expect human nature to stay the same. Human beings of the future will have the same drives and needs we have now. Practically speaking, their home must have abundant energy, livable temperatures and protection from the rigors of space, including cosmic radiation, which new research suggests is unavoidably dangerous for biological beings like us.

Up to now, most researchers have looked at the Moon or Mars as the next step for human habitation. These destinations have the dual advantages of proximity and of not being clearly unrealistic as choices for where we should go. That second characteristic is lacking at the other bodies near us in the inner solar system, Mercury and Venus.

Mercury is too close to the sun, with temperature extremes and other physical conditions that seem hardly survivable. Venus’s atmosphere is poisonous, crushingly heavy and furnace-hot, due to a run-away greenhouse effect. It might be possible to live suspended by balloons high in Venus’s atmosphere, but we can’t see how such a habitation would ever be self-sustaining.

But although the Moon and Mars look like comparatively reasonable destinations, they also have a deal-breaking problem. Neither is protected by a magnetosphere or atmosphere. Galactic Cosmic Rays, the energetic particles from distant supernovae, bombard the surfaces of the Moon and Mars, and people can’t live long-term under the assault of GCRs.

The cancer-causing potential of this powerful radiation has long been known, although it remains poorly quantified. But research in the last two years has added a potentially more serious hazard: brain damage. GCRs include particles such as iron nuclei traveling at close to the speed of light that destroy brain tissue.

Exposing mice to this radiation at levels similar to those found in space caused brain damage and loss of cognitive abilities, according to a study published last year by Vipan K. Parihar and colleagues in Science Advances. That research suggests we aren’t ready to send astronauts to Mars for a visit, much less to live there.

On Earth, we are shielded from GCRs by water in the atmosphere. But it takes two meters of water to block half of the GCRs present in unprotected space. Practically, a Moon or Mars settlement would have to be built underground to be safe from this radiation.

Underground shelter is hard to build and not flexible or easy to expand. Settlers would need enormous excavations for room to supply all their needs for food, manufacturing and daily life. We ask why they would go to that trouble. We can live underground on Earth. What’s the advantage to doing so on Mars?

Beyond Mars, the next potential home is among the moons of Jupiter and Saturn. There are dozens of choices among them, but the winner is obvious. Titan is the most Earthlike body other than our original home.

Titan is the only other body in the solar system with liquid on the surface, with its lakes of methane and ethane that look startlingly like water bodies on Earth. It rains methane on Titan, occasionally filling swamps. Dunes of solid hydrocarbons look remarkably like Earth’s sand dunes.

For protection from radiation, Titan has a nitrogen atmosphere 50 percent thicker than Earth’s. Saturn’s magnetosphere also provides shelter. On the surface, vast quantities of hydrocarbons in solid and liquid form lie ready to be used for energy. Although the atmosphere lacks oxygen, water ice just below the surface could be used to provide oxygen for breathing and to combust hydrocarbons as fuel.

It’s cold on Titan, at -180°C (-291°F), but thanks to its thick atmosphere, residents wouldn’t need pressure suits—just warm clothing and respirators. Housing could be made of plastic produced from the unlimited resources harvested on the surface, and could consist of domes inflated by warm oxygen and nitrogen. The ease of construction would allow huge indoor spaces.

Titanians (as we call them) wouldn’t have to spend all their time inside. The recreational opportunities on Titan are unique. For example, you could fly. The weak gravity—similar to the Moon’s—combined with the thick atmosphere would allow individuals to aviate with wings on their backs. If the wings fall off, no worry, landing will be easy. Terminal velocity on Titan is a tenth that found on the Earth.

How will we get there? Currently, we can’t. Unfortunately, we probably can’t get to Mars safely, either, without faster propulsion to limit the time in space and associated GCR dosage before astronauts are unduly harmed. We will need faster propulsion to Mars or Titan. For Titan, much faster, as the trip currently takes seven years.

There is no quick way to move off the Earth. We will have to solve our problems here. But if our species continues to invest in the pure science of space exploration and the stretch technology needed to preserve human health in space, people will eventually live on Titan.

Charles Wohlforth is the author of more than ten previous books. He writes a column for Alaska Dispatch News, hosts a weekly interview program for Alaska public radio stations (where he lives), and has won the Los Angeles Times Book Prize for Science and Technology, among many other awards. He is co-author of Beyond Earth: Our Path to a New Home in the Planets.

Amanda R. Hendrix is a planetary scientist who worked for twelve years at NASA's Jet Propulsion Laboratory. She has been a scientific investigator on the Galileo and Lunar Reconnaissance missions, a principal investigator on NASA research and Hubble Space Telescope observing programs, and the author of many scientific papers. As an investigator on the Cassini mission to Saturn, she has focused her research on the moons of Saturn. She is co-author of Beyond Earth: Our Path to a New Home in the Planets.