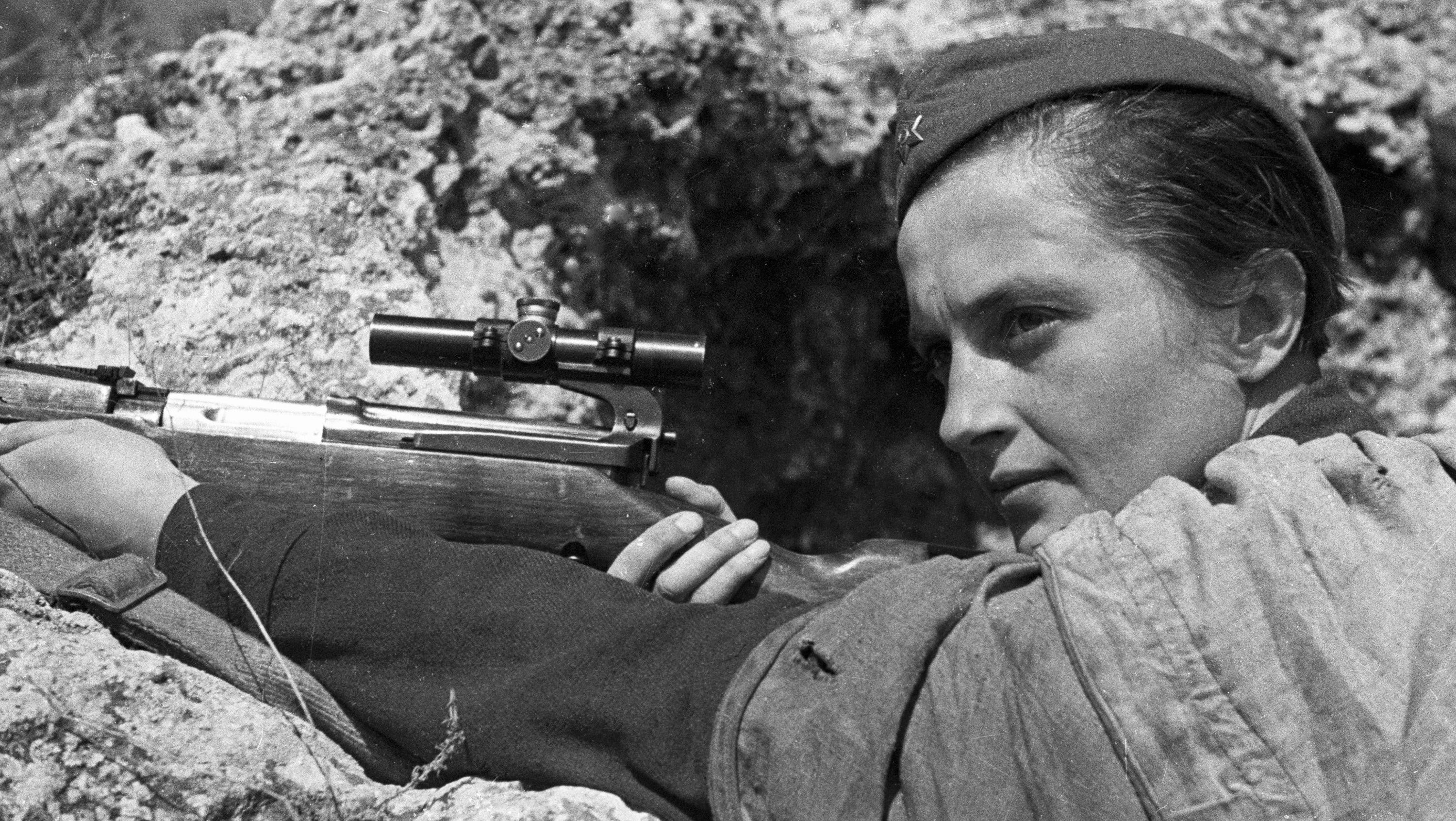 For Lyudmila Pavlichenko, killing Nazis wasn't complicated. “The only feeling I have is the great satisfaction a hunter feels who has killed a beast of prey,” she once said of her job.

But Pavlichenko wasn’t just any soldier: She was the most successful female sniper in history, and one of the most successful snipers, period. As a member of the Soviet Army during World War II, she killed 309 Nazis, earning the sobriquet “Lady Death.” She also became a public figure who toured North America and Britain, befriended Eleanor Roosevelt, and spoke candidly about gender equality—especially when she was fed up with American reporters.

Pavlichenko was born in 1916 in Bila Tserkva, a village near Kiev, Ukraine, then part of the Russian Empire. As a girl, she was boisterous and competitive. In her early teens, she moved with her parents—a government employee and teacher—to Kiev. After hearing her neighbor’s son brag about his shooting skills, she joined a local shooting club. “I set out to show that a girl could do as well [as him],” she later explained. "So I practiced a lot."

Besides being an amateur sharpshooter, the teenaged Pavlichenko worked in an arms factory. At around 16 years old, she married a doctor and gave birth to a son, Rostislav, but the marriage was short-lived. She then went on to study history at Kiev University starting in 1937, while also enrolling in a sniper school on the side.

When German forces invaded the Soviet Union in 1941, Pavlichenko felt called to action. She left school, hoping to volunteer for the Red Army’s 25th Rifle Division.

The only problem? She was a woman. At the time, women in the Soviet military were largely relegated to support roles—not combat ones [PDF].

Army leaders initially wanted Pavlichenko to be a nurse. After some pleading with a registrar, she was able to join as a sniper because of her training. However, a lack of guns meant that she at first helped dig trenches instead. She wrote in her memoirs, “It was very frustrating to have to observe the course of battle with just a single grenade in one’s hand." Eventually, a colleague wounded by a shell splinter passed his rifle over to Pavlichenko when he was too injured to use it. Weeks later, she shot two Romanian soldiers a quarter-mile away, which served as a “baptism of fire,” she later wrote, and led to her being accepted by her comrades as a full-fledged sniper. 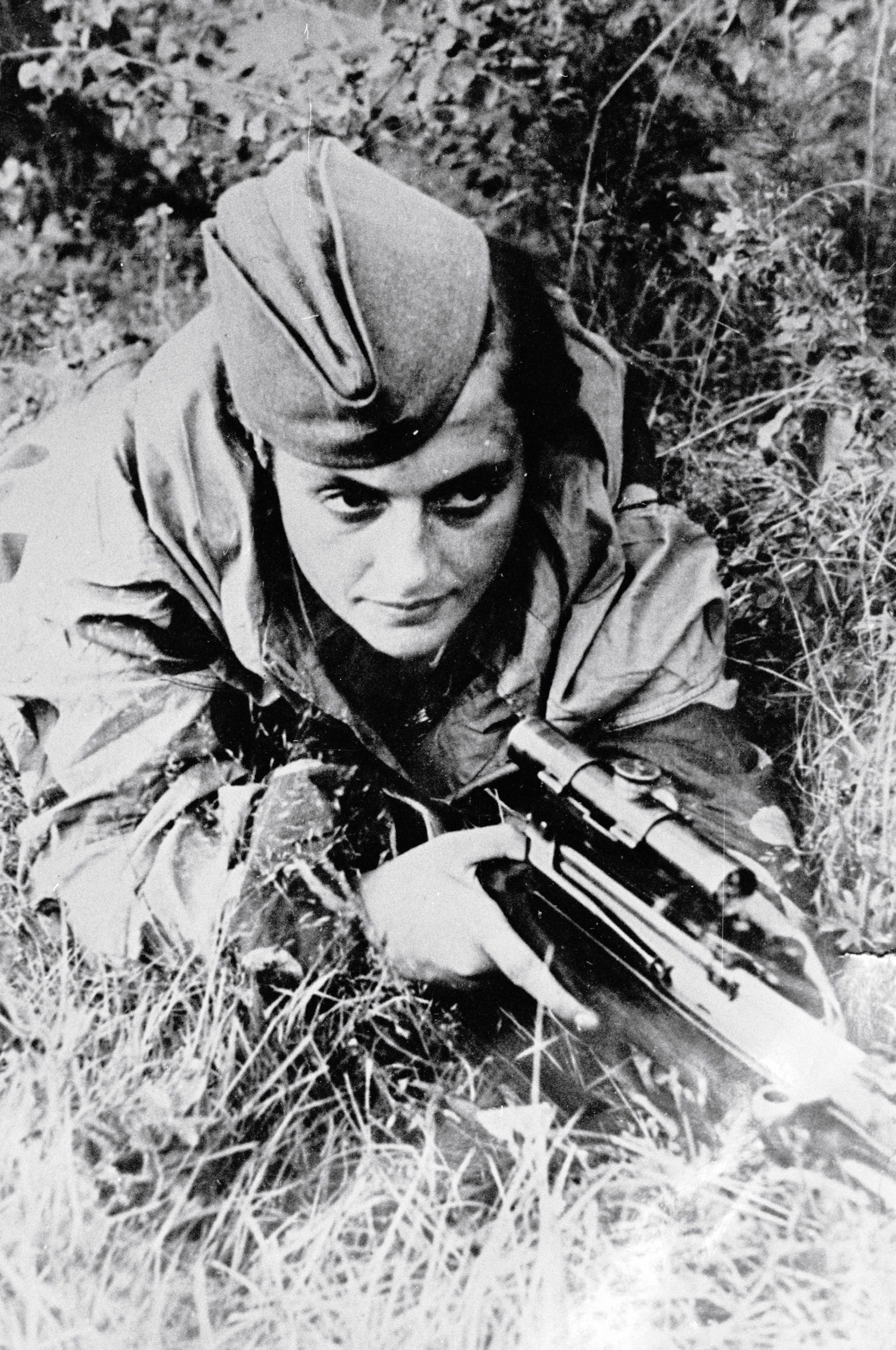 Pavlichenko became one of over 2000 female Soviet sharpshooters who eventually fought in World War II (although female soldiers were still just 2 percent of the Red Army's total number). Pavlichenko killed hundreds of enemy combatants in Odessa, Moldavia, and Sevastopol. “We mowed down the Hitlerites like ripe grain,” she later said. Eventually promoted to sergeant and lieutenant, she spent months in battle killing scouts, officers, and at least 36 enemy snipers from Germany and other Axis countries.

Pavlichenko was so determined that even shell shock and multiple wounds from enemy fire didn’t deter her. Neither did bribes: After German soldiers learned of her shooting prowess, they tried to turn her against her country by offering chocolate and the promise of an officer rank in the German army. When she didn’t fall for it, Germans threatened to tear her into 309 pieces, her number of confirmed kills. The offer reportedly delighted her, since it meant her tally was widely known—yet her resolve didn't waver.

But after shrapnel hit Pavlichenko in the face in the summer of 1942, Red Army leaders withdrew her from combat and assigned her to train novice snipers. She was also given another role: wartime propagandist.

In late 1942, Pavlichenko traveled to the United States to galvanize support for sending more American troops to Europe. One of her first stops was the White House, which she became the first Soviet citizen to visit. She met with President Franklin Roosevelt and Eleanor Roosevelt, and the sniper and the first lady hit it off: Eleanor Roosevelt invited Pavlichenko on a tour of the country to talk about her experiences in combat.

Speaking through a translator to crowds that sometimes swelled to thousands, Pavlichenko discussed her childhood and triumphs as a sniper. “I am 25 years old and I have killed 309 fascist occupants by now,” she reportedly told one group in Chicago. “Don’t you think, gentlemen, that you have been hiding behind my back for too long?”

The American press, however, had trouble taking Pavlichenko seriously. They described her as a "Girl Sniper," and focused on her physical appearance, disparaging her bulky green army uniform and minimal makeup. Instead of asking about her skills with a rifle, reporters questioned her about nail polish, hair styles, and whether female Soviet soldiers could wear makeup in battle. “There is no rule against it,” she replied. “But who has time to think of her shiny nose when a battle is going on?”

Pavlichenko soon tired of the questions. As she explained to one interviewer:

"I am amazed at the kind of questions put to me by the women press correspondents in Washington. Don't they know there is a war? They asked me silly questions such as do I use powder and rouge and nail polish and do I curl my hair? One reporter even criticized the length of the skirt of my uniform, saying that in America women wear shorter skirts and besides my uniform made me look fat. This made me angry. I wear my uniform with honor. It has the Order of Lenin on it. It has been covered with blood in battle. It is plain to see that with American women what is important is whether they wear silk underwear under their uniforms. What the uniform stands for, they have yet to learn."

Pavlichenko eventually returned to the Soviet Union to continue training other snipers, after other publicity stops in Canada and Great Britain. Despite a relatively privileged position as a heroic figure there, she struggled with the lasting effects of her injuries and personal demons: alcoholism, what today we might call post-traumatic stress disorder, and the memories of a romantic partner who had died on the frontlines, in her arms, in early 1942.

When the war ended, Pavlichenko earned her history degree from Kiev University and worked as a historian for the Soviet Navy. In 1957, she reunited with Eleanor Roosevelt when the former first lady visited Moscow and stopped by Pavlichenko’s apartment. While the pair were at first reserved in the presence of a Soviet minder, Pavlichenko soon made an excuse to pull Roosevelt into another room. She reportedly threw her arms around the former first lady while the pair reminisced about their experiences 15 years earlier.

Pavlichenko died in Moscow in 1974, at age 58. The Soviet Union honored her with multiple medals and two postage stamps. A joint Ukrainian-Russian feature film, Battle for Sevastopol, was made about her in 2015, and her memoirs, Lady Death: The Memoirs of Stalin's Sniper, was published in English for the first time earlier this year. Pavlichenko also lives on in Woody Guthrie's 1942 song, “Miss Pavlichenko.” It includes the lyrics:

Miss Pavlichenko's well-known to fame
Russia's your country, fighting is your game
The world will always love you for all time to come,
300 Nazis fell by your gun.

Suzanne Raga loves writing about everything from history, business, music, and literature to personal finance, life hacks, food trends, and health. A graduate of Princeton University, she is the author of You Rock! How To Be A Star Student & Still Have Fun, curator of the indie music blog After The Show, and a whiz at Latin Scrabble.