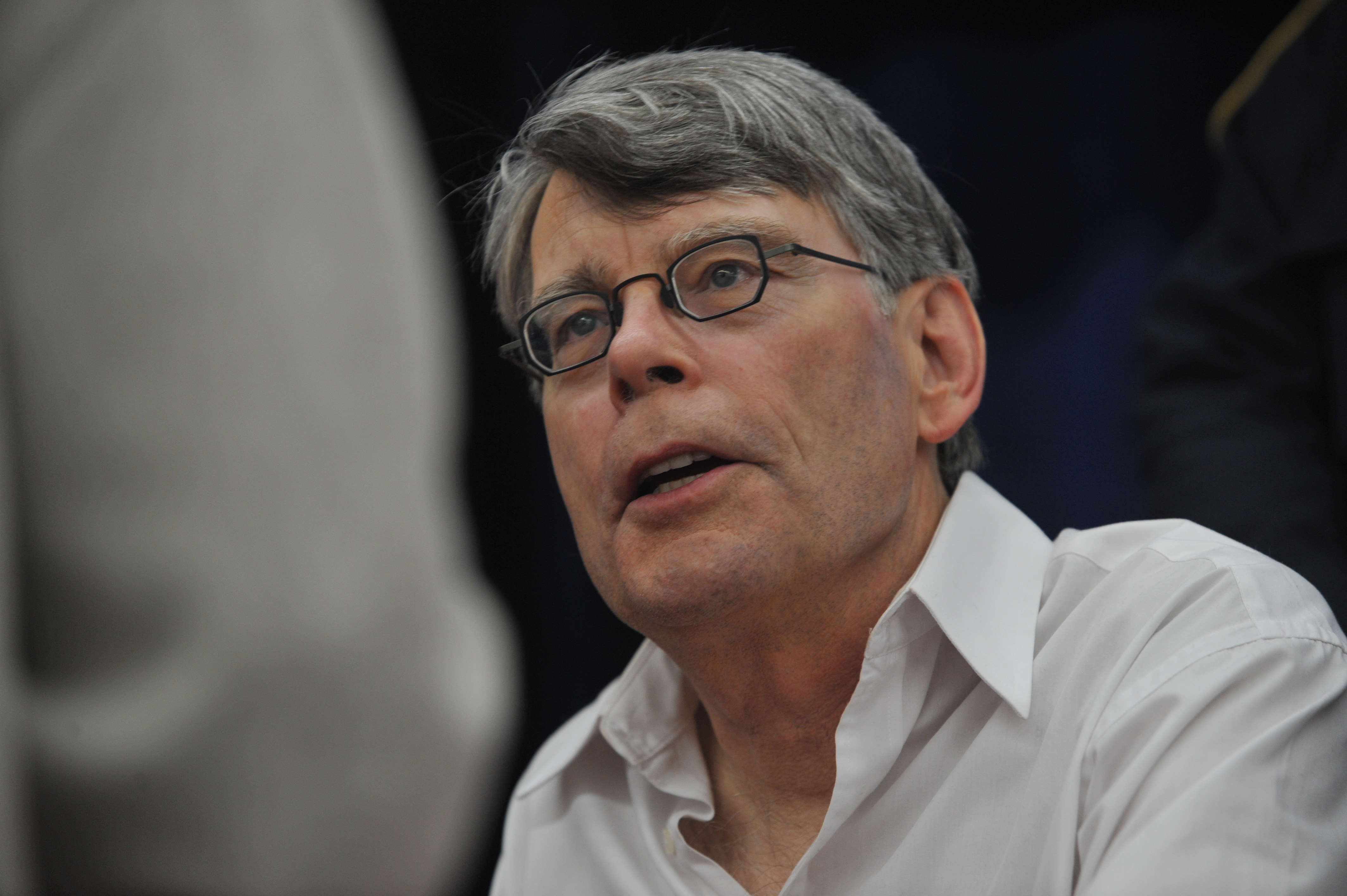 Steve Brown was working his shift at Olsson’s Bookstore in Washington, D.C. in the spring of 1985 when he heard his name come over the store intercom. There was a call waiting for him.

King was referring to Richard Bachman, the alias he had adopted eight years earlier and carried through four books (Rage, The Long Walk, Roadwork, and The Running Man). The titles had floated in and out of the market in relative obscurity, drawing only passing suspicion that their true author was one of the most well-known and successful writers of the 20th century. New American Library (NAL), Bachman's publisher, refuted any suggestion that the author was fictional.

But Brown—a bookstore clerk, writer, and fanzine publisher—had read enough King novels to recognize that Bachman’s latest book, Thinner, was unequivocally a King work. After some additional investigation, Brown wrote a letter to King’s agent sharing his discovery and asked how they’d like to proceed. It marked the beginning of the end for Bachman, who would soon perish, King wrote, owing to “cancer of the pseudonym.”

By 1977, King had completed his transformation from nearly-destitute English teacher to cultural phenomenon. His first three books—Carrie, Salem’s Lot, and The Shining—were bestsellers, with The Stand nearing completion. Feature film and paperback rights for his work added to his newfound wealth.

King’s professional problem, if he could be said to have one, was that he secreted words like most people produce sweat. His novels were swelling in size—The Stand’s first publication saw it cut from 1152 to 752 pages—and he was eager to publish more than the industry standard of one book a year.

Editors balked: Multiple releases would glut the market, they insisted, undercutting the King brand and cannibalizing his sales.

Tired of arguing his point, King decided to submit one of his earlier manuscripts to his paperback publisher, New American Library, with the caveat that it would be distributed under a pen name. NAL editor Elaine Koster agreed to an impressive veil of secrecy, including keeping most NAL employees and even their CEO in the dark about their newly-signed author.

Beyond circumventing the antiquated thinking about being too prolific, King had an alternative motivation for pursuing a pseudonym. He had long wondered if his work could be successful outside of the notoriety he had developed over the years. Getting It On, a long-finished book about a student who takes his high school class hostage, would receive little publicity and would essentially be left to flourish or perish on its own merits. “I wanted it to go out there and either find an audience or just disappear quietly,” King told The Washington Post in 1985.

The first stumbling block was King’s preferred alias: Guy Pillsbury. Pillsbury was the name of King’s maternal grandfather, but when Getting It On began to circulate around the NAL offices, some people became aware of the connection to King. He pulled the manuscript, retitled it Rage, and had better luck flying under the radar.

When it was time for the book to go to press, King received a call asking about a pen name. According to King, a Bachman Turner Overdrive record was playing and a Richard Stark novel was on his desk. Stark was the pen name for writer Donald E. Westlake—hence “Richard Bachman.”

The publication of Rage in 1977 was followed by The Long Walk in 1979, Roadwork in 1981, and The Running Man in 1982. Sales were modest at best, and reader reaction was tepid: King recalled getting 50 or 60 fan letters a week for himself and perhaps two a month for Bachman. Still, he seemed to relish having an alter ego and delighted in inventing a morbid biography for him. In his mind, Bachman was a chicken farmer in New Hampshire who wrote novels at night, happily married but facially deformed owing to a past illness—hence, poor Bachman would be unavailable for interviews.

King’s cover endured for a surprisingly long period. But the 1985 release of Thinner would usher in fresh suspicion about Bachman. Unlike the other four novels, Thinner was contemporary King, a hardcover written with the knowledge it was a “Bachman book” and perhaps more self-conscious about its attempt at misdirection. And unlike early-period Bachman, which often featured nihilistic but grounded scenarios—a walking marathon that ends in death, or a game show where prisoners can earn their freedom—Thinner took on more of a horror trope, with a robust lawyer cursed to lose weight by a vengeful gypsy until he’s practically nothing but skin and bone.

When Stephen Brown obtained an advance copy at Olsson’s, he had an innate belief he was reading a King novel. To confirm his suspicions, he visited the Library of Congress to examine the copyrights for each Bachman title. All but one were registered to Kirby McCauley, King’s agent. The remaining title, Rage, was registered to King himself. It was the smoking gun.

Brown wrote McCauley with the evidence and requested his advice on what to do with the information he had gathered. He didn’t plan on “outing” King, but, by this time, the King-as-Bachman theory had been gathering steam, with both King and NAL getting more inquiries from journalists. That’s when King decided to phone Brown directly and offer him an exclusive interview revealing himself as Bachman.

With King’s permission, NAL began circulating Thinner with a credit that read, “Stephen King writing as Richard Bachman.” The following year, they reissued the previous Bachman titles in a volume titled The Bachman Books, with sales more in line with what publishers would expect from a King title. Film producers who had optioned The Running Man were ecstatic, since they had gotten a bargain Bachman price on the rights for a King product.

The only person unhappy with the reveal was the author himself. Bachman, King felt, was on the cusp of developing his own following and his own identity, and he had fully intended to continue publishing under the pen name. (King had planned on making Misery a Bachman tome.) But Thinner had been too much of a King book, and there is evidence King himself may been giving himself too much rope with which to hang his alias. One of the characters in Thinner muses that “You were starting to sound like a Stephen King novel for a while there.”

In his introduction to The Bachman Books, King hinted that more “undiscovered” Bachman manuscripts may be lurking. In 1996, he published The Regulators as a “posthumous” Bachman novel, and did the same with Blaze, a 2007 paperback that was originally written in the 1970s. King’s 1991 novel, The Dark Half, was dedicated to his pen name. It was about an author with a pseudonym who takes on a life of his own.

Ultimately, Bachman may have outlived his usefulness. In the 1980s, publishers seemed to relax on their shop-worn edicts over publication frequency, and King once published four titles (all under his own name) in a calendar year.

Whether Bachman could have one day rivaled King in popularity will have to remain a mystery. During his short time in publishing, he would sometimes get favorable notices that hinted at a bright future. “This is what Stephen King would write like if Stephen King could really write,” remarked one reviewer.

Jake Rossen is a writer, editor, and curator of fine comic strip art. (Except Garfield.) His byline can be found within the pages of The New York Times, ESPN.com, Wired.com and a slew of health and fitness-related publications.