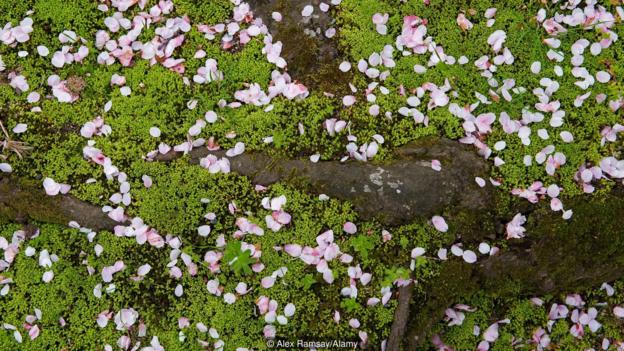 The appreciation of transient beauty is at the heart of some of Japan’s most simple pleasures, such as the annual celebration of cherry blossoms. Credit: Alex Ramsay/Alamy.

Withdrawing my hands reluctantly from the slowly spinning bowl, I watched its uneven sides slowly come to a stop, wishing I could straighten them out just a little more. I was in the ancient pottery town of Hagi in rural Yamaguchi, Japan, and while I trusted the potter who convinced me to let it be, I can’t say I understood his motives.

Smiling, he announced, “it has wabi-sabi” – and whisked the bowl away for firing. I sat, contemplating the lack of symmetry and wondering what on Earth he meant.

As it turns out, failing to understand this phrase is not unusual. A key part of the Japanese Aesthetic – the ancient ideals that still govern the norms on taste and beauty in Japan – wabi-sabi is not only untranslatable, but also considered undefinable in Japanese culture. Often muttered in moments of profound appreciation, and almost always followed by the word muri! (impossible!) when asked to expand, the phrase offers an unusual way to view the world. 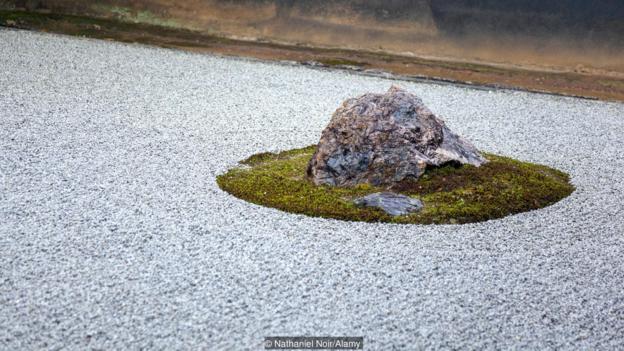 Wabi-sabi is a key part of the Japanese Aesthetic. Credit: Nathaniel Noir/Alamy.

Originating in Taoism during China’s Song dynasty (960-1279) before being passed onto Zen Buddhism, wabi-sabi was originally seen as an austere, restrained form of appreciation. Today it encapsulates a more relaxed acceptance of transience, nature and melancholy, favouring the imperfect and incomplete in everything, from architecture to pottery to flower arranging.

Wabi, which roughly means ‘the elegant beauty of humble simplicity’, and sabi, which means ‘the passing of time and subsequent deterioration’, were combined to form a sense unique to Japan and pivotal to Japanese culture. But just as Buddhist monks believed that words were the enemy of understanding, this description can only scratch the surface of the topic.

Prof Tanehisa Otabe, professor at Tokyo University’s Institute of Aesthetics, suggests that the ancient art of wabi-cha, a style of tea ceremony established by tea masters Murata Juko and Sen no Rikyu from the late 15th to 16th Centuries forms a good introduction to wabi-sabi. By choosing common Japanese pottery over the popular (and technically perfect) imported Chinese examples, the men challenged the rules of beauty. Without bright colours and ornate designs to rely on as signifiers of accepted beauty, guests were encouraged to study subtle colours and textures that would previously have been overlooked.

As to why they sought imperfect, rustic pieces, Prof Otabe explained that “wabi-sabi leaves something unfinished or incomplete for the play of imagination”. This opportunity to actively engage with something considered to be wabi-sabi achieves three things: an awareness of the natural forces involved in the creation of the piece; an acceptance of the power of nature; and an abandonment of dualism – the belief that we are separate from our surroundings.

Combined, these experiences allow the viewer to see themselves as part of the natural world, no longer separated by societal constructs and instead at the mercy of natural timelines. Rather than seeing dents or uneven shapes as mistakes, they are viewed as a creation of nature – much as moss would grow on an uneven wall or a tree would curve in the wind.

“The aesthetics of wabi-sabi opened our eyes to everyday life and gave us a method of handling what is common in an uncommon, aesthetic way,” Prof Otabe said, highlighting the importance of acceptance in Japanese culture, a society forced to contend with devastating natural disasters on a semi-regular basis. Rather than casting nature solely as a dangerous and destructive force, it helps frame it as a source of beauty, to be appreciated on the smallest of levels. It becomes a provider of colours, designs and patterns, a source of inspiration, and a force to work alongside, rather than against. 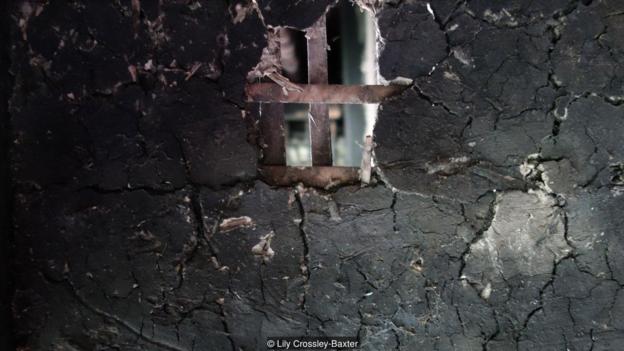 Originating in Taoism before being passed onto Zen Buddhism, wabi-sabi encapsulates a more relaxed acceptance of transience, nature and melancholy. Credit: Lily Crossley-Baxter.

It is the inevitable mortality embound in nature, however, that is key to a true understanding of wabi-sabi. As author Andrew Juniper notes in his book Wabi Sabi: The Japanese Art of Impermanence, “It… uses the uncompromising touch of mortality to focus the mind on the exquisite transient beauty to be found in all things impermanent”. Alone, natural patterns are merely pretty, but in understanding their context as transient items that highlight our own awareness of impermanence and death, they become profound.

This idea brought to mind a story a Japanese colleague told me when we discussed wabi-sabi. Visiting Kyoto as a teenager, she had hurried through the grounds of Ginkakuji, a wooden Zen temple with quiet gardens, eager to see the more famous Kinkakuji, an ornate temple covered in gold leaf and perched above a reflective pond. Bright, stunning and glamorous, it lived up to her expectations, a far more impressive beauty than its traditional sister temple.

A few decades later, however, she returned to find the gold garish and, while it was certainly eye-catching, there was little beyond the immediate gratification of the gold leaf. Ginkakuji, however, offered a new fascination: the aged wood held countless hues and patterns, while the Zen moss and dry sand gardens offered a frame for nature’s many shapes. Unable to appreciate these things as a child, she had grown to see the ravages of time as a deeper source of beauty, far greater than a two-dimensional flash of gold.

Intrigued by the personal element of this appreciation, I contacted artist Kazunori Hamana, whose unique pieces are often considered to have an element of wabi-sabi. As we walked through the grounds of his tumbledown farmhouse in the rural idyll of Izumi in Chiba prefecture, he agreed with the need for age.

“You have different feelings when you’re young – everything new is good, but you start to see history develop like a story. After you’ve grown up, you see so many stories, from your family to nature: everything growing and dying and you understand the concept more than you did as a child.”

This appreciation for the marks of time is a key feature in Hamana’s works, which he chooses to display in derelict Japanese farmhouses. Explaining that the wooden doorframes have been blackened by years of smoke from the irori (an indoor hearth) and pointing out how the mud walls have started crumbling, he says he feels the history of the houses lend a fitting backdrop to his pieces, avoiding the cold duality of impersonal white gallery spaces.

Creating sculptures with natural clay from Shiga, an area with a reputation for high-quality clay and a long history of pottery making, Hamana embraces the important wabi-sabi concept of mutual creation between man and nature.

“I design a little at first, but clay is a natural thing, so it changes. I don’t want to fight with nature so I follow the shape, I accept it,” he said.

Not only does he allow nature to aid in the shaping of his pieces, but in their later appearance too. In an overgrown bamboo forest in the farmhouse grounds, he showed me the pieces he’d chosen to leave outside, buried in the undergrowth for years at a time. There they’ve developed unique patterns from extreme temperatures and surrounding plant life, as well as being occasionally broken. Studying them closely, I found that this simply added to the beauty of each piece, with the cracks offering another opportunity to add to the story. 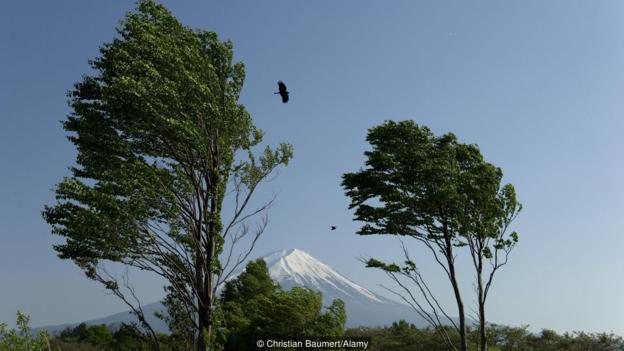 Rather than seeing dents or uneven shapes as mistakes, in Japan they are viewed as a creation of nature. Credit: Christian Baumert/Alamy.

Often associated with wabi-sabi is the art of kintsugi – a method of repairing broken pottery using gold or lacquer. The process highlights, rather than conceals, the cracks, allowing them to become a part of the piece, too. When his daughter accidentally broke some of his work, Hamana said, laughing, he decided to leave the pieces outside for a few years, allowing them to be coloured and shaped by nature. When it was repaired by a local kintsugi specialist, the different colours created a contrast so subtle, so uneven, that could never have been intentionally created. Embracing the effects of nature and allowing family history to be visible in a piece creates a unique value for something which would, in many cultures, simply be discarded as worthless.

Prioritising flawlessness and infallibility, the ideal of perfection creates not only unachievable standards, but misguided ones

In fact, the term ‘perfect’, which stems from the Latin perfectus, meaning complete, has been placed on an undeserved pedestal in many cultures, especially the West. Prioritising flawlessness and infallibility, the ideal of perfection creates not only unachievable standards, but misguided ones. In Taoism, since no further growth or development can take place, perfection is considered equivalent to death. While we strive to create perfect things and then struggle to preserve them, we deny their very purpose and subsequently lose the joys of change and growth.

Although seemingly abstract, this appreciation of transient beauty can be found at the heart of some of Japan’s most simple pleasures. Hanami, the annual celebration of cherry blossoms, involves parties and picnics, boat rides and festivals, all beneath the often already-falling petals, considered as beautiful in their haphazard patterns on the floor as they are on the branches. The pure acceptance of a fleeting beauty that would garner no more than a few photos in the West is something of an inspiration. While the appreciation may be tinged with melancholy, its only lesson is to enjoy the moments as they come, without expectations.

The dents and scratches we bear are all reminders of experience, and to erase them would be to ignore the complexities of life. By retaining the imperfect, repairing the broken and learning to find beauty in flaws – rather than in spite of them – Japan’s ability to cope with the natural disasters it so often faces is strengthened. When my bowl from Hagi arrived in the post months later, its uneven edges were no longer a defect, but instead a welcome reminder that life is not perfect, and nor should I try to make it so.