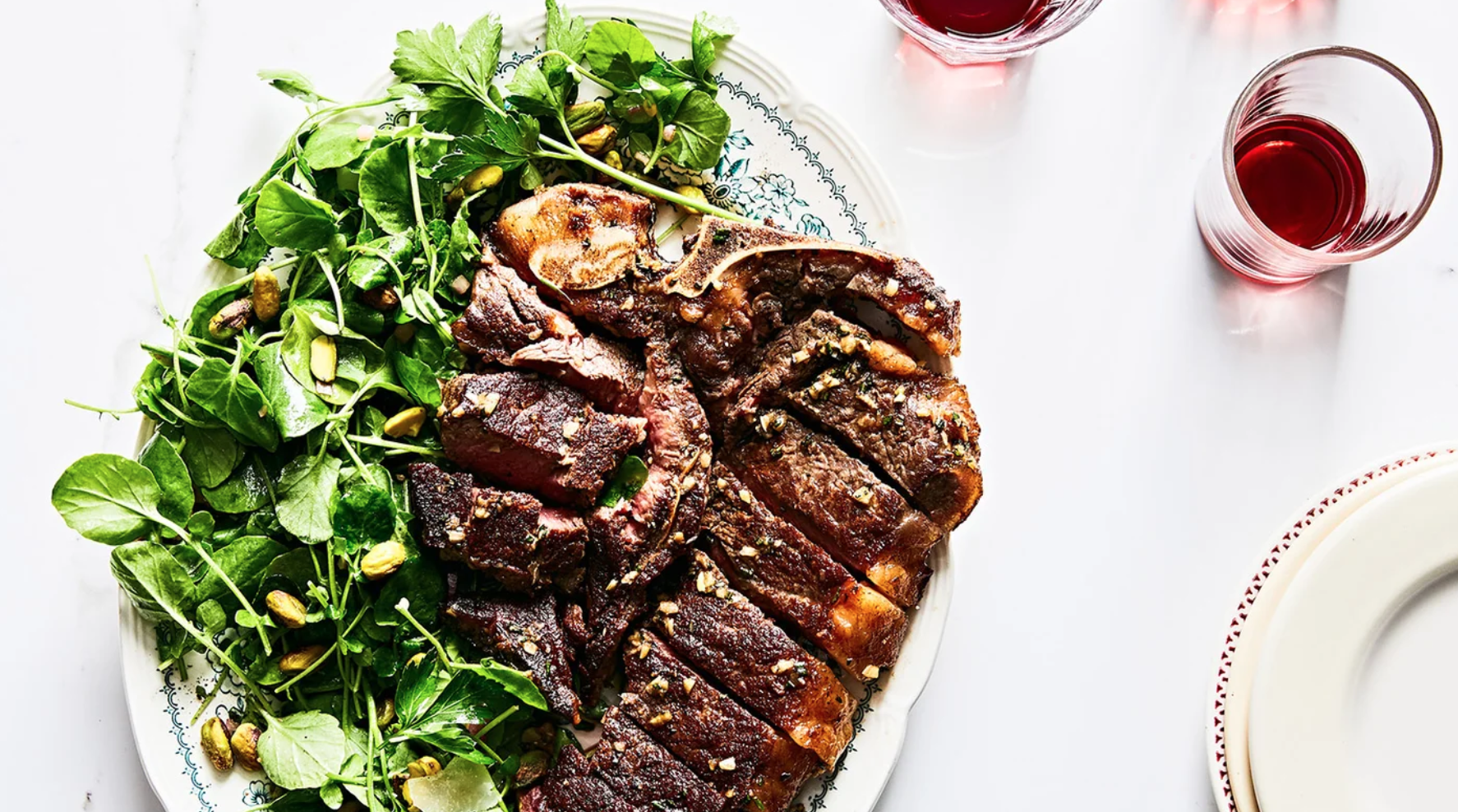 In America, steakhouse culture is increasingly one in which the cooks are rewarded for going big and brash. There are flashes of fire. Streaks of grease. And hulking butter-topped cuts bubbling under the broiler. But to make an incredible steak, less can often be more. Such is the philosophy surrounding bistecca alla Fiorentina, the famous bone-in steak of Tuscany, Italy.

To say you don’t need to travel to Italy to have a great steak would be an understatement. First, most regions in Italy barely offer beef on the menu. And even where they do, you’ll almost never see a restaurant serve an individual cut of steak to an individual diner. Steaks are more often served family-style, and many dishes forego steak in favor of ground meat, organs, or lean cuts braised until tender.

While farmers in an abundance of regions may have traditionally kept a small herd of cattle for farm work and fertilization, it is mostly the breeds of the north—largely from Piemonte and Tuscany—that give steak any status in Italy. One of the most sought after by locals and visitors alike is bistecca alla Fiorentina, the simple, Florentine-style T-bone or porterhouse steak hard-seared on the outside and cooked to a ruby-red rare on the inside. Some chefs are so rigid about its simplicity that they don’t even season the meat before it goes on the grill, only slicking it with a little olive oil, often some rosemary, and a shower of sea salt after it comes off the fire.

Usually rather enormous, a few inches thick, and two-plus pounds, bistecca in Tuscany has long been made from the Chianina, a robust and flavorful breed of cows that has been raised in this region as well as Umbria and Lazio since the mid-19th century. The horned gray cows are named for Tuscany’s Val di Chiana (or Valdichiana), which lies between the plains of Orvieto and Arezzo. But, maybe even more than the breed used, the cut of steak and the fact that it’s aged for at least two weeks have become the most distinguishing characteristics of the bistecca. Most often a porterhouse, it is a bone-in, T-bone-style cut that includes both a hefty piece of the top loin well as a tenderloin, separated by a bone and surrounded by a layer of pristine white fat.

When replicating a bistecca alla Fiorentina at home, you can cook the steak over a charcoal or wood fire, and to great results. But I find it equally satisfying and, actually, easier on the stovetop, where steady, high heat and a cast-iron skillet allow you to sear the steak to an impressive browned crust—sometimes one more even than you’d get on a grill—while retaining its juicy red center. Being in the kitchen also allows you to keep your seasonings even closer at hand, ready for slathering on the meat just as it comes off the heat.

While everyone seems to debate the proper seasonings for bistecca, you can’t go wrong with the trifecta of salt, oil, and rosemary used by many of the local cooks. I like to take the seasoning up an easy but powerful notch by adding raw garlic and smashed, oil-packed anchovies to the mix. Both are seasonings used widely in Tuscany, and—though not always included in the quintessential bistecca preparation—they provide a complexity of flavor that truly makes for one of the best steaks I know how to cook.

Here’s how to knock the homemade version out of the park. 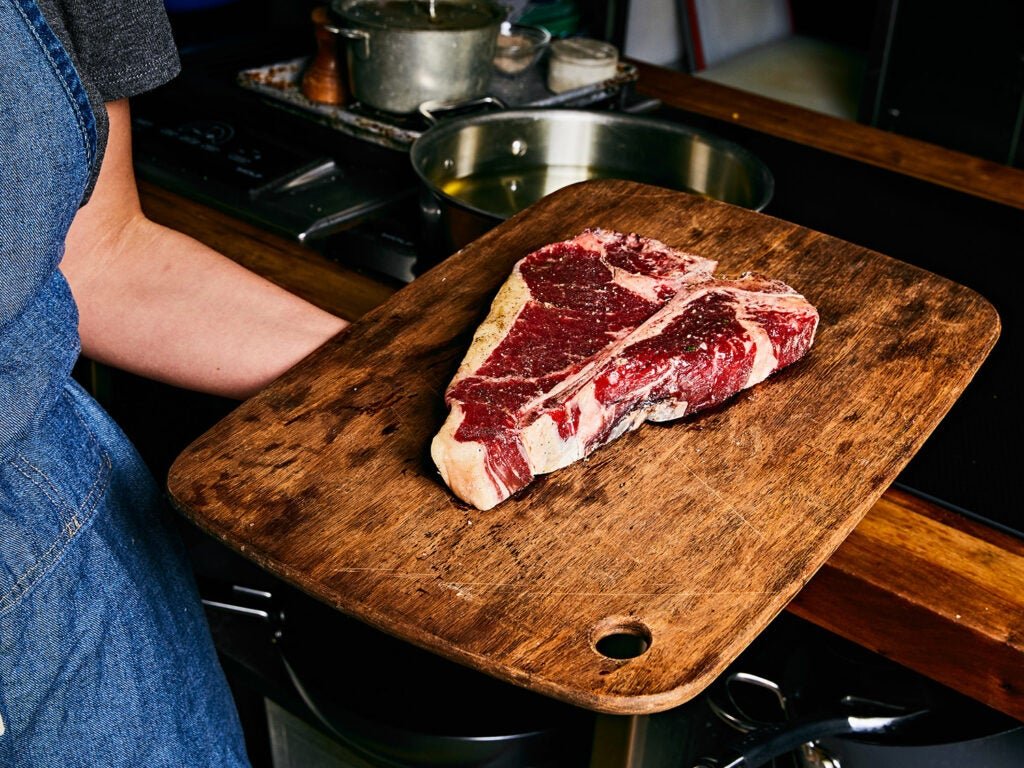 In Italy, bistecca alla Fiorentina is usually a dish to share. You can split it between two, but often—especially among the mix of courses including antipasti and primi—you’ll see bistecca shared among a few. My version of the dish, meant to be more manageable in size for an everyday meal or just a duo of diners, uses just one and a half pounds of meat and bone total and is around one inch thick or slightly more—which cuts down on the cooking time and doesn’t require the use of the oven to finish cooking the interior. If you do opt for a larger, thicker cut, give the steak a few extra minutes in the pan to guarantee a good ratio of sear to center. 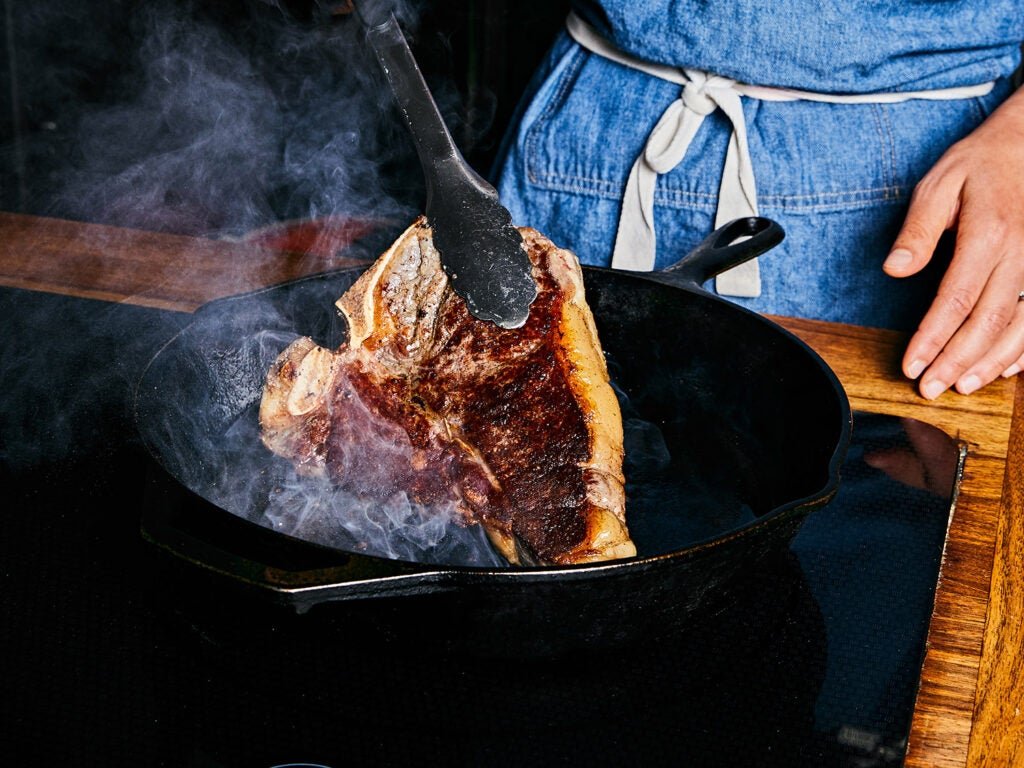 Give It a Hard Sear

Applying a balanced but intense heat is everything when it comes to achieving the proper crusty exterior on bistecca. You want a thick skillet that can retain heat extremely well, such as cast iron, and to get it smoking hot just before adding the steak. Bringing the meat to room temperature before you begin cooking will also help keep the pan from cooling down when the two come in contact, and resisting shifting or moving the steak while it is cooking will help you create a deeper, more even sear. 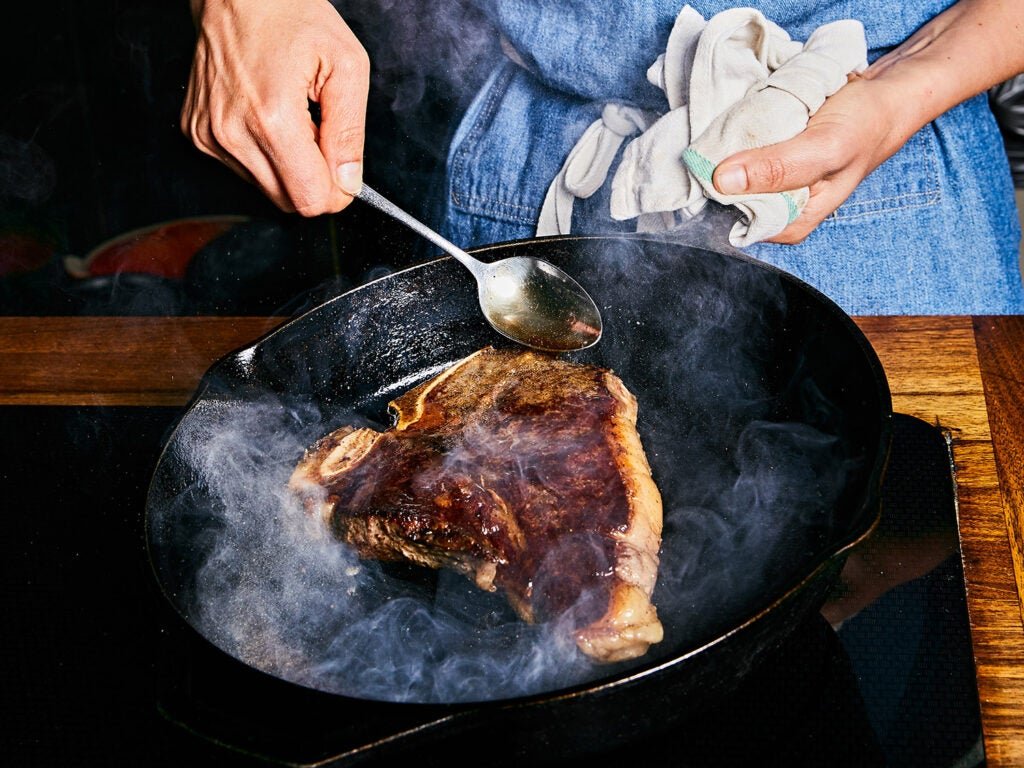 For even browning, spoon those precious juices over the steak on repeat. Jenny Huang

Once the steak is seared and flipped, you can baste it with hot fat from the pan if needed to brown any lighter patches. Using a kitchen towel or oven mitt if desired, tilt the skillet slightly to pool the fat and juices to one side. Then, using a large spoon, scoop up some of the fat from the pan and run it over the top of the light patches repeatedly. When in doubt, sear and baste the steak more rather than less: It’s very difficult to burn a steak of this size in a pan (in other words, don’t be afraid), and a bistecca without the proper char just isn’t the same. 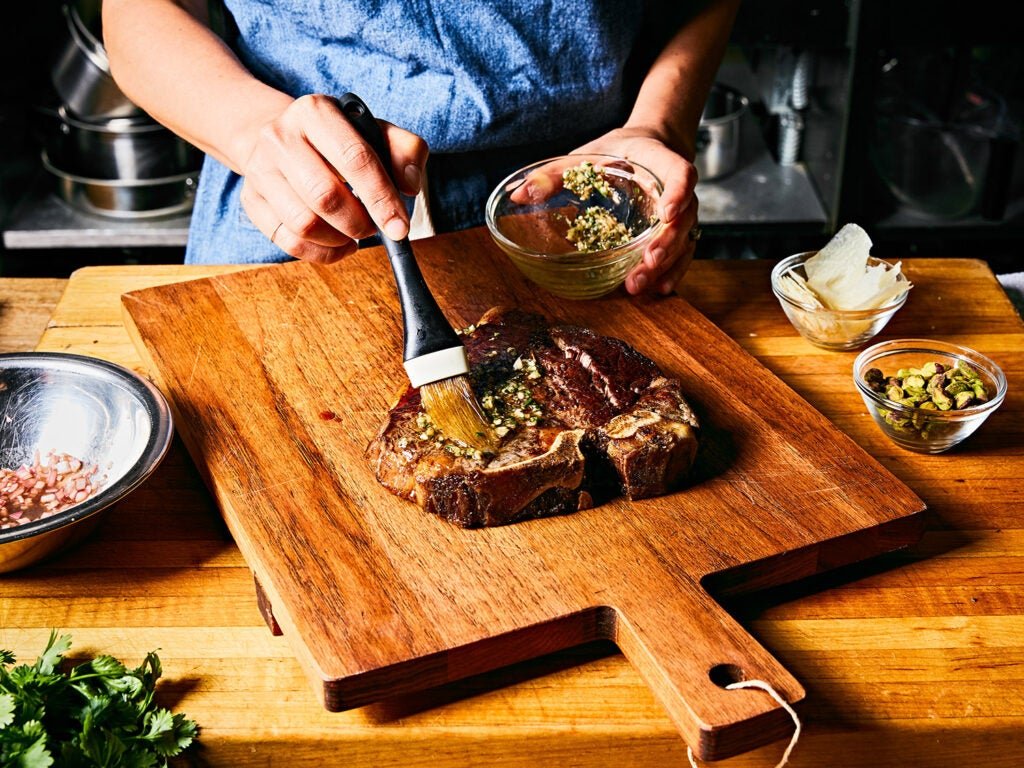 Break the seared steak all over with the umami-rich seasoning. Jenny Huang

Since there aren’t many seasonings to fuss with in this dish, the details of how and when you add each of them are what tend to matter more. Because solid particles like those from the garlic and rosemary would burn in the skillet during the searing process, you want to reserve them for brushing on the hot surface of the meat after it comes out of the pan. (This still allows the garlic and rosemary to be heated slightly, releasing their aromas and somewhat but not excessively taming their raw intensity.) Before cooking, season the meat heavily with a medium-grain salt such as kosher salt before setting it out to come to room temperature, then brush it lightly with some of the oil from the anchovies to begin imparting the fish’s umami flavors.