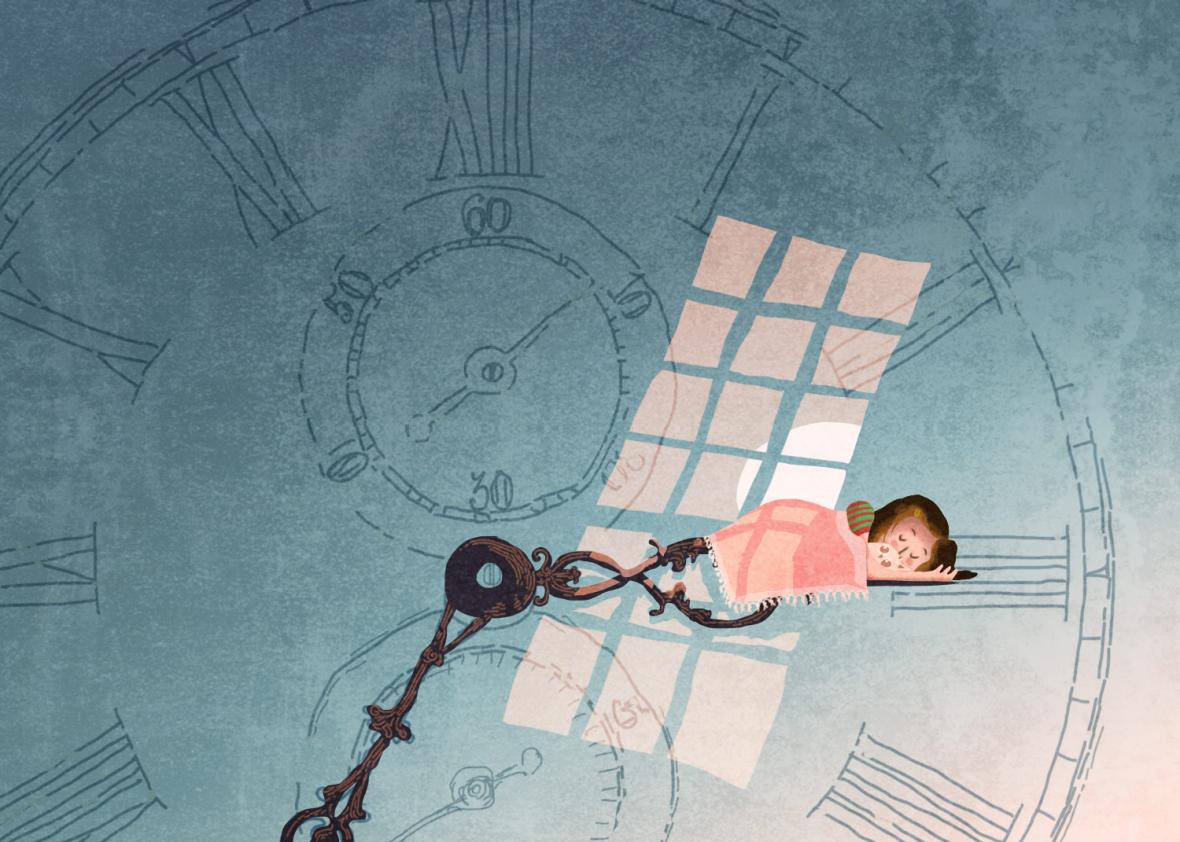 In bed before the sun sets. Illustration by Natalie Matthews-Ramo.

Every summer I undergo my annual metamorphosis into the monster of a parent who drags her kids away from barbecues and outdoor concerts an hour before other parents do. Yup, I make my almost 2-year-old and 5-year-old go to bed at 7 and 7:30 p.m., respectively. I know—you think I’m rigid, no fun, that I’m denying my kids a joyful childhood because they rarely get to frolic outside at dusk. I get a lot of crap for it. “Can’t you just … ?” My friends ask. No. I’m sorry, no, I can’t.

That’s because my kids are happier and more fun to be around when I stick with a consistent and early bedtime. And ever since I’ve started looking at the science, I’ve become only more convinced that the earlier you say night-night, the better. Research consistently shows that putting kids to bed early is beneficial for their physical, emotional, and cognitive development. Not only do kids tend to sleep more when the lights go out sooner, but they also may get a greater proportion of restorative sleep, too. Early kid bedtimes are also great for parental sanity. Sipping a glass of wine in silence? Snuggling up with your spouse to watch a grown-up movie for once? It’s really quite lovely.

Before we go on, let me say two things: First, I know super early bedtimes may not be possible with some families’ schedules. More on that later. Second, I don’t mean to preach, because I certainly have made a lot of mistakes with my kids’ sleep habits, but this is one thing I somehow got right, and now I’m a believer.

OK, let’s start with a troubling fact: Many kids these days don’t get enough sleep. According to surveys conducted by the National Sleep Foundation, about 30 percent of kids under 11, and more than half of teenagers, get less sleep at night than is recommended. And although many sleep experts suggest that young kids go to bed between 6 and 8 p.m., half of American toddlers and preschoolers, and 64 percent of kids in first through fifth grades, go to bed after 9 p.m.

Studies have shown that what time a child goes to bed is closely linked to how much he or she sleeps. But it’s more complicated than assuming that kids who go to bed 20 minutes earlier fall asleep 20 minutes earlier—and thus get 20 additional minutes of sleep. Paradoxically, multiple studies have found that kids who go to bed later take longer to fall asleep than kids who go to sleep earlier; they also wake up more frequently in the middle of the night, then don’t sleep late enough to make up for their deficit. One study reported that adolescents with a parent-set bedtime of 10 p.m. or earlier slept, on average, 40 minutes more each night than those told to be in bed by midnight; toddlers with a bedtime before 9 p.m. slept 78 minutes more than those with a later bedtime. And lest you think that kids who go to bed early are simply the ones who need more sleep, and that if you put your kid to bed an hour early he’ll just wake up an hour early, consider these experimental findings: When researchers asked parents to put their 7- to 11-year-olds to bed an hour earlier than usual for five straight nights, the kids slept an average of 27 minutes more each night.

But an early bedtime may have benefits beyond its direct impact on sleep duration. Indeed, “when a child sleeps is probably as important or maybe more important as how much,” explains pediatrician Marc Weissbluth, author of the best-selling book Healthy Sleep Habits, Happy Child. That’s because the sleep that happens earlier in the night tends to be more restorative than sleep that takes place later at night and in the early morning. So putting your kid to bed early may ensure that a higher proportion of her sleep is the extra-restful kind.

And well-rested kids behave quite differently than sleep-deprived kids. In that same interventional study I mentioned earlier, the 7- to 11-year-olds who were put to bed an hour earlier for five nights were rated by their teachers (who didn’t know that they’d gotten more sleep) as being less irritable and impulsive than usual. A similar study found that four nights of going to sleep an hour earlier made 8- to 12-year-olds more even-keeled and boosted their short-term memory, working memory, and attention skills compared with kids who had their bedtimes shifted later by an hour. Another study found that 2-year-olds who had early bedtimes were, at age 8, 62 percent less likely than those with later or inconsistent bedtimes to have attention problems and 81 percent less likely to have aggression issues. And in a study published last month, Japanese researchers reported that 18-month-olds who went to bed before 10 p.m. were at a lower risk for motor, language, and social deficits compared with kids who went to bed later. One thing to keep in mind, however, is that developmental disorders can also cause irregular sleep patterns, so lack of sleep isn’t always the driver here.

For teens, early bedtimes seem beneficial, too. One study reported that adolescents with parent-set bedtimes before 10 p.m. were 24 percent less likely to be depressed and 20 percent less likely to have suicidal thoughts compared with those who had later bedtimes. Again, you have to wonder whether kids who go to bed early differ in other important ways from kids who go to bed late—perhaps their lives are less stressful or their parents are around more, factors that could independently affect their emotional health. But sleep likely plays a role. And by the way, no, it’s not a good sign when kids sleep in on weekends, Weissbluth says. One study found that the longer that teens slept in on the weekends, the more mistakes they made on tests requiring careful attention. Extra weekend sleep is basically a sign of chronic weekday sleep deprivation.

Not convinced yet? There’s also an interesting link between bedtime, sleep duration, and metabolic health. Research has found that compared with other children, those who sleep less and go to sleep later are more likely to be obese. For instance, one study found that 5-year-olds who went to bed after 9 p.m. were 50 percent more likely to be obese and gain weight over time compared with those who went to bed before 9 p.m. In fact, kids with late bedtimes are more likely to be overweight even when they get the same amount of sleep as kids who go to bed earlier. No one knows why bedtime is linked with obesity risk, but changes to the hormones leptin and ghrelin, which regulate appetite and hunger, may play a role.

By now you’re probably wondering: What is my kid’s ideal bedtime? Sorry, there’s no simple answer; it can depend on age, nap schedule, and other factors. When my 13-month-old was having sleep problems, I contacted Arielle Driscoll, a longtime friend and founder of Expect to Sleep Again Sleep Consulting. She advised me, based on when my daughter was waking up from her afternoon nap, to put her to bed as early as 6 p.m. on some nights—and it helped. Other kids might do better with a later bedtime, although Driscoll says she rarely recommends putting young kids to bed later than 8 p.m. Weissbluth agrees that the ideal bedtime varies by child; a good way to tell if your kid is going to bed too late, he says, is by watching his behavior between 4 and 6 p.m. (if he’s a toddler or preschooler) or between 5 and 7 p.m. (if he’s older). Is he alert, playful, and fun to be around? Or is he edgy and irritable? (If he’s in daycare or has a nanny, ask his caregiver.) If he’s grumpy, he may need to go to bed earlier. One simple experiment Weissbluth recommends if you’re not sure: Try putting your kid to bed 20 minutes earlier for a few nights and watch what happens. If he falls asleep easily, then chances are he or she should be going to bed earlier. Make sure, too, that you’re limiting television and smartphone use before bed. Research suggests a strong link between evening screen time and sleep problems.

To complicate matters more, if your kid is waking up super early (before 6 a.m.) or acts like she drank four Mountain Dews just before bedtime, don’t take that as a sign that you need to put her down later—paradoxically, the opposite could be true. When kids (and adults) are sleep-deprived, their bodies release hormones including cortisol, adrenaline, and noradrenaline, Driscoll says, which give them a second wind at bedtime and also make it harder for them go back to sleep early in the morning. “Often I hear ‘I can’t put my child to bed that early—he’s wired!’ But it’s more likely that he’s wired because these hormones have caught up with him and he’s actually overtired,” Driscoll explains. “I’ve had lots of people be skeptical of early bedtime and then the next morning they are screaming from their rooftops about the beautiful night’s sleep their child just had—and they even woke up later.”

This all sounds great until you start to consider logistics. I’m lucky in that I work from home and have a flexible schedule, so I can accommodate a 7 p.m. bedtime. A lot of parents simply can’t. What then? Weissbluth says that in his experience, there are usually tweaks parents can make to facilitate a slightly earlier bedtime—and small changes, he says, can have a big impact on kids. Maybe you could get your nanny to start the bedtime routine before you get home, he suggests. Or you could prep your kid’s dinner in the morning so you can feed him right when you walk in the door. Maybe on really late nights—and I’ve done this—you can send your child to daycare with dinner and ask the caregivers to feed her, so that once you get home, you can put her straight into PJs. It may be impossible for you to change an 8:30 p.m. bedtime to 7:30, but if you can shift it back to 8:10, those 20 minutes every night will make a big difference over time, Weissbluth says.

Of course, there are other downsides to the early, consistent bedtime—like the fact that your free-spirited friends and family will think you’re insane. “I’ve been called ‘rigid’ and have been told that my inflexibility will make my kids inflexible,” one friend of mine says. And there’s the annoying fact that if you put your kids to bed at 7 p.m., at least one parent is trapped at home the rest of the night, unless someone parachutes in to babysit. “It is socially limiting,” Weissbluth concedes. But during awake times, he says, “it’s liberating in that your children, who are better rested, can then be taken out in public.” It’s true: Putting my kids to bed early and consistently does reduce the risk that they’ll throw tantrums in the middle of the supermarket—but I wouldn’t go so far as to say it’s a guarantee.

Melinda Wenner Moyer is a science writer based in New York’s Hudson Valley and is Slate’s science-based parenting columnist. Her book How to Raise Kids Who Aren’t As*holes will be published in 2021.