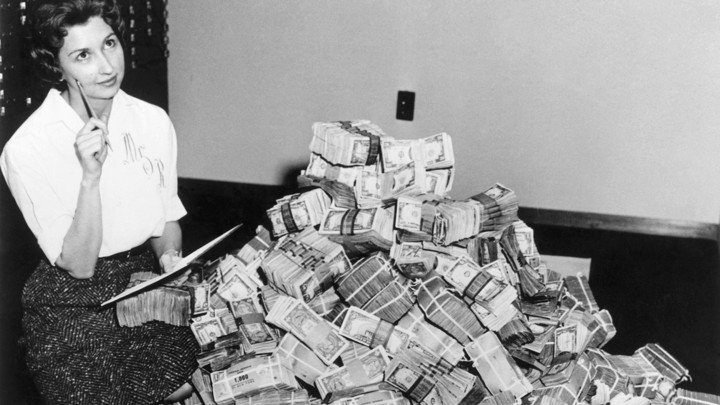 A few years ago, when I was reporting a story on personal finance, I became fascinated by a concept that behavioral economists call the “pain of paying.” The phrase refers to the psychological discomfort experienced when parting with one’s money, and it varies by medium: At one extreme would be painstakingly counting out each penny at the register (a high pain of paying, because of how tactile the transaction is), and near the other would be credit cards (which, by postponing payment and offering rewards programs, ease the agony of depleting funds).

A lower pain of paying feels nicer, but it also tends to lead to higher spending—as research indicates credit cards do. As I familiarized myself with that research, I viewed the plastic rectangle in my pocket with increasing wariness (though, it should be noted, credit cards increase spending much less if one pays off the balance in full each month, as opposed to carrying debt and racking up interest payments and fees). “The overspending induced by a credit card will, except in tandem with the most un-fun, disciplined rules, outweigh its perks,” I wrote at the time.

As a matter of fact, after writing that piece I came up with just such an un-fun, disciplined rule and applied it to my own spending—and it has mostly worked. The rule is simple: After I buy something, I log the transaction on my phone, recording the price and what I bought. The idea is to increase the pain of paying, especially with a credit card, by forcing myself to take note of what I’m spending.

Looking back at my bank-account statements from the past few years, I can see that my monthly discretionary spending dropped somewhere between 10 and 15 percent in the five months after I introduced this system. The trends are a bit hard to track with any statistical certainty—spending varies month to month for all sorts of reasons—but I did, in the early days, find myself forgoing certain transactions, for instance, opting more often for a bus over a ride-hailing service.1

Perhaps the more definitive success of my system is the fact that, even as I have begun to earn more money, my monthly spending has remained more or less the same—a fact that I attribute in part to the increased clarity of my cash flow. (I also track my weekly spending in spreadsheets, which probably helps too.) Another benefit of keeping a ledger is that it alleviates the credit-card-induced stress of knowing that money will come due but not knowing exactly how much is owed until the bill arrives; in this way, my system adds some short-term pain but alleviates a longer-term discomfort.

Now that I’m almost three years into following this rule, I talked to some personal-finance experts to see what they’d make of it, and if they thought it might work for others. Dan Ariely, a behavioral economist at Duke University, was a fan. “Making a list of spending is very useful,” he told me, and said I’d successfully devised a way to increase my pain of paying.

He did, however, mention a few ways that my system could be improved upon. Recording the transaction “after the fact is one thing, but doing it before is probably the right approach,” he said, because then it’d more directly affect the decision to buy something. He noted that a theoretically ideal system would entail logging, say, every item in one’s cart at the grocery store individually, but acknowledged that in practice this would not be ideal.

Another thing to consider when making spending decisions, Ariely says, is what one could be buying instead with the same money. For instance, he suggested setting up a rule like, I’ll set aside some money each week, and every nonnecessity I buy will come out of that, but at the end of the week I get to spend the remainder on a nice dinner. There’s always a trade-off between buying something now and buying something else later, but making it explicit in this way could help inform purchasing decisions.

But in the end, Ariely’s advice was to just use a debit card. “Credit-card companies, sadly, don’t have the interest to reduce the pain of paying,” he says. (Unfortunately, though, in the U.S., opting out of credit cards entirely presents other serious disadvantages—having good credit tends to increase the likelihood of approval for, and lower rates on, loans.)

George Loewenstein, another behavioral economist I talked to, was not as encouraging as Ariely. When I asked him what he thought of my system, he said, “I would say it’s neither effective nor efficient.”

It is ineffective, he says, because it focuses on the wrong type of transaction. “The average person, in my view, a lot of the overspending they do isn’t in the small things, which your system is likely to deal with,” he said. “But it’s large things that are often quite invisible, and wouldn’t be picked up by your system.” There are usually more savings to be had from revisiting one’s auto- or home-insurance policy, or one’s phone bill, than from skipping the marginal cup of coffee. Loewenstein said it’s more effective to make changes with larger “one-time decisions,” instead of regularly having to make “all these micro-decisions.”

And my system is inefficient, Loewenstein says, because it unnecessarily heightens the pain of paying on a lot of transactions that I’d go through with whether my system were in place or not. “Yes, it might lead people to make fewer unnecessary small and medium-sized expenditures, but a big purpose of spending money is to enjoy it,” he said. (He did, however, add that using my system temporarily might help draw attention to any “mindless” spending.)

When I talked to Harold Pollack, a professor of social-service administration at the University of Chicago and a co-author of The Index Card: Why Personal Finance Doesn’t Have to Be Complicated, he also talked about the connections between enjoyment and spending. The conventional way of thinking about budgeting, he says, usually “puts a lot of blame on people when they’re spending money on things that give them pleasure. There’s a sort of puritanical aspect, like, I caught this person going to Starbucks.” He continued, “I think the real goal of budgeting is to make sure that you’re spending your money on the things that are the most valuable and enjoyable for you.” He also made the point Loewenstein did about “big-ticket items,” but said he thinks my system is a good way to make sure someone’s nonessential spending goes toward things they enjoy.

Hearing all this feedback about my personal-finance system made me a bit discouraged about the dynamics that shape spending. On one side of each credit-card swipe are multiple financial corporations—a phalanx of marketers, programmers, and data analysts who have perfect visibility into countless transactions, and who are thus armed with plentiful information about people’s purchases. On the other is the individual, who lacks this bird’s-eye view and is effectively on their own as they weigh whether and how much to spend at any given time. This arrangement seems lopsided and unfair, and it’s disheartening to think that the system I designed to overcome it was something I only arrived at because it was my job to read behavioral-economics research.

Pollack agreed about the system’s lopsidedness, but noted, “A lot of the problem is us … We tend to blame the credit-card industry for our own desire to have a standard of living that is beyond what our income is. You can’t blame Visa for that.” He said the focus should be on norms, and how individual action can alter them—maybe two friends cook dinner together instead of going out. The goal, Pollack says, would be a culture that prizes restraint without being puritanical.

It is a lovely vision, but I have my doubts. What would create such a culture? There is the Consumer Financial Protection Bureau, which (in theory) provides high-level government oversight, and there are small individual actions (like, say, meticulously tracking one’s purchases), but there isn’t something in between—a powerful advocacy group, a mainstream cultural movement, or something else not yet built or imagined—that serves as a counterweight to the pressure on Americans to spend. Personal-finance apps and financial coaches probably help a bit, but it’s unclear what something bigger might look like.

Meanwhile, companies are only getting cleverer—Amazon, for instance, in 2018 opened a retail store in which customers can pay for their purchases by simply walking out of the store with them, thanks to a system of cameras that notes what came off the shelf. In other words, regardless of whether consumers are thinking about it, paying is only going to get less painful. And the less it hurts, the more people spend.