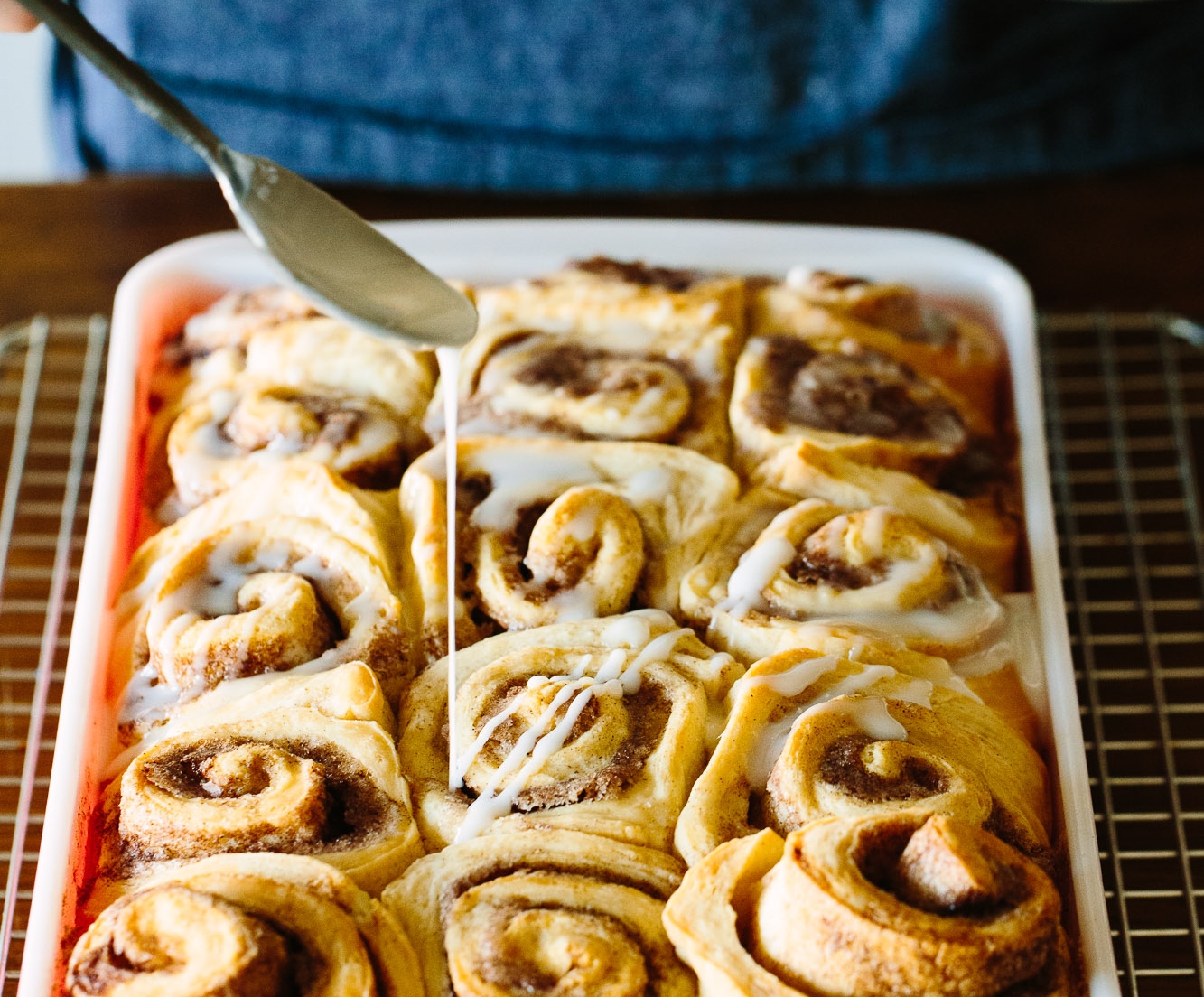 Homemade cinnamon rolls never seem like a project you can undertake in the morning and have ready in time for breakfast, right? All those ingredients to measure out, kneading in a stand mixer, and of course, two rises for the yeast to do its thing. It’s no wonder we’re also picking them up from a bakery, IKEA, and even that chain in the mall.

What if I told you that you could put a big pan of cinnamon rolls together in about the same amount of time it takes for your oven to heat? With just seven ingredients (all staples you can keep in your pantry and fridge), you can make fragrant iced cinnamon rolls without a stand mixer, prolonged kneading, or rising time. Let’s make this magic happen!

Traditional cinnamon rolls get their signature tender, doughy texture from a rich yeasted dough. They’re pillowy-soft, like a cinnamon-scented pillow, but all of this comes at a price: time. Yeast needs lots of time to rise properly, and cinnamon rolls usually need two rises: once when the dough is made, and once more after the rolls are formed. 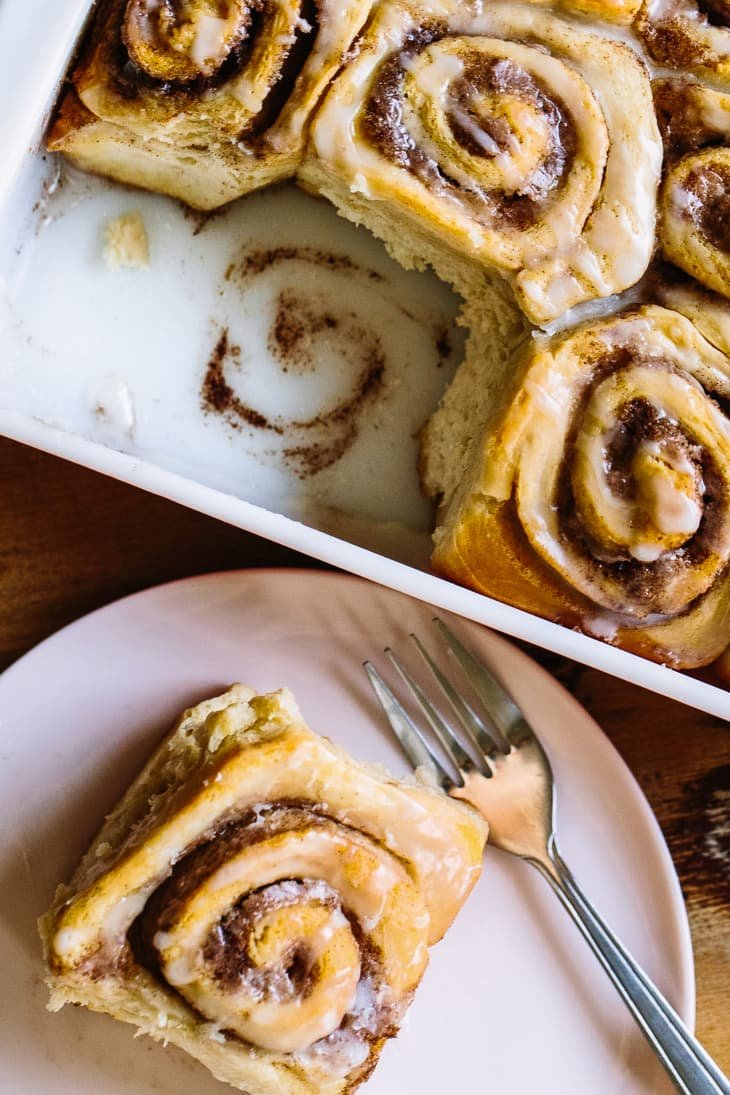 Trade in Yeast for Self-Rising Flour (or a Substitute)

This easy dough is a mixture of the self-rising flour, sugar, milk, and melted butter, and it’s just stirred together in a big bowl. The dough is kneaded by hand ever-so-briefly (and by briefly, I mean about a minute), but it has such a great texture that you can roll it out immediately too. 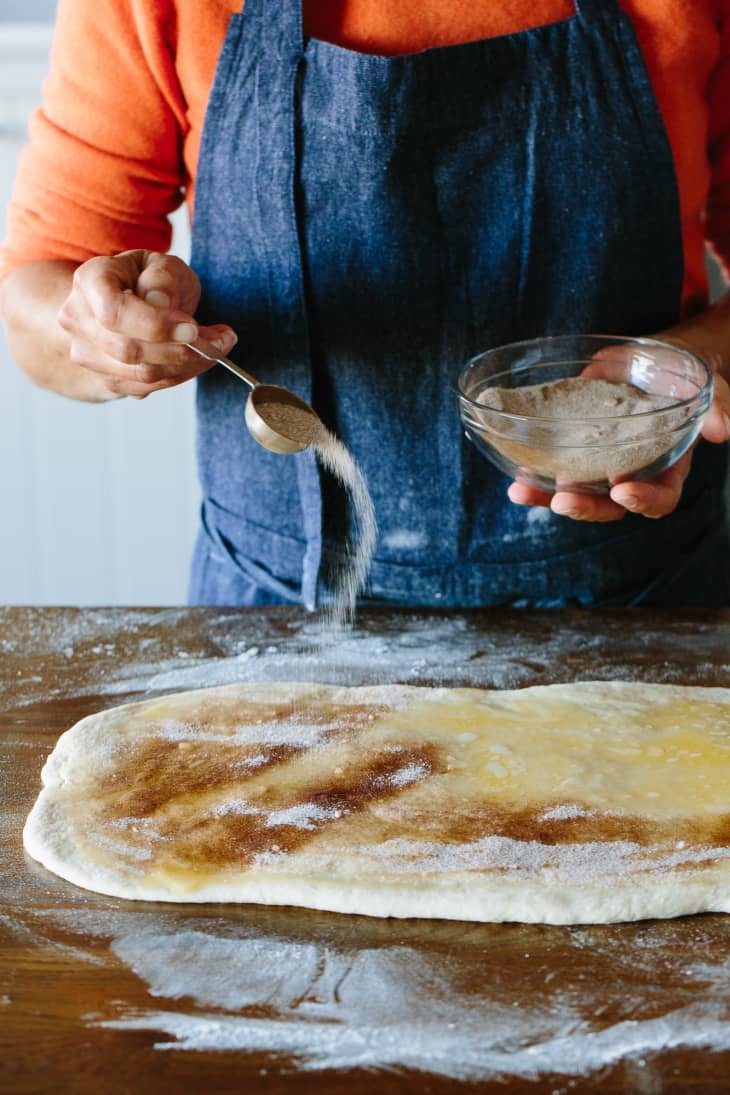 The Finishing Touches for Cinnamon Rolls Are Key

After the dough’s rolled out, the next steps are pretty much like most other cinnamon roll recipes: Brush the dough with butter, sprinkle with plenty of cinnamon-sugar, then roll it into a log and cut into rounds.

Homemade cinnamon rolls go fast, so we use our trusty 9×13-inch baking dish here to make 15 good-sized rolls. More is a good thing when it comes to cinnamon rolls.

While the rolls are baking, whisk together a simple icing of powdered sugar, milk, and salt to glaze the finished rolls with when they come out of the oven. For those who prefer a cream cheese glaze, give Faith’s version a try.

Fresh, warm, homemade cinnamon rolls are waiting for you — just grab a bag of self-rising flour and give these a whirl!

How To Make the Easiest Cinnamon Rolls

For the cinnamon rolls:

Storage: Leftovers can be wrapped in plastic wrap and stored in the refrigerator for up to 1 week. Rewarm in a 300°F oven until warmed through, about 10 minutes.

Christine Gallary graduated from Le Cordon Bleu in Paris, France, and she has worked at Cook's Illustrated and CHOW.com. She lives in San Francisco and loves teaching cooking classes. Follow her latest culinary escapades on Instagram.