How to Keep Your Cool, No Matter What

There’s not much that will make you panic after ten years of dogsledding in the wilderness. And there are lots of ways to feel equally calm in all kinds of outdoor emergencies. 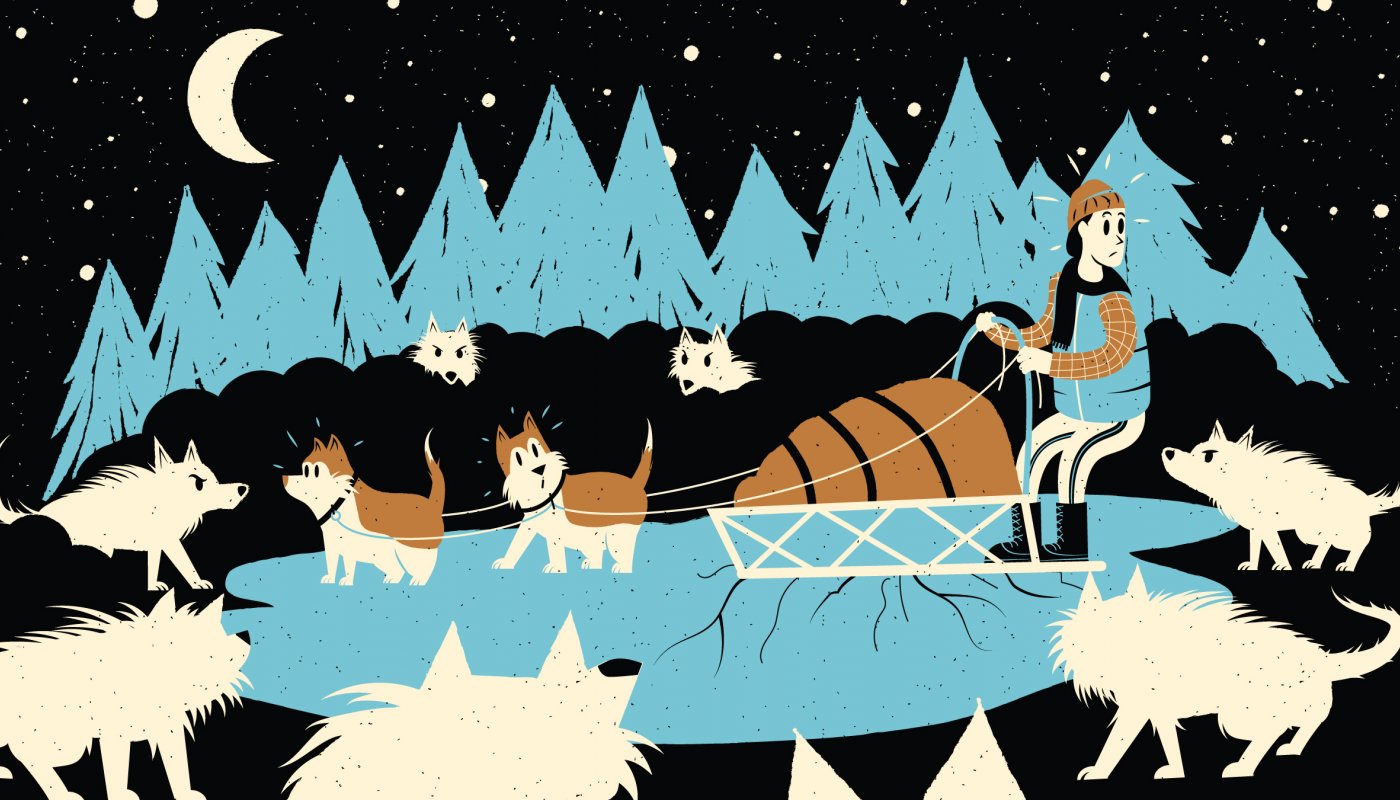 When I started dogsledding in 2007, I dreamed of one clean run. A run where nothing went wrong—the sled didn’t break in half with 14 huskies attached to it, or a blizzard didn’t close in, or the dogs didn’t get stuck in a river, or we didn’t get tangled with a sheep, or any number of disasters that seemed to strike every single time I took the dogs out. I loved the sport, but I was always holding my breath for the next crisis. Because at its core, dogsledding—traveling through subzero wilderness by tying yourself to a team of very strong, very manic dogs—is a practice in chaos management. Once, when I told another musher that I didn’t like adrenaline, he laughed so hard that he almost fell off his sled.

One evening last winter, ten years after I first stepped on the runners, I realized that I couldn’t remember the last time my dog team had encountered a major crisis. Was it possible that I’d achieved that legendary clean run?

Except—now that I thought of it—we had to cross thin ice just that morning. And two days before, a team of hunting dogs encircled us, hackles up, and as the only human, I had to avert a showdown between them and my terrified huskies. And last week, my headlamp froze, and I had to drive the sled for ten miles in moonless woods. (The dogs could see fine; I was the one who would crash into trees at 25 miles per hour.) And, and, and…

Basically, I had stopped seeing problems—even dangerous ones—as disasters and started seeing them as a normal part of travel in deep wilderness. If you spend enough time outdoors, no matter how well you prepare, you’re going to encounter a crisis sooner or later. Trust your future self to handle what comes. And when the mud hits the fan, here are some lessons I’ve learned for keeping a cool head.

Say this aloud until you believe it, and when you feel discouraged, say it again. If you tell yourself that you’re trapped, then you will be. But you’re not trapped. There is a solution—there are probably many. It’s just a matter of figuring out the best one.

#2. If You Don’t Have Something, You Don’t Need It

You’re lost in the woods, it’s pouring rain, and you don’t have a tarp? Tell yourself, “I don’t need it.” This is, of course, not strictly true, but it will help you to reframe your concept of the situation from wishful thinking into reality. Take stock of what you do have, whether it’s equipment or skills. That’s what actually matters in the moment. That’s what’s going to get you home.

The basics will depend on your climate, but for dogsledding I try to bring a minimum of something warm, something waterproof, snacks, matches, zip ties, and rope. I can’t count how many times I’ve rigged some sort of pulley with the rope or (temporarily) fixed a broken sled with zip ties, and now I’d never dream of going into wilderness without them. Be willing to adapt your kit to the situation: When a wolf pack moved into my neck of the northwoods and I started seeing wolves on the trail, I started packing an air horn in case I needed to startle my dogs and the wolves out of a confrontation (or interspecies sex).

I like to differentiate between slow-motion and high-speed problems: basically, how much time you have to stop and think. If you’re falling off a cliff, that’s a high-speed problem. You have seconds to react and will probably act instinctively. If you’re lost on a mountain, that’s a slow-motion problem. You can take time to reason, to think through different scenarios. Most people are naturally better at one of these or the other, and you can use that to your advantage. If you’re better at high-speed problems, you can trick yourself into acting quickly rather than becoming paralyzed with options. I’m better at slow-motion challenges, so my first goal in a crisis is to pause the problem long enough to breathe and think.

The best solution isn’t always comfortable. But if you’re dangerously cold, it’s better to change into dry long underwear than to stay in your sleeping bag, no matter how much it hurts to expose your skin to the air. If the tide is coming in, it’s better to wade now than to swim—or drown—later.

The more money people spend on gear, the more they tend to rely on it, which is a huge mistake. Trust your senses first and your gear second. If you don’t have the skills to go winter camping with three wool sweaters and a lighter, you’re not going to be safer with a Canada Goose and a Jetboil. Think of fancy gear as a source of comfort or convenience, not insurance.

#7. Learn from What Didn’t Happen

After you’re home safe, think back on the experience. Ask yourself what you could have done to prevent problems and how you could have dealt with them more efficiently. Brainstorm solutions to parallel situations. What could you have done if it was raining? Or if you had lost your pack or broken your leg? The point isn’t to beat yourself up but to make things smoother next time.