Madeleine Vall Beijner woke up face down on the floor. A strange metallic noise rung in the 29-year-old’s ears as her eyes slowly focused on the edge of a black and white striped rug. Yes, I know this place… It’s my boyfriend’s apartment, she thought. She saw she was wearing the tracksuit of the Swedish national kickboxing team, with her gym bags stacked next to her – but she couldn’t move. Am I injured? Have I had a stroke? Am I dead?

“I had no idea how I had ended up there on the floor or how long I’d been laying there,” Vall Beijner recalls. “It was dark in the apartment and I was alone.”

It was April of 2014, and Vall Beijner slowly put together that she and her team had been at a weekend-long Muay Thai (a form of kickboxing that originated in Thailand) training camp, yet she couldn’t remember any of the details. Three days of her life were gone.

From there Vall Beijner was supposed to head to the World Championship in Malaysia. “I was going to bring home a gold medal,” she says. Instead, she stayed home, recovering from what was eventually diagnosed as exhaustion. She had been surviving on nutritional shakes, without any solid food, for five days, on top of three intensive trainings per day.

“I was used to starvation to the edge of life, sitting in a sauna until you almost die, in order to weigh in,” Vall Beijner says. The weight-cutting techniques common in the fighting world had taken a toll on her now-flyweight body. She already held two World Championship bronze medals, had won the Swedish kickboxing championship seven times, and was ranked third in the world in her weight class. But she was wearing herself out.

After this episode, she quit kickboxing and shifted her focus to mixed martial arts, thinking, Maybe I’ve had enough punches?, and hoping that on-the-ground grappling would somehow be less jarring. When an old leg injury reared up, she tried traditional boxing. She trained accordingly, immediately qualifying for the national team, but in her all-or-nothing mentality, realized she’d probably never take the gold in this form, either. Her body had been pushed to its limits over twelve years of professional fighting, and doctors advised her to quit.

“I felt very empty,” she says of this time. “Fighting was not only a big part of my life; it was my entire life for those years. Every time I ate a snack and each hour of the day was geared for the next training or title.” Without such goals, she questioned her future and identity. She cried a lot, knowing this need to push herself physically was ingrained, evident even in old family tapes of her brothers and sisters playing in the foreground, while five-year-old Madde ran around alone in circles with a stopwatch, timing herself. She’d competed in dressage as a child and played soccer until the age of 18, when she found she preferred solo sports to the pressure of “letting down a team for some stupid mistake.” Kickboxing came naturally; she partially credits the genes she inherited from her bodybuilder father. 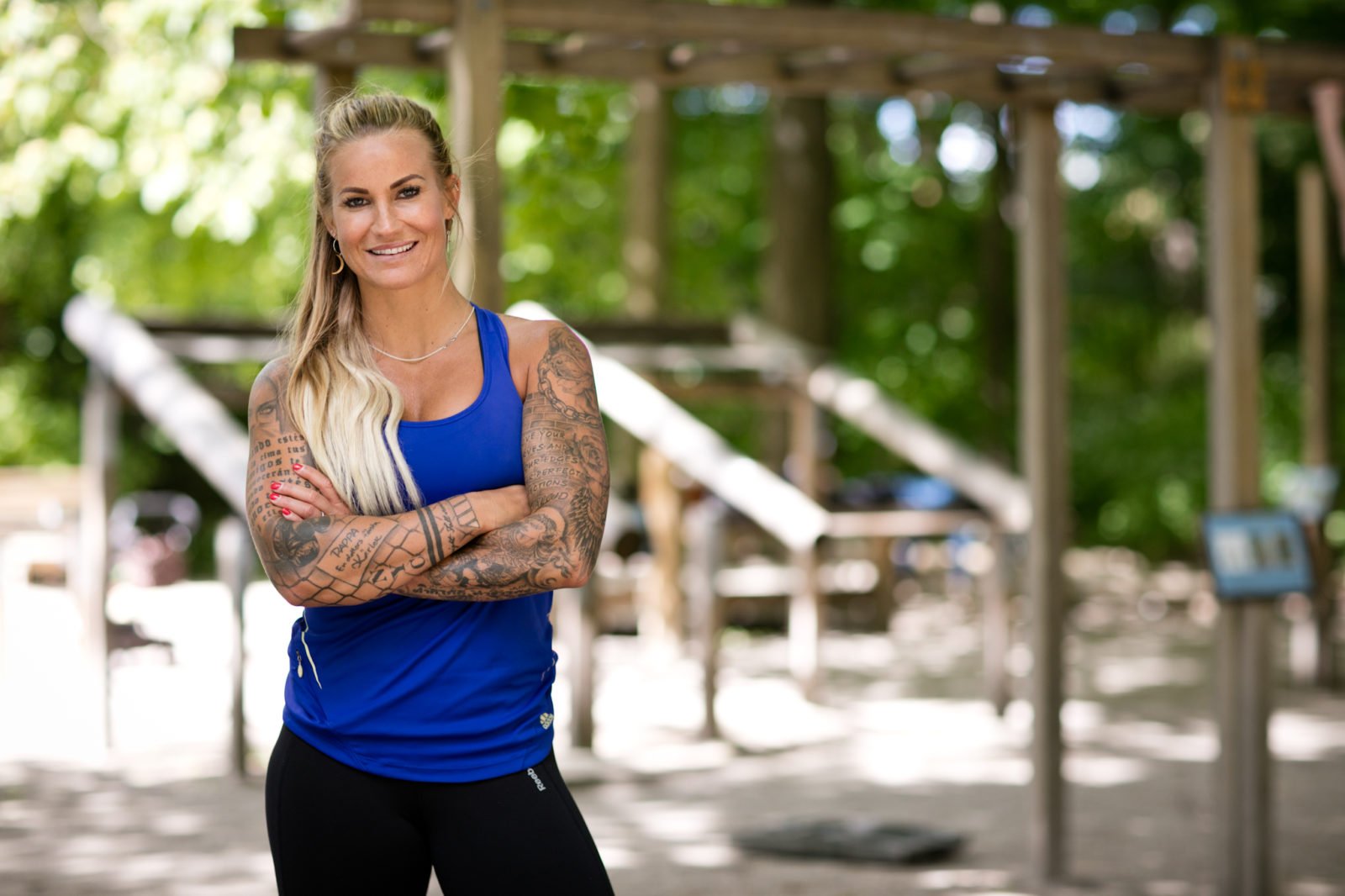 “I wondered, ‘What do normal people do? Hang around and eat muffins?’ That’s not me,” she recalls. “I need to fight, in one way or another. It doesn’t have to be with my fists, but I need challenges in life.” She lives by the Sun Tzu quote, “In the midst of chaos, there is also opportunity,” but she also knew that for her “normal would never be enough.”

Meanwhile, an email from someone looking for stunt actresses for a major film appeared in Madeleine’s inbox. “Wonder Woman – Rise of the Warrior” had been in development for years, and recruitment was underway for fierce women to play the superheroine’s cohorts, an immortal race of Amazons known for their gifts in archery, horseback riding, hand-to-hand combat and swordsmanship.

She ignored the email for days, thinking it a hoax. An actor friend encouraged her to follow through, so she replied. Then, when the casting agency requested an acting reel, she put one together on the fly using another friend’s local production studio. Her husband Daniel – whom she wed in August of 2016 – read her opposing lines as they re-enacted the “If they want a war, we’ll give them a war!” scene from the movie “Troy.”

For three months, she waited. She worked as a personal trainer, launched a clothing line, and appeared in a video for popular Swedish DJ Avicii. She wondered if her casting submission sucked. Suddenly there was a call from the agency and she was flown to London to meet the casting director and the movie’s director, Patty Jenkins. Just a week later she was awarded the role of Captain Egeria, Wonder Woman’s “First Captain of the Guard.”

For the next five months, she and her fellow Amazons trained to look their parts. Vall Beijner was one of the only experienced horsewomen, but she had to learn to fall and flip like a stunt person, as well as use a sword and a shield. Best of all, unlike the restrictions of the fighting world, the training allowed them to eat. “It was natural. This kind of training is the way I’ve been living for years,” she says. “But there was no weight requirement. They wanted us to be healthy, strong women.” For the weeks they trained together as a group, this meant a gym session in the morning, sword and stunt choreography for two or three hours before lunch, then horseback riding in the afternoon, followed by one more session at the gym.

Emoting on camera was the biggest challenge, as it seemed the antithesis of the stone face she had honed as a fighter. “If I get hurt I’m not going to give you the satisfaction of knowing you hurt me,” she says. “Making a movie is different. You have to react, plus there’s choreography, but I had the movement from fighting so I suppose I learned quick.” It took about five hours each day for her to “boot up and suit up” into costume, starting at four am – a little earlier than the others because she had to have her tattoos covered with make-up. “Then I had to reverse that every night, really scrubbing the cover-up off.” 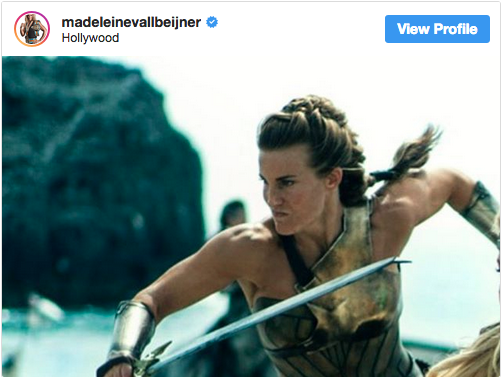 Nearly a year after her last “Wonder Woman” scenes were shot, Vall Beijner flies to Los Angeles – her first trip to the city – for the U.S. premiere. Two days before the big night, she and Daniel hike up to the Griffith Observatory and scan the sprawling city below. She and Daniel stop with their selfie stick to shoot themselves in front of the Hollywood sign for their just-launched reality show, posted on YouTube, “The Beijners.”

In L.A. they also visit a friend, Swedish actor Joel Kinnaman, and work out with him at a local gym. “That’s what she does in her off-time,” jokes Daniel. “She goes to work out in other places.”

On the afternoon of the U.S. premiere, the kickboxing champion primps like a girl finally asked to prom. She has brought five black dresses “that all look very similar,” and finally decides on her oldest one – the one she feels most comfortable in, which she swears she’ll wear until it falls apart. Then she dons the crystal statement necklace given to her by Swedish jeweler Shlimp and Ulrich, does her own make-up, and pops open a bottle of Champagne to toast with Daniel in their hotel room before heading down the street to the Hollywood Pantages Theater.

Daniel tries to calm her nerves in the car, reminding her, “You have walked a ton of red carpets in Sweden” (for her stunt work in two Swedish films and numerous sports-related awards ceremonies). But from the moment she steps onto the stylized Wonder Woman-blue carpet, she recognizes this is different.

“I knew it would be weird, but as soon as we stepped from the cab, people were yelling ‘Madeleine! Madeleine!’ Look over here!’” Vall Beijner, who wasn’t sure anyone outside of Stockholm or the kickboxing world would know her name, shuffles down the walkway, smiling toward the blinding flashes from paparazzi as fans press against metal stanchions, and before she knows it, she’s inside taking her seat in the iconic theater.

Seeing herself in the battle scenes on the big screen, with darker hair and no tattoos, is “strange.” As second in command to General Antiope – played by Robin Wright – Vall Beijner’s Captain Egeria is seen slaying enemies in each of the film’s beach fighting scenes shot on Italy’s Amalfi coast, as well as in the “throne room” when a captured “Steve Trevor” (Chris Pine) is ensnared by the Lasso of Truth.

Seeing the complete movie for the first time is everything she had hoped for and more. “Patty has done something no one has before,” she says. “Wonder Woman is a superhero but also a human, and there’s a lot of love in the character. It’s really beautiful.”

Vall Beijner reunites with her fellow Amazons of Themyscira at the after-party, and then makes a beeline to thank Patty Jenkins for the opportunity of a lifetime. “When I got to her, I just started crying because she said to me what I wanted to say to her: ‘You are so amazing. I’m so glad you are a part of this movie.’ I was like, ‘No no, I wanted to say that to you.’”

Vall Beijner and Daniel are back to their hotel by midnight and they fly back home the next day, in time for the Swedish premiere. What the champ hopes for now is only what every fighter wants: a new challenge. “Wonder Woman Number Two is what I want to do,” says Madeleine. 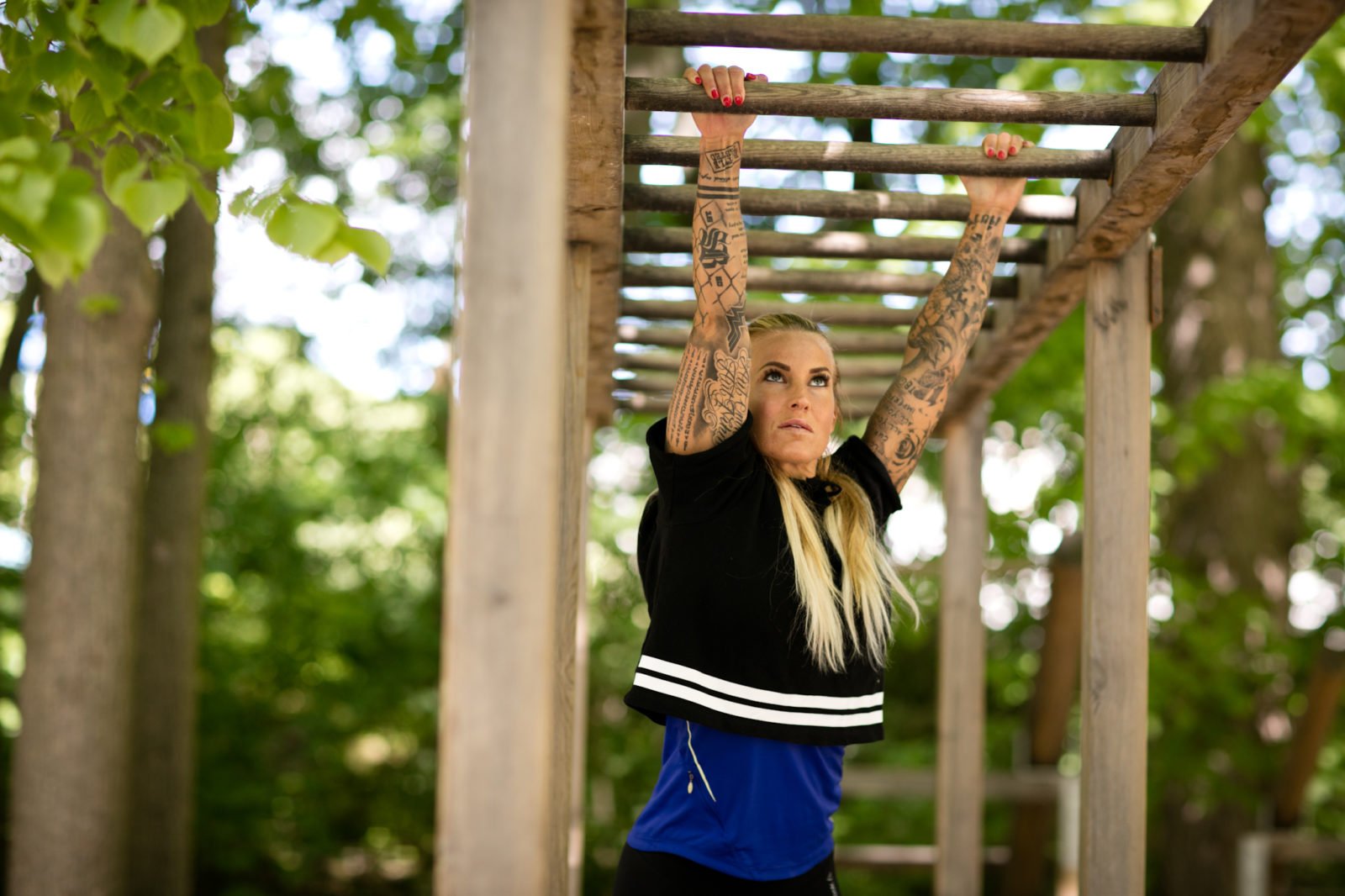 Vall Beijner works out at an outdoor training facility in Stolkholm.

Until that next call, she continues to build her arsenal by earning a motorcycle driver’s license, practicing her target shooting, and cramming in as many acting, English, Taekwondo, yoga and ballet classes as she can.

“The action is what I love doing,” she says. “I want to learn it all.”