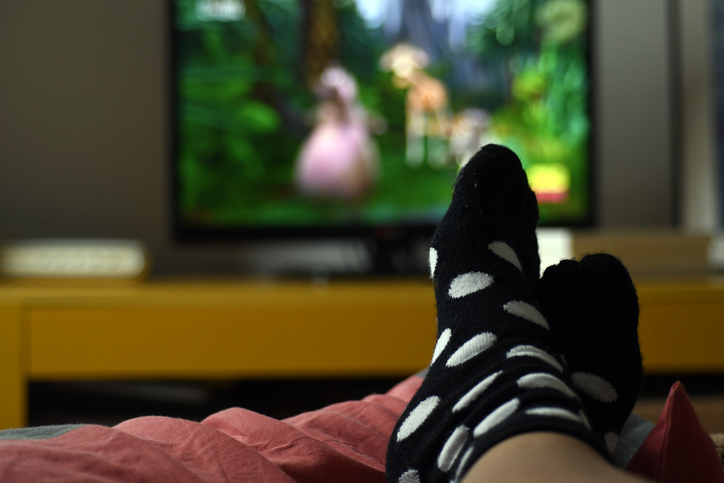 I’ve never seen Game of Thrones, I don’t know what the Scandal is, and I couldn’t name a single “real” housewife. I thought I didn’t watch much television and that taking a 30-day break would be a piece of cake. I was wrong.

The average adult watches 2.8 hours per day of television, according to the American Time Use survey from the Bureau of Labor Statistics. Another study puts this number higher, at four hours and 15 minutes each day. I added up all of the viewing at my house, and we were definitely on the high side.

Nielsen, we have a problem.

The Dangers of TV

A lot of research has been done around TV viewing and children, and Adam Lipson, a neurosurgeon with IGEA Brain & Spine, says one of the best studies is from Tohoku University in Japan. “They noted thickening of the frontopolar cortex, which is related to verbal reasoning ability, and also correlated with a drop in IQ in proportion to the number of hours of television watching,” he says. “In addition, they noted thickening in the visual cortex in the occipital lobe, and in the hypothalamus, which may correlate with aggression.”

Studies involving adults have tied television watching to Type 2 diabetes, depression, and even crime, adds Lipson. “Many of the studies report adverse effects with television watching greater than one hour per day,” he says. “There have been EEG studies that demonstrate that television watching converts the brain from beta wave activity to alpha waves, which are associated with a daydreaming state, and a reduced use of critical thinking skills.”

Eric Braverman, founder and president of Path Foundation NY, a nonprofit research organization devoted to brain health, is a little more blunt: “The boob tube turns you into a boob,” he says. “Television mesmerizes people and turns them into intellectual spectators. It feeds passivity and makes you less engaged.”

Ouch. But he’s right. Once the blue glow fills a room, I often find it hard to break away. Television watching is a habit my husband and I started as kids; we both grew up spending “family time” around programs like Love Boat and Fantasy Island. He agreed to take the challenge with me. No TV. No Netflix. No live streaming anything. “How hard could it be?” we thought.

During the first few days we were at a loss for what to do. It had been our routine to watch whatever is on TV after dinner, and suddenly we were both dumbstruck for ideas. So we went to sleep at 8:30 p.m. Then a new routine kicked in. We started cooking together, took the dogs on longer walks, completed tasks around the house that had been on the to-do list for too long, and had great conversations over a glass of wine. On Friday and Saturday nights when we didn’t have plans with friends, we listened to CBS Radio Mystery Theater on YouTube, a radio program we had both loved as kids.

While week one was filled with fighting the urge to turn on the TV and brainstorming other activities, weeks two and three were when things started to change for me physically and mentally. Most notably, I felt less stressed. A lot of the programs we used to watch, like Dateline or 48 Hours Mystery, had elements of suspense, drama, and violence. Had this stuff been rubbing off on me?

“TV increasingly traffics in violent programming to keep the viewer in a state of constant fear,” says Wheeler Winston Dixon, Ryan professor of film studies at the University of Nebraska. “TV also acts as a pacifier, a sort of virtual escape, but it is one that never satisfies, and only leaves the viewer wanting more of the same emptiness.”

Another side effect was that I felt less rushed when we were out. There was no reason to run home to catch a show. Whether I was in line at the grocery store or shopping for a suit with my son, I didn’t worry about time. And I seemed to have more patience.

By the end of the TV-free month, I finished the stacks of magazines that were sitting on my nightstand and end table, cleaned out my closet, started the capsule wardrobe I always wanted to have, donated 10 bags of household items we no longer needed, went to a viewing of a documentary about minimalism, and took my son to New York with me when I attended a writer’s conference, spending time with him being a tourist.

I also read three books and enjoyed one so much I’m reading it again. Reading is a much better substitute for your brain and creativity, says Braverman. “The greatest thing is reading fiction and nonfiction, it stimulates both sides of the brain,” he says.

Yet, TV isn’t all bad, says Braverman. “There are tons of programs that challenge brain, such as shows about history,” he says. “Life is not about learning every second. TV is a tremendous potential source if properly handled. The problem is that it’s a difficult instrument to control. Some things have more destructive qualities, and TV is one of them. Just like sugar is a deceitful food, TV is a deceitful presentation of life.”

Did We Turn the TV On?

I didn’t. (My husband has gone back to watching the Golf Channel at night.) As I write this, it’s day 33, and I have not watched a single television show. Not even the final episode of The Good Wife, which I recorded and was so sad to miss. That’s because the best result of this experiment was the sense of calm that has seemed to set in, and the waves of contentment that come out of nowhere. Sounds crazy, but it’s true. I don’t want to go back. At least not yet.

“Happiness comes from the interaction between inspiration and perspiration,” says Braverman. “Anything that stops humans from perspiring to achieve something inspiring gives a false fantasy and an endless distraction from reaching your full potential.”