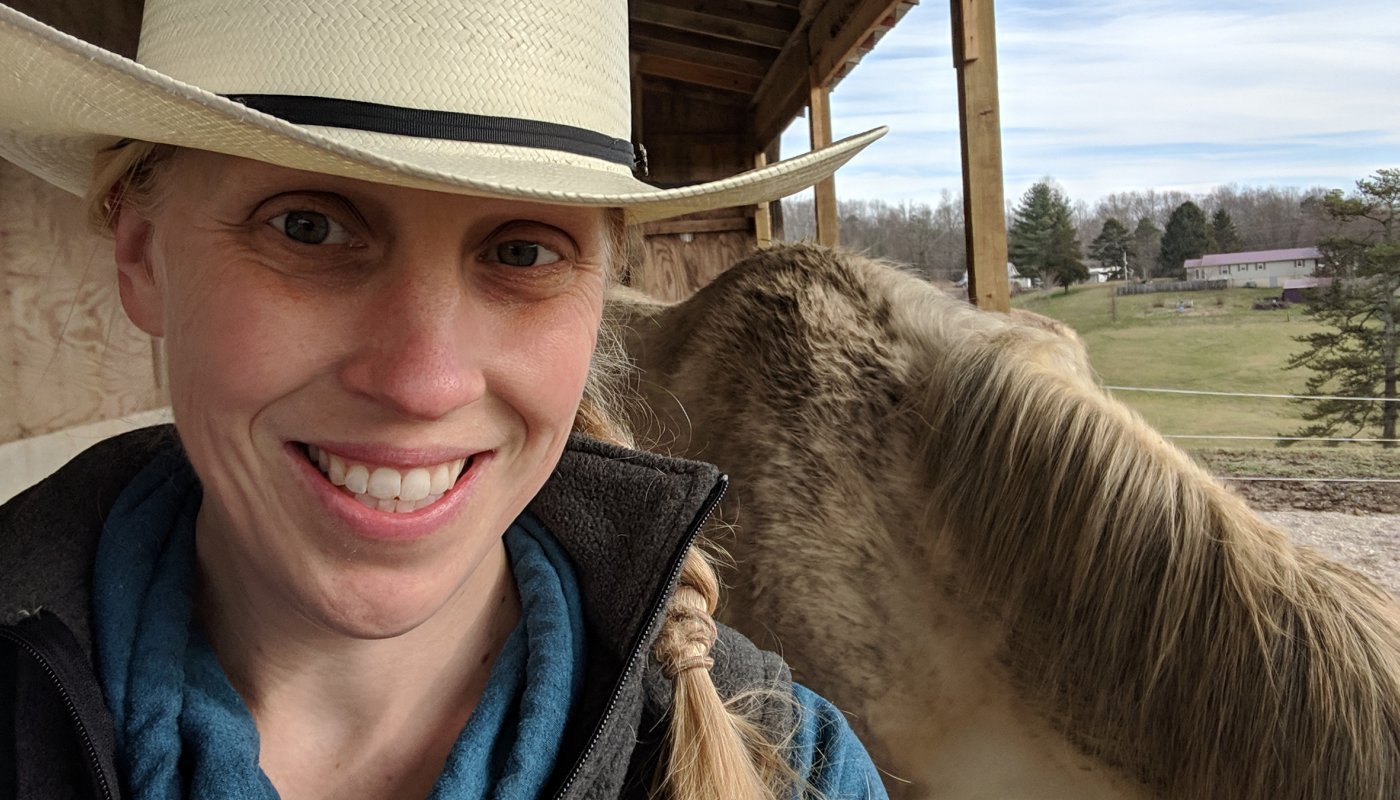 The writer on her farm. Photo by AC Shilton.

I’m out building a fence against a dove-colored December sky. It’s 4:08 p.m., and the sun is anxious to clock out for the night. Rain is in the forecast for tomorrow and the next day. I need to get this done before dark, but I’m barely halfway through.

I shove another screw into the wood. The drill bucks and smacks me in the face. This will be my second black eye in as many months.

Six months ago, [in the summer of 2018,] my husband, Chris, and I bought a 46-acre farm in northeast Tennessee. Though we’re equal partners in it, the farm was my idea, and I’m the primary manager.

The impetus to buy the farm grew out of a career and identity crisis I was having. I was feeling increasingly insecure about the stability of my chosen profession—journalism. I’ve ducked and woven my way through a freelance writing career, bringing home just enough money to drive an 18-year-old truck and (sometimes) have health insurance. At the same time, I’d completely burned out on endurance sports, which I’d been doing throughout my teens and twenties. Training felt like a chore, and I was seeking a new way to use my body that didn’t require thousands of dollars in gear and entry fees.

The author produces as much of her own food as possible. Photo by AC Shilton.

I’ve always loved animals, being outside, and hard physical labor. As a kid in the suburbs of Washington, D.C., I’d often play farm, pretending to tend cows or mend fences as I was raking leaves or pulling weeds. (I was a weird kid.) And, in a bid to eat more sustainably, Chris and I had already been hunting for and growing our own food in raised garden beds at our suburban rental home in Tennessee for a few years. While considering how to supplement my income, I thought, People always need to eat. So I came up with the idea to buy an old, run-down farm, where initially we would grow enough to feed ourselves and a few neighbors. I’d sell eggs and pumpkins at the farmers’ market. Maybe we’d even make goat cheese someday. Chris balked at the idea, but I couldn’t be talked out of it. “They’re not making any more land,” I said, trying to convince him that it was a good investment.

I signed my name on the title paperwork, soothing my soul that I was about to embark on something good and just. Yes, I know: swapping journalism for farming—the only other industry that, thanks to tariffs and climate change, is at even bigger risk of losing its footing—is about as idiotic as grabbing the undercarriage of a bull and hoping milk squirts out. There’s never enough money. There’s too much rain. There’s not enough rain. The tractor or my truck won’t start (cue the country song).

But in doing so, I may have actually conquered another crisis, one I’d given up on fixing years ago. At 34 years old, I finally love my body.

I spent years in a deep embrace with endurance sports. First I ran. Then I did triathlon. Then I raced bikes. Then back to triathlon again. Along the way, I developed a serious eating disorder. I’m nearly six feet tall and had ducked under 100 pounds when, at 20, my father staged an intervention. I got treatment. I got better.

Still, I never fully came to terms with my body—the size or the shape or the wonder of it. Post-recovery, at my healthy weight, I’m 145 pounds. In the normal world, no one would call me overweight. But for more than a decade, I didn’t live in the normal world. I lived in the endurance-sports world, where tininess was right up there with godliness.

Running, cycling, and triathlon are sports that celebrate the knife-edge between fitness and thinness—doing the most you can with the very least. Now there’s a movement toward body positivity in triathlon and running. “Running is a celebration of what I can do, not punishment for what I ate” was a common line, even when I was competing. I probably said it myself. Maybe some of us even meant it. I reckon that some of us also knew there was a tinge of untruth to it. At least that was my experience. When I read things like Alberto Contador saying his favorite thing about retirement is that he’s “no longer a slave when it comes to things like diet,” I think, I hear you, Alberto.

Meanwhile, producing my own food is the hardest endurance sport I’ve ever done. No level of training compares to the day-after-day-after-day grind of wrestling food from the earth. In September, I nearly threw up while stacking 60-pound hay bales in a 110-degree barn. I’m fairly sure I have a hernia from shoveling several thousand pounds of gravel. Last summer, when I posted a picture of a tiny blackberry in my palm, most of the comments were variants of Holy cow, those calluses.

The most astonishing thing about life on a farm is that I’ve stopped thinking about calories altogether. This is quite possibly because I’m too busy to think about them. I’m up at 5 a.m. to exercise the horses. Then I feed our various critters—cats, dogs, aforementioned horses, and soon chickens and goats. I clean stalls, move manure to our compost pile, and, if I’m lucky, sneak a cup of coffee in somewhere. I sit for a few hours of freelance-writing work and then head back outside. Afternoons and evenings are spent rebuilding barns or pulling dumped concrete blocks out of the stream. Some days I get in a run before it’s time to feed the animals again. And this is just my winter routine. In summer, we also pull weeds, pick bugs off plants, and harvest whatever has come into season.

The horses require exercising at 5 a.m. each day. Photo by AC Shilton.

A year ago, I thought there were good and bad foods. I now think that any food that I can pull from the earth—be it a turnip or a tuber—is a good food. The only bad foods are the things that won’t grow. We’re still a ways away from being fully self-reliant: it’s amazing how hard it is to grow all your own food, and how accustomed we’ve become to unseasonal bananas and lettuce in winter. But about half of our produce and proteins—for the latter, we usually hunt for a deer and grow a hearty crop of pinto beans and black-eyed peas—comes from within a square-mile radius of our kitchen.

Farming is the sport that’s made me the most at peace with myself. I am my own boss. I get more vitamin D than I need. When I take a second to catch my breath, I pet velvet horse noses and snuggle with our barn cat. I have never been so in tune with what the weather is about to do. I have never spent so much time in the natural world. And, unlike in journalism, no one sends nasty e-mail to their local farmer.

To finish building the fence, I worked the last three hours by the light of a headlamp. I had aching arms and a swelling black eye. Strangely, the black eye didn’t bother me. Whereas once I would have run for a mirror and an ice pack, now I cared more about finishing the work than what I might look like tomorrow. Driving the last screw in, I thought, I could work for longer if I had to. This body could do more.