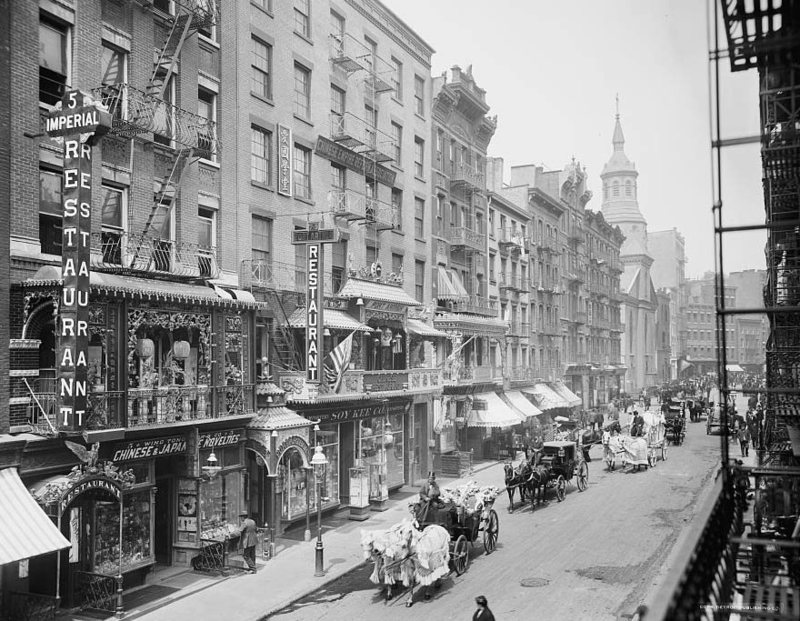 One day in 1941, Lee Ng Shee went for a stroll in Bradley Beach, New Jersey. She was the wife of a prominent merchant in New York City Chinatown named Lee B. Lok, who in 1891 had established Quong Yuen Shing & Company, a general store on Mott Street. The family liked to spend their summers on the Jersey Shore, though it was a challenge to find landlords who would rent to nonwhites. Lee Ng Shee was passing a house on Newark Avenue, stepping carefully on her bound feet, when a woman came out on the porch. “Are you looking for a house?” the woman called out. “Would you like to buy this one?”

Lee knew a deal when she heard one. “Two thousand dollars later, Lee B. Lok and family were ensconced in a summer bungalow of their very own in the village where twenty years before they would have been lucky to be able to rent some rooms over a store,” wrote Bruce Edward Hall in his Chinatown memoir Tea That Burns. 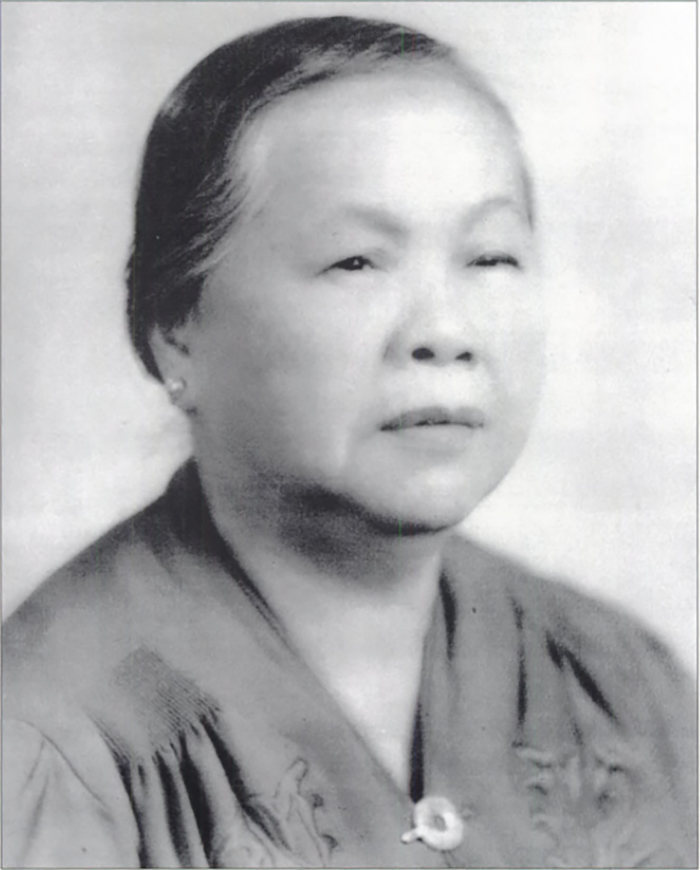 Lee’s lucky break paved the way for more Chinatown families. Others bought along the same street, and soon, Newark Avenue became an equivalent to Mott Street in Manhattan; a mini, parallel Chinatown on the Jersey Shore. Jokingly, they dubbed the area Chinatown-by-the-Sea. Other old-timers call it “the Chinese Riviera.”

While the Lees blazed the path of home ownership, the story of how Chinatown families started renting in Bradley goes much farther back. In 1877, the minister of a rural parish in Sherman, Pennsylvania asked his congregation to open their homes to poor children from New York City. Tuberculosis was endemic in the city’s overcrowded tenements, and fresh air was believed to help with respiratory ailments.

The initiative was a hit, and churches throughout New York City began sending parishioners to country and seaside locales during the summer. “The three principal groups into which the guests were divided were the Hebrews, the Italians and the Chinese; of these probably the most interesting were the Chinese women and children,” reported one Lower East Side church in a 1909 edition of The Christian Advocate. “For al! [sic] these people, boys and girls, mothers and babies, a vacation from the almost intolerable conditions of the lower East Side, and, worse yet, of Chinatown in summer is a very gift of God.”

Those efforts grew into what is known today as the Fresh Air Fund, a nonprofit organization that continues to send children from low-income communities on summer vacations in the country. And, it introduced Lower Manhattanites to Bradley Beach. The connection was forged by the Church of All Nations, a Methodist settlement house that opened at 9 Second Avenue, near Houston Street, in 1923. The church’s name reflected a credo of acceptance and inclusiveness; consequently, services were given in Polish, Chinese, Russian, and English. There were activities too for Italians and Germans; and use of the church’s gym, assembly hall, classrooms, swimming pool, and rooftop sports field were open to all. It even let a nearby synagogue use its chapel for Passover celebrations. 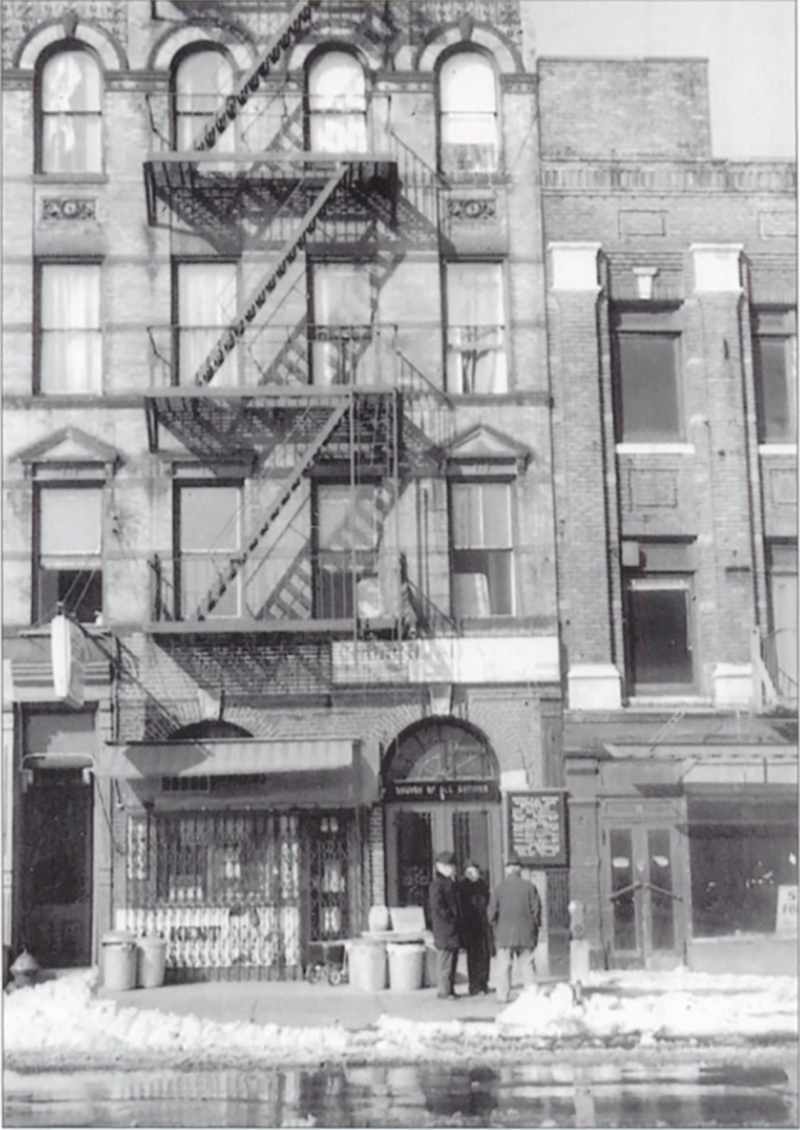 The church owned a summer home named Cliff Villa in Bradley Beach, a tiny, mile-long town on the New Jersey shore. Each summer, the church sent different ethnic groups to vacation there for two or three weeks at a time: one time slot for Chinese, another for Italians, and more for other groups, including Armenians, Slovaks, Poles, and Japanese.

“It was a time for beach, games, outdoor showers, nights at Asbury Park, Sundays at the Ocean Grove Auditorium and happy memories of new and old friends,” recalls former attendee Tim Tsang in an oral history he contributed to the book Bradley Beach Treasures: Reflections of the Jersey Shore by Bette Blum. Tsang (who died in early 2017) first visited Cliff Villa with his uncle in 1939, when Tim was 11. He even met his future wife, Margaret Chin Tsang, at Bradley Beach a few years later.

Other visitors recall buying penny candy and one-cent fish hooks at Virgil’s on Newark Ave, fishing at Fletcher Lake, and the clanging of the bell that Cliff Villa’s manager Joe Giglia rang at mealtimes, to call in children playing nearby. 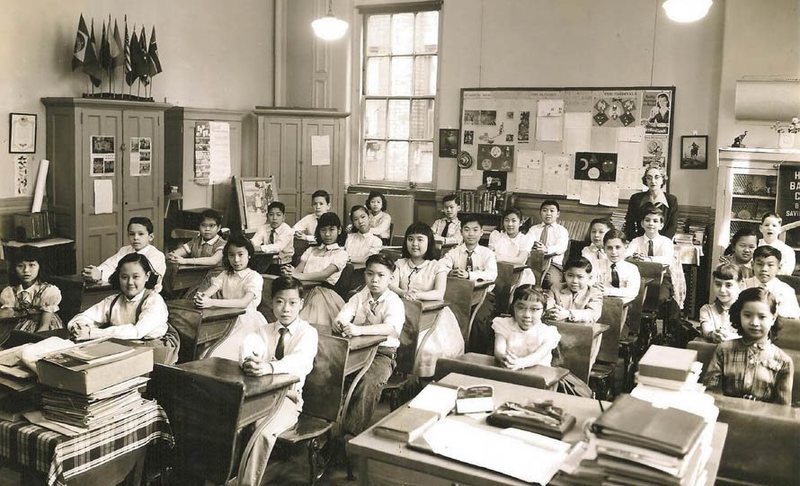 Fresh Air families from Chinatown loved the experience so much—especially in the years before air conditioning—that they began to rent there on their own. By the late 1930s, they had become a common sight in town. However, they were not always welcomed. Sometimes neighbors complained, and the families would move to a less conspicuous location, according to Hall. For that reason, it was a watershed moment when the Lees bought that first home on Newark Ave.

“In our section of Bradley, we—not just us but other groups—were people that couldn’t fit in everywhere else. We couldn’t go to Spring Lake; that was the Irish Riviera. [The borough of] Deal was all the very wealthy homes. Ocean Grove was strictly white Methodist. And the section we’re in is the north section of town, which was not as desirable as the south end,” recalls 75-year-old John Mok, grandson of Lee Ng Shee and Lee B. Lok, who lives on the very same block where his grandparents first bought in 1941. (Mok, it seems, is destined to live in the heart of Chinatowns—he grew up at 34 Mott Street, in the same building where, more than half a century earlier in 1873, a man named Wah Kee opened a store selling Chinese goods, and established Manhattan Chinatown as we know it.) 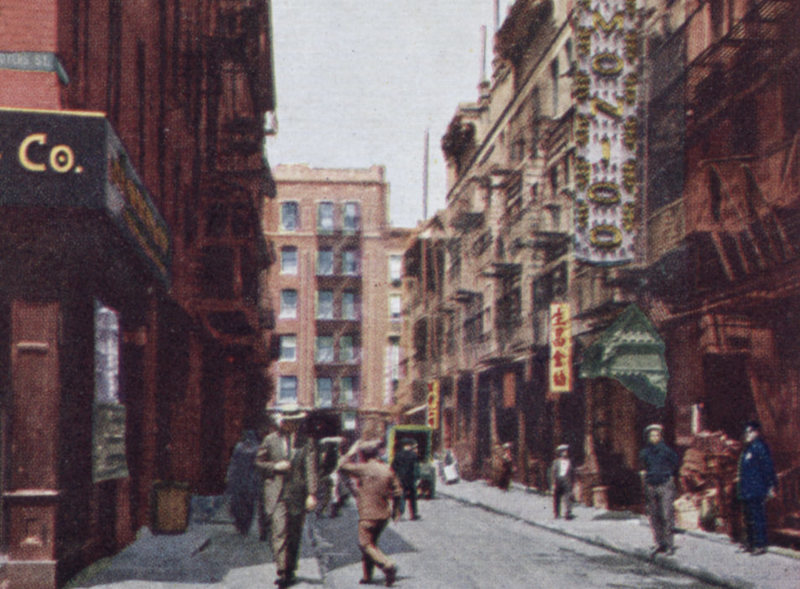 In his book, Hall (now deceased) evokes the summertime scene among his grandfather and other family members during the 1950s: “[O]n Memorial Day weekend the exodus begins. Hock Shop in his Buick, Dr. Liu in his Chrysler, Pee Wee Wong in whatever old jalopy he has cobbled together in front of his apartment on Mott Street join the caravan of cars trundling through the Holland Tunnel and down old Route 9 to their sunny summer enclave. It seems as if everyone is there, in little pockets just like the family compounds in their ancestral villages. The Hor family is on the fourth block, the Lees in the first, the rest elsewhere on Newark Avenue.”

The men would drop the women and children off for the summer, then head back to their jobs in the city. On Mondays, after the Sunday rush in Chinatown had ended, they would commute down again. The women would sew and play mahjong, while the men played cards or piled off to nearby Monmouth Park Race Track, “probably spending more time with the ponies than they ever do by the ocean,” wrote Hall. The children would get pizza and ice cream at Virgil’s, or tromp over to Asbury Park for arcade games and carnival rides. 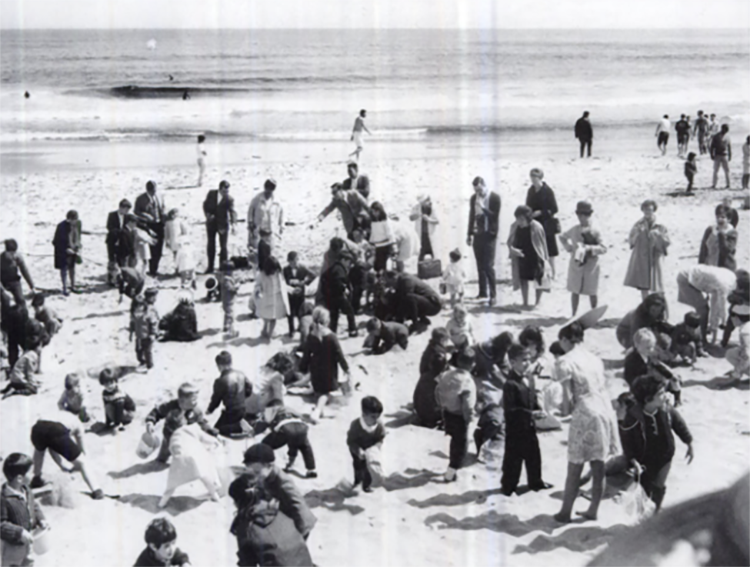 Other ethnic groups have formed similar communities in Bradley. From the 1940s onward, the area was dubbed “Bagel Beach” for its popularity among Jews from New York and New Jersey. During the 1950s, Park Place Avenue, just one street over from Newark Ave, became an Italian area, attracting residents of Little Italy in Manhattan. In a quirk of serendipity, Little Italy is adjacent to Manhattan Chinatown, and thus Bradley Beach’s Italian and Chinese sections mirror the ethnic geography of New York.

“My mother loved it,” said John Mok of his own family’s experience in Bradley. “She was a schoolteacher later on in life, so she got the summers off, and she just liked being here because she [had] always lived in an apartment. [Growing up,] we were in a tenement with an outside bathroom.” 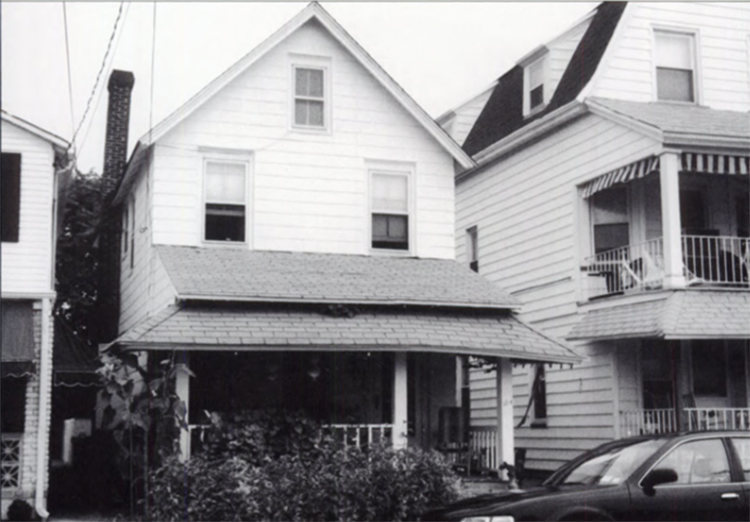 Mok’s grandfather had six daughters and one son, making for quite a tight fit at that original home on Newark Ave. Eventually, one of his aunts bought across the street. Another aunt, with his mother Grace, bought down the block, where John lives today.

The store Lee B. Lok founded closed down in 2003. The old Church of All Nations building on 2nd Avenue was demolished in 2005, and now, a 12-story apartment complex stands at its old address. In Bradley, Cliff Villa burned down in 1965, and a roadway now cuts through what used to be an open expanse from the house to Fletcher Lake. The original Lee home on Newark has passed out of family hands. And these days, it’s mostly people of a certain age who remember nicknames like Bagel Beach or Chinatown-by-the-Sea. But Bradley Beach remains beloved, with a year-round population of 5,000 that swells to 30,000 in summertime. 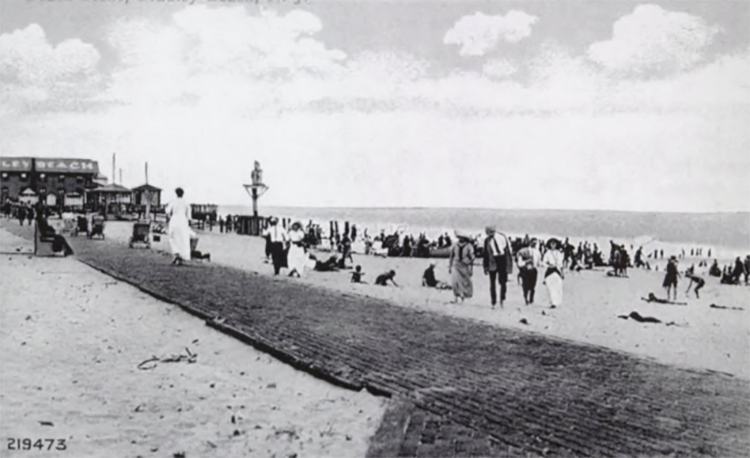 John Mok estimates that there are perhaps 15 to 20 families with roots in Chinatown who still own homes in Bradley Beach, a town just 11 by 7 blocks wide. Mok’s sister is next door. His wife Luella, who went on those church trips to Cliff Villa as a child, is related to five families in Bradley Beach. Two of Mok’s childhood friends from Chinatown, whom he has known since kindergarten, have bought homes in the community too.

Then again, Mok says, his count could be off. “There are some I don’t know. Lately, I’ve noticed a lot of young Chinese I don’t know walking by my house to go to the beach. So there are a lot of generations behind me still coming.”