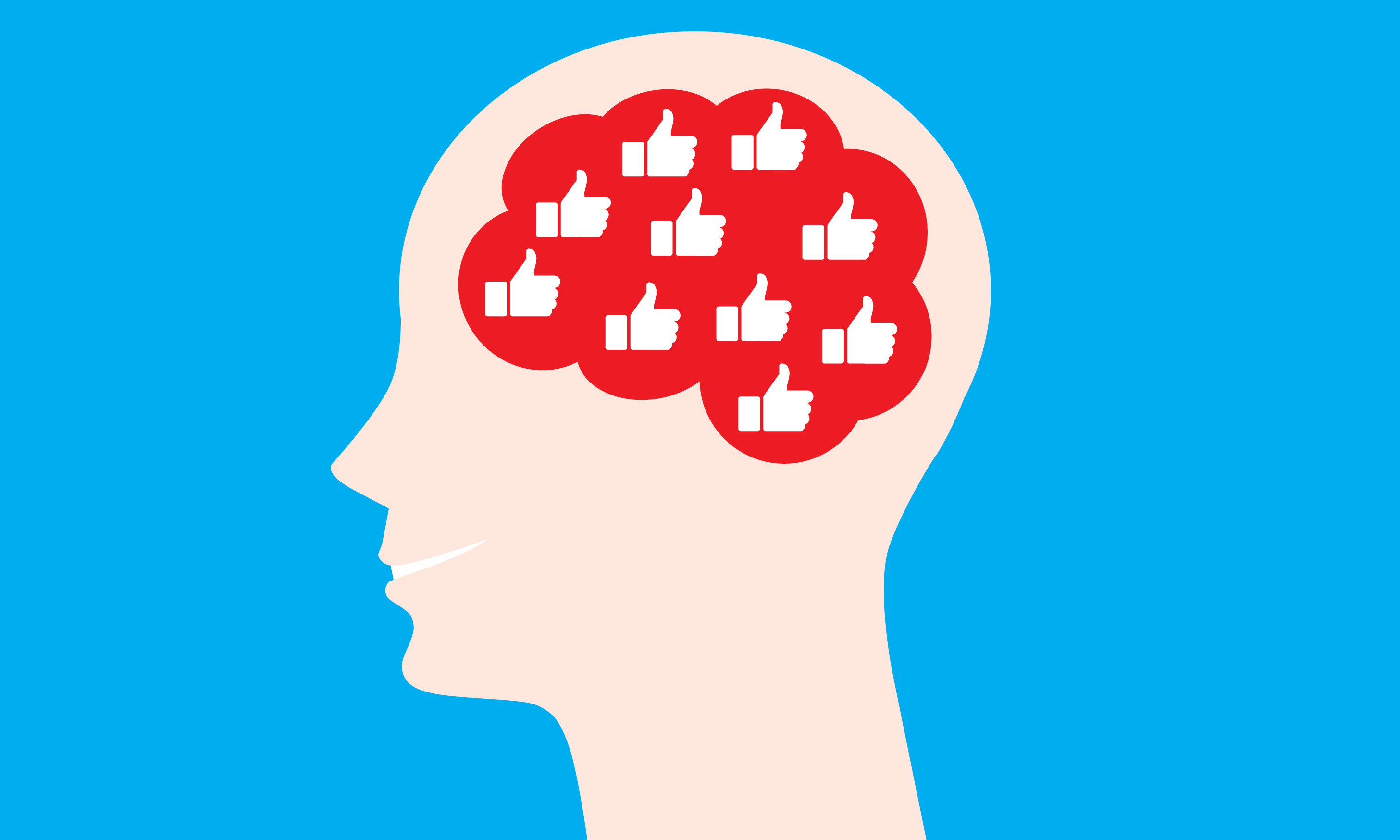 In an unprecedented attack of candor, Sean Parker, the founding president of Facebook, admitted in 2018 that the social network was founded not to unite us, but to distract us. “The thought process was: ‘How do we consume as much of your time and conscious attention as possible?’” he said at an event in Philadelphia that November. To achieve this goal, Facebook’s architects exploited a “vulnerability in human psychology”, explained Parker, who resigned from the company in 2005. Whenever someone likes or comments on a post or photograph, he said, “we… give you a little dopamine hit”. Facebook is an empire of empires, then, built upon a molecule. .

Dopamine, discovered in 1957, is one of 20 or so major neurotransmitters, a fleet of chemicals that, like bicycle couriers weaving through traffic, carry urgent messages between neurons, nerves and other cells in the body. These neurotransmitters ensure our hearts keep beating, our lungs keep breathing and, in dopamine’s case, that we know to get a glass of water when we feel thirsty, or attempt to procreate so that our genes may survive our death.

In the 1950s, dopamine was thought to be largely associated with physical movement after a study showed that Parkinsonism (a group of neurological disorders whose symptoms include tremors, slow movement and stiffness) was caused by dopamine deficiency. In the 1980s, that assumption changed following a series of experiments on rats by Wolfram Schultz, now a professor of neuroscience at Cambridge University, which showed that, inside the midbrain, dopamine relates to the reward we receive for an action. Dopamine, it seemed, was to do with desire, ambition, addiction and sex drive.

Schultz and his fellow researchers placed pieces of apple behind a screen and immediately saw a major dopamine response when the rat bit into the food. This dopamine process, which is common in all insects and mammals, is, Schultz tells me, at the basis of learning: it anticipates a reward to an action and, if the reward is met, enables the behaviour to become a habit, or, if there’s a discrepancy, to be adapted. (That dishwasher tablet might look like a delicious sweet, but the first fizzing bite will also be the last.) Whether dopamine produces a pleasurable sensation is unclear, says Schultz. But this has not dented its reputation as the miracle bestower of happiness.

Dopamine inspires us to take actions to meet our needs and desires – anything from turning up the heating to satisfying a craving to spin a roulette wheel – by anticipating how we will feel after they’re met. Pinterest, the online scrapbook where users upload inspirational pictures, contains endless galleries of dopamine tattoos (the chemical symbol contains two outstretched arms of hydroxide, and a three-segmented tail), while Amazon’s virtual shelves sag under the weight of diet books intended to increase dopamine levels and improve mental health.

“We found a signal in the brain that explains our most profound behaviours, in which every one of us is engaged constantly,” says Shultz. “I can see why the public has become interested.”

In this way, unlike its obscure co-workers norepinephrine and asparagine, dopamine has become a celebrity molecule. The British clinical psychologist Vaughan Bell once described dopamine as “the Kim Kardashian of molecules”. In the tabloid press, dopamine has become the transmitter for hyperbole. “Are cupcakes as addictive as cocaine?” ran one headline in the Sun, citing a study that showed dopamine was released in the orbital frontal cortex – “the same section activated when cocaine addicts are shown a bag of the class A drug” – when participants were shown pictures of their favourite foods. Still, nowhere is dopamine more routinely name-dropped than in Silicon Valley, where it is hailed as the secret sauce that makes an app, game or social platform “sticky” – the investor term for “potentially profitable”.

“Even a year or two before the scene about persuasive tech grew up, dopamine was a molecule that had a certain edge and sexiness to it in the cultural zeitgeist,” explains Ramsay Brown, the 28-year-old cofounder of Dopamine Labs, a controversial California startup that promises to significantly increase the rate at which people use any running, diet or game app. “It is the sex, drugs and rock’n’roll molecule. While there are many important and fascinating questions that sit at the base of this molecule, when you say ‘dopamine’, people’s ears prick up in a way they don’t when you say ‘encephalin’ or ‘glutamate’. It’s the known fun transmitter.”

Fun, perhaps, but as with Kardashian, dopamine’s press is not entirely favourable. In a 2017 article titled “How evil is tech?”, the New York Times columnist David Brooks wrote: “Tech companies understand what causes dopamine surges in the brain and they lace their products with ‘hijacking techniques’ that lure us in and create ‘compulsion loops’.” Most social media sites create irregularly timed rewards, Brooks wrote, a technique long employed by the makers of slot machines, based on the work of the American psychologist BF Skinner, who found that the strongest way to reinforce a learned behaviour in rats is to reward it on a random schedule. “When a gambler feels favoured by luck, dopamine is released,” says Natasha Schüll, a professor at New York University and author of Addiction By Design: Machine Gambling in Las Vegas. This is the secret to Facebook’s era-defining success: we compulsively check the site because we never know when the delicious ting of social affirmation may sound.

Randomness is at the heart of Dopamine Labs’ service, a system that can be implemented into any app designed to build habitual behaviour. In a running app, for example, this means only issuing encouragement – a high-five badge, or a shower of digital confetti – at random intervals, rather than every time the user completes a run. “When you finish a run, the app communicates with our system and asks whether it would be surprising to him if we congratulated him a little more enthusiastically,” explains Brown. Dopamine Labs’ proprietary AI uses machine learning to tailor the schedule of rewards to an individual. “It might say: actually, right now he’d see it coming, so don’t give it to him now. Or it might say: GO!”

While the sell seems preposterously flimsy (with a slot machine, for example, at least the random reward is money, a much more compelling prize than any digital badge), Brown says that the running app company has seen significant positive results. “If you do this properly, we see an average 30% improvement in the frequency of how often a person goes for a run.” Dopamine Labs, which currently has 10 clients, has seen similar positive results with many other kinds of app. In one dieting service, which encourages people to track the food they eat, the company saw an 11% increase in food-tracking after integrating Dopamine Labs’ system. A microloan service saw a 14% improvement in how frequently people would pay back their loans on time or early. “An anti-cyberbullying app saw a 167% improvement in how often young people sent encouraging messages to one another by controlling when and how often and when we sent them an animated gif reward,” claims Brown.

The capacity for so-called “persuasive technology” to influence behaviour in this way is only just becoming understood, but the power of the dopamine system to alter habits is already familiar to drug addicts and smokers. Every habit-forming drug, from amphetamines to cocaine, from nicotine to alcohol, affects the dopamine system by dispersing many times more dopamine than usual. The use of these drugs overruns the neural pathways connecting the reward circuit to the prefrontal cortex, which helps people to tame impulses. The more an addict uses a drug, the harder it becomes to stop.

“These unnaturally large rewards are not filtered in the brain – they go directly into the brain and overstimulate, which can generate addiction,” explains Shultz. “When that happens, we lose our willpower. Evolution has not prepared our brains for these drugs, so they become overwhelmed and screwed up. We are abusing a useful and necessary system. We shouldn’t do it, even though we can.” Dopamine’s power to negatively affect a life can be seen vividly in the effects of some Parkinson’s drugs, which, in flooding the brain with dopamine, have been shown to turn close to 10 percent of patients into gambling addicts.

Brown and his colleagues are aware that they’re playing with fire and claim to have developed a robust ethical framework for the kinds of companies and app-makers with which they will work. “We spend time with them, understand what they’re building and why,” he says. “The ethics test looks something like: should this work in this app? Should this change human behaviours? Does this app encourage human flourishing? If not, does it at least not make the human condition shittier?” To date, Brown claims that Dopamine Labs has turned down both betting companies and free-to-play video game developers, who wanted to use the company’s services to form habits in their players.

Well-intentioned strategies often produce unintended consequences. “I don’t know whether [these apps] can generate addiction,” says Schultz, who, along with two other researchers, was awarded Denmark’s €1m Brain prize in 2017 for discovering dopamine’s effects. “But the idea behind behavioural economics, that we can change the behaviour of others not via drugs or hitting them on the head, but by putting them into particular situations, is controversial. We are telling other people what is good for them, which carries risks. Training people via systems to release dopamine for certain actions could even cause situations where people can’t then get away from the system. I’m not saying technology companies are doing bad things. They may be helping. But I would be careful.”

For Brown, however, co-opting these systems to produce positive effects is the safest and most logical way in which to evolve the human mind, and use a natural molecule to form intentional, positive habits. “We can close the gap between aspiration and behaviour and build systems that enrich the human condition and encourage human flourishing,” he says. “Our product is a slot machine that plays you.”

Dopamine, as one of the major neurotransmitters – the bicycle couriers of the brain – carries many different kinds of message, only some of which are known and understood.

As well as its core function in learning, through identifying the extent to which a reward differs from expectations, dopamine is also vital for movement control, and plays a role in memory, attention, mood, cognition and sleep.

Recent research has shown that dopamine levels are one of the key differentiators between human beings and other apes; Nenad Sestan and André Sousa of the Yale School of Medicine in New Haven, Connecticut discovered that 1.5 percent of the neurons in the human striatum produce dopamine, three times more than in the ape striatum.

“We’re not yet sure of the extent to which our observations explain differences between the human, chimpanzee and other primate brains,” Sestan told New Scientist in November 2017. “But we hypothesise that these cells could contribute to human-specific aspects of cognition or behaviour.”