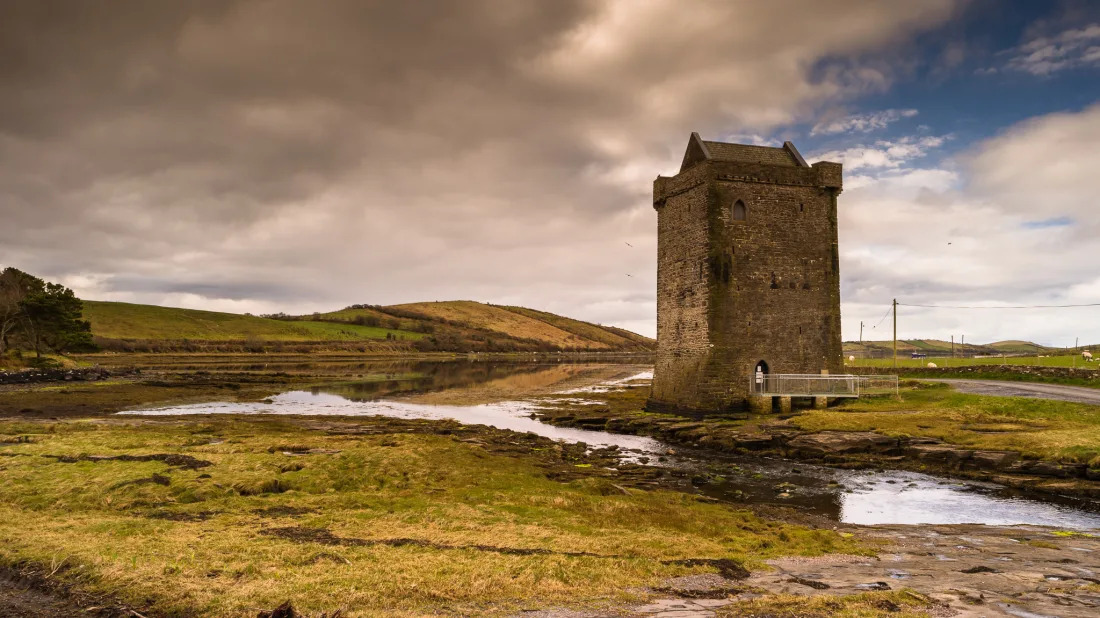 Rockfleet Castle, which Grace O’Malley used as a base. Photo from Mikeoem, Wikimedia // CC BY-SA 4.0.

If asked to name a pirate from history, many people will mention Blackbeard or Captain William Kidd. If pressed to name a female pirate, they might mention Anne Bonny, who terrorized the Caribbean alongside Captain "Calico" Jack Rackham in the early 18th century. Anne Bonny, however, was far from the only female pirate to terrorize the seas. More than a century before Bonny's birth, another woman ruled the waves, debated with Queen Elizabeth I, and sat at the head of a prosperous pirate empire. She was Grace O'Malley, Pirate Queen.

Grace With the Cropped Hair

Known in Gaelic as Gráinne Ní Mháille, Grace was born in Ireland sometime around 1530. She was the daughter of Eoghan Dubhdara Ó Máille, ruler of the territory of Umhall and the lord of an ancient, powerful dynasty in the province of Connaught. The Ó Máille family's money came from the seas, raised in the form of taxes levied on anyone who fished off their stretch of the Irish coast. The family were also shrewd traders and merchants, trading (and sometimes plundering) as far away as Spain. Ó Máille castles also dominated the southwest coastline of County Mayo, providing protection from invasion for the wealthy lord's territory. At a time when the Tudors in England were ramping up their conquest of Ireland, such defensive measures were vital.

The folklore of Grace O'Malley begins in her childhood, when she supposedly begged her father to let her join him on a trade mission to Spain. When he refused his daughter's request on the grounds that her long hair would be hazardous on the rolling deck of a ship, she hacked off her mane, earning herself the nickname Gráinne Mhaol, or “Grace with cropped hair.”

Though little is known of Grace's early life, when she was about 16 she made a political marriage to Dónal Ó Flaithbheartaigh, heir to the lands of Ó Flaithbheartaigh. It was an excellent dynastic match, but despite bearing her husband three children, Grace wasn't made for housewifery. She had more ambitious plans.

Soon Grace was the driving force in the marriage, masterminding a trading network to Spain and Portugal and leading raids on the vessels that dared to sail close to her shores. When her husband was killed in an ambush by a rival clan around 1565, Grace retreated to Clare Island, and established a base of operations with a band of followers. According to legend, she also fell in love with a shipwrecked sailor—and for a time life was happy. But when her lover was murdered by a member of the neighboring MacMahon family, Grace led a brutal assault on the MacMahon castle at Doona and slaughtered his killers. Her actions earned her infamy as the Pirate Queen of Connaught.

Though Grace remarried for the sake of expanding her political clout, she wasn't about to become a dutiful wife. Within a year she was divorced, though pregnant, and living at Rockfleet Castle, which she'd gained in the marriage and which became her center of operations. According to legend, the day after giving birth to to her ex-husband’s son aboard a ship, she leapt from her bed and vanquished attacking corsairs.

Grace continued to lead raiding parties from the coast and seized English vessels and their cargo, all of which did little to endear her to the Tudors. She was known for her aggression in battle, and it's said that when her sons appeared to be shirking, she shamed them into action with a cry of “An ag iarraidh dul i bhfolach ar mo thóin atá tú, an áit a dtáinig tú as?”—which roughly translates as “Are you trying to hide in my arse, where you came out of?”

In 1574 an English expedition sailed for Ireland with the aim of putting an end to her exploits once and for all. Though they besieged Rockfleet Castle, no one knew the coastline better than Grace, and she repulsed them with the might of her own ships.

But Grace made history in 1593 after her son was captured by Sir Richard Bingham, the English governor of Connaught. Appointed in 1584, Bingham had taken office as part of English efforts to tighten their hold on Ireland, and in 1586 his men had been responsible for the death of one of Grace's sons. Bingham also took cattle and land from Grace, which only served to increase her thirst for revenge. Yet she was a politician as much as a warrior, and knew that she couldn't hope to beat Bingham and the forces of the English government single-handedly.

Instead, she took the diplomatic route and traveled to England, where she requested an audience with Queen Elizabeth I to discuss the release of her son and the seizure of her lands. In addition, she challenged Gaelic law that denied her income from her husband's land and demanded that she receive appropriate recompense. She argued that the tumult reigning in Connacht had compelled her to “take arms and by force to maintain [my]self and [my] people by sea and land the space of forty years past.” Bingham urged the queen to refuse the audience, claiming that Grace was "nurse to all rebellions in the province for 40 years," but Elizabeth ignored his entreaties. Perhaps the monarch was intrigued by this remarkable woman, because Grace's request was granted, and the two women met in September 1593.

A Meeting With the Queen 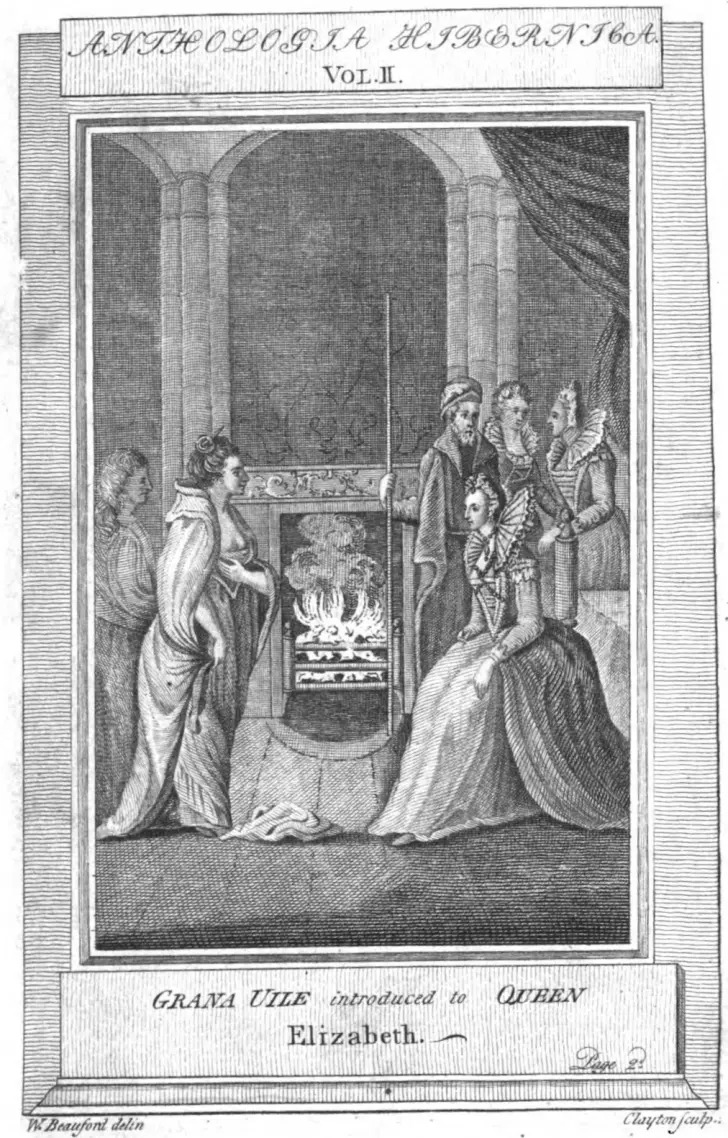 An 18th-century depiction of the meeting between Grace O'Malley and Elizabeth I. Photo from Anthologia Hibernica volume II, Wikimedia // Public Domain.

Grace's Greenwich Palace summit with the queen has become legendary. She supposedly wouldn’t bow to Elizabeth, whom she didn't recognize as the Queen of Ireland. Though dressed in a magnificent gown that befit her status, she also carried a dagger, which she refused to relinquish. The queen, however, was happy to receive her visitor—dagger and all. The summit was conducted in Latin, supposedly the only tongue the two women shared. Ignoring the fact that they were virtually the same age, Elizabeth decided that there was only “pity to be had of this aged woman” whom she believed "will fight in our quarrel with all the world."

By the end of the long meeting, an agreement had been reached. Bingham would be instructed to return Grace's lands, pay her the funds she had demanded, and free her son. In return, Grace would withdraw her support of the Irish rebellion and attack only England's enemies.

Yet the victory was short-lived. Though her son was freed, Bingham’s censure was brief, and Grace received back none of the territory she had lost. Grace was furious, and she soon withdrew from public life.

The last years of Grace O’Malley are shrouded in mystery. It’s believed that she died at Rockfleet Castle around 1603—the same year as Queen Elizabeth I. Her memory lives on, not least in the Irish ballads, which remember her with these verses:

In the wild grandeur of her mien erect and high
Before the English Queen she dauntless stood
And none her bearing there could scorn as rude
She seemed well used to power, as one that hath
Dominion over men of savage mood
And dared the tempest in its midnight wrath
And thro' opposing billows cleft her fearless path.

Additional Sources: Granuaile: The Life and Times of Grace O'Malley; Pirate Queen; Anecdotes of the Aristocracy; "The day the Virgin Queen bowed to the pirate queen," Times of London; A Forgotten Part of Ireland; "Gráinne Mhaol, Pirate Queen of Connacht: Behind the Legend," History Ireland.