Fantasizing About Retirement? Here’s How to Build a Career You Won’t Want to Quit

Your boss is demanding, the tasks are menial, you’re not paid what you’re worth and you can never seem to get enough sleep.

It’s no wonder, then, that a lot of people hate their jobs.

The thing that FIRE (the people who want to retire in their thirties), cryptocurrency junkies and passive-income enthusiasts all have in common is the desire to escape. To get away from the drudgery of work.

Why Escape Isn’t the Answer

The first problem is that work is often necessary. The second problem is that, even if you could run away, you’d end up with the same kinds of problems.

You need money to live, and, assuming you weren’t born with a trust fund, that means you’re going to have to work to earn it. To get that money without stealing, other people have to give it to you. Which means they need to give it in exchange for something they value more.

This value equation is the reason a lot of investing scams don’t work. They trick you into thinking you can get money without adding value in exchange. Real investing does do this—by allowing others to use your money, in exchange for it back later with interest (or profits). Schemes try to bypass this logic, however, to show you that there’s a way you can earn far more for less work and less risk than everyone else can. 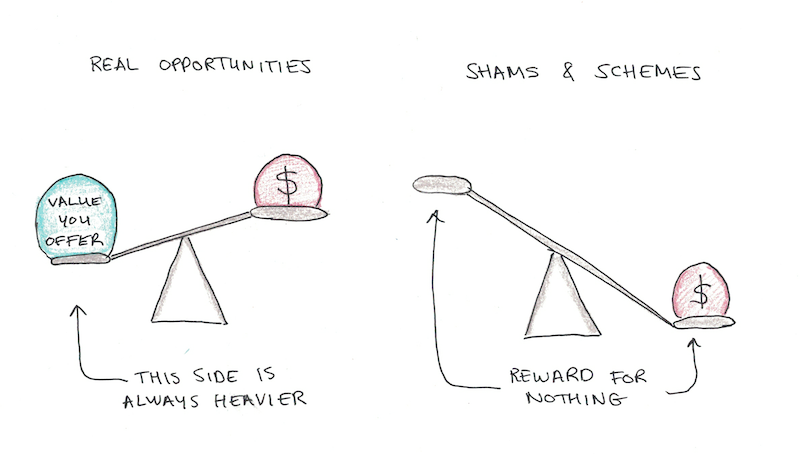 Value, however, isn’t enough. Because we live in a market economy, we’re all competing to deliver it. Which means that the value you offer that everyone else can tends to get bid down to the lowest price.

This competitive equation, shows why most passive-income systems fail. You may be able to automate a system that can generate money while you sleep, but what’s to stop somebody else from doing the same thing and lowering your profits?

Early-retirement enthusiasts manage to avoid this difficulty by living frugally and having an insane savings rate. Done well, you might even be able to shave a decade (or two) from your working life.

However, abandoning work altogether creates a vacuum. What are you going to do with your time? What is going to give you meaning and purpose? Retiring early sounds sexy, until you realize it’s merely a plan to avoid something you don’t like—not a strategy (on its own) to create a life you’ll love. 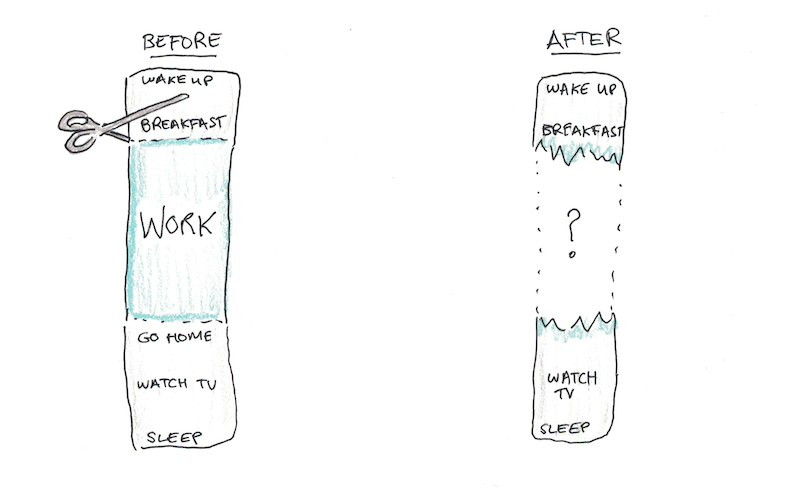 What Should You Do Instead of Running Away?

Most work sucks. But yours doesn’t have to.

It is possible to have a truly meaningful and fulfilling career. One which will challenge you, excite you and make you feel like you have a mission—rather than just a job position.

The classic advice for how to get this kind of work was to follow your passion. Be brave. Quit your job. Go into your dream profession, even though most people don’t make it.

This is dumb advice, and it’s bad for two reasons.

First, follow-your-passion advice creates the same problems as other work-escape strategies I mentioned above. The list of pre-existing passions people think they have is much narrower than the total jobs which exist. People dream of being a dancer, not an office manager.

Since the “passion” jobs are far fewer than the total jobs out there, they tend to be extremely competitive. Thus they pay lower and make it hard to survive. Competition can also amplify other negative tendencies. I can’t tell you how many times I’ve heard of despicable bosses and colleagues in industries people go into for passion. They exist, because in more humdrum pursuits, people wouldn’t put up with it. However, when you’re working in art, film or non-profits, toxic people persist because those following their passion will put up with it.

The second reason this is bad advice is that it’s not even how people get jobs they’re passionate about. Cal Newport, author of So Good They Can’t Ignore You, and my co-instructor for Top Performer, argues that, instead, most people find work they love by building rare and valuable skills.

Don’t Escape Your Career—Master It

Cultivating rare and valuable skills in your work isn’t easy. But it’s the only path to building a life full of meaningful activity that you actually enjoy.

If you can do this, however, then the choice about what kind of life you want to live is completely up to you. You can translate your career capital into an ambitious, high-paying job with responsibilities and lucrative rewards. Or, if you prefer to take it easier, you can negotiate to work less, with more flexible hours and without bullshit work assignments.

Without career capital, you enter every negotiation with a lousy hand. As a result you get less pay, less respect, fewer opportunities and less flexibility to choose the lifestyle you want to live. With that capital, however, you can design the life you really want to live, not just escape from it.