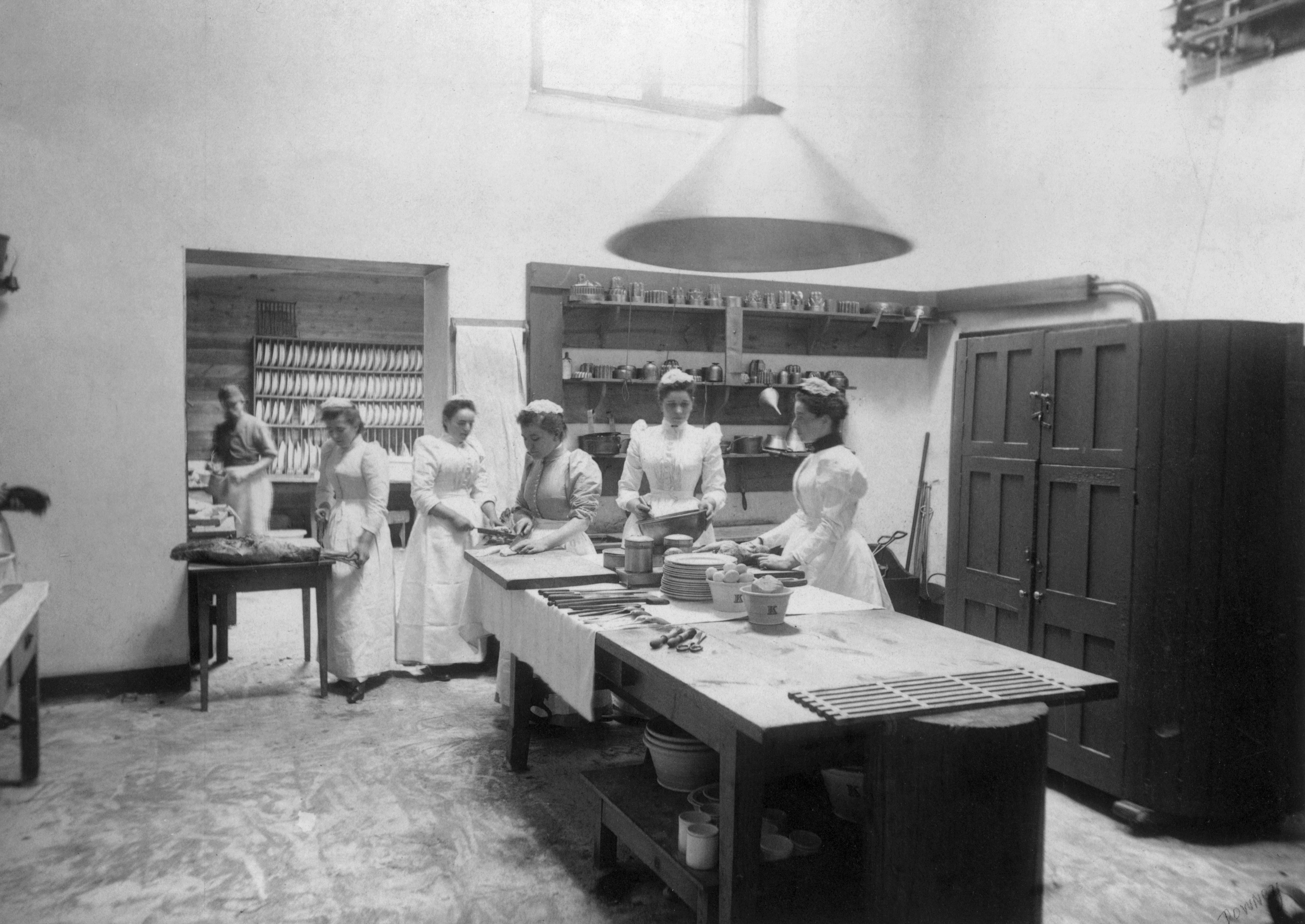 If it wasn't for Eliza Leslie, American recipes might look very different. Leslie wrote the most popular cookbook of the 19th century, published a recipe widely credited as being the first for chocolate cake in the United States, and authored fiction for both adults and children. Her nine cookbooks—as well as her domestic management and etiquette guides—made a significant mark in American history and society, despite the fact that she never ran a kitchen of her own.

Born in Philadelphia on November 15, 1787, to Robert and Lydia Leslie, Eliza was an intelligent child and a voracious reader. Her dream of becoming a writer was nurtured by her father, a prosperous watchmaker, inventor, and intellectual who was friends with Benjamin Franklin and Thomas Jefferson. She once wrote that "the dream of my childhood [was] one day seeing my name in print."

Sadly, her father’s business failed around the turn of the 19th century and he died in 1803. The family took in boarders to make ends meet, and as the oldest of five, Leslie helped her mother in the kitchen. To gain culinary experience, she attended Mrs. Goodfellow’s Cooking School in Philadelphia, the first school of its kind in the United States. Urged by her brother Thomas—and after fielding numerous requests for recipes from friends and family—she compiled her first book, Seventy-Five Receipts for Pastry, Cakes, and Sweetmeats, in 1828. Notably, the book included the term cup cake, referring to Leslie's employment of a teacup as a measuring tool ("two large tea-cups full of molasses")—possibly the first-ever mention of a cup cake in print.

Seventy-Five Receipts was a hit, and was reprinted numerous times. Encouraged by this success—and by her publisher, Munroe & Francis—Leslie moved on to her true desire: writing fiction. She penned short stories and storybooks for young readers as well as adult fiction and won several awards for her efforts. One of her prize-winning short stories, the humorous "Mrs. Washington Potts," appeared in Godey’s Lady’s Book, the popular 19th century magazine for which she also served as assistant editor. Leslie also contributed to Graham’s Magazine, the Saturday Gazette, and The Saturday Evening Post. At least one critic called her tales "perfect daguerreotypes of real life."

As much as Leslie loved writing fiction, however, it didn't always pay the bills. She wrote a second cookbook, Domestic French Cookery, in 1832, and achieved the pinnacle of her success in 1837 with Directions for Cookery. That work became the most beloved cookbook of the 1800s; it sold at least 150,000 copies and was republished 60 times by 1870. She offered pointers on procuring the best ingredients ("catfish that have been caught near the middle of the river are much nicer than those that are taken near the shore where they have access to impure food") and infused the book with wit. In a section discouraging the use of cold meat in soups, she wrote, "It is not true that French cooks have the art of producing excellent soups from cold scraps. There is much bad soup to be found in France, at inferior houses; but good French cooks are not, as is generally supposed, really in the practice of concocting any dishes out of the refuse of the table."

In The Taste of America, noted modern food historians John and Karen Hess called Directions for Cookery “one of the two best American cookbooks ever written," citing the book's precise directions, engaging tips, straightforward commentary, and diverse recipes—such as catfish soup and election cake—as the keys to its excellence.

Leslie is also credited with publishing America’s first printed recipe for chocolate cake, in her 1846 Lady’s Receipt Book. While chocolate had been used in baking in Europe as far back as the 1600s, Leslie’s recipe was probably obtained from a professional chef or pastry cook in Philadelphia. The recipe, which featured grated chocolate and a whole grated nutmeg, is quite different from most of today's chocolate cakes, with its strong overtones of spice and earthy, rather than sweet, flavors. (You can find the full recipe below.)

Later in life, while continuing to write cookbooks, Leslie edited The Gift: A Christmas and New Year’s Present, which included early publications by Edgar Allan Poe. She also edited her own magazine of literature and fashion, Miss Leslie’s Magazine. She wrote only one novel, 1848's Amelia; Or a Young Lady’s Vicissitudes, but once said that if she was to start her literary career over, she would have only written novels.

Historians have argued that Leslie was successful because she crafted recipes to appeal to the young country’s desire for upward mobility as well as a uniquely American identity. At the time she began writing, women primarily used British cookbooks; Leslie appealed to them with a distinctly American work. (She noted in the preface to Seventy-Five Receipts, "There is frequently much difficulty in following directions in English and French Cookery Books, not only from their want of explicitness, but from the difference in the fuel, fire-places, and cooking utensils. ... The receipts in this little book are, in every sense of the word, American.")

Leslie included regional American dishes in her books, promoted the use of quality ingredients, and was the first to (sometimes) organize recipes by including ingredients at the beginning of each recipe instead of using a narrative form, setting the tone for modern recipe writing. Her books were considered a treasure trove of knowledge for young pioneer women who, frequently separated from their families for the first time, often relied on Leslie's works for guidance.

Unmarried herself, Leslie never managed her own kitchen, and often had others testing recipes for her. She maintained strong ties with her erudite, sophisticated family, and lived for a time with her brother Thomas while he was attending West Point. Another brother, Charles Leslie, was a well-regarded painter in England; her sister Anna was also an artist, and sister Patty was married to a publisher who produced some of Leslie’s work. As she got older, Leslie lived for years in the United States Hotel in Philadelphia, where she was something of a celebrity for her wit and strong opinions.

Leslie died on January 1, 1858. Many of her recipes are still used today, but it's likely she’d be most pleased to know that many of her short stories are available online. Modern readers can appreciate the totality of her work: the fiction writing that was her passion, though for which she was lesser known, and her culinary writing, which guided generations.

From The Lady's Receipt Book:

CHOCOLATE CAKE.—Scrape down three ounces of the best and purest chocolate, or prepared cocoa. Cut up, into a deep pan, three-quarters of a pound of fresh butter; add to it a pound of powdered loaf-sugar; and stir the butter and sugar together till very light and white. Have ready 14 ounces (two ounces less than a pound) of sifted flour; a powdered nutmeg; and a tea-spoonful of powdered cinnamon—mixed together. Beat the whites of ten eggs till they stand alone; then the yolks till they are very thick and smooth. Then mix the yolks and whites gradually together, beating very hard when they are all mixed. Add the eggs, by degrees, to the beaten butter and sugar, in turn with the flour and the scraped chocolate,—a little at a time of each; also the spice. Stir the whole very hard. Put the mixture into a buttered tin pan with straight sides, and bake it at least four hours. If nothing is to be baked afterwards, let it remain in till the oven becomes cool. When cold, ice it.