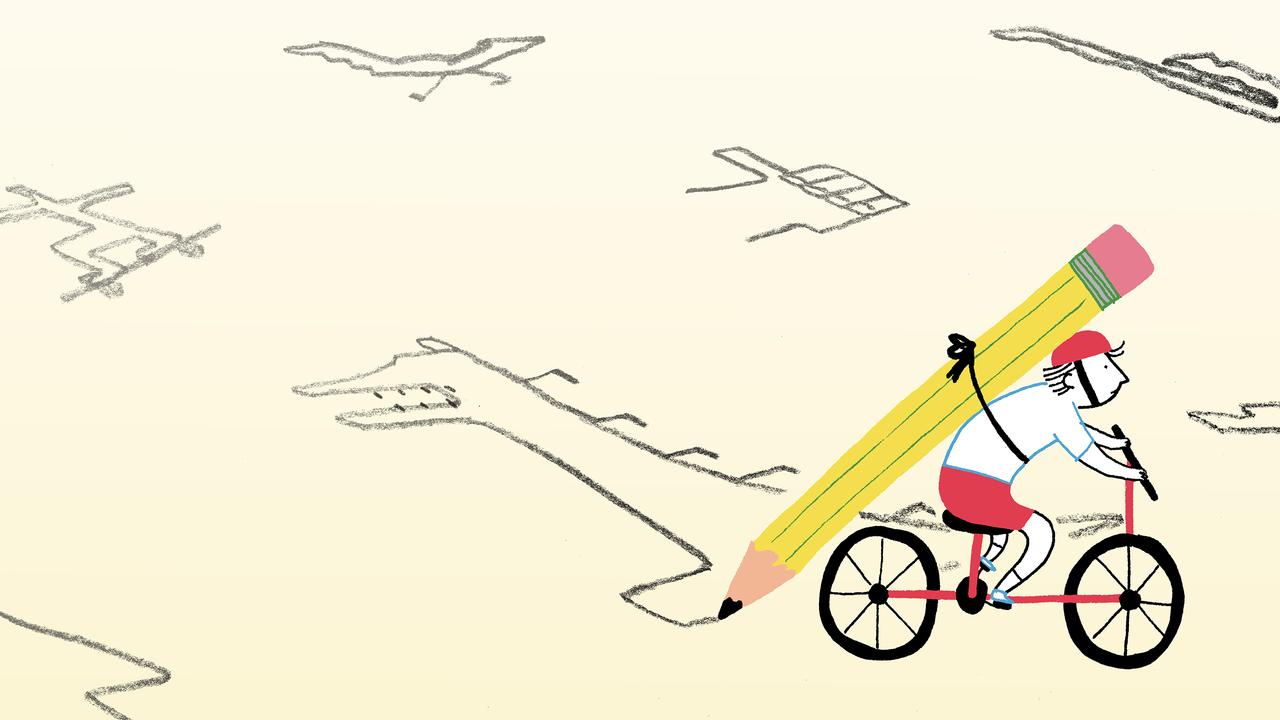 Four miles in, Michael Wallace knew he had a problem. Biking around a city is an annual summer ritual for Wallace, who has lived in the southwest Baltimore neighborhood of Canton since the early 2000's. During a typical day, he might ride anywhere between ten and twenty miles up and down main streets, through alleyways and across parks. He’s sure of where he’s going. He rarely makes mistakes. But on this day in late May 2012, Wallace messed up, and a person lost his shoulder in the process.

Fortunately, it was just a matter of rearranging some pixels.

Since 2010, Michael Wallace has been known in Baltimore’s streets as WallyGPX. Part cyclist, part artist, Wallace digitally traces sketches he draws himself, using a mountain bike, a Samsung Galaxy smartphone, a pair of apps and the power of global positioning system. Wallace’s phone records his ride as he pedals the same course he has previously hand drawn on a map, the result being a dark line of his route saved and superimposed on a Google Map.

“I’ve never been a hardcore road cyclist in any way,” says Wallace, an approachable man of athletic build in his early forties. “Then one day I wondered if I could spell my name with GPS. I spelled the word ‘Wally’ out. During the making of the W, I realized if this works, I could make anything. And then I started making everything.”

Ever since, he has used the city of Baltimore as his canvas, sketching out scores of different images, including turkeys, the Titanic, and sharks — his nod to the Discovery Channel’s annual homage to Great Whites. As of the summer of 2014, Wallace’s sixth summer in which he has made these digital drawings, the count was at 290. That’s 290 individual routes Wallace has biked, all in the name of artwork for which he doesn’t make a dime. 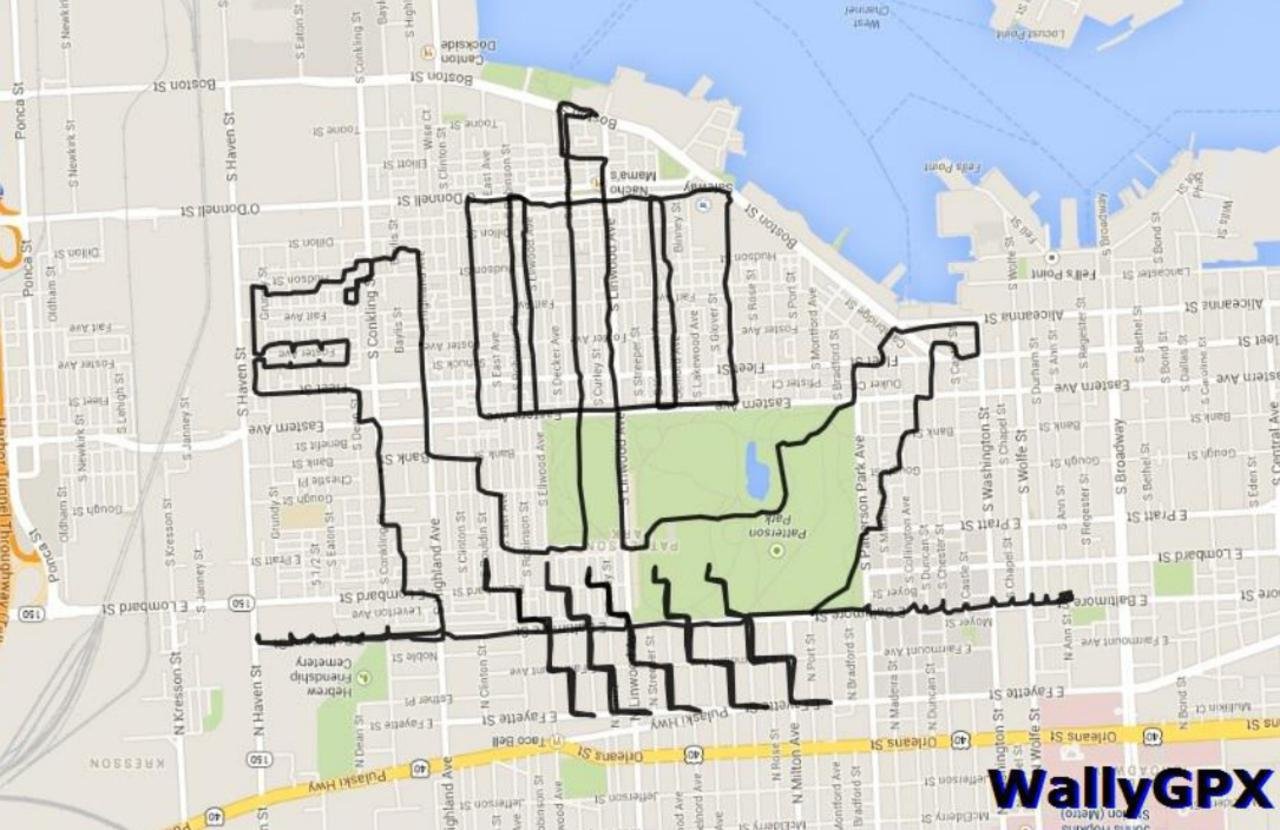 His collection includes a map from May 2012, in which he drew a picture of three Olympic athletes standing atop a podium awaiting their medals. Four miles in, Wallace made a wrong turn as he began GPS-sketching the left shoulder of the gold medalist, which left it completely disconnected from the torso. So he scrapped it, rode back to his starting point, relaunched his two apps, began again, and, nineteen miles later had his finished, unblemished picture.

Like his GPS drawings, Wallace’s personal journey has been made up of different waypoints that, taken on their own, seem only tangentially connected to the next. Taken together, a discernible picture emerges — although, in Wallace’s case, the serendipity of events that brought him to assume the WallyGPX mantle seem like something more than mere coincidence.

He was born in Canton, New York, a small town of about 6,000 people located 470 miles north of Baltimore, near Ottawa and the St. Lawrence River. He studied geology during his undergraduate years at Hartwick College before moving to Colorado for a master’s degree in earth sciences at the University of Northern Colorado.

“I rode my bike everywhere,” says Wallace. “That was my method of transportation.”

For a time Wallace thought he wanted to be an oil geologist, but soon found — perhaps like most young men — that he was becoming more like his father, a college professor. After completing his master’s, Wallace relocated to Charlotte, North Carolina, where he got his first teaching job: middle school science. He’s now in his seventeenth year of teaching, the last twelve as a middle school science teacher at the Gilman School, a private all-boys prep school in the lush north Baltimore neighborhood of Roland Park.

A desire to be closer to home was what brought Wallace back north. A high school friend told him about Canton, a neighborhood tucked away into southwest Baltimore, along the harbor, where residents live in rowhouses with gray formstone facades. It’s just east of the nightlife of Fells Point, and just south of the sprawling Patterson Park, around and through which Wallace completes many of his bike rides today. 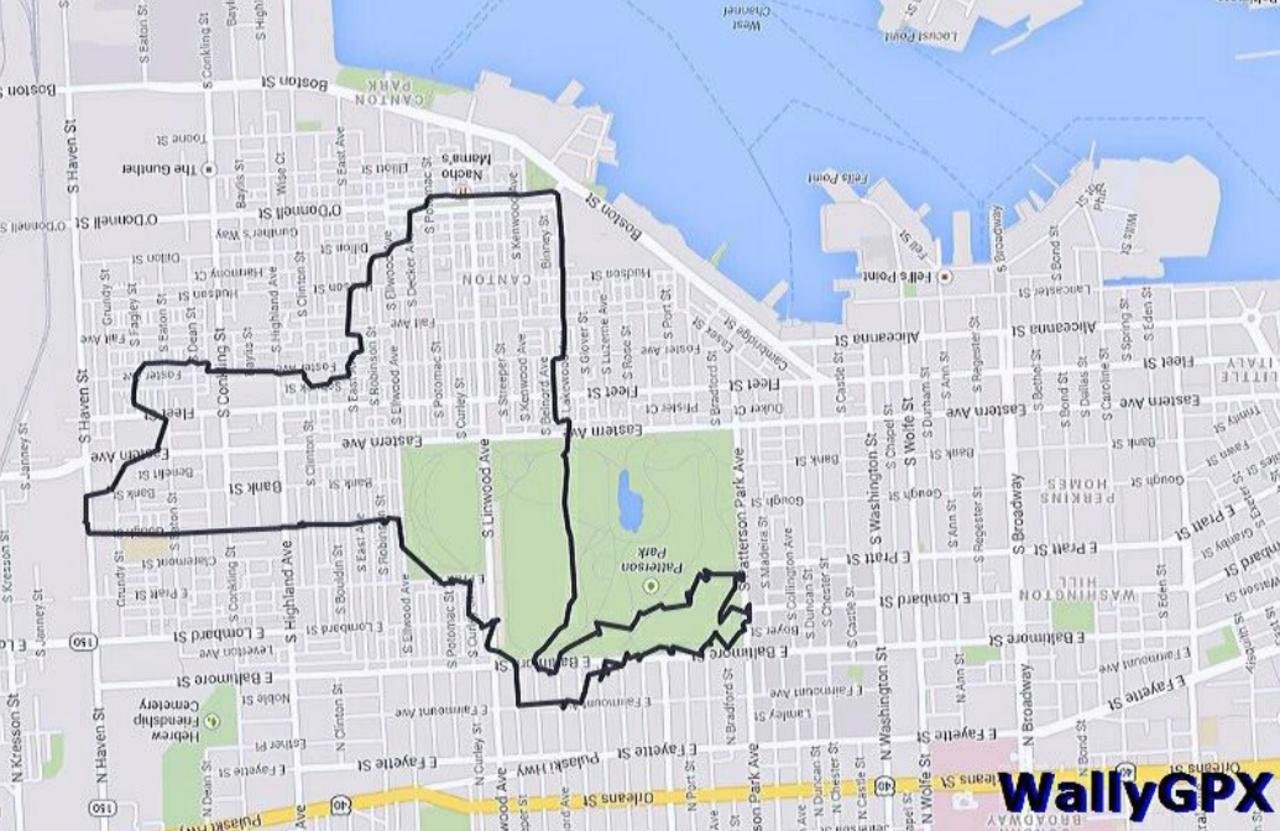 But when Wallace first arrived in Baltimore, the bike he had grown accustomed to riding everywhere was stolen. For about five years he went without one, and then the urge to ride found him again.

At first, getting on a bike was simply for the exercise. At Gilman, Wallace coaches middle school soccer in the fall, assists with varsity golf in the spring and, in between, organizes the floor hockey sessions at school. Staying mobile during the summer months ensures he’s ready once each school year begins again. When Wallace successfully made his first GPS drawing in summer 2010, he just decided he was going to make more of them. In the next three months, he had his first twenty-five.

What he didn’t realize at the time was that those twenty-five drawings would make up his first WallyGPX season. Over the next year he would display some of the GPS images he created — a rattlesnake, a hammer and a likening of Mr. Boh, the monocle-wearing, mustached man who adorns cans of National Bohemian Beer — at an art gallery and performance venue near his home.

“I got a great response to that,” Wallace says. “It kind of inspired me to come back for another season.”

Every subsequent summer since 2010 — and winter 2012 — Wallace has been pedaling Baltimore’s streets, usually outfitted in a T-shirt and shorts, tracking his rides via GPS. He describes his rides as exercise challenges that he “chases,” which explains what has kept Wallace’s interest in being a GPS-biker: the feeling of exhilaration he gets when he designs and completes a ride. That excitement often reveals itself in Wallace’s creative process, pushing him to be more adventurous in his designs. His palette is expansive. Wallace has digitally traced the Loch Ness Monster, the Heisman Trophy, a profile of Ben Franklin and a scene of two men fishing that follows the edge of Baltimore’s Inner Harbor. He hand-sketched the Curiosity Rover as it was landing on Mars in August 2012, and was on the road at nine a.m. the next day making his digital rendering.

While Wallace has grown accustomed to the occasional shouts of “Wally!” from cars as he bikes Baltimore’s streets, his hobby still strikes people as strange and obscure.

“What’s kind of thrilling is that many, many people don’t know about this,” he says. “It’s just this underground pocket of people that are aware.” 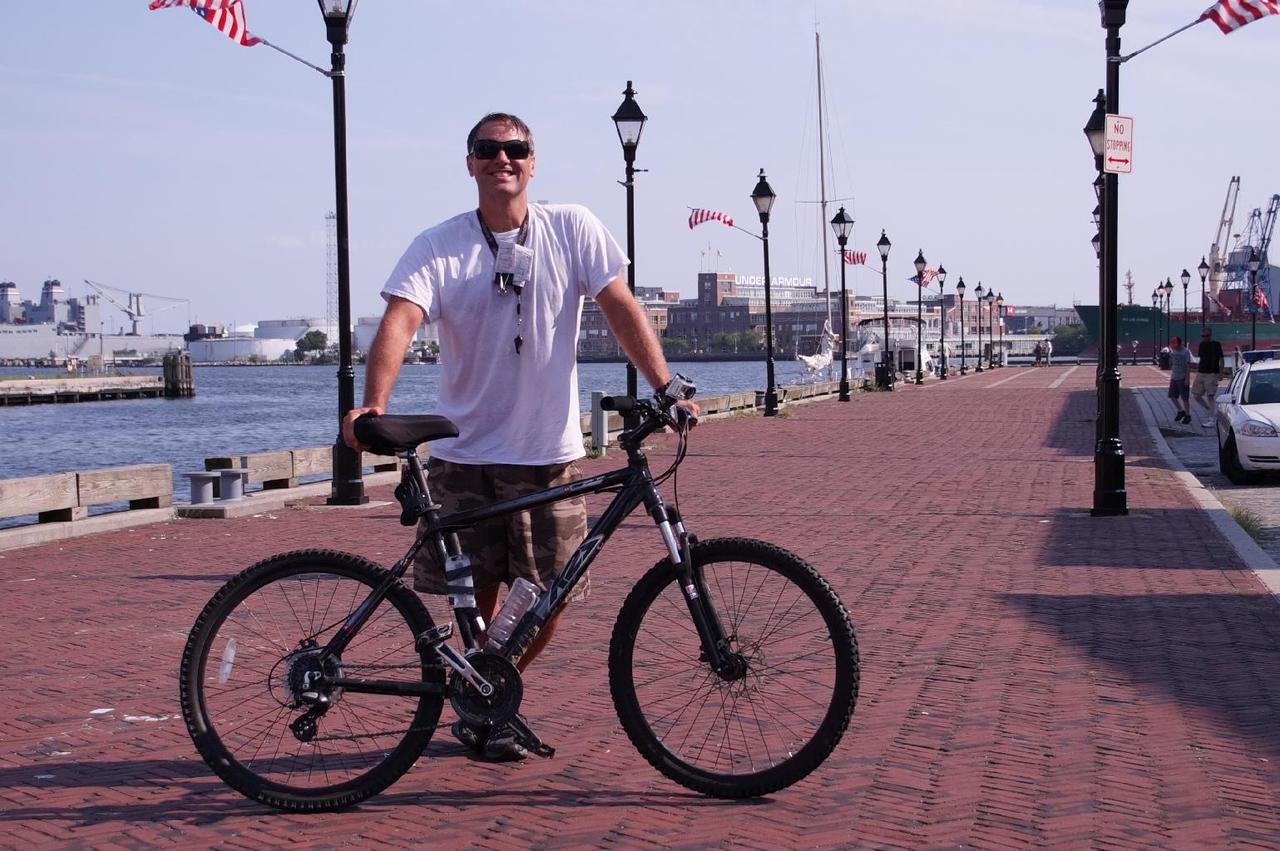 Perhaps that’s why the biggest misconception people have when it comes to Wallace’s rides, he says, is that the phone is telling him where to go. The phone only tells Wallace where he has been; if he makes a mistake, the phone records it.

To begin, Wallace makes pencil-sketches on printed-out Google Maps, continually erasing and redrawing until he has a design he can work with. “That process sometimes pours right out of me and things come naturally. Other times it takes a little while and sometimes I even have to shelve them and come back to them a little later,” he says. Then he jumps online and consults the satellite view on Google Maps to confirm that the pathway he’s trying to take even exists. Wallace says he’ll never climb or jump a fence that’s intended to keep people out — in those instances, he tweaks the design sufficiently to avoid such an obstacle altogether — but fences boxing off Little League ballparks or park benches are simple enough for him to carry a bike over or slide his phone underneath, which is crucial. The GPS sensitivity on Wallace’s phone is set to within six feet of its exact location; even the tiniest of deviations could throw off the drawing he’s setting out to create. To make changes on the fly, Wallace carries a golf pencil along with his printed-out sketch. 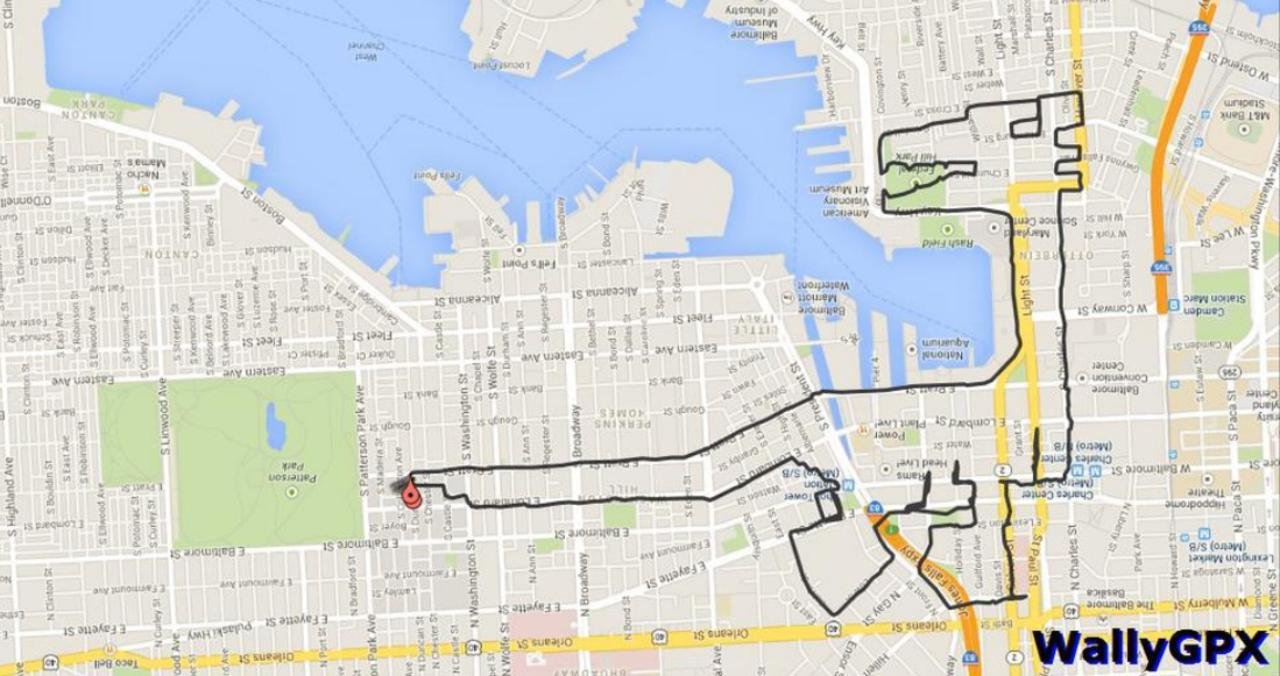 Knowing where to guide his bike — what Wallace calls his “positioning confidence” — requires constant attention.

Peeking has its downside, since flicking beads of sweat that drop onto the smart phone Wallace uses to track his routes has led to him losing the GPS records of several of his rides, which is why Wallace rolls with two apps: My Tracks and MapMyRide. If one closes accidentally, a backup is saved to his phone. Avoiding flat tires is a daily struggle; shards of glass and old chicken bones have punctured the tubes of Wallace’s bike tires more than fifteen times. (Battling “rats and glass” is how he characterizes these two-wheeled summer excursions.) He keeps a spare tube and a tire-patch kit with multiple patches taped underneath the seat of his K2 Zed 4.6 mountain bike.

Sometimes Wallace will have to abandon his bike for short stretches on some of his rides. If he needs to fill up his water bottle, a likely occurrence when riding in the humid, sticky, ninety-degree heat that hangs in Baltimore’s air over the summer, he’s forced to wait outside of bars and restaurants while he convinces someone else to fill it up, in order to ensure he doesn’t lose the signal on his smartphone. On one occasion, to maintain a straight line in his drawing, Wallace was forced to lock his bike up outside of Cross Street Market in South Baltimore, walk his smartphone through the market, leave the phone propped up against a street lamp on the opposite side, then rush back to unlock his bike and zip around the corner before his phone was stolen.

“Sometimes the most difficult thing is what you don’t expect,” he says. “If you get up into certain parts of town that you haven’t been to, and there’s construction going on…sometimes I’ve run into police activity. There’s a reason you can’t go certain places.” What he calls “phantom roads” — roads which appear passable on the map, but aren’t in real life — are a constant threat. During his final ride of summer 2012 — the span in which he made seventy-seven pictures, the most he has made in a single summer — such a road was the cause of an extra bump on the African continent, which could probably be forgiven: Wallace was sketching out one of his most ambitious rides to date, a thirty-two-mile map of the world he titled ‘Continental Drift’. “That’s the one I held off intentionally all summer long so I had something that was important for me to look forward to,” he says.

When he completed that ride, he stopped at the side of the road — face and arms drenched in sweat — raised his fists above his head, and held an impromptu celebration by himself.

“I sort of always found a way to take things and make them my own my whole life no matter what they are,” Wallace says. “If you’re chasing these pictures you don’t even realize how much exercise you get. I don’t know why I’m so excited about [this] still, other than I picked it and it picked me.”

Wallace had hoped to make fifty pictures in the summer of 2014, which would have put him at 300 drawings total. He missed his mark by ten, although he doesn’t see this as an unaccomplished goal.

“This style of exercise, it doesn’t end when the goal gets scored or when the last out is made or the buzzer runs out — it ends when the picture’s completed,” he says. “I have probably fifty to sixty plans that are just sitting in this folder that I can pull, any of them, that I want and ride them.”

Which means it’s very likely Wallace will be crisscrossing Baltimore’s streets next summer completing more drawings by bike. “It’s really been a perfect fit for me — blending technology with creativity and exercise is exactly what I need at this point in time in my life,” he says.

One day, though, Wallace would like to hand off his project to someone else; he sometimes mutters that being a GPS cyclist isn’t something he can do forever, and he has already designed his final ride — a hand holding a torch, as if it’s being passed to the next incarnation of WallyGPX.

But not yet. For now, Wallace pedals on. 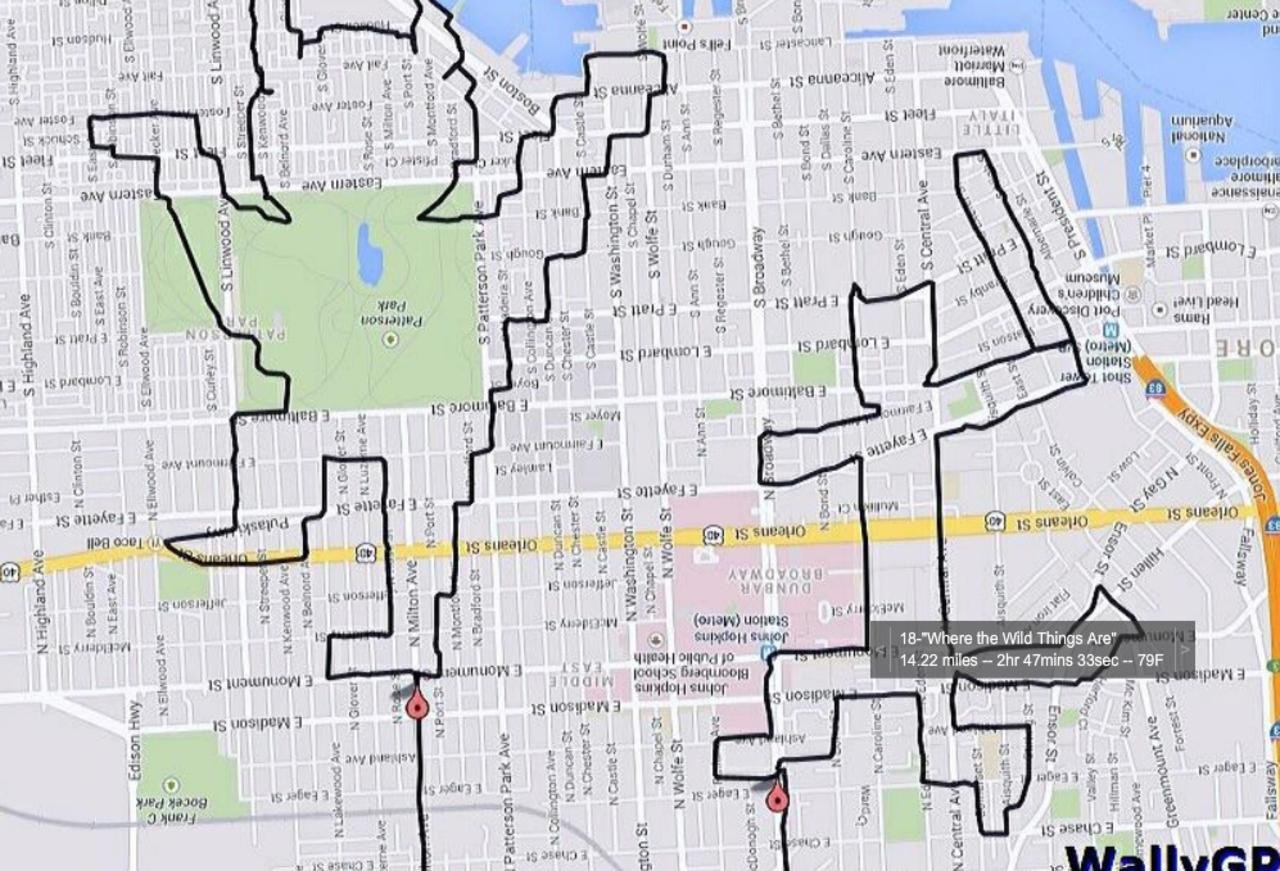