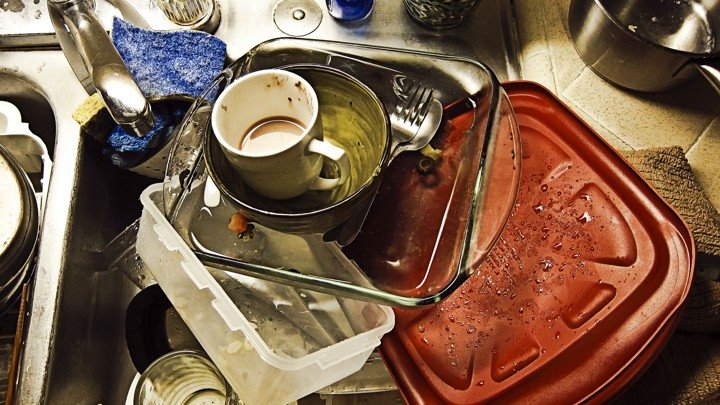 Every day, they slowly accumulate. Plates covered in sauces and crumbs. Bowls with a fine layer of sticky who-knows-what. Forks, knives, and spoons all gummed with bits of this and that. At the end of a long day of work, cooking, cleaning, and, for many, negotiating with small children, a couple has to face the big question: Who is going to do the dishes?

A 2018 report from the Council of Contemporary Families (CCF), a nonprofit that studies family dynamics, suggests that the answer to that question can have a significant impact on the health and longevity of a relationship. The study examined a variety of different household tasks—including shopping, laundry, and housecleaning, and found that, for women in heterosexual relationships, it’s more important to share the responsibility of doing the dishes than any other chore. Women who wash the vast majority of the dishes themselves report more relationship conflict, less relationship satisfaction, and even worse sex, than women with partners who help. Women are happier about sharing dishwashing duties than they are about sharing any other household task.

What is it about dishes? Dan Carlson, an assistant professor of family and consumer studies at the University of Utah, and the lead author of the study, offers one possible reason: “Doing dishes is gross. There is old, moldy food sitting in the sink. If you have kids, there is curdled milk in sippy cups that smells disgusting.” Additionally, unlike some other chores such as cooking or gardening, doing dishes well does not beget compliments, he observes: “What is there to say? ‘Oh, the silverware is so … sparkly’?”

The most unpopular household tasks, Carlson told me, also tend to be the ones most often associated with women. Traditionally, women have shouldered full responsibility for chores that involve cleaning up after someone else: doing the laundry, cleaning the toilet, washing dishes. Men, on the other hand, are often associated with mowing the lawn, taking out the trash, washing the car—tasks that don’t require getting up close and personal with somebody else’s daily grime. Today, women who have to shoulder those traditionally female chores alone “see themselves as relegated to the tasks that people don’t find desirable,” Carlson said. That breeds resentment.

Over the past several decades, men have assumed a greater share of household chores. Today, they perform an average of four hours of housework every week, compared to two in 1965. Dishwashing is actually one of the tasks partners are most likely to take turns doing: Between 1999 and 2006, the share of couples who divvy up dishwashing responsibilities rose from 16 to 29 percent, according to the CCF report. This may make it all the more annoying for women who still find the task falling to them. If a woman goes over to a friend’s house and sees a male partner handling or helping with the dishes, Carlson told me, she’s likely to feel worse about her own arrangement. “The more often a task is shared, the worse it is for you not to share it,” Carlson said.

Couples who do share dishwashing responsibilities seem to have better relationships. According to Carlson, that’s because a couple can do dishes as a team. When partners each handle some portion of the household tasks, they divide them in one of two ways. They either split the chores—“you cook, I do dishes,” or “you cook Monday, I’ll cook Tuesday”—or they do them together, at the same time.

More than many other household chores, dishwashing can be broken down into distinct roles: You wash, I’ll dry. You rinse, I’ll load. “My wife and I could take out the trash together, we could clean the toilet together, but that wouldn’t make much sense,” said Carlson. The nature of dishwashing, on the other hand, encourages couples to stand in the kitchen together and work simultaneously until the job is done. That kind of teamwork, especially when practiced regularly, often makes partners feel more connected, ready to tackle the gross and the curdled, in and outside of the sink.

Caroline Kitchener is a former associate editor at The Atlantic, and the author of Post Grad: Five Women and Their First Year Out of College.