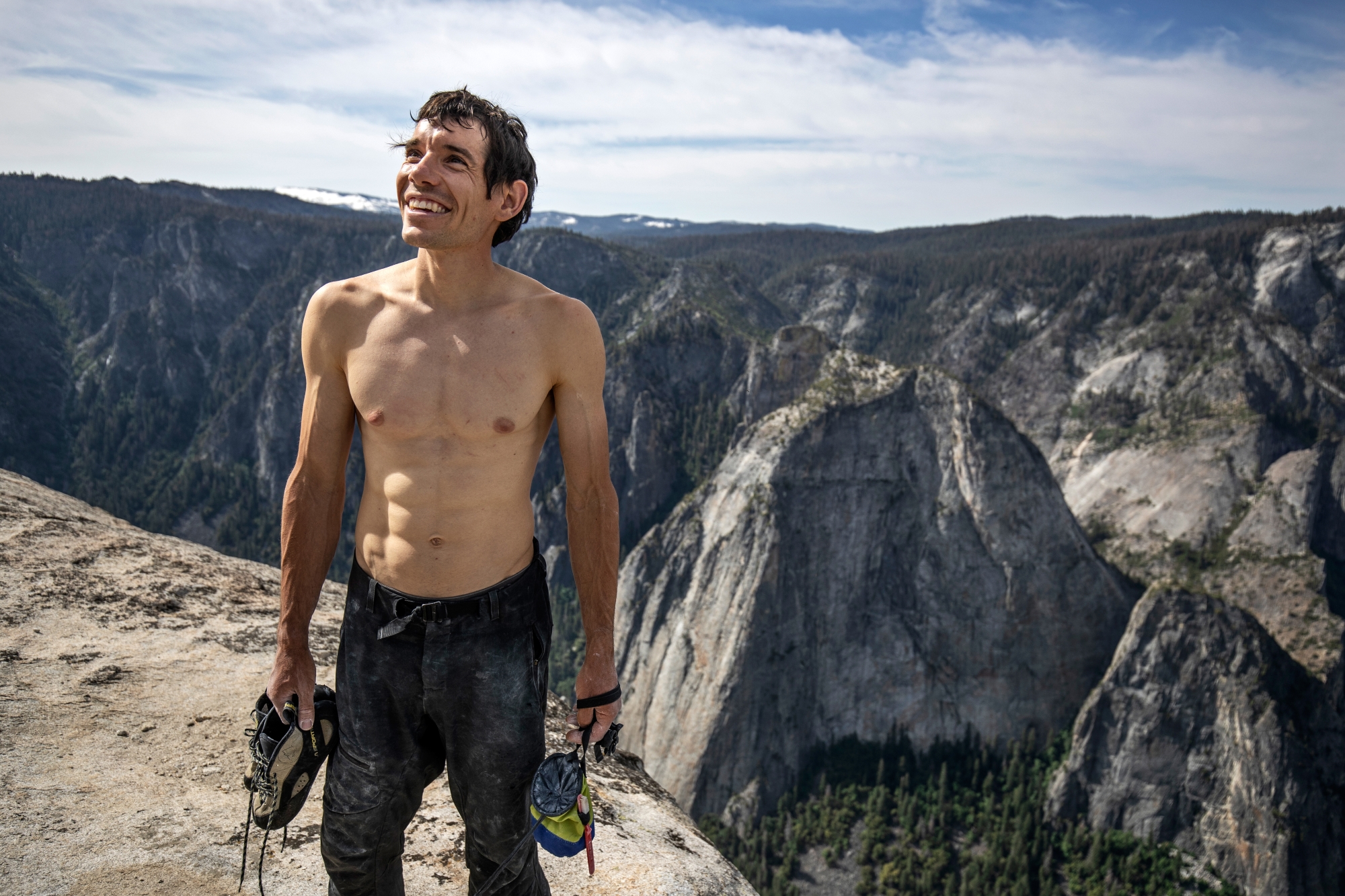 Alex Honnold atop El Capitan. In 2017, he became the first person to summit the cliff without a rope, a feat chronicled in 'Free Solo.' Photo by Jimmy Chin / National Geographic.

Movie theaters would have been wise to include Dramamine along with tickets purchased for Free Solo. Nausea-inducing in the most spectacular way, the documentary chronicles rock climber Alex Honnold’s rope-less ascent in 2017 of Yosemite’s El Capitan, a vertical cliff face twice the height of the Empire State Building.

The feat, widely considered the greatest in the history of rock climbing, required years of preparation. Free Solo takes viewers into that process and ultimately right alongside Honnold for the climb itself, which was filmed from multiple angles. It is impossible not to look away from dizzying shots of Honnold spidering his way up the cliff — including a section 1,800 feet high called the “Boulder Problem,” more or less a glass-flat granite wall. The risk of death becomes a meta-narrative.

“We asked ourselves about the ethics of doing this,” says Chai Vasarhelyi, who directed the film with her husband, the celebrated climber and mountaineer Jimmy Chin (the couple also directed the acclaimed 2015 climbing documentary Meru). “Could we live with ourselves if we enabled [Alex’s death]? It came down to the film itself being about a life well-lived. Alex has made a very conscious choice to do what he loves.”

That choice, of course, has consequences, especially for those close to him. Much of the documentary explores that idea through a portrait of Honnold’s relationship with his girlfriend Sanni McCandless, who emerges as both an accomplice and a foil in his adventure. In that way, the film is almost as much a meditation on love as it is an unflinching depiction of a mind-boggling athletic achievement.

In person, 33-year-old Honnold, just under six feet tall and gangly, is as captivating as he is onscreen. His eyes are so large that the crew on Free Solo referred to him as “Bambi,” yet they’re also shark-like — eerily calm and penetrating. Before the movie’s premiere, he spoke with Rolling Stone about depression, spirituality and what he believes happens when we die.

In Free Solo, you describe how a body falling from El Capitan would “explode on impact.” You’ve really thought a lot about that?
Of course. It’s terrible but that’s reality. And the way I see it, if that scenario of falling to my death is totally overwhelming, then I shouldn’t be up there in the first place. It’s funny because I’ve done a lot of interviews where people have asked me if I’ve considered that fact that I could die. And sometimes I’ll say, “Well, have you?” I can kind of tell from their face that they haven’t. We’re all gonna go at some point.

Did you set any boundaries for the filmmakers about what they could show?
No way, I never even thought about it. That’s like the same thing as climbing. If you’re going to do it, do it right and just go all in.

There is a moment when you fill out a medical questionnaire and come to a question about depression, but the camera cuts before you answer.
It’s funny you mention that, because even when I see that in the film it gives me pause. Depression is tough to define. If a person’s emotional spectrum is between one and 10, my whole life falls somewhere between four and six. I’m about a 5.3, I’d say. Everything is pretty mellow for me. That could mean I’m always depressed or I’m never depressed. My girlfriend definitely fluctuates more from two to nine. She has a much wider range.

Your relationship with her drives the story forward just as much as your climb. But you admit in the movie that you can be a bit callous as a boyfriend. Several times you seem to blame her for setbacks in your climbing career, including when you injure your ankle while climbing together.
Well, I’ve been pleasantly surprised by the positive feedback from audience members so far, who have said that we have a beautiful relationship and it’s presented so honestly. Because when I watch it, I definitely see the unkind things I say.

What has been her reaction to watching those moments in the film?
She’s a very strong, proud person. And since the film’s been finished she’s pushed back at me. She’s said, “You should stand up for this relationship more and be more assertive about what you get out of it.” I can be pretty bad sometimes about communicating nice things and she’s there to remind me of that.

What’s it like seeing yourself onscreen?
Sometimes I cringe. There’s a section in the movie where I’m climbing in Morocco. You can hear me talking onscreen about being a warrior and being a gladiator — but that’s just because I was binge-watching all four seasons of the TV show Spartacus. When I hear myself in the film now, I’m completely embarrassed, but at the time I was like, “Dude, Spartacus is awesome!”

How conscious were you of the camera’s presence?
For free-soloing, it’s pretty easy to ignore distractions. On El Cap, I think there were seven or eight cameras but spread out over 3,000 feet, so I still felt very much alone up there. But the real challenge for me was filming all the social interactions and normal life with my girlfriend. Eventually I got used to it. By the end, my girlfriend and I were able to have hard conversations in my van and kinda ignore the fact that there’s this other guy with a camera hanging out a few feet away from us.

The film shows you memorizing all your climbing moves, repeating each tiny detail out of a notebook. Can you explain that process?
It’s about imagining it and thinking it through and feeling my body float through the moves. Climbing moves are all about feeling it, and that is something I’ve spent my whole life doing.

The notion of God is absent from Free Solo. With a movie like this, the audience might expect a scene where everyone is praying for your safety. But you’re not into that?
No, I’m very anti-religion. I think it’s all just medieval superstition. Religion relies on some desire for a spiritual connection and I do get that from just being out in Yosemite. I get that feeling of grandeur and awe in the world sitting on a cliff at sunset, watching the mountains glow pink, that a lot of people get through religious faith.

Do you think that your being an atheist is linked to your attitude about death?
I’ve certainly thought about my mortality more than most. I think some people turn to faith as a crutch, to avoid thinking about mortality — you know, “Well, I’ll carry on forever in some eternal kingdom.” But the harder thing is to stare into the abyss and understand that when it’s over, it’s over.

What does it feels like to stare into that abyss?
Being on big granite walls is a constant reminder that nature just does not care. You’re just another animal that slipped off something. I’ve seen animals fall off cliffs. I saw a mountain goat bite it in Mexico, which was crazy because you think of them as being so majestic and sure-footed. He survived, actually, and just got back up. I saw a squirrel fall off a cliff once. I was like, “Holy shit, even squirrels!” That’s nature, you know.