On first glance, a typical Athens polikatoikia doesn’t necessarily look like the answer to a host of urban issues. Built quickly and on the cheap — mainly from the 1950s to the 1980s — these modernist apartment buildings (pronounced “Pol-i-kat-i-KEE-A”) line street after street in the Greek capital, their repeated concrete facings and endless lines of unfurled balcony awnings giving the city an appearance of remarkable consistency. They may lack the elegance of Athens’ earlier neo-classical housing, but they have helped to create a city that is vibrant, socially integrated and (until recently) affordable, in which most residents’ housing offers broadly good living conditions. It’s probably fair to say, however, that the buildings have managed all this more or less by accident.

When the polikatoikias (the term simply means condominium) were spreading across Athens in the 1950s, they did so in a city with urgent housing needs and little money to spend. At the time, people were flooding to Athens from the provinces — a trans-European phenomenon made more intense in Greece by the civil war that finally ended in 1949, which provoked many to flee a partly devastated countryside. New Athenians needed homes fast, but the state lacked the funds and will to construct public housing, and banks were offering few loans.

To solve this conundrum, Greeks created their own funding system called antiparochi, in which developers saved themselves the cost of buying land by giving landowners a share of the constructed units when they were completed. “The best translation of the term is probably ‘flats for land,’ or as some people say, ‘quid pro quo,’” says Panos Dragonas, an architect and professor at Greece’s University of Patras. “The system saw landowners hand over their property, and in return get, say, two to five apartments back in the completed building to live in, or rent or sell. It was a bottom-up system of housing development not created by any law change by the government, though the state did offer motives for construction by granting tax breaks. 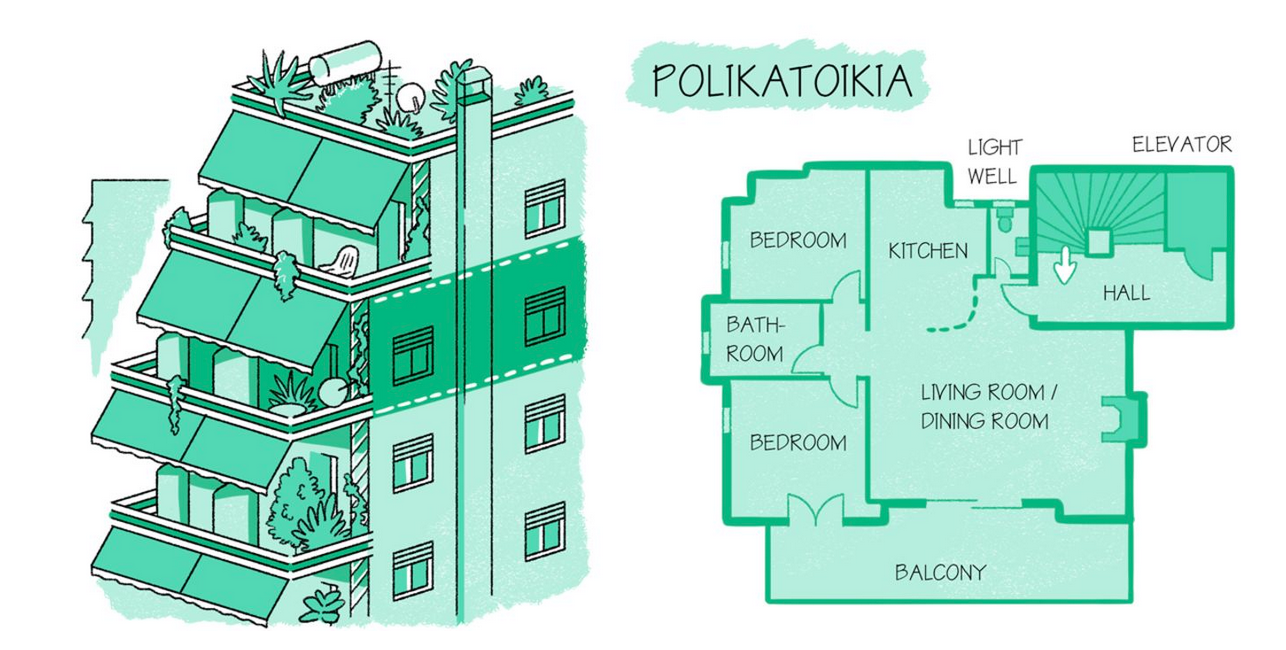 To keep costs down, developers adopted a modernist construction model — the Le Corbusier-developed Dom-Ino system, in which reinforced concrete pillars freed a building of the need for load-bearing interior walls. In Athens, this permitted the creation of a sort of modernist tenement. Industrial in construction, it was still aligned to a traditional street in densely packed urban neighborhoods, with differing building heights and lengths giving a haphazard, un-regimented impression.

Despite the fast construction — usually to a civil engineer’s design rather than an architect’s — the generally family-sized apartments (i.e. 2-3 bedrooms) were often pleasant places to live. With deep, often wrap-around balconies that were frequently large enough to fit a full-sized dinner table and a wall of plants, the apartments had communal central heating (still a novelty across Europe in the 1950s), spacious common areas and surprisingly solid construction.

The state contributed little or no cash to these buildings, but it did place limits on some aspects of their design. It ensured, for example, that any polikatoikia rising above six floors was set back in tiers from that floor upwards. This created a characteristic Athenian roof-scape, in which little ziggurats of penthouse-style flats, with broad wrap-around terraces, could be found topping many buildings, even in less wealthy areas. 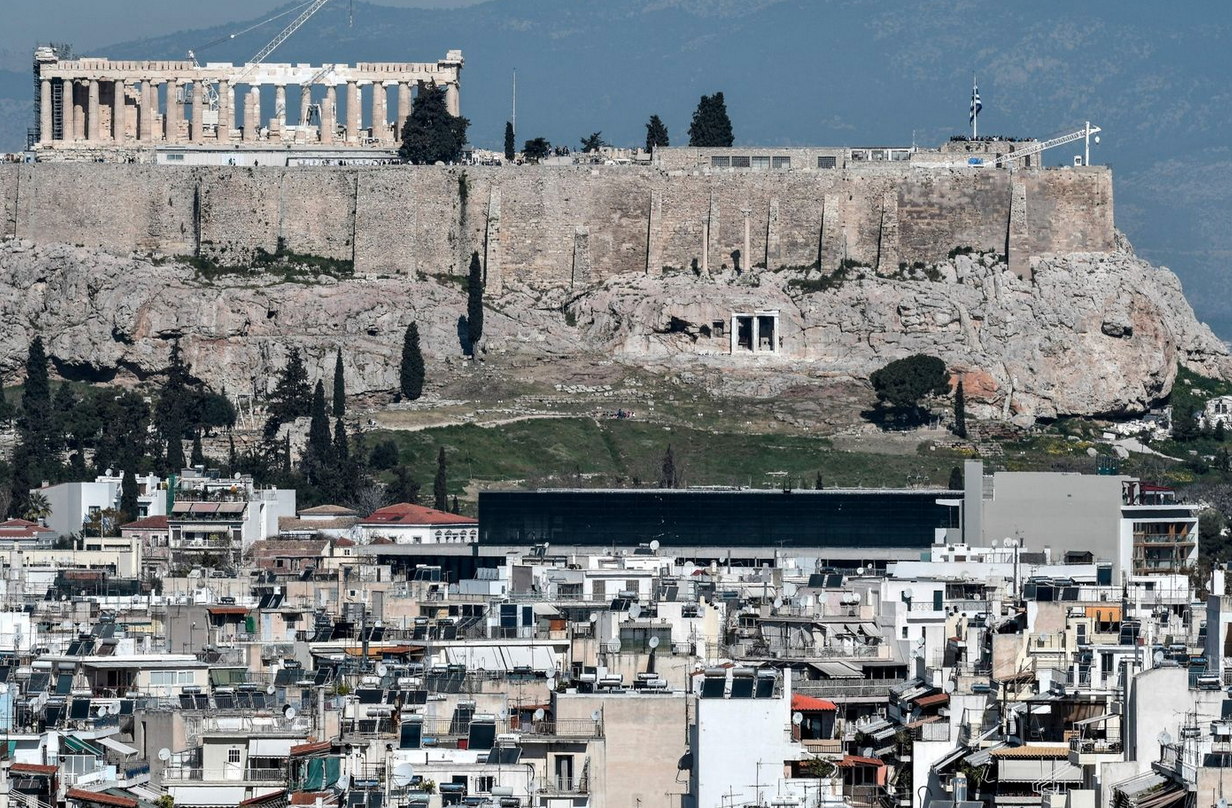 Older polikatoikias in the Koukaki area of Athens, near the Acropolis.
Photographer: Louisa Gouliamaki/AFP via Getty Images

The resulting variety of apartments within the same building ensured a good deal of social mixing. “There were wealthier people on the upper floors,” says Dragonas, “people who had just arrived from the countryside further down and poor students in the basement. That sort of vertical stratification inside a five-story building helped Athens to avoid horizontal stratification — there weren’t really neighborhoods that were only rich or only poor. And the polikatoikias in the richest and the poorest areas were more or less the same building.”

Not that these buildings were exclusively residential. The municipality of Athens only practiced zoning for heavy industry, leaving people free to set up shop in a polikatoikia. Even today, these buildings are often hives of activity, mixing offices, medical practices and even the odd workshop among homes. According to Dragonas, this was “a cancellation of all the problems of modern urban planning, just by mistake. No one had thought about it, but the result was a fantastic mix of uses within a small-scale building. That’s why the streets of Athens have a wonderful level of life all day, all night and all week.”

The polikatoikias weren’t perfect, of course. While they seem to be aging quite well, plumbing and insulation were not always given proper attention. In poorer quality apartments, there might be full windows only along the balcony side of the apartment, their kitchens only lit naturally by dingy light wells. This problem would probably be more resented in a colder, northern country. Greeks, living in a country with all-year sunshine, are usually more concerned with keeping out heat than letting in light. Even on winter days, many Athenians don’t bother to raise the awnings shading their apartment windows.

The financial crisis of 2007-2008 exposed more serious problems — notably how to keep the buildings heated and lit. Polikatoikias are heated from a central boiler for each building, and after the crisis, many Athenians facing unemployment or slashed wages could no longer afford winter heating. If two or three homes or offices in a building decided to stop paying service charges, and do without heat, everyone else in the building had to either cover the missing costs or do without heating themselves.

Many chose to ditch the heating altogether and even now many Athens apartment buildings get through winter solely with the odd blast from their air conditioning units, which in Greece can also be turned to a warm setting. Meanwhile, that bottom-up model of construction and ownership is coming back to haunt the polikatoikias: as original owners have bequeathed their homes to several children, a building can have up to 70 joint owners, making decisions about even basic renovation impossible.

If this makes the polikatoikias sound a little grim, a visit to a street of them some warm evening shows how successful they can be. Up above, families sit eating and chatting on flower-filled balconies, while at street level people relax on cafe terraces shaded by orange trees, well-fed local cats curling round their ankles. Lights click on and off as businesses shut and homes open, and the presence of other people is always evident without feeling intrusive. The buildings help create a city that feels simultaneously lively and at ease, both modern and many thousands of years old. Other European cities may have more obviously pretty residential streets. Few elsewhere feel more effortlessly inviting.

Feargus O'Sullivan is a writer for CityLab in London, focused on European infrastructure, design and urban governance.