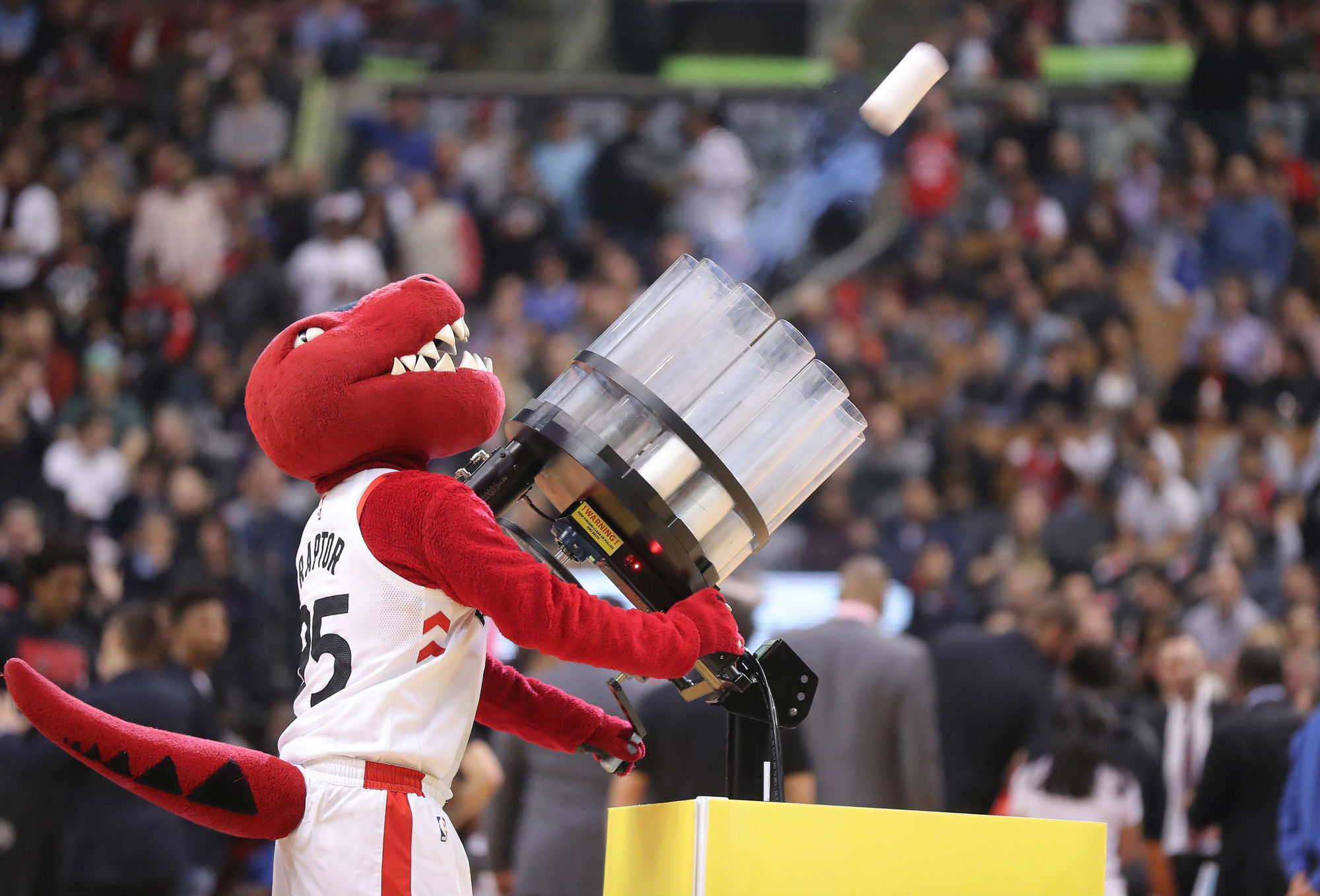 As the mascot for the San Antonio Spurs from 1983 to 2004, Tim Derk—also known as the Coyote—was constantly looking for ways to make the live game experience better for fans. In addition to dancing, antagonizing players, and engaging with attendees, Derk did what many mascots do to raise morale: He gave the crowd free stuff.

Shirts, hats, and other apparel were tossed out on a regular basis, though the gifts were limited to the ability of a mascot’s throwing arm. Which meant that fans seated in the upper bleachers didn’t get much of anything, except maybe a nosebleed.

Derk and the other mascots used huge rubber bands to propel shirts to those people seated higher up in the stands, but even those had limited range. Then, in the 1990s, Derk and his peers decided to become apparel arms dealers. They designed and fabricated a massive, 90-pound cast-iron pipe 4 feet in length that used the pneumatic principle to blast T-shirts into the air and into the arms of fans.

Once Derk strapped it on for an appearance during a game as “Rambote,” sports would never be the same again.

The T-shirt cannon can be traced back to Britain during World War II, when sailors on commercial freighter ships were left vulnerable after their anti-aircraft weapons had been rerouted to warships. Desperate to protect themselves from enemy attack, the sailors adopted a weapon developed by the Department of Miscellaneous Weapons Development. Dubbed a Holman Projector, it could shoot projectiles out of a tube using steam from the ship’s boiler. 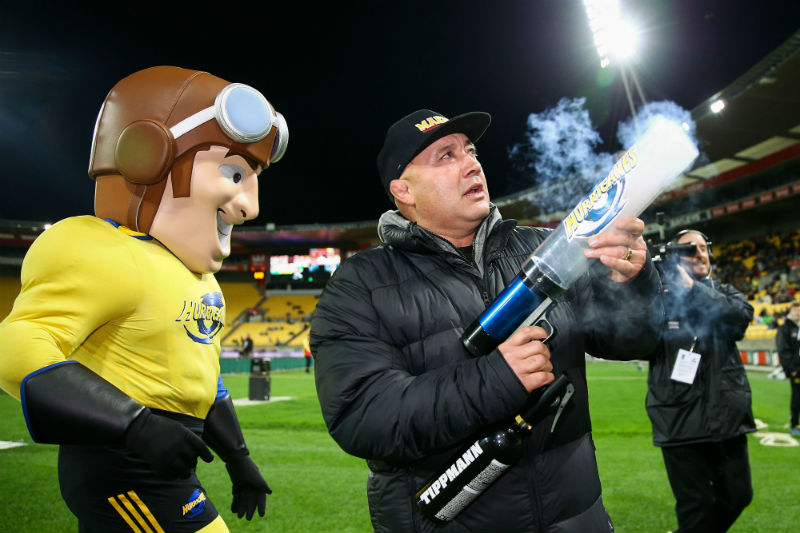 Sailors usually lobbed grenades in this manner, but when they weren’t under direct threat—which was most of the time—they loaded the gun with less-lethal ammunition, like potatoes. When Winston Churchill observed a demonstration and someone forgot the grenades, operators used beer bottles instead.

Without a wartime steam boiler, people still felt a need to launch projectiles. Contemporary “spud launchers” use compressed gas, usually carbon dioxide, that is delivered into an air tank. When the trigger is pulled, the gas is released all at once, and the energy shoots whatever’s in the barrel. That can be a potato, a paintball pellet, or a rolled-up T-shirt.

Derk was intrigued by the concept of the spud launcher and adopted it for clothing. When he began brandishing his T-shirt cannon, other mascots quickly followed suit. Kenn Solomon, also known as Rocky the Mountain Lion—a mascot cheering on the Denver Nuggets—had a friend build him one after seeing Derk’s. Solomon also got involved in selling them commercially. Pretty soon, the device was in heavy use across the NBA, MLB, NFL, and NHL organizations, growing smaller and lighter with each passing year. Once 90 pounds, the cannons now weigh as little as two pounds.

This T-shirt arms race grew to include multi-barrel guns like Big Bella, a 600-pound behemoth which debuted in 2012 at a Philadelphia 76ers game and could fire 100 shirts every 60 seconds. Not to be outdone, the Milwaukee Bucks introduced a triple-barreled gun powerful enough to propel vests and jackets. The Army’s football team built a tiny T-shirt tank. 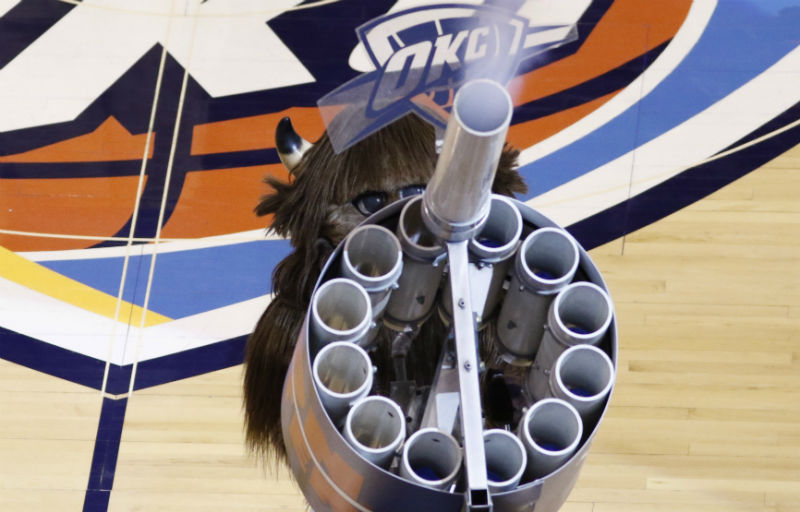 Despite having a relatively innocuous payload, these guns have not always brought joy to attendees. In 2018, a mascot named Chip at the University of Colorado-Boulder suffered an injury when a T-shirt cannon malfunctioned, shooting him in the groin. (The video, of course, went viral.) That same year, a fan named Jennifer Harughty claimed that Orbit, the mascot for the Houston Astros, shot her with a T-shirt and shattered her finger, necessitating surgery. In 2019, Alex Swanson was at Citi Field for a New York Mets game and alleged that a shirt struck him in the eye and knocked him unconscious. Both sued the respective teams.

Derk surely had no idea there would be the occasional mishap, nor could he have predicted someone might misappropriate the gun for other purposes. In 2019, a woman named Kerri Jo Hickman was arrested after being caught while trying to deliver contraband—cell phones, chargers, ear buds, and drugs—by shooting it over the fence of North Folk Correction Center in Sayre, Oklahoma, with a T-shirt cannon.