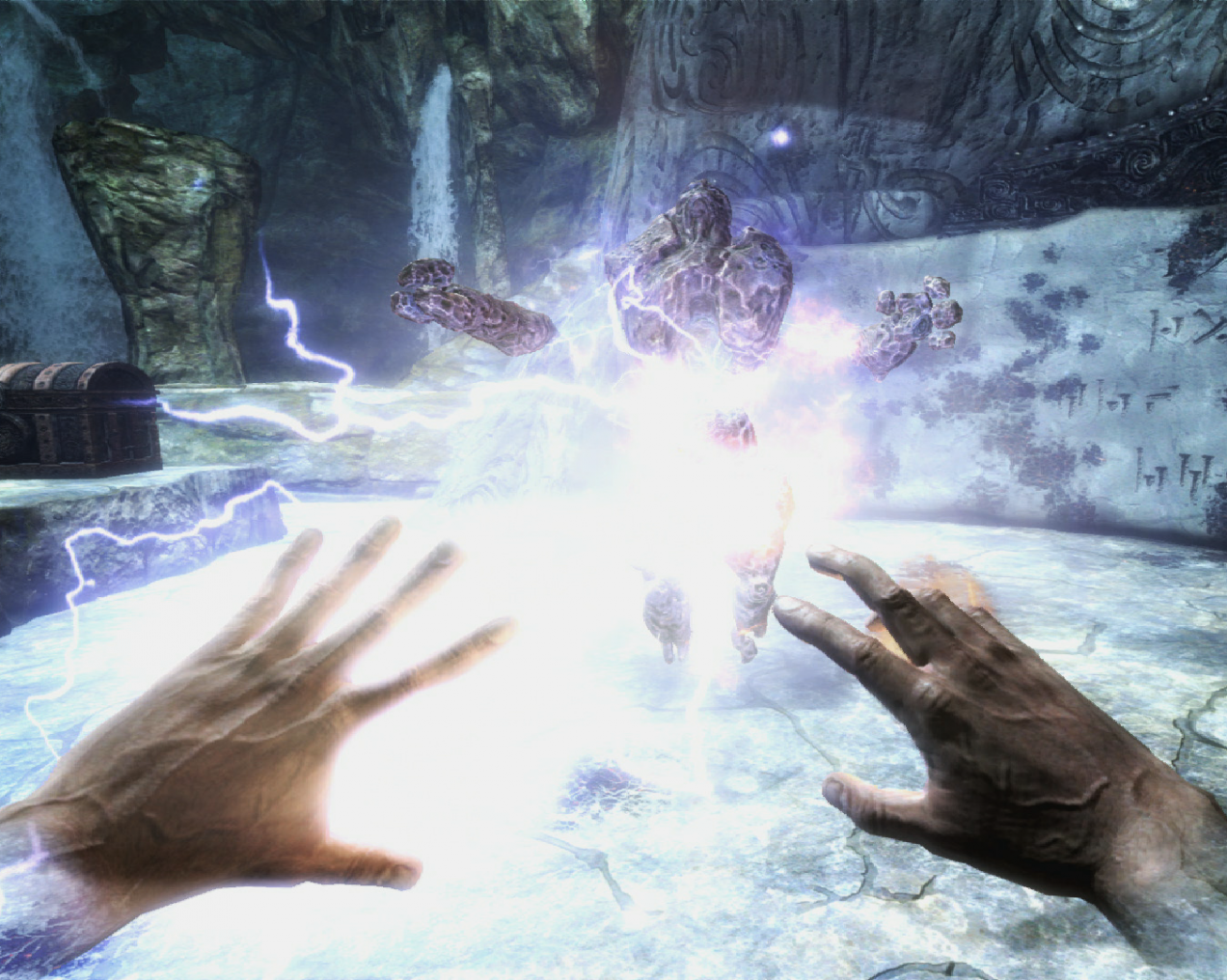 Michael Cook, a 30-year-old senior research fellow at the University of Falmouth, has built an AI capable of imagining new video games from scratch. Cook calls the machine Angelina, a recursive acronym that stands for “A Novel Game-Evolving Labrat I’ve Named Angelina” (a joke that Cook says got old pretty quickly). Since its earliest form, in 2011, it has created hundreds of experimental video games, received acclaim in an international game-making competition, and had its work featured in a New York gallery exhibit.

Game-making algorithms are almost as old as video games, but their use has typically been limited to generating terrain and other simple digital art. The next frontier is using increasingly sophisticated machine-learning techniques to design entirely new kinds of games that have, to date, evaded the human imagination. Although in some domains—such as law, ethics, and health care—ignorance of tradition and precedent is a clear weakness for an AI, in game design it is a strength that could unlock new creativity. Moreover, it could help AI designers lower the cost of making games.

In the early 1980s the text-based adventure game Rogue used pseudo-random dungeon layout generation to create infinite game variations. The intergalactic-trading game Elite generated vast swaths of outer space using nothing but the Fibonacci sequence, squeezing a multiverse into a game that weighed less than an e-mail.

More recently, games have begun to provide more than mere terrain. For the 2011 role-playing game Skyrim, for example, algorithms generated simple but unique quests by randomly configuring places, enemies, and a goal, easing the workload for the game’s quest designers. For 2016’s No Man’s Sky, algorithms enabled a small team of designers to create a game world of unimaginably vast dimensions and fill it with lifelike creatures that nobody, including the designers, had ever seen before (see “No Man’s Sky: A Vast Game Crafted by Algorithms”).

The technique continues to evolve; in November 2017, a team of researchers from the University of Lyon, Purdue, and the video-game publisher Ubisoft published a paper describing how, in the future, game artists may need only to sketch a horizon and let an AI fill in all the geologic detail.

The goal for Angelina is that it will dream up completely new elements of games—a form of computational creativity. On the surface, Angelina works with striking simplicity: Cook presses a button labeled “Play,” and it boots up. The AI then describes a new game in a unique description language that outlines both the game’s rules and its levels. It can make games from images that it pulls from license-free depositories such as Wikimedia Commons, and it can flesh out the premise and rules with characters and ideas lifted from online newspapers or social media (think U.S. presidents or Brexit, for example). This information is written to a text file that can then be run by a stand-alone application, in the same way that a game cartridge is read by a game console.

In its early years, Angelina was limited to developing platform games, in the style of Nintendo’s Super Mario Bros. But in the software’s current iteration, which has been designed for further expansion, its repertoire has expanded to other genres, such as puzzle games and adventures.

“Angelina doesn’t set out to make a game in a particular genre—instead, it tries to build games that match its notion of what a good game is,” says Cook. This notion of quality currently comes from Cook’s own ideas about game design (such as ensuring that the game is not impossible to win or lose, and offering players a number of interesting choices at each step), but in time, he says, the system will learn from the feedback of players, as well as the AI’s experience of playing games made by human designers.

In most cases today, semiautonomous game-making systems are supported by human designers. “There are two types of content in video games: ‘throwaway’ content, such as terrain, common enemies, quests that don’t add to the overall plot that make very little lasting impact on the player, and ‘memorable’ content, such as boss monsters, major plot points,” says Mark Riedl, a 42-year-old associate professor at Georgia Tech. “While the automated creation of ‘throwaway’ content has been used for decades using simple rule-based algorithms, generating ‘memorable’ content is a human-level AI problem.”

Despite the challenges, it’s an area that could, Cook believes, reap major rewards in unlocking new game concepts and mechanics. Recently, he fed Angelina a game outline about exploring a dungeon as an adventurer. Instead of designing basic levels for an adventure game, Angelina designed levels in which a player controls multiple adventurers simultaneously and must get some of them killed in order to rescue the remainder. “It frequently does things like this—looking beyond the assumptions I have, and finding interesting things I would not think to look for,” says Cook.

In the short term, Angelina’s experimentation could prompt human designers on commercial projects. “The AI can explore a space, identify things that are potentially interesting, and then present them to a designer to follow up on,” says Cook. “So your level designer receives a weekly digest of 10 level ideas every week. They’re unpolished, but they present a particular idea that might be developed into something bigger.”

Riedl is also interested in the way in which automated systems can blend ideas from disparate video games to create new ideas and even genres. It’s a technique used by designers at professional studios. At Sony Computer Entertainment in London, for example, one design team would label slips of paper with game concepts, place them into two hats, and use the random combinations generated to brainstorm new ideas. Reidl’s system takes platform-game levels based on early Super Mario Bros stages and blends them with other ideas. “One of the bigger challenges is for an AI system to figure out when it has made a good blend,” he says. “The algorithm must measure the novelty of what it is generating, how surprised a player is likely to be by the creation, and some game-specific attributes such as playability and conformance to universals about good game design.”

One of the major challenges is in specifying how the system decides when a game is “finished.” The more interesting things Angelina discovers through its experimentation, the more effort it continues to put into a project. “I’ll also be exploring the use of human play testers,” Reidl says.

The value of human criticism was made clear in 2013, when Cook entered one of Angelina’s games into the Ludum Dare competition, a game jam that runs three times a year and attracts thousands of entrants, both amateur and professional. As the first AI to enter a game jam, Angelina’s creation, To That Sect, was played tens of thousands of times and was later exhibited at a gallery event in New York. “Game designers played its game and gave feedback, and we learned a lot from reading and analyzing how they responded to the system,” Cook says.

Julian Togelius, an associate professor at New York University’s Tandon School of Engineering, has pioneered the work on evolutionary algorithms for generating game content. Togelius is less interested in creating commercial games than inventing new kinds of games to test artificial intelligence. Current benchmarks, which are used across AI testing in fields as remote as military mine-sweeping, are based on an emulation of the Atari 2600 console, whose games are well known. “This leads to overspecialization to particular games,” says Togelius. “To test general intelligence, we must rely on unknown games, and for this we need a way of creating new games automatically.” There is even a competition to create an AI able to excel at any kind of game it attempts, rather than being a one-trick pony like Deep Blue, which mastered chess but did not understand checkers.

Both Cook and Togelius believe that although automated game designers and players could fundamentally alter the ways big-budget games are made, the future for human game designers is one of collaboration rather than obsolescence. “For the foreseeable future, the best game generation will always be by humans in collaboration with algorithms,” says Togelius.

For Cook, it’s a question of the human ego as much as anything. “I imagine we’ll discover that while we’re happy to share credit for some things, we prefer to always be in control of other aspects of the creative process,” he says.

Simon Parkin is an award-winning writer, journalist, and broadcaster from England. He has contributed to the New Yorker, the Guardian, the Daily Telegraph, Edge magazine, and many others.