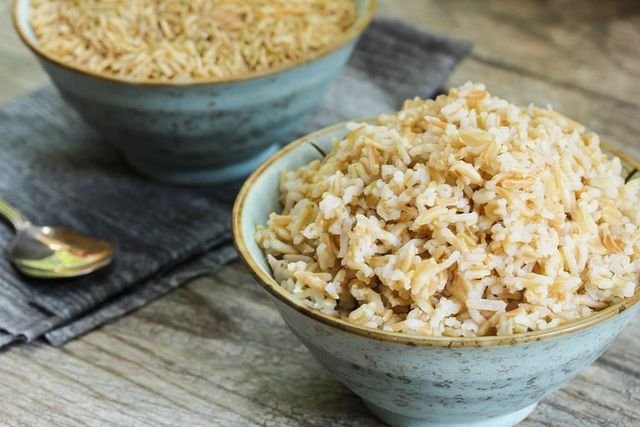 Rice is a staple food in diets all around the world. Whether you’re enjoying it in a poke bowl or in a creamy chicken and rice casserole, this carbohydrate is extremely versatile and can be incorporated in dishes ranging from breakfast items to even sweet desserts (rice pudding anyone?!).

While many of us are familiar with white and brown rice, there are actually a ton of other rice varieties that can be far more nutritious and flavorsome.

Here’s everything you need to know about some of our favorite healthy rice picks.

Brown rice is considered a whole grain since it contains all three parts of the grain kernel which include the bran, germ, and endosperm. The only thing that is removed in brown rice is the outer inedible hull.

But is brown rice much healthier than white rice? In contrast, white rice has the outer layers and grain kernel removed, thus reducing a significant amount of vitamins and minerals. Because of this, many companies will fortify white rice to add back some nutrition.

Brown rice is slightly higher in fiber than white rice, but the real difference is that brown rice has a significantly lower glycemic index than white rice. It's a simple swap for white rice in practically any recipe or food ranging from sushi to rice pilaf. There is also brown basmati rice which is a long needle shaped grain similar to white basmati rice, but again keeps the germ and bran intact.

Also known as purple or forbidden rice, this rice gets its dark color from an antioxidant pigment known as anthocyanin which is also found in foods like eggplants and blackberries. Black rice is often referred to as forbidden rice as it used to be reserved for emperors and aristocracy in Ancient China.

This rice variety is abundant in antioxidants and vitamin E and has a slightly nutty flavor, making it a favorite in the GH Nutrition Lab. It also has slightly more fiber and nearly double the amount of protein of brown rice.

This nutty-flavored rice also contains anthocyanins, which means you are getting a dose of antioxidants by picking this choice. It’s an excellent option for stir-fries and curries since it remains separate when cooked.

Red rice is often mixed in with brown rice in certain blends like tri-color or volcano rice since its nutty flavor complements the notes in brown rice very well. It also has about 1mg of iron which is 6% of the daily value and 109mg potassium.

This short grain rice is infused with bamboo extract and has a jade-green color. The bamboo extract provides a bit of antioxidants, and this variety of rice is also high in manganese and has a decent amount of protein. It has a fluffy yet somewhat sticky texture and a both nutty and slightly vanilla taste.

Using jade pearl rice in dishes like sushi or poke bowls adds an unexpected but beautiful visual addition to any plate. It's also commonly used in puddings and rice salads.

Don’t be fooled by the name; wild rice is actually far from rice. This is actually a semi-aquatic grass typically grown in lakes, marshes, tidal rivers and bays. Interestingly, wild rice also has slightly higher protein content than other rices and whole grains, and it's also a good source of several vitamins and minerals.

Research in the 90s found that wild rice is extremely high in antioxidants, and further research in 2009 showed that wild rice had 30 times greater antioxidant activity than white rice. Given its earthy flavor and chewy texture, it's commonly used in pilafs and paired with mushrooms.

What about Rice and Arsenic?

Arsenic is found in two forms, organic and inorganic, and is a naturally occurring element found in water and soil according to the National Institute of Environmental Health Sciences. Arsenic is a known human carcinogen and can be harmful when consumed in excessive amounts. This is why arsenic in drinking water is a problem for several countries. Additionally, varying levels of arsenic can be found in foods like rice and some fish.

If you are eating rice every day in significant amounts, the arsenic content may pose a health risk. You can reduce the arsenic content in rice by washing it first and then cooking it with clean water that is low in arsenic. As long as you are eating rice in moderation (no more than a few times a week) and washing it before cooking, it should be perfectly safe to consume. Plus, these rice varieties listed above are all abundant in nutrients, vitamins and minerals that are beneficial for your health.

If rice happens to be a large part of your diet, consider swapping it out a few times a week with other whole grains like quinoa or even cauliflower rice.