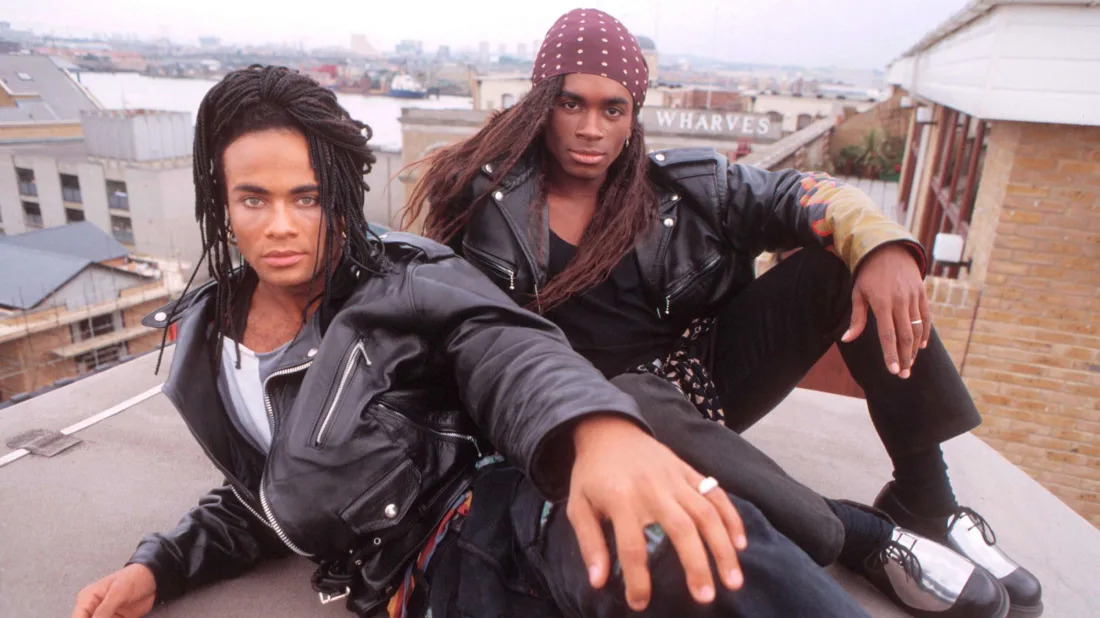 Pop music has always been part talent show, part magic trick. This has never been more apparent than it was on November 15, 1990, when German producer Frank Farian revealed in a press conference that then-superstars Rob Pilatus and Fab Morvan, members of the pop duo Milli Vanilli, hadn’t sung a note on Girl You Know It's True, their 1989 multi-platinum debut album.

Milli Vanilli truthers had long speculated that Rob and Fab, two guys with thick European accents and limited command of the English language, couldn’t possibly have crooned hits like “Girl You Know It’s True” and “Blame It On the Rain.” And yet the news came as a shock to many. Milli Vanilli instantly went from Top of the Pops to laughing stocks. Rob and Fab were stripped of the Grammys they had won for Best New Artist, and duped fans filed class-action lawsuits.

It was one of the biggest scandals in music history, though it wasn’t an isolated incident. Around the same time, dance-pop groups Black Box and C+C Music Factory got caught doing almost exactly the same thing.

“We sold our souls to the devil,” Pilatus told the Los Angeles Times just days after Farian’s bombshell. “We lied to our families and our friends. We let down our fans. We realize exactly what we did to achieve our success. We made some very big mistakes and we apologize.”

The devil, in Rob and Fab’s version of the story, was Farian, a genius musician and marketer who’d pulled similar stunts before. In the 1970s, Farian struck gold with Boney M., a German disco group seemingly fronted by four Caribbean singers. In reality, Farian himself had provided the vocals on the group’s first album. He knew the importance of image better than anyone, and when he met Rob and Fab in early 1988, he immediately saw an opportunity.

Young, attractive, and hungry for success, the aspiring pop stars were easy marks. Rob, the son of a black American soldier and white German woman, was born in New York City but spent the first several years of his life in a Bavarian orphanage. He was adopted when he was 4 years old. Growing up in Munich, he grappled with racism and feelings of isolation. It was only through music and breakdancing that he found his identity. When he met Fab—who had been raised in Paris by parents from the Caribbean island of Guadeloupe—he found someone with similar interests and life experiences. 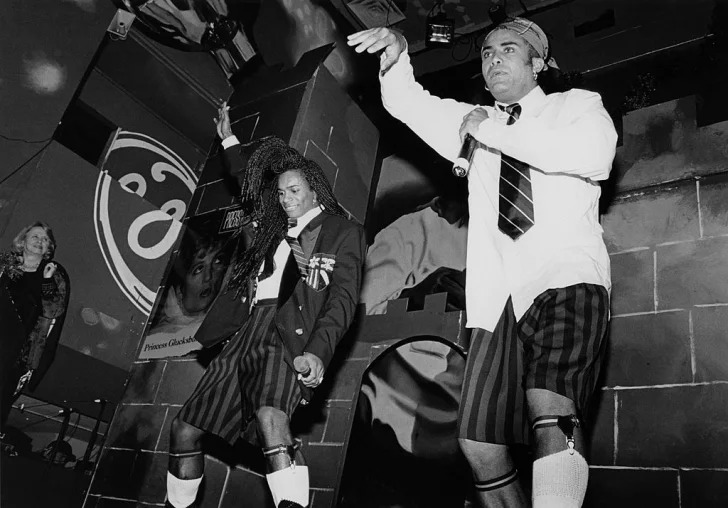 “Something clicked between us,” Rob told the Los Angeles Times in July 1989, when Milli Vanilli’s star was still on the rise. “Maybe it’s because we’re both black people who grew up in foreign cities that don’t have too many blacks."

In the early days of their friendship, Rob and Fab were regular faces on the Munich club scene. They dabbled in dancing and modeling, but what they really wanted to do, Rob said in a 2017 interview with VLADTV, was make music. They began hanging out with local studio musicians in Farian’s orbit and played a few club shows. Soon, Farian himself took notice.

What happened next is the most crucial and contested part of the story. Farian invited Rob and Fab to his studio and signed the duo to a record deal. That much is known. The question is whether Rob and Fab knew what they were getting into.

“We walked into a trap, not knowing it was a trap,” Fab told VLADTV. In his version of events, he and Rob signed the contract without realizing they were being hired purely to lip-sync. They wanted to sing, and the first time Farian played them “Girl You Know It’s True”—the song that would become their international breakthrough—he presented the track as an instrumental. Little did they know Farian had already recorded vocals with professional singers.

By the time they learned the truth, Fab said, they had already spent Farian’s advance money on new clothes and their trademark hair extensions. They were suddenly in debt to Farian, and they couldn’t walk away from the project until they paid him back. Once the group took off, and girls and drugs and money came into the picture, it became even harder for Rob and Fab to break away.

Farian claimed that Rob and Fab were never going to be proper recording artists. “I’ve never heard such a bad singer,” Farian said of Rob in a Los Angeles Times interview “They wanted to sing. They wanted to write songs. It never happened. They went instead to discos 'til 4 a.m. and slept all day. All they ever really did was party. Someone who lives like that can’t make good music.”

For all his showbiz acumen, Farian had no idea how big the whole thing was going to get. “It was a crazy idea,” he told the Los Angeles Times. “I thought, OK, it’s just for discotheques and clubs.” But his mix of pop, R&B, and hip-hop was perfectly pegged for the times, and Milli Vanilli quickly became the music industry's equivalent of Frankenstein monster.

“Girl You Know It’s True” went to No.1 in Germany and earned the group a deal with Arista Records in the United States. Thanks in large part to their music videos, which featured the photogenic pantomimers rocking cool clothes and swinging those signature braids, Milli Vanilli scored five Top 5 hits on the Billboard Hot 100. That included three No.1 singles: “Baby Don’t Forget My Number,” “Girl I’m Gonna Miss You,” and “Blame It on the Rain.” All four singles were on the album Girl You Know It’s True, which went six-times platinum in America and sold millions more copies worldwide.

As they enjoyed the trappings of fame, Rob and Fab struggled to live with their secret. On July 21, 1989, the group’s backing tape malfunctioned during a Club MTV tour stop in Bristol, Connecticut. As the words “Girl, you know it’s ...” repeated over and over, Rob panicked and ran offstage. The incident had no immediate effect on their career, but Rob would later call the mishap “the beginning of the end.”

Figuring their time was running out, Rob and Fab turned against Farian and demanded to sing on their next album. As the battle intensified, Farian had no choice but to call a press conference and spill the beans. He was unapologetic about the scam, and in 1991, he released The Moment of Truth, a new studio album credited to The Real Milli Vanilli, i.e. the singers from the first album. Arista, meanwhile, claimed no prior knowledge of the deception, though Rob and Fab insisted the label knew exactly what was going on.

Days after Farian’s press conference, Rob and Fab called their own. They were joined by a voice coach who assured the audience that, yes, they could sing. Rob and Fab then gave back their Grammys, which they’d planned on doing even before the Recording Academy formally revoked the awards.

The fallout was devastating for Rob and Fab. They released a self-titled comeback album in 1993 and even appeared on The Arsenio Hall Show to sing for real in front of a national audience. But Rob & Fab flopped, and the two former idols wrestled with drug addiction. Fab ultimately sobered up, but Rob spiraled out of control. In 1996 he served jail time for assaulting two people and breaking into a car, and in 1998, he died of a drug overdose in a Frankfurt hotel room. He was 33 years old.

At the time of his death, Rob had apparently been working with Farian again. "I'm totally shocked," the producer told the Independent upon learning of Rob’s death. "Rob looked really good again. He was full of optimism for the future. We intended to tape material for another album.”

Fab wasn’t involved in that project, but he has revisited Milli Vanilli’s past in his own way. In yet another bizarre twist to this story, Fab teamed up with John Davis, one of the real singers whose voice he’d once lip-synced to, for the project Face Meets Voice: A Milli Vanilli Experience. The emergence of that unlikely duo might make for a good ending to the Milli Vanilli movie that’s been in the works since 2007. Filming was all set to begin on the project when director Brett Ratner lost his co-financing deal with Warner Bros. amid allegations of sexual misconduct.

Back in their heyday, Milli Vanilli claimed the band’s name meant “positive energy” in Turkish. That wasn’t true: The moniker was partially inspired by the English pop group Scritti Politti. But Fab has maintained a remarkably upbeat attitude as he’s gotten older. In addition to making music, he’s branched off into motivational speaking, using his story as an example of how one can “not just survive but thrive” after adversity. He’s certainly made peace with his own legacy. Speaking with the Associated Press in 2018, he defended his and Rob’s contributions to pop culture some two decades earlier.

“People might say, ‘Well, you know, they didn’t sing on the record,’” Fab said. “But look at the rest. We were the heart and soul of Milli Vanilli. We did those 107 cities (on tour) ... in eight months. We worked hard. We worked our butts off. We entertained people.”

Kenneth Partridge is a music and pop-culture writer based in Brooklyn. He's written for such publications as Billboard, The AV Club, Pitchfork, and Refinery29. His hobbies include reading, running, shopping for records, and attempting to justify his love of ska.