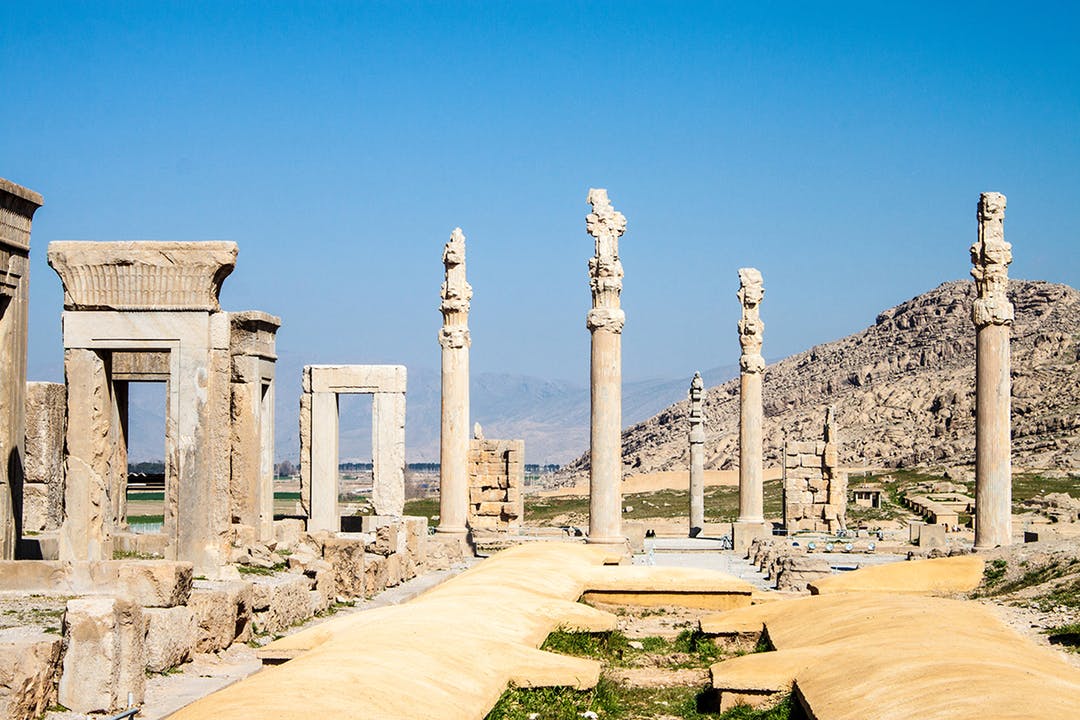 The carvings and palace of Persepolis were rediscovered in the 20th century. Photo by Matyas Rehak/Shutterstock.

When the lost city of Kweneng, South Africa, was discovered last year, it wasn’t because someone found a fossil there or excavated it with a shovel. Instead, archaeologist Karim Sadr relied on LiDAR technology, which uses lasers to measure distance, to create detailed images of the surrounding Suikerbosrand hills, where Tswana-speaking people first built stone settlements in the 15th century.

It was a slow process that spanned more than two years, sort of a digital version of clearing vines from a hidden temple. Sadr pored over the data looking for patterns beneath the area’s thick brush. Rounded shapes emerged on the black-and-white LiDAR images, helping to reconstruct the lives of families who lived in the stone homesteads, herded cattle, and created ash heaps (typically the remainders of feasts) to flaunt their wealth. While scientists had long believed that the hills held a series of small, lost-to-time communities, Sadr’s finds extended far beyond the aboveground ruins already visible on the site. “There was no real ‘eureka’ moment,” said Sadr, “but it seems that one day I was looking at a collection of villages and the next day I saw a city.”

Cities such as Kweneng are forgotten for a variety of reasons, and their remains have always exerted a powerful draw on inquisitive travelers. While Kweneng’s visitor infrastructure isn’t quite as developed yet, there are plenty of other rediscovered cities to visit. Whether you’re among the dusty palaces at Xanadu or walking along ancient Troy’s battlements, you can channel your inner explorer while visiting these ruins, whose cultural breadth and evocativeness show how enduring lost cities can be.

Achaemenid Empire kings fortified a natural stone terrace into an imposing platform when they founded Persepolis in the 6th century B.C.E., leveraging the landscape to awe-inspiring effect and military advantage. After centuries in the sand, the delicate carvings, inscriptions, and palaces of Persepolis were excavated in the 20th century. Apadana Palace dominates the oldest part of the site, where travelers will see 13 of the original 72 towering stone columns—the only survivors of a 331 B.C.E. attack by Alexander the Great. If you travel to Iran, we recommend booking through a tour operator like Intrepid, which can help facilitate visas. The architectural wonder of Petra is one of Jordan’s main attractions. Photo by Yongyut/Shutterstock.

The entrance to Petra is designed for maximum impact, leading visitors from a shadowy gorge to views of soaring, tangerine-colored rock. Inhabited since prehistoric times, Petra was carved by Nabateans (who likely established it as the capital city in the 4th century B.C.E.) and is Jordan’s star attraction. It’s still easy enough to find solitude in the now-uninhabited desert site. Ditch the tour groups by climbing a steep pathway to the High Place of Sacrifice; its pair of monumental obelisks are believed to represent Nabatean gods.

Founded in the 9th century, this forest city developed a unique architectural plan of stone pathways, plazas, and houses over centuries, but dense jungle swallowed them shortly after the arrival of Europeans. The five-day trek to Ciudad Perdida (the only way to get there) is an adventure in and of itself. Brave the steep, muddy trail to reach ceremonial terraces and to meet Colombia’s indigenous Kogi and Wiwa people, who are some of the site’s modern-day guardians and live in the region. Billowing ash from Mount Vesuvius dimmed the sky above Pompeii and Herculaneum in 79 C.E., then buried the cities for nearly 17 centuries. While history this ancient often requires leaps of imagination, the tragic past remains eerily vivid here. Take a transporting walk through the cities, which are about a 20-minute drive apart, to see brilliant frescoes, visit the site of an ancient brothel, see the petrified bodies, and pay your respects in the Temple of Apollo. The Palace of the Minoans in Knossos. Photo by Constantinos Iliopoulos/Shutterstock.

The Minoan palace at Knossos was already ancient when Homer wrote his Odyssey, and it has myth and history layered into its Bronze Age foundations. Archaeologist Arthur Evans began excavations of the site on Crete in 1900; he linked his findings of the remains of the palace to the mythological labyrinth where the minotaur—a half-man, half-bull born to a Cretan queen—lurked in darkness. While that story remains unproven, travelers can judge the creature’s legendary origins for themselves when visiting the palace’s east wing, which is adorned with a fresco that depicts three figures and a giant vaulting bull. The Caana complex is the tallest structure in Belize. Photo by PRLLL/Shutterstock.

Trees curl around Caracol’s stone pyramids, which the Belize jungle overtook after residents abandoned the site in the 11th century. Its architectural achievements are impressive even by modern standards: Caana, the temple complex at the heart of Caracol, remains the tallest structure in the country at 141 feet, and archaeologists believe the Maya metropolis would have dwarfed the area of today’s Belize City. Rediscovered in 1938, Caracol draws far fewer visitors than nearby Tikal—plan an early-morning visit and you might have it to yourself. The remnant fortifications of Machu Picchu were found in 1911. Photo by Cezary Wojikowski/Shutterstock.

Carved high in the Andes, Machu Picchu was a fitting sanctuary for the Inca, who honored the turbulent gods of the mountains. Emptied by the fall of the Inca Empire in the 16th century, the gorgeous synthesis of peaks and fortifications have drawn adventurers to Peru since the citadel was rediscovered in 1911. Journey to Machu Picchu by footpath, bus, or luxury train, then trek to the neighboring peak of Huayna Picchu for classic views across the main site. An archaeologist used Homer’s “Iliad” to find Troy in 1870. Photo by Lillac/Shutterstock.

A dramatic setting for the ancient world’s most consequential love triangle, Troy has a 4,000-year history that merges with myth near Turkey’s Aegean coast. Discovering Troy was a driving passion for Heinrich Schliemann, an archaeologist who used Homer’s Iliad like a treasure map and found the site in 1870. After you walk through the ancient fortifications and palaces here, see the troves they once held in the Troy Museum, which opened in October with interactive exhibits highlighting gleaming jewelry, marble statues, and other treasures. Ubar was untouched in the middle of the Arabian peninsula for nearly 1,000 years. Photo by Damian Ryszawy/Shutterstock.

As camels laden with frankincense crossed the Empty Quarter of the Arabian peninsula, travelers gathered for dates and gossip at trading posts deep in the desert. Lost to the blowing sand for nearly 1,000 years, Ubar is one such site; it was found in 1992 using images taken from space. Located on the southernmost edge of Oman, Ubar is two hours inland from the Arabian Sea city of Salalah. Make the trip to see stone walls and fortifications that are rising from the dusty ground as excavations proceed. Xanadu is surrounded by grasslands in every direction. Photo by beibaoke/Shutterstock.

Kublai Khan ruled his empire from the city of Xanadu, surrounded by a grassland steppe that stretched to the horizon in every direction. Located about five hours northwest of Beijing, this is where Mongolian and Han cultures mingled, and travelers debated philosophy in gracious palaces and gardens. Find the remains of that cosmopolitan capital in Xanadu’s excavated temples, stone walls, and tombs, which were abandoned to the windy plains in the 15th century. The La Danta pyramid towers above the Guatemalan forests. Photo by Dennis Jarvis.

Only an adventurous few will reach the ancient Maya city of El Mirador, which dates back to 1,000 B.C.E. and is shrouded by the largest tropical forest north of the Amazon. There are only two ways to get here: Charter a helicopter or trek two days from the road’s end at the village of Carmelita. Make the journey to El Mirador to climb La Danta, a towering pyramid whose crest swells above the surrounding canopy.