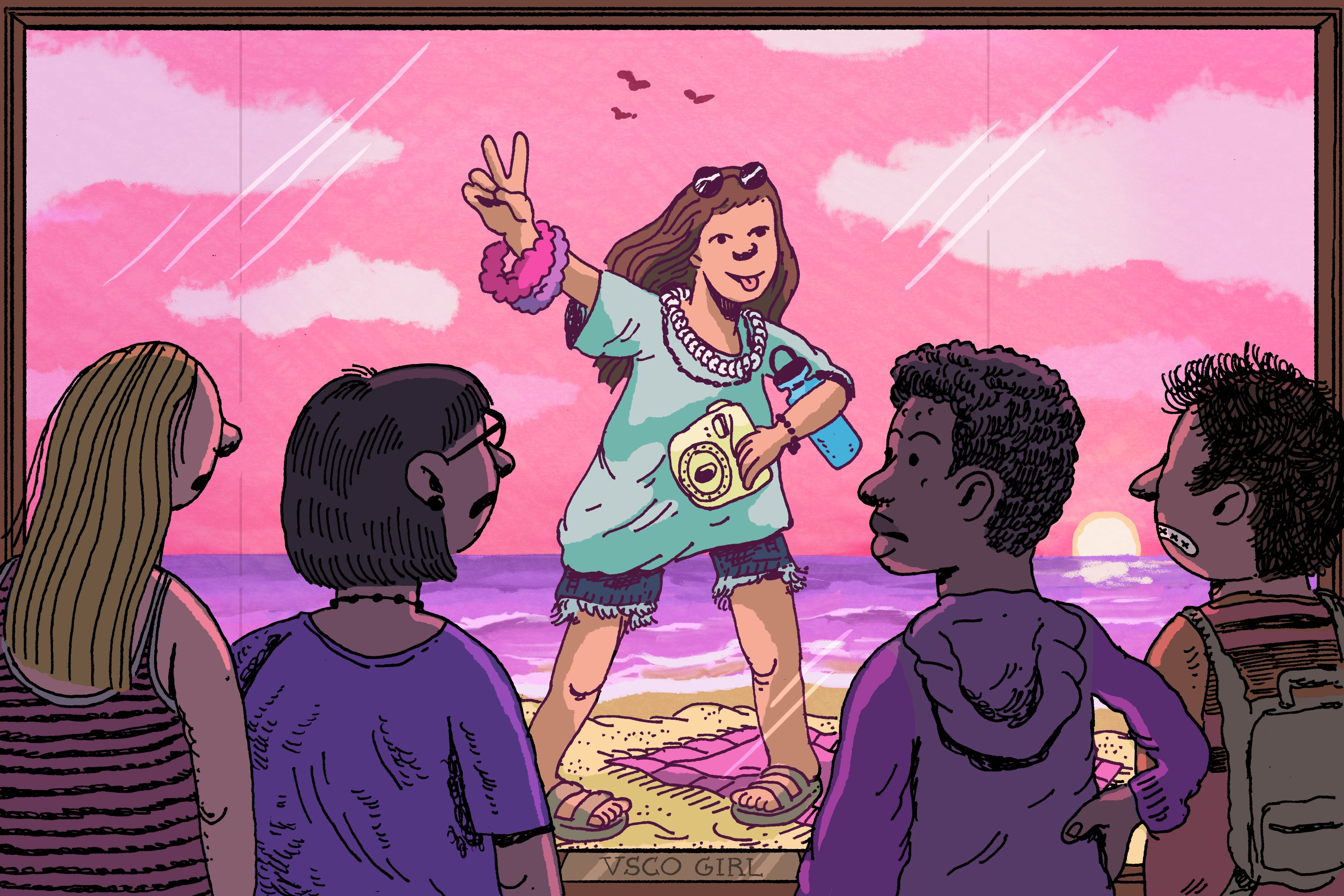 Teens are harsh spectators of the VSCO girl. Illustration by Franco Zacharzewski.

A lot can happen in one teenage summer. Everyone’s familiar with the growth spurt that takes a proverbial kid from pipsqueak to young adult. And now we know that summer is also enough time for an entirely new teen archetype to emerge.

In the 2018 school year, there was no such thing as a VSCO girl (pronounced “visco”). Maybe they existed, but they weren’t called VSCO girls yet? In any case, in the 2019 school year, they’re all anyone can talk about, teens and internet trend piece writers alike: The VSCO girl, named after VSCO, an Instagram-like app for photo editing and sharing, wears oversize name-brand shirts, wrist scrunchies, and puka shell necklaces, shows her concern for the environment by carrying around a metal straw and Hydro Flask water bottle, and likes to say “sksksksk” (aka the letters that indicate a keyboard smash) out loud, among other highly specific characteristics. And she is very, very real.

As much as adults are confused about and fascinated by VSCO girls, a new tribe of adolescent female—and we are—I think teenagers might be, too. I say this after conferring with a bunch of in-the-know young sources. I hereby present my findings.

First off, teenagers recognize that it’s weird that this thing they all first saw on TikTok, where the VSCO girl gestated, has manifested so clearly in their high school hallways. “It seems like it’s something that only exists on the internet, but there’s a decent amount of them that I’ve actually seen in real life,” said Julia, another 15-year-old. “Usually, we point them out to each other when we see them, and we might laugh at them a little bit, just because they’re so conformist. Their entire wardrobe is oversize T-shirts and Nike shorts.” (The T-shirts are meant to cover the shorts: “You can never see their pants for some reason,” Kelly said.)

The trend is more visible, teenagers say, than others TikTok had a hand in popularizing. “At school, you actually see VSCO girls, but you don’t see e-boys or anything like that,” Emely, also 15, told me, referring to another subculture born on TikTok populated by an updated, neon-haired version of what might have been called a “scene” or “emo” kid 15 years ago. “No one really dressed like that in real life. It was just on the app,” said Tori, a 16-year-old, of e-boys and e-girls. “I definitely think this one was more real.”

The trend may be real now, but it almost seems like the parodies of VSCO girls on TikTok and YouTube came before the girls themselves. (This is why I half-expect to find out in a few months that the VSCO girl thing was all a viral marketing stunt.) “Before, the popular basic girls were dressing a different way,” a 15-year-old named Cassandra told me. “I think over the summer they definitely added specific things, like the necklaces, like the scrunchies, like the oversize shirts.” Tori added, “They dressed similar to that. But once it was a big trend on TikTok, a lot of girls started dressing more similar to VSCO girls.” It may be, then, that the term VSCO girl delineated and codified a trend already on its way.

As for the name coming from the VSCO app, most of the teenagers I consulted shrugged and suggested adults not dwell on it. A lot of VSCO girls reportedly don’t even use the app. “VSCO is an app where you can edit photos and all that, and I honestly don’t see the connection. That’s just what they’re called,” Emely said.

Though teenagers agree on what the VSCO girl wears, their answers about who she is vary. For some, she’s the new incarnation of the cool girl: “They’re usually skinny, white, wealthy girls, and really popular,” Kelly said. (All that accoutre-VSCO they wear? “The stuff costs a lot of money,” she added.) Julia, who attends public school, tended to associate them with private schools. Does that make them bad-girl-popular or honor-roll-popular, though? “They’re usually the kind of girls that would make fun of you in elementary and middle school,” Kelly said. And some of them are just wannabes: “The popular girls are the VSCO girls, but there’s also ones that aren’t as popular,” said Lauren, another 15-year-old. “They have all the mainstream interests, like mainstream music interests.”

For Julia, “The VSCO girl is kind of the right-now version of preppy. It’s kind of preppy with a beachy twist. They do dress like normal teenagers, but they just have certain characteristics that are very typical VSCO girl.”

This all taps into another quality frequently attributed to VSCO girls that, in 2019, might challenge their association with coolness: that common female-on-female slur, basic bitch. “They all kind of dress the same and don’t really have a personality in my opinion,” Lauren said. Kelly agreed: “They all use the same jokes over and over, and the same memes that have been recycled over and over. It gets old and stale. They’re just kind of basic and not that interesting as people.” Cassandra added: “I don’t think they have much personality to them or sense of humor.” Tori said: “They’re like all the same person, honestly.”

Emely went a step further and surmised that VSCO girls are so basic that they tend to be newbie high-schoolers: “VSCO girls are primarily thought to be freshmen, class of 2023,” she said. Obviously, not all of these things can be true at the same time. The VSCO girl may be … whoever you need her to be. And one person you don’t want her to be is you.

For the teens I talked to, most said being called a VSCO girl was a bad thing, something to be avoided. They were mixed on whether anyone would own up to being one or proudly proclaim her VSCO girl status, or any strong connection with it, to the world.

“None of my friends are full VSCO girls,” Julia said. Then she added, “I think a lot of them have many of the tendencies that a VSCO girl would have—they dress a lot like them—but from what I’ve seen, VSCO girls are usually white, and they usually go to private schools. Some of my friends are definitely bordering VSCO girls.” Sounds like a conflicted soul if I ever heard one.

Other girls ’fessed up to changing how they dress and talk so as to avoid VSCO-ssiation. Emely said she now abstains from wearing scrunchies to school. She also used to like saying “sksksksk” and “And I oop.” Not anymore. “Even when random girls at school say it, everyone’s like, ‘Oh my God, it’s a VSCO girl,’ so I couldn’t say it,” she said. Cassandra, meanwhile, has given up on a wardrobe staple: “I’ve been wearing oversized shirts since seventh grade, but I stopped recently, because of the VSCO girls. I don’t want to be associated with them,” she said.

After all this hype, is the VSCO girl here to stay? According to Lauren, “I feel like it’ll last a while, because it’s kind of like it’s always been there, but now they finally have a name to themselves. So I feel like it’s gonna stick around.” How can they last through the winter, though, I wondered, when shorts under oversize T-shirts are such a crucial part of their aesthetic? The shorts are everything. What will they wear? “Probably black leggings,” Lauren offered. Long live VSCO, I guess.