These three objects illustrate the principles behind “spin,” a property of fundamental particles. A domino needs a full turn to get back to the same place. A two of clubs needs only a half turn. And the hour hand on a clock must spin around twice before it tells the same time again. Credit: Lucy Reading-Ikkanda / Quanta Magazine.

Compared to the unsolved mysteries of the universe, far less gets said about one of the most profound facts to have crystallized in physics over the past half-century: To an astonishing degree, nature is the way it is because it couldn’t be any different. “There’s just no freedom in the laws of physics that we have,” said Daniel Baumann, a theoretical physicist at the University of Amsterdam.

Since the 1960s, and increasingly in the past decade, physicists like Baumann have used a technique known as the “bootstrap” to infer what the laws of nature must be. This approach assumes that the laws essentially dictate one another through their mutual consistency — that nature “pulls itself up by its own bootstraps.” The idea turns out to explain a huge amount about the universe.

When bootstrapping, physicists determine how elementary particles with different amounts of “spin,” or intrinsic angular momentum, can consistently behave. In doing this, they rediscover the basic form of the known forces that shape the universe. Most striking is the case of a particle with two units of spin: As the Nobel Prize winner Steven Weinberg showed in 1964, the existence of a spin-2 particle leads inevitably to general relativity — Albert Einstein’s theory of gravity. Einstein arrived at general relativity through abstract thoughts about falling elevators and warped space and time, but the theory also follows directly from the mathematically consistent behavior of a fundamental particle.

“I find this inevitability of gravity [and other forces] to be one of the deepest and most inspiring facts about nature,” said Laurentiu Rodina, a theoretical physicist at the Institute of Theoretical Physics at CEA Saclay who helped to modernize and generalize Weinberg’s proof in 2014. “Namely, that nature is above all self-consistent.”

A particle’s spin reflects its underlying symmetries, or the ways it can be transformed that leave it unchanged. A spin-1 particle, for instance, returns to the same state after being rotated by one full turn. A spin-$latex \frac{1}{2}$ particle must complete two full rotations to come back to the same state, while a spin-2 particle looks identical after just half a turn. Elementary particles can only carry 0, $latex \frac{1}{2}$, 1, $latex \frac{3}{2}$ or 2 units of spin.

To figure out what behavior is possible for particles of a given spin, bootstrappers consider simple particle interactions, such as two particles annihilating and yielding a third. The particles’ spins place constraints on these interactions. An interaction of spin-2 particles, for instance, must stay the same when all participating particles are rotated by 180 degrees, since they’re symmetric under such a half-turn.

Interactions must obey a few other basic rules: Momentum must be conserved; the interactions must respect locality, which dictates that particles scatter by meeting in space and time; and the probabilities of all possible outcomes must add up to 1, a principle known as unitarity. These consistency conditions translate into algebraic equations that the particle interactions must satisfy. If the equation corresponding to a particular interaction has solutions, then these solutions tend to be realized in nature.

For example, consider the case of the photon, the massless spin-1 particle of light and electromagnetism. For such a particle, the equation describing four-particle interactions — where two particles go in and two come out, perhaps after colliding and scattering — has no viable solutions. Thus, photons don’t interact in this way. “This is why light waves don’t scatter off each other and we can see over macroscopic distances,” Baumann explained. The photon can participate in interactions involving other types of particles, however, such as spin-$latex \frac{1}{2}$ electrons. These constraints on the photon’s interactions lead to Maxwell’s equations, the 154-year-old theory of electromagnetism. 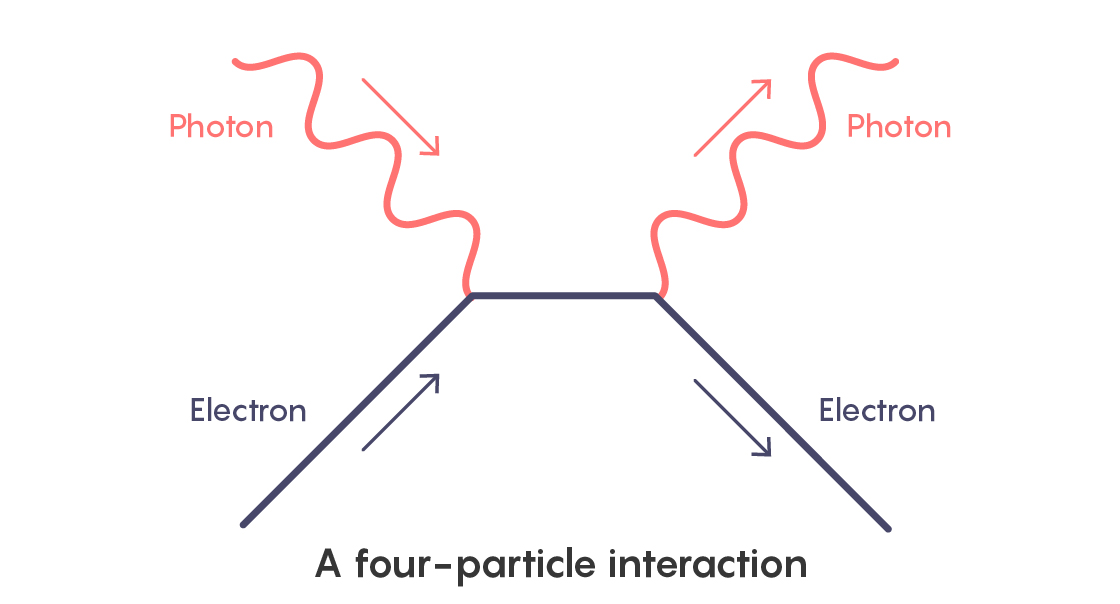 Or take gluons, particles that convey the strong force that binds atomic nuclei together. Gluons are also massless spin-1 particles, but they represent the case where there are multiple types of the same massless spin-1 particle. Unlike the photon, gluons can satisfy the four-particle interaction equation, meaning that they self-interact. Constraints on these gluon self-interactions match the description given by quantum chromodynamics, the theory of the strong force.

A third scenario involves spin-1 particles that have mass. Mass came about when a symmetry broke during the universe’s birth: A constant — the value of the omnipresent Higgs field — spontaneously shifted from zero to a positive number, imbuing many particles with mass. The breaking of the Higgs symmetry created massive spin-1 particles called W and Z bosons, the carriers of the weak force that’s responsible for radioactive decay.

Then “for spin-2, a miracle happens,” said Adam Falkowski, a theoretical physicist at the Laboratory of Theoretical Physics in Orsay, France. In this case, the solution to the four-particle interaction equation at first appears to be beset with infinities. But physicists find that this interaction can proceed in three different ways, and that mathematical terms related to the three different options perfectly conspire to cancel out the infinities, which permits a solution.

That solution is the graviton: a spin-2 particle that couples to itself and all other particles with equal strength. This evenhandedness leads straight to the central tenet of general relativity: the equivalence principle, Einstein’s postulate that gravity is indistinguishable from acceleration through curved space-time, and that gravitational mass and intrinsic mass are one and the same. Falkowski said of the bootstrap approach, “I find this reasoning much more compelling than the abstract one of Einstein.”

Thus, by thinking through the constraints placed on fundamental particle interactions by basic symmetries, physicists can understand the existence of the strong and weak forces that shape atoms, and the forces of electromagnetism and gravity that sculpt the universe at large.

In addition, bootstrappers find that many different spin-0 particles are possible. The only known example is the Higgs boson, the particle associated with the symmetry-breaking Higgs field that imbues other particles with mass. A hypothetical spin-0 particle called the inflaton may have driven the initial expansion of the universe. These particles’ lack of angular momentum means that fewer symmetries restrict their interactions. Because of this, bootstrappers can infer less about nature’s governing laws, and nature itself has more creative license.

The spin spectrum stops at 2 because the infinities in the four-particle interaction equation kill off all massless particles that have higher spin values. Higher-spin states can exist if they’re extremely massive, and such particles do play a role in quantum theories of gravity such as string theory. But higher-spin particles can’t be detected, and they can’t affect the macroscopic world.

In his work, Baumann applies the bootstrap to the beginning of the universe. A recent Quanta article described how he and other physicists used symmetries and other principles to constrain the possibilities for those first moments.

It’s “just aesthetically pleasing,” Baumann said, “that the laws are inevitable — that there is some inevitability of the laws of physics that can be summarized by a short handful of principles that then lead to building blocks that then build up the macroscopic world.”

Natalie Wolchover is a senior writer and editor at Quanta Magazine covering the physical sciences.