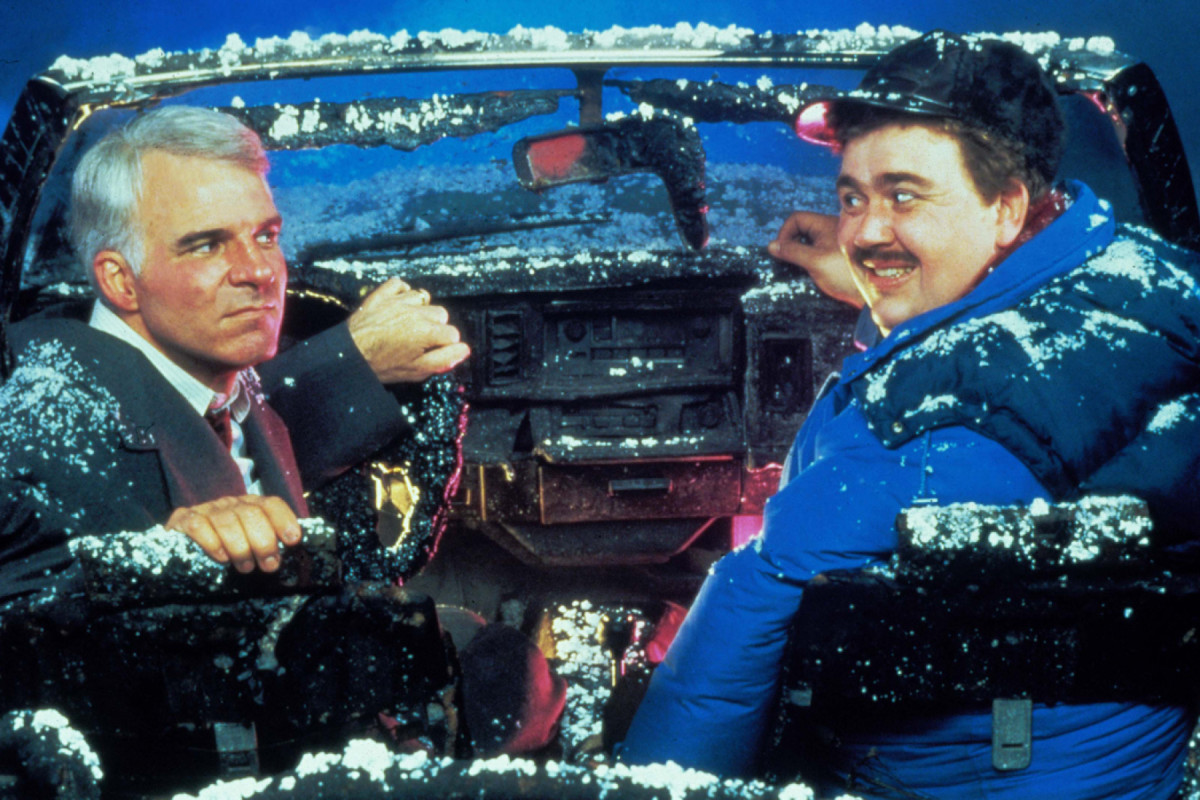 Why 'Planes, Trains and Automobiles' is the ultimate Thanksgiving movie – and how John Hughes turned a buddy comedy into a Turkey Day classic. Photo from Moviestore Collection/Rex .

Thanksgiving is all about the buildup.

You wait for it, that long weekend that you know will include family, maybe some football, plenty of food, and then leftovers and sales the day after that. Everything looks great in those weeks leading up to the fourth Thursday in November, until it all goes to hell, with that long drive probably filled with holiday traffic and the drunk relatives whose opinions you really don’t care to hear about. The anticipation of the holiday is fun. The drama that ensues during it is not.

That’s one of the many brilliant things about 1987’s Planes, Trains and Automobiles, the last truly great movie that John Hughes took on the triple job of writer, producer and director before slowly fading into the background, eventually all but vanishing from public view until his death in 2009. The buildup to the holiday weekend that Steve Martin’s Neal Page experiences as he tries to make it home from New York City to Chicago looks about as enjoyable as Dante’s exploration of the Inferno. And if we’re using that classic poem as an analogy, Del Griffith, played masterfully by John Candy, makes a horrible Virgil on the duo’s hellish journey back to the windy city.

Of course, this all equals comedic gold for viewers. Martin and Candy together is really the kind of pairing people dream of. The former, a few years completely removed from his standup days, was starting to inch away from zanier works like The Jerk and The Three Amigos and move closer towards his more family-friendly fare of the 1990s. For the latter, it was the start of a fruitful working relationship with Hughes, one that would see the SCTV alum go on to star in The Great Outdoors (1988), Uncle Buck (1989) and a small role in Home Alone (1990).

And for Hughes, it was the beginning of a new phase in his own career as well. Planes, Trains and Automobiles was his first attempt to make films aimed more at adults and kids, moving away from the teen movies that helped him make his mark in Hollywood. The Great Outdoors and Uncle Buck were both successful at the box office (though 1988’s She’s Having a Baby was a critical and commercial letdown), and the director would close out the decade by successfully revisiting the Griswolds, a family based off the short stories he wrote for National Lampoon in the late 1970s. Christmas Vaction was the first time Hughes would use the holiday as inspiration for his work; he’d return to December 25th as the basis for the first two Home Alone films, as well as the somewhat underrated (and way darker than you might remember) remake of Miracle on 34th Street. But while Planes didn’t bring in the same overflowing bags of box-office loot as the saga of Macaulay Culkin torturing two idiot burglars, it did end up as something else: a Thanksgiving classic.

For one reason or another, there aren’t just that many films centered around the turkeycentric November holiday. The two-year span that Woody Allen’s Hannah and Her Sisters covers is bookended by two Thanksgiving parties; the adaptation of Rick Moody’s novel The Ice Storm serves more as a cautionary tale that maybe you shouldn’t go home for the holidays if you want to avoid all kinds of insane family drama. If there’s a Thanksgiving feast involved in a film’s plot, chances are good that it’s there to heighten the story’s conflict, expose secrets and/or allow somebody to drop some kind of bombshell. Cue someone slamming their silverware onto the table and storming out of the dining room.

Planes, Trains and Automobiles is the opposite of all of that. The whole movie is about Neal getting home so he can enjoy the day with his family. That’s it. That is the goal. It starts out with someone trying desperately to leave New York City – a situation which Hughes, a former advertising executive who routinely took trips back and forth from Chicago to Manhattan, probably experienced more than a few times in his life. When he finally gets out of his pointless meeting, he has to compete with a nameless young man – hi there, Kevin Bacon – for a taxi during rush hour so he can make it to the airport on time. (It’s a somewhat fortuitous cameo, as She’s Having a Baby would arrive in theaters less than six months later.) When Neal does nearly nab a cab, it’s taken by somebody else – a guy who he ends up seeing at the airport, and whose fates are tied together for the entire rest of the film. Meet Del. 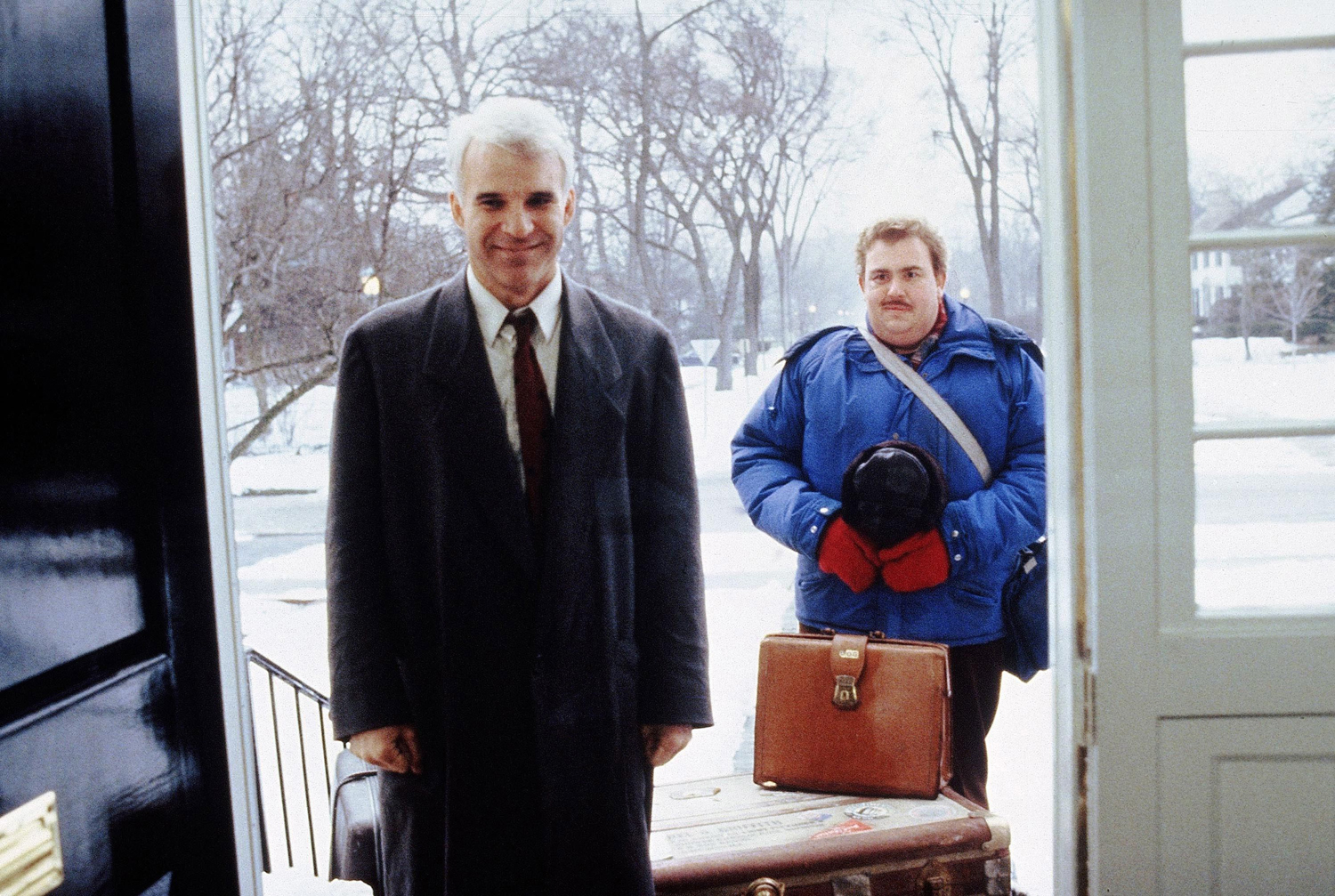 It’s fair to say that Planes doesn’t fit comfortably into the John Hughes filmography: It’s a road trip movie, a buddy comedy and his first attempt at a holiday movie. It’s a classic double-act farce that might not fit that well in the decade it came out in. There are no guns or bad guys like 48 Hours or any of the Lethal Weapon films; no winks at Cold War anxiety a la Spies Like Us ; and no time machine like Bill and Ted used in their excellent adventure. What it does share with a number of his best works is that mix of Norman Rockwell and Frank Capra in Reagan’s America vibe. Neal wants to get home to his family for the very American holiday; Del, as we find out by the end, doesn’t have any home to go home to, his wife having died eight years earlier. Despite whatever hell they’ve put each other through, they’re friends after all is said and done – and you invite friends over for Thanksgiving when they’ve got nowhere to go.

But then again, it might fit better than we think. As David Kamp points out in his 2010 Vanity Fair piece on Hughes a year after the filmmaker’s death, Candy’s character is from the same universe as other characters from the director’s more iconic films: “Molly Ringwald’s upper-middle-class character in Sixteen Candles, Samantha, was a passing acquaintance of Matthew Broderick’s Ferris Bueller, while Judd Nelson’s troubled Breakfast Club punk, Bender, came from the same forlorn section of town as Del Griffith, the hard-knock but relentlessly upbeat shower-curtain-ring salesman played by John Candy in Planes, Trains and Automobiles. ” If the film feels like it is part of something bigger, it’s because it actually is. Hughes had an entire fictional town of Shermer, Illinois mapped out in his head and, at least for some of his earlier films, most of his characters lived there.

Hughes would try his hand at a Thanksgiving film a few years later, writing and producing 1991’s Dutch, starring Ethan Embry as a spoiled brat and Ed O’Neill as his mother’s blue collar boyfriend, who’s tasked with getting the kid from his Southern prep school back to Chicago in time for turkey. A somewhat similar series of unfortunate events befalls the duo on their journey back, but compared to Candy and Martin’s road trip, the results don’t really hit the same way. Yet there’s something interesting about the fact that Hughes would revisit the formula. Either he really liked the holiday, or he was hoping the lack of films centered on the holiday maybe gave him a specific market to corner. It’s not so much that Dutch is a bad movie; more that Hughes had already made a better version a few years later.

Neal and Del go on a journey. You could be cheeky and connect other literary comparisons to their trek besides Dante’s Inferno ( Heart of Darkness and The Road both come to mind). They are tested, they almost die more than a few times, and in the pre-Internet and cellphone days, they’re left to their wits in the middle of the cold country without any money after Neal is robbed in his sleep. Yet they still persevere. There’s no giving up. Neal can taste that turkey and cranberry sauce and feel the warmth of his family gathered around the table. He has one singular goal in mind, and just as he reaches it, he thinks of somebody who is less fortunate than he is. He thinks of his new friend. He brings him home for dinner.

It all leads to that moment, and that’s why Planes, Trains and Automobiles remains the ultimate Thanksgiving film: John Hughes understood that it’s all about the buildup. No matter if your journey is filled with near-death experiences, cars going up in flames, punches to the face and other disasters – getting to enjoy Thanksgiving with family and friends make the odyssey worth it. Everything else is just turkey.

Jason Diamond is the author of Searching for John Hughes: Or Everything I Thought I Needed to Know About Life I Learned From Watching ’80s Movies.