Why No One Answers Their Phone Anymore 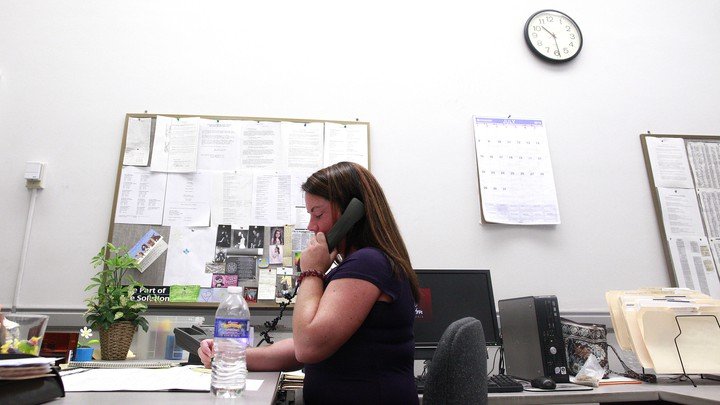 The telephone swept into Americans’ lives in the first decades of the 20th century. At first, no one knew exactly how to telephone. Alexander Graham Bell wanted people to start conversations by saying, “Ahoy-hoy!” AT&T tried to prevent people from saying “hello,” arguing in Telephone Engineer magazine that it was rude.

But eventually, Americans learned to say “hello.” People built a culture around the phone that worked. Etiquette magazines tried to prevent women from inviting people over for dinner via telephone, then gave in. The doctor got a phone, so the pharmacist got a phone. It didn’t happen quickly, but it happened. And once it was done, during my childhood, these social customs sat between me and this raw technical artifact—the handset, the curly cord connecting it to the base, the wires running across the nation, coming together in vast switching stations, amplified, multiplexed, and then branching back out to the other cities, other neighborhoods, other blocks, other houses.

In the moment when a phone rang, there was an imperative. One had to pick up the phone. This thinking permeated the culture from adults to children. In a Hello Kitty segment designed to teach kids how the phone worked, Hello Kitty is playing when the phone starts to ring. “It’s the phone. Yay!” she says. “Mama! Mama! The telephone is ringing. Hurry! They are gonna hang up.”

Before ubiquitous caller ID or even *69 (which allowed you to call back the last person who’d called you), if you didn’t get to the phone in time, that was that. You’d have to wait until they called back. And what if the person calling had something really important to tell you or ask you? Missing a phone call was awful. Hurry!

Not picking up the phone would be like someone knocking at your door and you standing behind it not answering. It was, at the very least, rude, and quite possibly sneaky or creepy or something. Besides, as the phone rang, there were always so many questions, so many things to sort out. Who was it? What did they want? Was it for … me?

“Hello, Madrigal residence,” I would say, and it would make sense of everything for me and whoever was on the other end of the line.

This became a kind of cultural commons that people could draw on to understand communicating through a technology. When you called someone, if the person was there, they would pick up, they would say hello. If someone called you, if you were there, you would pick up, you would say hello. That was just how phones worked. The expectation of pickup was what made phones a synchronous medium.

I attach no special value to it. There’s no need to return to the pure state of 1980s telephonic culture. It’s just something that happened, like lichen growing on rocks in the tundra, or bacteria breaking down a fallen peach. Life did its thing, on and in the inanimate substrate. But I want to dwell on the existence of this cultural layer, because it is disappearing.

No one picks up the phone anymore. Even many businesses do everything they can to avoid picking up the phone. Of the 50 or so calls I received in the last month, I might have picked up four or five times. The reflex of answering—built so deeply into people who grew up in 20th-century telephonic culture—is gone.

Telephone exchanges of that era were what the scholar Robert Hopper described as “not quite ritual, but routine to the extent that its appearance approaches ritual.” When the phone rang, everyone knew to answer and speak in “the liturgy of the national attitude.” Now, people have forgotten how to pick up, the words, when to sing.

There are many reasons for the slow erosion of this commons. The most important aspect is structural: There are simply more communication options. Text messaging and its associated multimedia variations are rich and wonderful: words mixed with emoji, Bitmoji, reaction gifs, regular old photos, video, links. Texting is fun, lightly asynchronous, and possible to do with many people simultaneously. It’s almost as immediate as a phone call, but not quite. You’ve got your Twitter, your Facebook, your work Slack, your email, FaceTimes incoming from family members. So many little dings have begun to make the rings obsolete.

But in recent years, there is a more specific reason for eyeing my phone’s ring warily. Perhaps 80 or even 90 percent of the calls coming into my phone are spam of one kind or another. Now, if I hear my phone buzzing from across the room, at first I’m excited if I think it’s a text, but when it keeps going, and I realize it’s a call, I won’t even bother to walk over. My phone only rings one or two times a day, which means that I can go a whole week without a single phone call coming in that I (or Apple’s software) can even identify, let alone want to pick up.

There are unsolicited telemarketing calls. There are straight-up robocalls that merely deliver recorded messages. There are the cyborg telemarketers, who sit in call centers playing prerecorded bits of audio to simulate a conversation. There are the spam phone calls, whose sole purpose seems to be verifying that your phone number is real and working.

The Federal Communications Commission has been trying to slow robocalls for at least half a decade, but it doesn’t seem to have done anything to stem the tide. YouMail is an app that tries to block these kinds of calls, and they create an estimate of how many robocalls are being made each month. The numbers are staggering and April 2018 showed them at an all-time high. 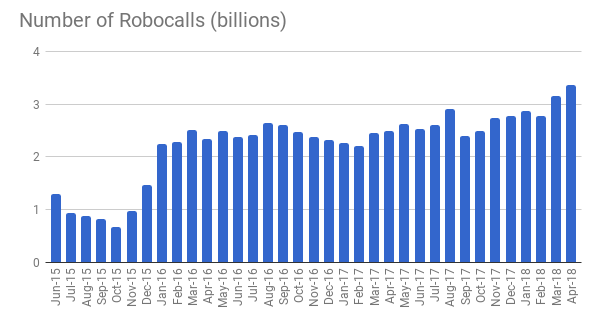 Telemarketers, of course, were the original people who took advantage of the telephone culture’s drive to pick up the phone. But people cost money, even my dumb teenage self calling up plant managers in Alabama trying to sell them software to manage their material-data safety sheets. People get bored with their crappy, repetitive jobs. People quit.

Machines—the software kind that can dial phone numbers, at least—are cheap. They don’t get drunk or go back to school or have a sick child. They just call and call and call and call. As often as not, when I’ve made the mistake of picking up, there’s just dead air, maybe just for a few seconds, as a person is patched in, or maybe—if I don’t say anything—for a while until the machine hangs up. Sometimes it’s a recorded message. And worse, most of the time I pick up, I’m giving the spammer valuable information that my number is a live number, which they will sell to the next spammer.

This happened 3.4 billion times last month, where someone had to make the decision to pick up or to let it go, and give in to the change.

Alexis C. Madrigal is a staff writer at The Atlantic and the author of Powering the Dream: The History and Promise of Green Technology.