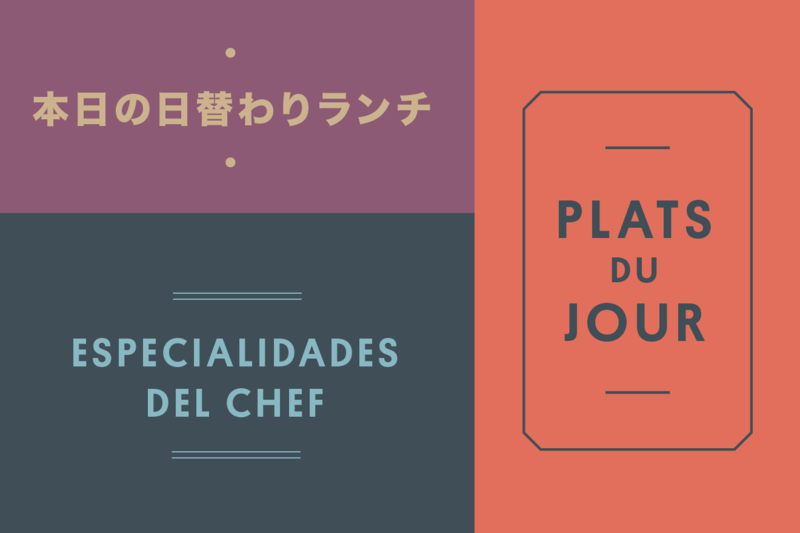 When I first came to Paris, I was confronted with a strange problem: I couldn’t understand restaurants’ English menus, even when I knew the French dishes. From “chicken in her juice” to “chicken wok way” and “baba with old rum,” menu translations ran the gamut from slightly-dirty to just plain surreal.

It wasn’t until I became a culinary translator myself that I realized just how hard this job is. I had assumed that laughable menu translations were the result of restaurant managers and chefs (with limited language skills) making mistakes. But even for fluent experts, food and menus are uniquely challenging to translate. (The results can be hilarious: We asked Atlas Obscura readers to tell us some of the best mistranslations they’ve seen, and you can admire them in this article’s images.)

Some odd menus, of course, are the result of mistranslations by folks unfamiliar with culinary terms. In Korea, notes Adeel Ahmad, a Canadian who resides in Seoul, ingredients uncommon to Westerners are often translated awkwardly or literally from a biology textbook—instead of seaweed, menus offer laver. 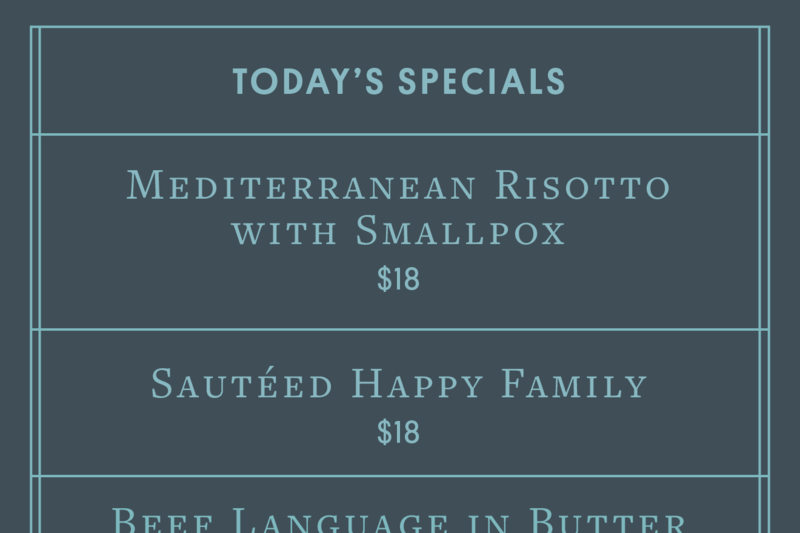 A common mistranslation involves writing “language” instead of “tongue.”

Startling mistakes are especially common when translating between alphabet-based languages (such as English and French) and ideograph languages (such as Chinese). James D. McCawley explores this in his book The Eater’s Guide to Chinese Characters: from the odd but understandable “ink fish” in place of squid to “stir-fried two winters,” which refers to two winter vegetables, mushrooms and bamboo shoots.

This problem is further exacerbated by the fact that many people translating menus may not be translators at all. “With so many restaurants doing menus that change on a nightly basis,” explains Nicole Felipe, an American translator based in France, “they can’t exactly get a professional translator every time a new dish comes out of the kitchen.” Simple typos have given the world many restaurant signs that say “Human Taste” instead of “Hunan Taste.”

But even someone with a firm grasp of both languages can find themselves stumped when confronted with certain menu items. This is especially true, notes Marrakech-based food and travel writer Amanda Ponzio-Mouttaki, because some food words just “don’t exist in English, or the words that are closest don’t really adequately explain what something is.”

She points to Moroccan mechoui, which, she says, “means slow-roasted sheep, but it’s not roasted in the way that it would be anywhere else.” The same issue arises with the international varieties of fermented dairy: Should it be “strained yogurt cheese” or labneh? Should quark be called a “German fresh cheese”? A similar question was posed in France when kale was reintroduced by Kristen Beddard of the Kale Project in 2012—should servers and menus call it chou plume, a pretty name that means “feathered cabbage,” chou frisé non pommé, a technically correct if lengthy term meaning “curly, non-knobbed cabbage,” or chou kale—an Anglicism that ended up becoming the norm?

A related problem is that food names or terms often have positive associations in one culture, but nowhere else. Cubans love ropa vieja (a shredded beef dish whose name literally translates to “old clothes”), Mexicans enjoy tacos sudados (literally “sweaty tacos”), and Moroccans are all about roasted sheep head. In Croatia, bitter flavors are valued, while in many countries, calling a dish or drink bitter is an insult. 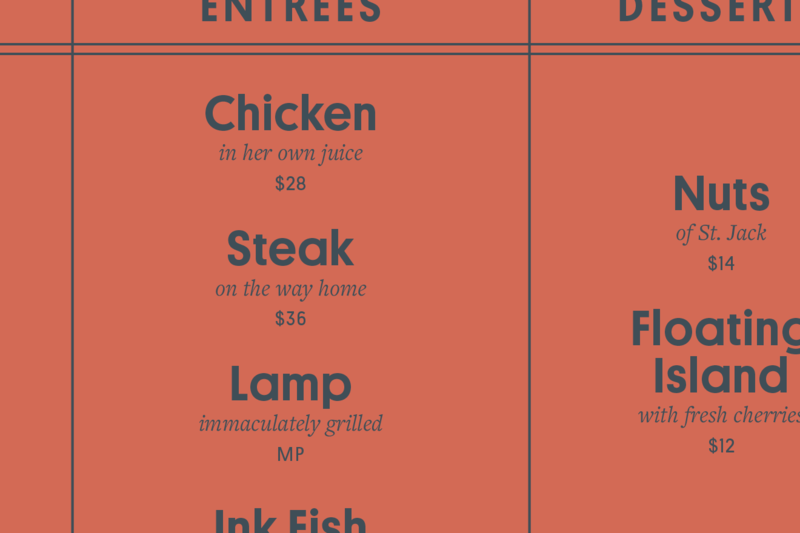 “Nuts of St. Jack” sounds like an odd dessert or snack. But it’s actually a French-to-English mistranslation that refers to scallops.

“Foods are frequently so culture-specific that it’s difficult to transfer the idea effectively,” says Jim Beason, a translator based in Strasbourg. “A bit like translating political satire from one country to the other—you understand the words, but your lack of cultural context means that it’s not funny at all.”

Perhaps the most poignant example of this is the current comfort food fad. “Traditional foods in particular are difficult to translate because they actually carry a lot of emotional meaning for any reader in the original language,” explains Fred Pouillot, the French-born bilingual founder of the Foodist cooking school in Paris. “Whenever one considers the translation in another language, it falls flat because it fails to evoke those same memories.”

Translation one: Floating Island. Good luck understanding what that even is intended to mean.

Translation three: A cherished childhood memory. A light and creamy vanilla-based custard is topped with a very light meringue. That meringue is actually made with one-third of the regular amount of sugar used in meringues, and is only lightly poached. And while it is floating atop the light custard (actually called Crème Anglaise), it is itself topped with a hardened caramel—cooked not too long, so it is rich in flavor but not bitter. And it is left to harden so that when you push your spoon into the floating island, you first break a bit of that caramel, push through the fluffy meringue, and finish with your spoon full of the crème anglaise. Three flavors and textures, which would make you believe a ménage à trois is a great idea in the kitchen.

Of course, Pouillot notes, this last translation is “not practical” on a menu, which would then become more of a technical manual. 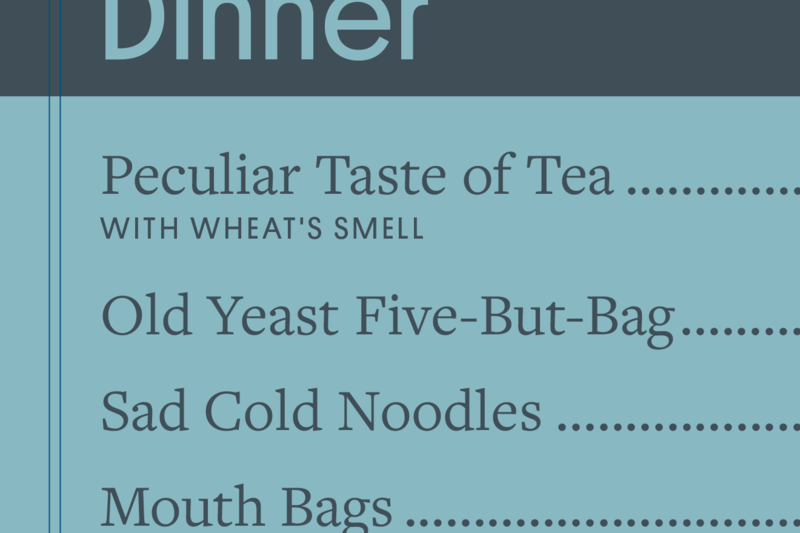 The mouth bags refer to Maultaschen, a German food similar to ravioli or dumplings.

This lack of adequate synonyms is further compounded by the fact that the ways in which we talk about food vary tremendously. “Food information is something that is startlingly hard to convey across cultures, because there’s a lot packed into it,” says culinary anthropologist David Beriss of the University of New Orleans. And different cultures don’t always agree on which information should be packed into those bite-sized descriptions on menus.

In French, for example, it is appropriate to highlight textural elements of food: Meat is described as fondant; raw vegetables as croustillant. Forgetting, for a moment, that poorly-equipped translators often transpose this as “melty steak” and “crispy vegetables,” textural indications are not sought after on English-speaking menus.

“At the expensive restaurant, you’re supposed to assume that the crispy food will be crispy,” Dan Jurafsky, a linguistics professor and author of The Language of Food told The Independent. “The cheaper restaurants are a little worried that you might not know. It’s a kind of status anxiety.”

These differing expectations—especially when it comes to writing in a way that indicates high-status—makes menu translations immeasurably trickier. In the United States, for instance, the current trend is to include references to ingredient sources. This, however, does not hold true across borders.

“If you just literally translate, ‘This is local, organic lamb, from the Baa Laa Lamb Farm,’ into Spanish or Chinese, it’s not going to necessarily signal any of the same things at all,” explains Rachel Laudan, Senior Research Fellow at University of Texas at Austin and author of Cuisine and Empire: Cooking in World History.

The solution may be to leave some things lost in translation: this lends an air of authenticity and exclusivity, something that Laudan notes has been sought after in menus from the moment they first arrived on the dining scene in the 19th century.

They were “not intended to enlighten as much as they were to discriminate,” she explains, noting that keeping menus in French lent them an air of exclusivity. Today, putting French on menus has the opposite effect, making menus seem overly fussy. But ostensibly English-language menus still feature words like sashimi, kimchi, and ceviche. Done right, it makes diners feel like insiders. But with obscure foods and ingredients, it alienates people. So which words should a translator leave untranslated? 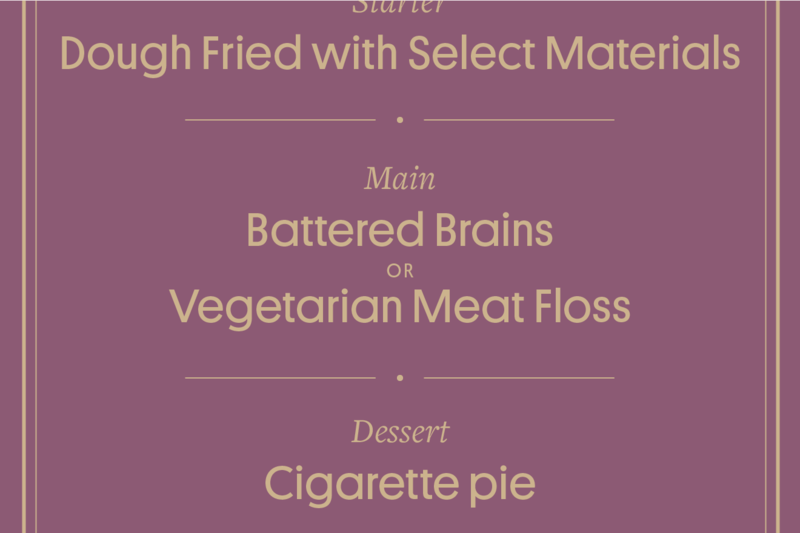 Cigarette pie refers to the shape, but it doesn’t translate well.

The answer, as with all translation, comes down to the source material. A menu is first and foremost an expression of a restaurant’s style: minimal, like le Restaurant in Paris, where each menu item is merely the name of its main ingredient, or verbose, like Terre à Terre in Brighton, which features the following literal mouthful:

With such an absurd range of menu styles out there, some of which seem ridiculous even to native speakers, a menu translator has to be a bit like a translator of poetry: able to mold cultural nuance from the original into something that will please, enchant, and delight foreign diners. Because when menu translation goes wrong, it’s worse, somehow, than bad poetry.