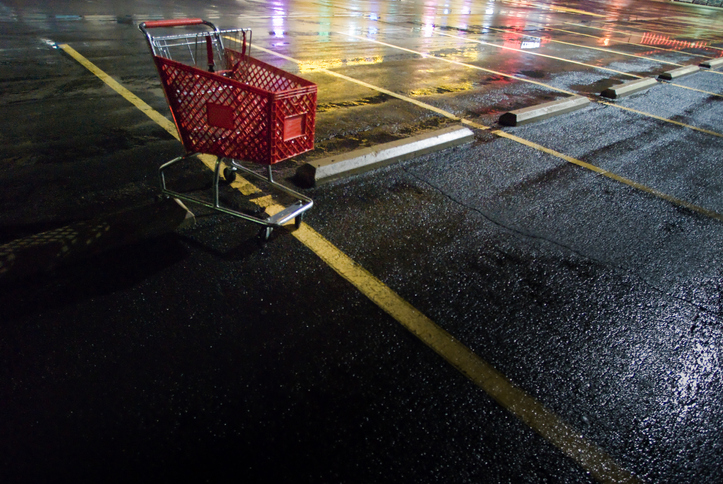 While some supermarkets are better than others, it's probably not unusual to find a few stray shopping carts littering the parking lot to the dismay of shoppers who may think that a parking spot is open, only to find that it's actually being used by a shopping cart. It seems like a basic courtesy to others: you get a cart at the supermarket, you use it to get your groceries and bring them to your vehicle, and then you return it for others to use. And yet, it's not uncommon for many people to ignore the cart receptacle entirely and leave their carts next to their cars or parked haphazardly on medians. During peak hours, it can mean bedlam. Where does this disregard come from?

Some supermarkets have tried to make this relatively easy: they have cart receptacles throughout the parking lot, a cart attendant to bring the carts back to the store, and some may even rely on a cart "rental" system where you pay for the cart and are reimbursed when it's returned. In the instances where there is no rental system, people may leave their carts stranded for some of the following reasons:

Similarly, there are five categories of cart users:

Social norms fall into two general categories. There are injunctive norms, which drive our responses based on our perception of how others will interpret our actions. This means that we're inclined to act in certain ways if we think people will think well or think poorly of us. And there are descriptive norms, where our responses are driven by contextual clues. This means we're apt to mimic behaviors of others—so what we see or hear or smell suggests the appropriate/accepted response or behavior that we should display.

Supermarkets can try and guide our behavior with receptacles or cart attendants, but they’re competing with our own self-serving goals, which in this case may be staying dry, keeping an eye on our children, or simply getting home as quickly as possible, and we’re being guided by the ways others behave on top of that. These goals can override the norm because the support provided by the supermarket—ironically—resets the situation before complete chaos is unleashed with carts running rampant in the parking lot. An attendant will most likely step in before that happens. So if we apply this definition of norms to our classification of cart returners, the injunctive norm applies the greatest pressure to Returners and Pressure Returners. These folks are concerned by what others will think of them on some level, and want to adhere to social rule mandating that the carts are returned. Descriptive norms are at play for Convenience Returners and Pressure Returners who are more inclined to act if there is precedent. These folks are more likely to return a cart if there are no carts parked haphazardly. The Never Returners and the Child-Driven Returners are two example of goal-driven actors, which means that they’re responding to a more individual need. These two are interesting as they’re on opposing ends of the spectrum but still demonstrate the ways an individual goal can work for or against a norm.

A 2008 study published in Science tested behavioral responses against the manipulation of injunctive and descriptive norms to see if a violation of one norm would lead people to violations of other, unrelated norms. In the first test, researchers targeted participants who parked their bicycles in two alleys. On the walls of the alleys were signs that indicated graffiti was not permitted. One alley had no graffiti, while the other did, despite the signs. Researchers attached a flyer to the handles of bicycles in both alleys so that the owners needed to physically remove the flyers. In the alley with graffiti on the wall, 69 percent threw the flyer on the ground or hung the flyer on another bicycle compared with 33 percent in the alley with no graffiti. The researchers reported that the anti-graffiti signs were readily visible and all entrants to the alleys glanced at the signs. The appearance of graffiti on the walls in defiance of the signs suggested that it was appropriate to break another norm: littering.

In the final test, researchers went to a parking garage that served a supermarket and a gym. In one scenario, four carts were strewn about the garage, and in another all carts were in the receptacles. The researchers left flyers on the windows of the cars in the garage and—you guessed it—58 percent of participants littered (i.e., threw their flyers on the ground) when there were unmanaged shopping carts compared with 30 percent when all carts were in the receptacle.

While there are always outliers—people who behave contrary to the norm for the sake of doing so—these scenarios are fairly illustrative of the ebb and flow of the social order. There are norms that are intended to provide overall governance for the benefit of society at large but as individuals we have goals that intersect with these norms and can create conflicts. Yes, we want to generally behave like others of our choosing because we want to be accepted, but we also have goals that serve ourselves or provide us with immediate satisfaction. The data above suggests that as a situation broaches on deviance, more people will trend toward disorder; once we have permission to pursue an alternative action, we will do so if it suits us. Not returning our shopping carts opens the door to throwing our circulars on the ground to parking haphazardly or in reserved spaces to other items that impact the quality of our experience at that establishment.

The world will likely not end because we aren’t returning our shopping carts—that would be an amazing butterfly effect—but it’s an example of a quality of life issue we can control. That guy who didn’t return his cart may not be a complete jerk. He may just be using the example set by others so he can get home a little more quickly. But if everyone does that, then we’re shifting the balance of what is acceptable, which may have greater ramifications to the social order. We have a greater influence over seemingly mundane situations than we realize.

Krystal D'Costa is an anthropologist working in digital media in New York City. You can follow AiP on Facebook.