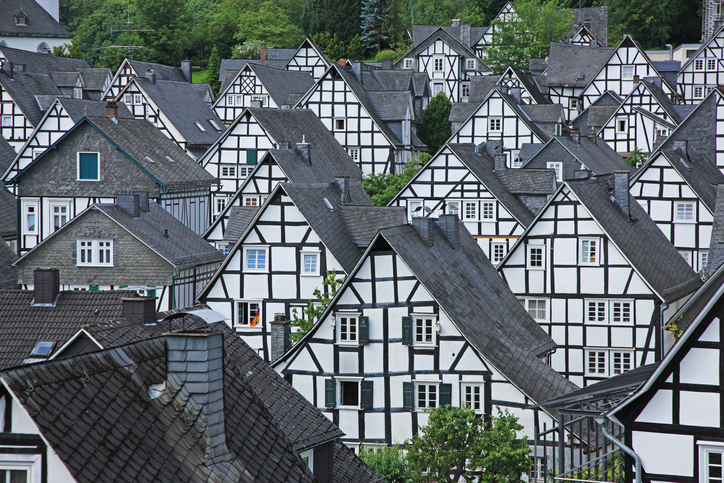 We're driven toward sameness because it ensures a continuity of experiences. Photo by Michael Duva/Cover/Getty Images

My leave one recent summer exposed me to all manner of television programming. The television was usually on in the background in my home in the afternoons adding to the hum of household noises--there comes a point when things are just too quiet. The best programs for this purpose came from the DIY/Home Improvement category, particularly as the networks tend to block the schedules for certain shows, so you could have an entire afternoon of house hunting in the Caribbean or fixer-upper renovations or landscaping endeavors. (Yes, there is a program that focuses on updating your backyard.) Naturally, in this set-up, a fair amount of programming repeats--not just in content, but in theme. But this repetition, other than making it somewhat easy to reduce the television to background noise--it’s not like it's the news, which requires active listening--can be insightful. The similarities in the content of the programs themselves suggest a common aesthetic appeal. Individuality is in huge demand. We live in an age that celebrates the person--it’s all about us in some way as we post tidbits of our lives or the things that interest us. So why are we striving to be the same from a design perspective?

Wooden floors. Open concept. Giant kitchen islands. Marble countertops. Large windows. High ceilings. Walk-in closets. Space for entertaining. Stainless steel appliances. These are some of the criteria that potential television home-buyers list when discussing what they want in a home. And while these items can be realized in different ways, and the locations for these homes can vary by show (lakeside property or island living, anyone?), the end result is remarkably similar: a very open floor plan to allow for uninterrupted sight lines while the children are in the living room or when guests are present.

This outlook isn't new. Within each age, there are markers of success within the home that people strive toward. The dining room was born in this way: eating was a public affair until it was moved inside to a private room in the eighteenth-century following the British royal example. Formal dining rooms were pretty common until the open concept arrived leaving us with a dining “area”that’s easily accessible from the kitchen and meant to promote a sense of continuity and access to other parts of the home.

In the 19th-century, home design in America was dominated by Victorian aesthetics. Gables and towers and gingerbread were signs of wealth for the upwardly mobile during this period. These elements are a far cry from the demands for today’s open layout. What happened? A cultural shift occurred in the early 20th-century that placed the popular emphasis on technological, industrial and social progress. In order to achieve these aims, according to Art Historian Sarah Burns, it was necessary to leave behind Victorian architecture and everything it represented. What followed was a concerted effort to discredit the style. These houses were dark as people often hung heavy curtains to protect their furniture from sunlight; they were heavy in that they often included layered architectural elements; and at the turn of the century, this style increasingly gained a sinister status as well, as the corruption of the Gilded Age was more widely exposed. The result was architectural design that trended toward clean and simple lines and omitted ornate design details that included arches and gables. It was a statement against a particular form of excess, and a declaration that the public outlook was changing.

The criteria that potential home owners list for their dream home are indicative of today’s cultural norms. We live in an age of social sharing so it's not surprising that we're looking to be open in our homes as well. We want to value relaxation in equal measure with productivity, and we want spaces that support these ideas. The rooms that are emphasized in a renovation or purchase in these programs are the kitchen, bathroom, and bedrooms. The first two are public social spaces. They need to be impressive much in the same way our social profiles should be impressive. We look to emphasize the positive aspects of our experiences online with the photos and statuses we share. Offline we want the social spaces within our home to encourage positive experiences for their occupants because that sends a message that we can afford to make people comfortable.

The voyeurism of our online social lives is present offline as well. We want to know what everyone is doing when they’re in the social spaces of our homes so we're knocking down walls to increase sight lines. We want large windows and high ceilings to enhance our sense of openness. The larger the windows, and the higher the ceiling, the less we believe we're saying we have to hide--visitors can see all. Meanwhile, in the sanctity of our bedrooms, we want space to be ourselves, so we look for large master suites that allow us to shed the physical requirements of conformity. These spaces are removed from the main flow of the home, and they're typically areas that guests don't visit, but they share the same traits: emphasis on space or use of space, with storage being a paramount concern. Large walk-in closets are needed to store the material goods that we use to manage our daily representation of self.

We're driven toward sameness because it ensures a continuity of experiences. Looking for a home with character often is solely a superficial request that applies to aesthetics that don't impact the experience of the home. It's fine if the exterior has some defining traits that cause it to stand out, as long as those defining traits don't offend the homeowners association. Once we're within the home, the same criteria apply as noted above. Each age has a "sameness." It's a matter of what that sameness will say about us when the next wave begins.