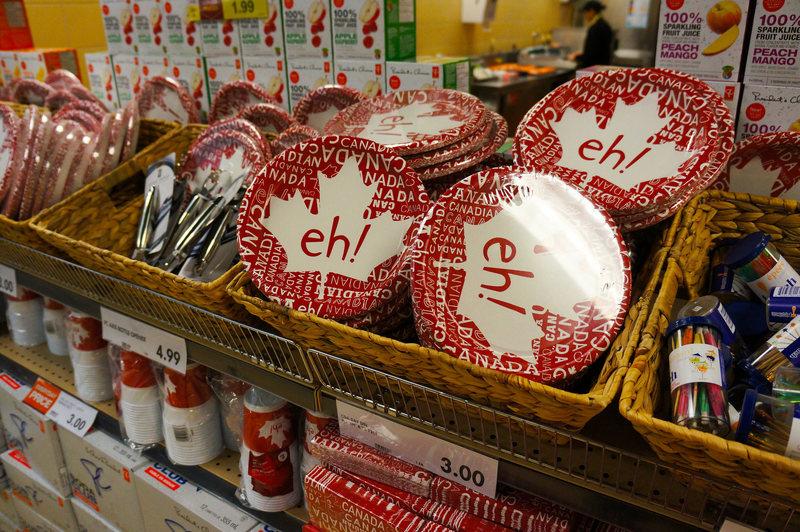 When I told friends in the Pennsylvania suburb where I grew up that I was going to college in Canada, their responses tended to come in two forms. One was about the weather; to a southern Pennsylvanian, any temperature below 25 degrees Fahrenheit is cause for panic. The other was a volley of linguistic stereotypes about the nation of Canada, involving either “aboot” or “eh.”

Canadians are not particularly amused when you eagerly point out their “eh” habit, but the word has become emblematic of the country in a way that is now mostly out of their control. In response, some have embraced it, adopting it as an element of Canadian patriotism. But what even is this word? How did it come to be so associated with Canada?

“Eh” is what’s known as an invariant tag—something added on to the end of a sentence that’s the same every time it’s used. A tag, in linguistics, is a word or sound or short phrase added after a thought which changes that thought in some way. The most common tags are question tags, which change a thought into a question. “It’s a nice day, isn’t it?” would be one example. The tag “isn’t it” turns that statement of fact into something that could prompt a response; the speaker is asking for confirmation or rejection.

“Eh” is invariant because it doesn’t change at all based on what you’re talking about; it remains “eh” whether you’re talking about one subject or many, now or in the past. But it’s also a lot more flexible than other tags—it isn’t just a question tag, but can be used for all kinds of things, and Canadians exploit this capability. 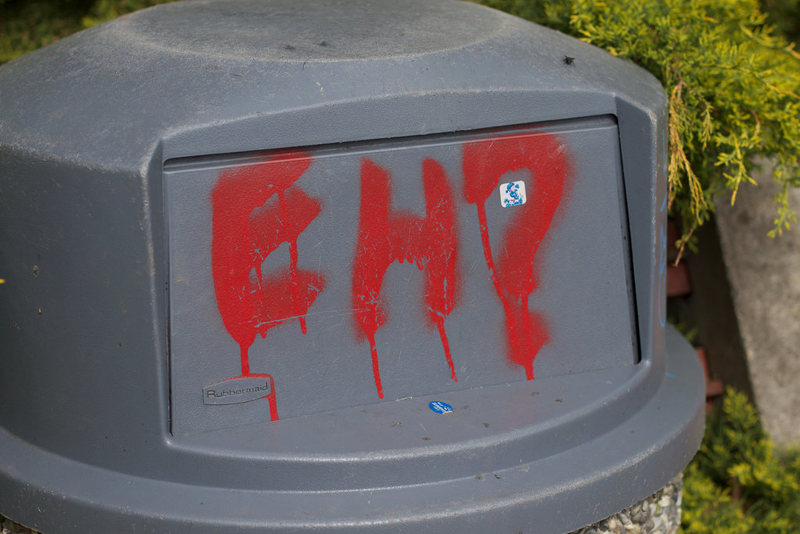 Graffiti on a trash can in British Columbia. Photo by Alan Levine/CC BY 2.0.

There are a few major ways a Canadian could use “eh.” The first is while stating an opinion: “It’s a nice day, eh?” Another would be as an exclamation tag, which is added to a sentence in order to indicate surprise: “What a game, eh?” Or you could use it for a request or command: “Put it over here, eh?” And then there’s the odd example of using it within a criticism: “You really messed that one up, eh?”

Jack Chambers, a linguist at the University of Toronto, writes that these “ehs” are all of a piece. “All of these uses have one pragmatic purpose in common: they all show politeness,” he wrote in a 2014 paper. Using “eh” to end the statement of an opinion or an explanation is a way for the speaker to express solidarity with the listener. It’s not exactly asking for reassurance or confirmation, but it’s not far off: the speaker is basically saying, hey, we’re on the same page here, we agree on this.

As a command, “eh” is singularly weird. Elaine Gold, the founder of the Canadian Language Museum and a recently retired lecturer at the University of Toronto who’s studied “eh,” used the example of a military sergeant shouting, “Forward march, eh?” It’s a command, but emphasizes that the listeners agree with it, that somehow the decision to march has been made and agreed upon by everyone. In that sense it also serves to weaken the speaker’s position: it removes the speaker from a place of power and puts some of that power in the hands of the listener. Theoretically, in response to “Forward march, eh?”, a listener could say, well, no, I’d rather not. It invites the listener to be a part of the speaker’s statements.

The final and most unusual use of “eh” is in what’s called a “narrative ‘eh’.” This is the variety you’ll hear in skits like SCTV’s Bob and Doug McKenzie: it’s found during stories, following individual clauses. “So I was walking down the street, eh? And I saw a friend of mine at the store, eh? And so I thought I’d say hi, eh?”

This use of “eh” is a bit different from the others; Chambers says the narrative “eh” is used to indicate to listeners that the story is continuing, to make sure the listener is still listening, and to signal that the listener should not interrupt because there’s more to come.

“Eh” has proven to be a very difficult thing to study; as an oral tic, it’s rarely written down, and studies have relied on self-reporting—basically, asking people whether and how they use the word. “It’s a very hard thing to do research on, really hard to quantify how much it’s used, who uses it, how it’s used,” she says. Those self-reported studies are necessarily flawed, as Canadians have a tendency to underestimate their use of the word. Gold told me about several instances in which people insist they hardly ever say “eh,” before using the word without realizing it in subsequent thoughts. (“I hardly ever say ‘eh,’ eh?”)

Because it’s so hard to study, it’s not really known where “eh” came from, or precisely when it entered the Canadian lexicon. Gold says that by the 1950s, the word was firmly established enough that in some articles it’s already identified as a Canadianism. Today, it’s actually heard outside the country as well; the sections of the U.S. Upper Midwest that border Canada often have “eh” speakers, and it’s fairly common in New Zealand as well. It is possible that the word came originally from some population of Scots-Irish immigrants, a major early group in Canada. “Eh” is still used in Scotland and in Northern England, but it’s used in a much more limited way, primarily to indicate that the listener hasn’t heard the speaker—it means “what?,” or “pardon?” In Canada, it’s mutated into a much more versatile interjection.

With the caveat that self-reported studies are not all that accurate, Canadian linguists seem to agree that “eh” is much less common in Canada’s cities and more common in rural areas, especially in the sparsely-populated west. “It’s considered rural, lower-class, male, less educated,” says Gold. Aside from males, those groups are all stigmatized, which means that any language features associated with those groups are stigmatized as well. Within Canada, saying “eh,” especially the narrative “eh,” is considered kind of a hick thing to do. This does not appear to have lessened the essential Canadianness of the word.

Other dialects of English and other languages have some similar tags. “Right,” “okay,” “yes,” and “you know” are all used in some of the same ways as “eh.” In French, “hein” (pronounced “anh,” the same vowel sound in “splat”) is quite similar, as is the Japanese “ne,” the Dutch “hè,” the Yiddish “nu,” and the Spanish “¿no?” These differ in some ways from “eh,” as “eh” can be used in some ways that the other tags cannot be and vice versa, but what really makes “eh” different is less about the way it’s used and more about its place in Canadian society.

“It’s really come to mean Canadian identity, especially in print. Even though urban people might not be using it so much anymore, in print it’s huge,” says Gold. The stereotype of Canadians saying “eh” is so strong that Canadians have ended up reclaiming the word for themselves, even those Canadians who don’t actually use it very often. A popular children’s book about Canadian culture is titled “From Eh? To Zed.” The first prime minister of Canada, Sir John A. Macdonald, is often referred to as “Sir John Eh.”

This isn’t uncommon; groups have a tendency to snag linguistic stereotypes and wave them with pride. In the US, perhaps the best example would be the citizens of Pittsburgh, who have turned “yinz,” their take on “y’all,” into mugs, t-shirts, and banners, and even refer to themselves as “Yinzers.” It’s messy when applied to an entire country, especially one as varied as Canada—a significant part of the population would never use the word, and would instead use “hein”—but it’s stuck. 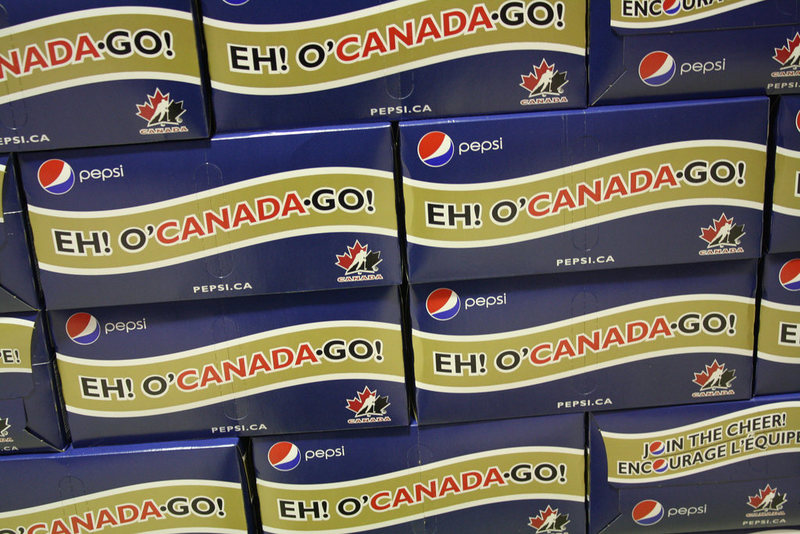 Even Pepsi incorporated ‘eh’ in their Olympic branding. Photo by Danielle Scott/CC BY-SA 2.0.

“Eh” may be associated with another stereotype of Canadians: the idea that they’re polite to a fault. After all, as Chambers noted, “eh” is a signal of politeness and seeking accord. Wouldn’t it stand to reason that an unfailingly polite population would make good use of “eh”? But Elaine Gold, who I should add was extremely polite during our conversation, disagrees. “There have been lots of articles about how ‘eh’ is used because we’re so nice. Like where someone else would make a strong statement, we undermine it a little, because we want to be friendly and inclusive,” she says. “I don’t know how much of that is true.”

But when your country’s most identifiable linguistic feature is a word that indicates inclusiveness, an openness to discourse, and a moderating effect on strong statements, it’s not such a crazy thing to assume that perhaps those qualities might be found in the people of that country as well. Even if the stereotype of the obsequious Canuck comes from outside the country, from brash Americans who don’t much care whether or not the listener feels included in their statements, Canadians have claimed “eh” as their own.