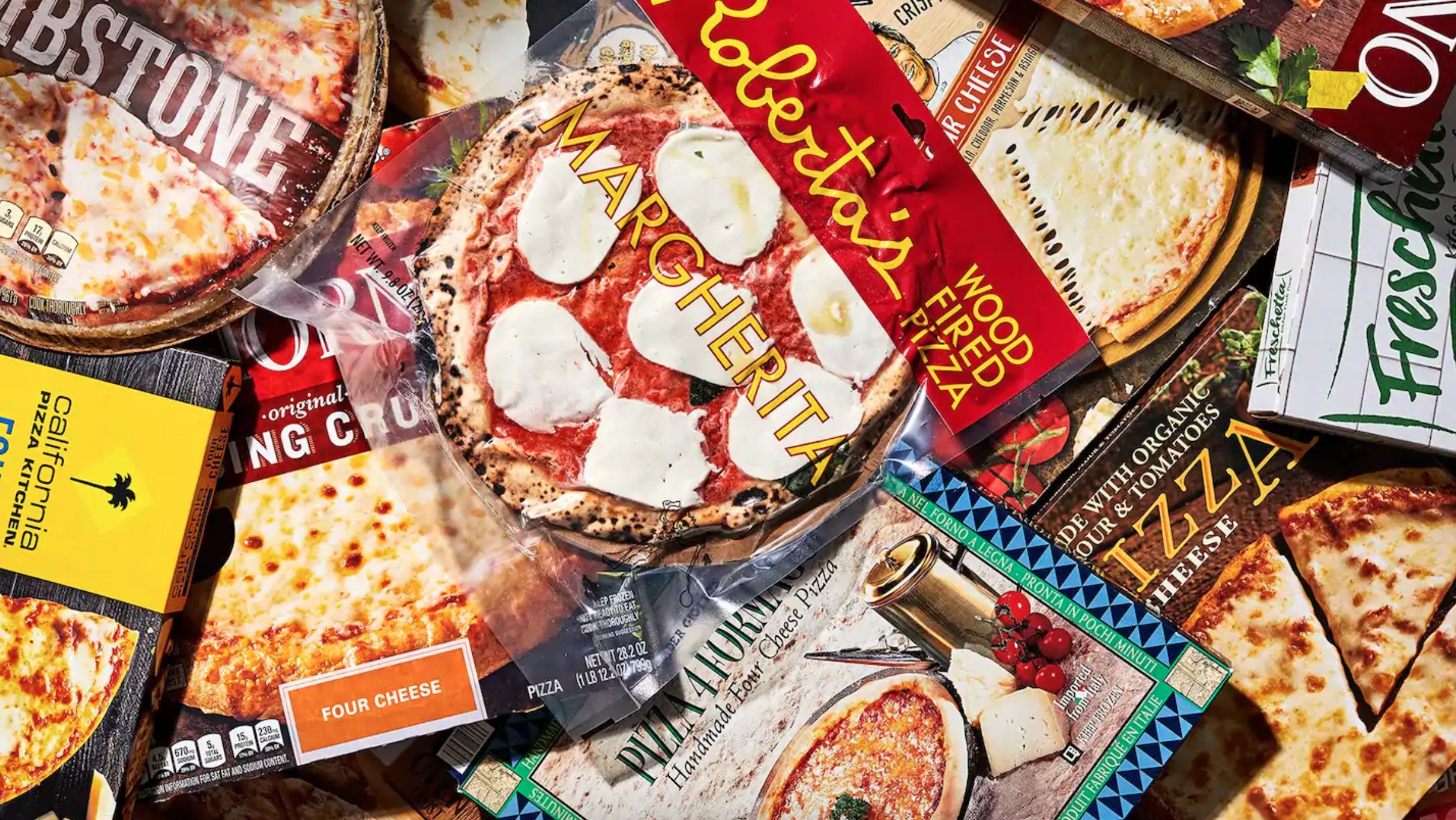 What makes a frozen pizza good isn’t the same as what makes a restaurant pizza good. That’s not only because one might be inclined to grade a frozen pizza on a curve. Frozen pizzas are an altogether different class, where things like nostalgia, convenience and the meltiness and mélange of cheeses take on outsize significance, compared to the more holistic outlook we bring to pizza prepared by someone else and eaten outside of our homes.

Frozen pizza is getting more popular, too, as more millennials are drawn to convenience. Food Dive reported that private-label frozen pizzas posted approximately 16 percent in unit sale gains and 11 percent in dollar sale gains from September 2017 through September 2018, according to market research from Information Resources Inc.

But, as with any pizza, the most important factor is still the crust. Is it crackery, as many frozen pizzas tend to be, or is it chewy and yeasty? Does it hold its own against the mountain of cheese these pizzas must support? Is it too hard, too soft or just right?

We tried 15 frozen pizzas to determine which one is your best bet for a night in and which one should remain in the freezer case. Of course, testers couldn’t help but draw comparisons, positive and negative, to restaurant pizza. Mentions of Pizza Hut, New York City dollar slices and elementary school cafeterias all made it onto our score sheets. But a restaurant pedigree did not guarantee good pizza: Tellingly, the best and worst frozen pizzas both come from beloved restaurant brands known for their pies.

Methodology: For the taste test — one madcap, sugar and salt-laden afternoon — we included house-brand pizzas for national store chains, such as Trader Joe’s and Whole Foods, but not regional chains. To keep them comparable, we tried only pizzas topped with sauce and cheese, and we did not include gluten-free crusts (sorry). We prepared all of the pizzas mostly according to the box’s instructions, though we left a few in our convection oven a tad longer because they appeared underdone when time was up. Basically: Our cheats were in service of the pizza’s flavor and texture, but sometimes, even those didn’t help. Each pizza was scored on a scale of one to five for its cheese, crust and sauce, with a maximum individual score of 15 per tester. With seven testers, that adds up to a total achievable score of 105 per pizza.

Here they are, in ascending order of tastiness, with a few tied scores.

The good state of California usually produces magnificent food, with this one being a huge exception. With its unique toppings like barbecue chicken, California Pizza Kitchen was considered a pizza innovator in the ’90s, but its frozen pizza left much to be desired. Testers were weirded out by the perforations on the bottom of the crust, which was described as “matzoh-esque.” “This hurts me and makes me sad.” “Just horrible.” “Everything is off, including the appearance.” “Why did it taste like BBQ sauce?” “Is there mustard in this?” “Why did someone do this? Do they hate people? Do they hate me, specifically?”

Tombstone is an apt brand name because our testers feel like death after eating this pizza topped with a generous sprinkling of bright cheddar cheese. “Is this just partially melted string cheese?” one tester asked. The crust “tastes like a bunch of mashed-up Saltines” and looked “like a pizza in a cartoon” or “the same pizza that came out of the microwave at my ice-skating rink.” “Why is it yellow?” The sauce is “sweet, probably the best thing here.” “Was it made entirely of salt?”

Tasters were underwhelmed by the “stale cracker” crust and “bitter” sauce. “The appearance of this one is particularly ominous” said one tester, who feared the “lumpy white mounds” of cheese. The crust was a “communion wafer.” “I really hated this.”

Testers didn’t have any praise for this one. The pizza was “ugly” with “too much sauce, no real taste.” The cheese was “very bland.” The crust was “greasy, pale and dense” “Overall: Meh.”

The cheese is “salty, kinda crispy in a good way” and in the sauce, one taster declared, “I see you, spices.” But it “tastes stale” and has an “unattractive oily sheen on the top of the cheese.” It “tastes like the word ‘congealed’ sounds.”

This doctor did not make us feel better. It was “slimy in the center but rubbery at the edge” with cheese (including, curiously, blue cheese) that turned out “a little goopy” but had a “decent tang.” The crust was like “pastry dough — and not in a good way.” As for the sauce: “Where is it? Did it evaporate?”

Ooof, this is harsh: “It’s not delivery, it’s disaster.” Testers dinged this pizza for a “gluey” crust — “I think I ate an entire rubber bouncing ball.” The sauce is “too sweet” and has a “weird flavor — like fennel?” It is very large and puffy, though, which our testers enjoyed: “I liked the heft.” A “pleasing-looking thicc-boi.” “This one is an absolute unit.”

The crust was described as “very floppy, doughy,” with “wet cracker energy,” and/or “glue stick energy,” but at least it was good looking: “I see specks of black! There is some chewiness and yeasty flavor.” There’s a “good balance of cheese” but the sauce is “forgettable.”

“There is virtually no sauce under all that cheese,” said one tester, but “what little there is does taste pretty good.” The crust is “ho-hum,” and one tester described it as “crackery, but soft: Worst of both worlds.” The sauce “tasted like sugar, mostly.”

Tasters thought the sauce was “bright and tomato-forward,” but the cheese, while “chewy in a good way,” was “tasteless.” It “reminds me of grade-school cafeteria sheet pizza,” said one tester, while another said it “reminded me (in a good way) of late-night drunk pizza in New York.”

The pizza was sprinkled with herbs, which were a point of contention among testers. “I love the visible herbs! It gives you confidence in this pizza,” said one tester, while another wrote: “Too. Many. Dried. Herbs.” The herbs were “bitter and overwhelming,” according to another tester. It’s “ridiculously rich, like a cheesy bread,” and “greasy and salty.”

On the “flavorful” crust, they “actually see some bubbles — almost like a real pizza.” The crust was “puffy a la Pizza Hut, but without the fried-in-oil crust.” Its cheese is “chewy in a good way,” though the sauce has “too much pepper in here.”

This extra–cheesy pizza was divisive among testers. Some thought the cheese was “Too thick and rubbery,” but others praised it: “It’s real!” The sauce seemed to be one of the favorites of the bunch: It “tastes like tomato more than the others,” is “nice and peppery” and has an “okay balance of sweet and salt.” “I taste herbs! visible oregano!” one tester marveled. One called it “the ugly duckling of the group.” (The cheese wasn’t distributed very well on the one we bought.) Another compared the crust to “hard tack.” Still, it managed to score well.

Our testers were all surprised to learn that this high-scoring pizza was the Target house brand. The crust “actually seems like it’s yeasted” and is “puffier, not in a bad way,” though another tester compared it to an “Olive Garden breadstick that has been sitting on the table for two courses.” The sauce has “a vague smoky flavor” with “decent mozzarella” that is “gooey [with a] nice texture.” However, one tester said the pizza was “a salt bomb.”

This was the fastest-cooking of all the pizzas — just heat it up until the cheese seems slightly melted (about six minutes), and you’re done. The crust was nicely charred and felt about as close as you could get to a restaurant pizza from the freezer aisle — which makes sense because Roberta’s makes some of New York’s most beloved pizza. Our testers said it “looks fancy-ish” with a sauce that was “nicely sweet.” They “appreciated the char and yeast flavor” on the crust, which was “crisp and pleasant.” The cheese “looks like fresh mozzarella.” “This could pass as decent restaurant pizza,” said one tester. “I’m a fan.”