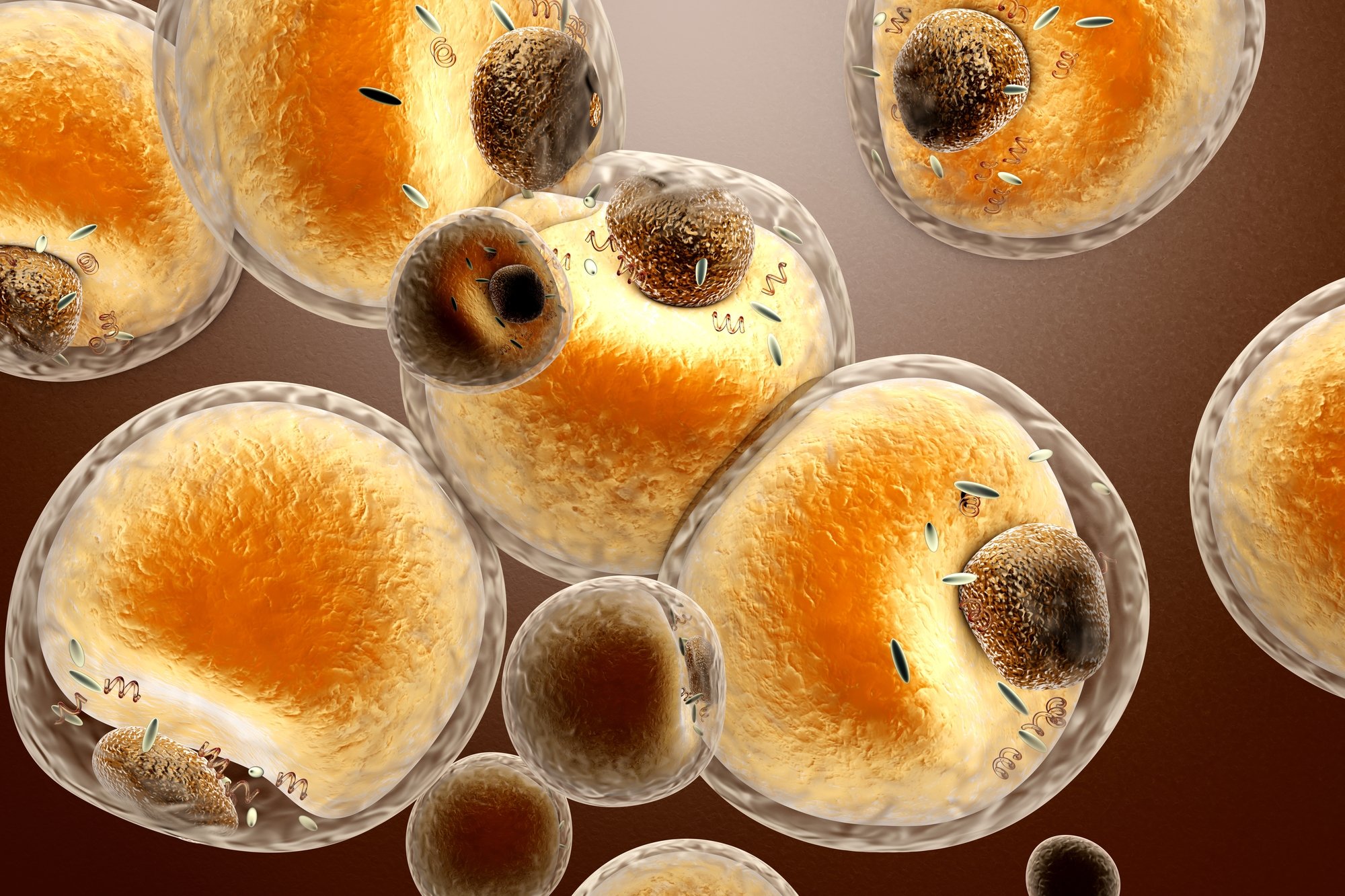 If cells were personified, each fat cell would be an overbearing grandparent who hoards. They’re constantly trying to make you eat another serving of potatoes, and have cabinets stacked with vitamins they never take.

Like that grandparent, your fat cells are always trying to store stuff. Fats? Of course. Vitamins? Heck yeah. Hormones? You bet. Random pollutants and toxins? Sure. Adipose tissue will soak all that up like an oily little sponge and keep it safe until you need it again. That’s the whole point of body fat—to store energy for you. When you lose weight, your fat cells start shrinking, releasing lipids and other fats into your bloodstream. These get broken down, and eventually the smaller molecules exit via your urine or breath.

But adipose cells release all the other molecules they've hoarded, too. That includes key hormones like estrogen, along with fat-soluble vitamins and any organic pollutants that found their way into your bloodstream as you gained weight.

Adipose tissue’s tendency to store things is an unfortunate side-effect, because often we need those things to be circulating, not sitting around. Take hormones, for instance. Female body fat actually produces some of its own estrogen in addition to storing it, and the more adipose tissue a person has, the more estrogen they’re exposed to. This is why being overweight puts you at an increased risk of getting breast cancer. Many types of breast cancer are caused by malfunctions in estrogen receptors, which are more likely to go haywire when more estrogen is around to stimulate them.

Vitamins pose the opposite problem. Adipose sucks up available fat-soluble vitamins (those stashed in adipose tissue instead of being excreted in your outgoing urine)—A, D, E, and K—and often doesn’t leave enough for the rest of your body. Studies suggest that obese people tend to suffer from vitamin D deficiencies because it’s all lurking in their adipose tissue. These vitamins can come back out as you lose weight, and as you decrease your body fat, you also allow more of your new vitamin D to stay in your bloodstream. Water-soluble compounds can just be peed out if you take too much of them, but because the vitamins stored in your adipose tissue can continue to build up you can eventually overdose on them. It’s rare, but it does happen.

Fat is also a (temporarily) safe space to store pollutants and other organic chemicals that might otherwise pose a threat. Organochlorine pesticides build up in fat, as do the polychlorinated biphenyls in coolant fluids and other chemicals from the “dirty dozen” of environmental contaminants. These banned chemicals can get into your food supply in small quantities and are stored in your fat, possibly because your body wants to sequester them away from your organs. Bodies don’t seem to store enough of these to become toxic, but the constant build-up leaves you vulnerable to exposure. And they do start to re-emerge when you lose weight.

Since you’re not eliminating all of your body fat at once, this doesn’t seem to pose a problem for most people. You’re dumping toxins into your bloodstream, but you’re also eliminating them through your pee. There’s some evidence that certain pollutants—so-called “persistent organic pollutants”—can stick around in your body fat for years, but so far it seems that natural toxin-elimination methods (also known as peeing) work well enough to get rid of them.

Safe or not, it’s best not to give your body a spot to stash all the hormones and vitamins it can hoard. Our bodies aren’t designed to hold onto excess body fat and stay healthy—that's why obesity is a risk factor for so many diseases. Getting rid of fat storage is just another reason to try and cut down on your own adiposity this year. Letting someone shame you into thinking you don’t look the way you should is not a wise reason to lose weight, but doing it to be healthier usually is.

Just think: every time you lose a pound of fat, you’ve also literally detoxed yourself without ever having to do one of those terrible juice cleanses (which, by the way, do not work). You’ve used the power of your own body’s filtration systems to get rid of them—and it will thank you for it.