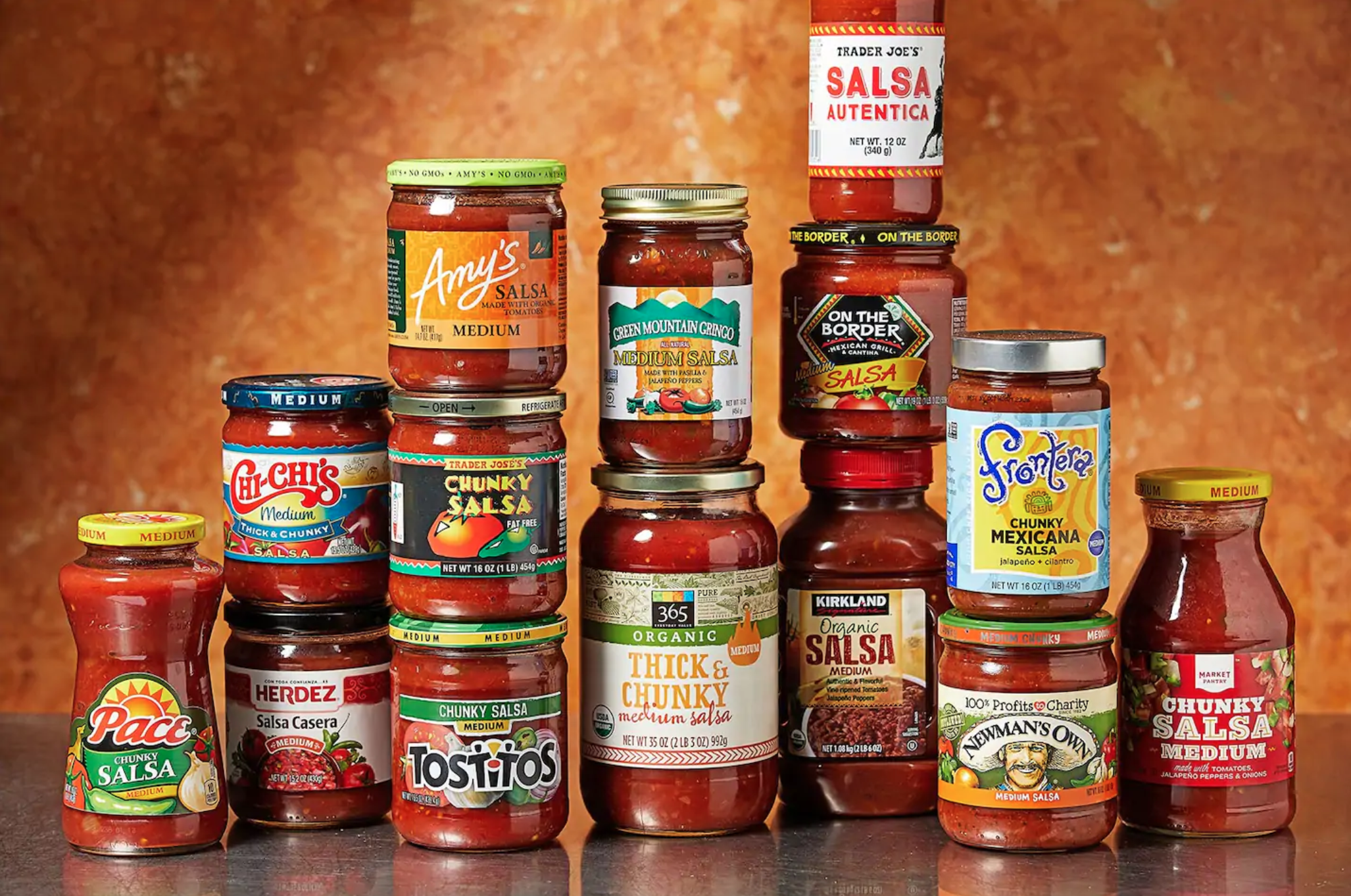 Open a jar of salsa and you’ve just completed most of the work needed to get a crowd-pleasing party snack on the table. (You also have to tear into a bag of chips, sigh, but that’s usually an even easier task.) Such convenience might explain the popularity of salsa, which famously dethroned ketchup as America’s reigning condiment back in the 1990s.

Since then, our jars have runneth over with dipping options: You can find versions of the tomato-based sauce laced with everything from peaches to pickles to Thai spices, and a range of spice levels all the way up to face-melting for the truly masochistic among your party squad.

So which of the options you’ll find on your grocery aisle deserves a spot amid your game-day spread? We assembled 14 nationally available brands, including the top sellers in the United States, and some of the most common store brands, along with a few bags of tortilla chips. To get as close to apples-to-apples as possible, we kept it simple and stuck to the “medium” spice level where it was available and the chunky style that is standard among the best-selling brands. Testers were asked to grade each salsa on a scale of 1 to 10, factoring in consistency and overall flavor. With 10 testers, the maximum possible score was 100.

The verdict? There are some decent options out there. But overall, we were left with a not-so-burning question: WHERE’S THE HEAT? This assemblage was about as timid as a meeting of Introverts Anonymous, which made us wonder that if these were “medium,” what were the “mild” varieties like? In other words, if you like your salsa with even a bit of kick, you might want to pick up a bottle of hot sauce, also, to wake up whatever jar you take home. But spice is only part of the equation — here’s how they stacked up, from worst to best.

This was the salsa we least wanted to show up at the party. Most of our tasters found it to be watery and bland, and the few that detected something in there didn’t like their discovery. If this was a musical genre, it would be heavy metal: “Tinny,” said one. “Canned tomato,” said another. “Tastes like what you’d make if you had to make food out of salvaged car parts.”

This was a slightly different formula than many of the others. Thinner than most, it was a universal disappointment. “Looks like a red-tinted spice-delivery system,” said one taster. “Tastes like it’s been sitting in plastic,” sniffed another.

There was one word on almost all our tasters’ lips when it came to this entry. “CUMIN MANIA. CUMINFEST. CUMIN-ARAMA.” Turns out, the spice is like your mother-in-law: good in small doses. The preponderance of the flavor here was just too overwhelming for our panel. Sample verdict: “When you unscrew the top of the cumin and the shaker top comes with it so you end up dumping the entire jar of cumin into this terrible salsa.”

Lots of tomato here, but not much else. “A sad, thin tomato sauce with a few green pepper lifesavers,” per one. Others took issue with the texture. “So goopy I think it just sold me a healing salve and a crystal,” said one. “Bleh.”

Thin. “School cafeteria salsa.” “Baby food mixed with V-8.” “A soup that feels like a swamp of industrial runoff.”

Suffering from insomnia? Maybe try a spoonful of this sleep-inducing blend. “Is there anything happening here?” “Dull.” “Doesn’t taste like much.” The letter grade for this one was a resounding “Zzzzzzz.”

This one had promising flecks intimating that roasted veggies (and maybe some flavor?) were at hand. But a taste proved this to be all false promises. Several tasters found it unpleasantly sweet. “How come they dumped a sugar bowl in this one?” wondered one.

A number of tasters likened this one to something you’d be more likely to find topping spaghetti than tortillas. “Are we sure this isn’t pasta sauce?” wondered one. “Smells like marinara.” “Not the best, not the worst.”

Tasters identified some cumin notes in this one, too, though they merely gave it a “muddy taste,” according to one. A tiny bit of heat was welcome, but overall this got a lot of comments along the lines of “meh.”

A touch too sweet, but several tasters praised the look of the visible vegetable chunks. “But they don’t add flavor,” complained one. “Not offensive” and “meh-plus” were the kinds of compliments the committee could muster.

The onions in this number jumped out at some tasters (and let’s just pause for a second and recall the iconic salsa moment that was the brand’s long-running ads in which cowboys mock other salsas made in “Newww York Ciiiity”). “Clearly distributed by the Leftover Onion Producers of America,” joked one. “At least they put onions in there,” said another. “Good job, guys.”

The market-dominating brand proved why it’s the top seller by being a consensus pick, even if what we agreed on was that it wasn’t too bad. That might not be the kind of ringing endorsement that, say, a presidential candidate might want, but it was enough to make this a top choice. “Bright and salty in a good way,” said one. “Just fine,” was a typical sum-up.

Smoky and spicy, this one elicited a lot of exclamation points — of the positive variety. “Nice smoky profile!” said one taster. “I taste chipotles and what a welcome change this is!” said another. “Actually tastes like salsa.”

This one was the looker of the bunch (“ooh, pretty veg”; “the beauty!”), but it didn’t have to rely on its photogenic qualities — this salsa delivered on flavor, too. Tasters seemed to appreciate the more assertive pepperiness, which distinguished it from some of its zestless brethren. One praised its “tingle of spice,” and another seemed surprised, given all the salsa-grazing we had done, that he “wanted to keep eating.” Another tester gave it a full endorsement: “I’d buy this one — nice heat.”