What Happens to All Those Beads After Mardi Gras?

The city of New Orleans pulled 93,000 pounds of beads from just five blocks of storm drains in 2018. 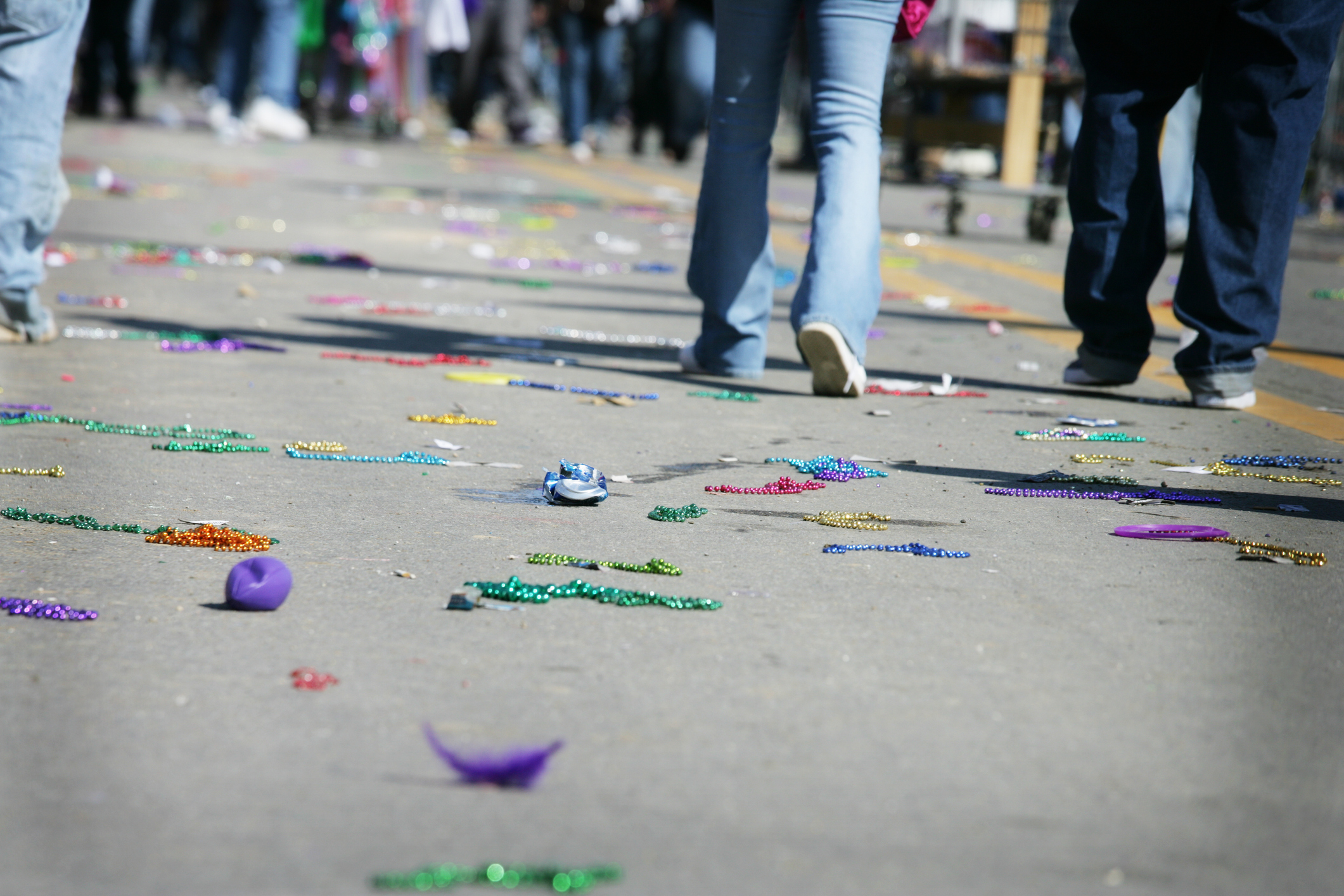 New Orleans celebrated Mardi Gras for decades before paraders rewarded their admiring throngs by hurling objects at them. By 1913, beaded necklaces had become the currency of the holiday and were named after what paraders did with them: “throws.” Dozens of parades are conducted every year by groups of revelers called krewes, some many decades old. All of them, every year, toss millions of pounds of beads and other items to observers, who wear them, take them home, cherish them forever—or just leave them on the streets of the French Quarter.

More than a century later, and five decades after cheaper imported plastic entered the scene, Mardi Gras beads are the celebration’s ubiquitous symbol, particularly after the crowds disperse and costumes are put away. 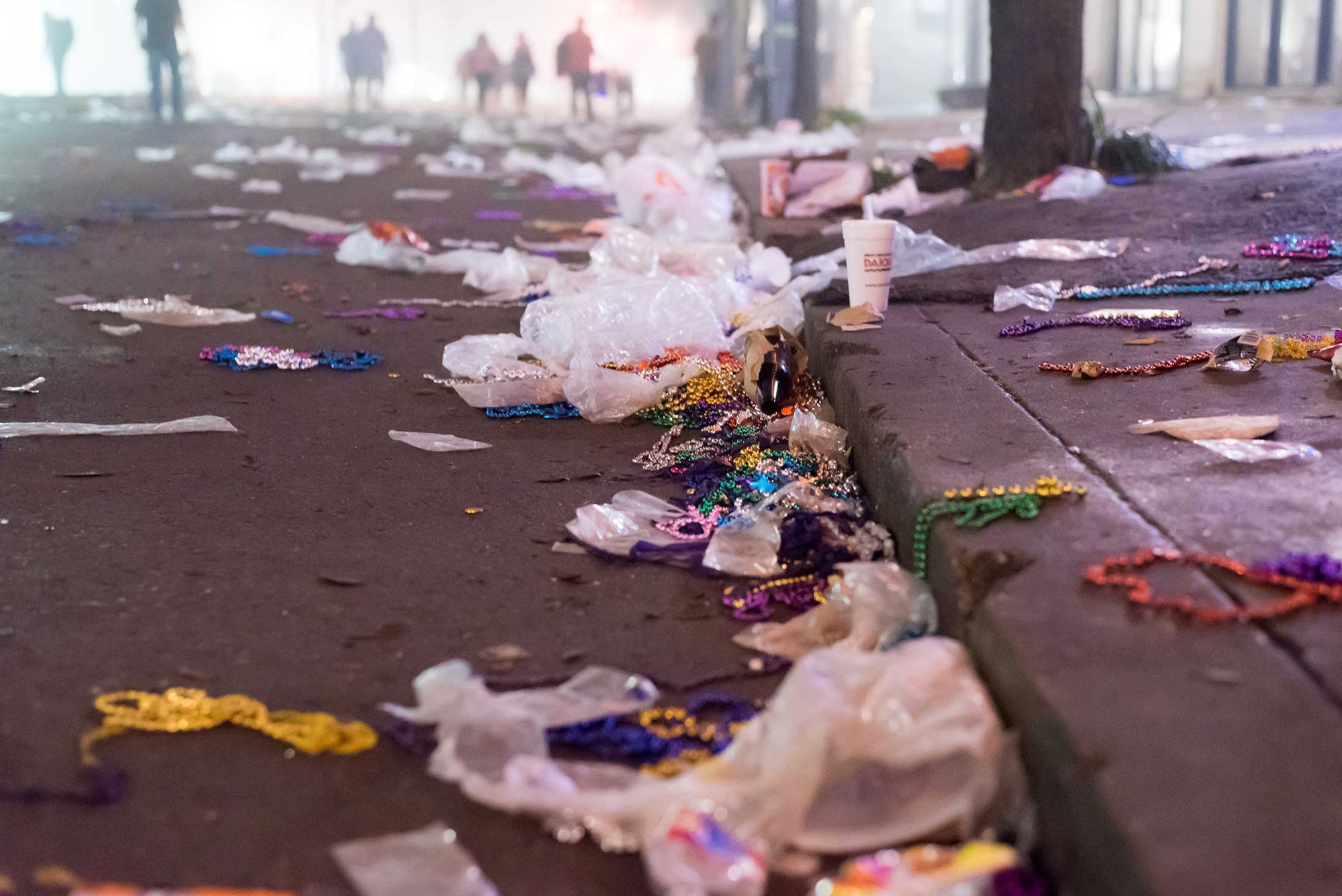 The population of New Orleans swells to three times its normal size this time every year, when more than 1 million tourists converge for Fat Tuesday. The festivities bring in an estimated $165 million to the city, as well as serious trash, which is why several dozen construction machines stand ready to clean up before the party even gets started.

Some 45 million pounds of plastics make their way to New Orleans every year for Mardi Gras, more than half of which consists of beaded necklaces. In January 2018 the city said it had pulled 93,000 pounds of beads from just five blocks of storm drains and more than 7 million pounds of debris overall, the Times-Picayune reported.

All that’s not only an eyesore. The cheap plastic contains trace amounts of contaminants, including lead, a dangerous neurotoxin that can leach into soil and water, according to research conducted by Howard Mielke, a professor in Tulane University’s department of pharmacology. “That’s old soil that has had years and years of exposure to lead. Kids pick beads up off the ground and don’t know [the beads] have been contaminated by the parade route itself,” Mielke told the Times-Picayune.

The lead comes chemically locked into the beads and becomes more likely to leach out through use, weathering, and age. 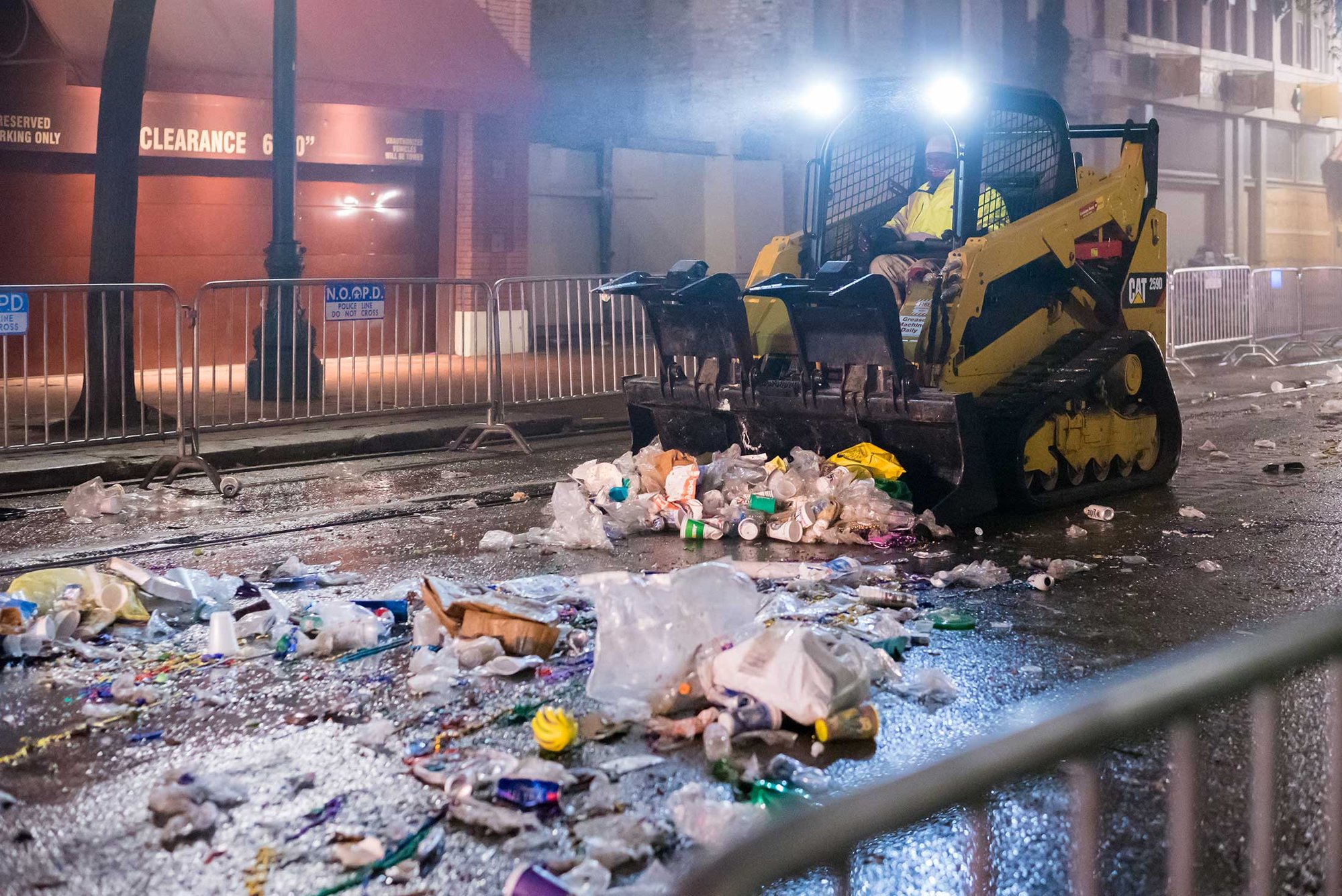 A bulldozer shovels trash and debris into a dumpster on St. Charles Avenue in the Central Business District on March 1. More than 100 pieces of heavy equipment are used to clean the streets following the parades.

Recycling is limited, but is drawing more attention, particularly after the city announced the volume of beads trapped in stormwater drains. The city now offers dozens of locations where people can drop off their beads for recycling and, if desired, buyback. An early adopter of recycling was ArcGNO, an organization that creates jobs for children with intellectual disabilities, in part by collecting, cleaning, repackaging, and reselling throws. 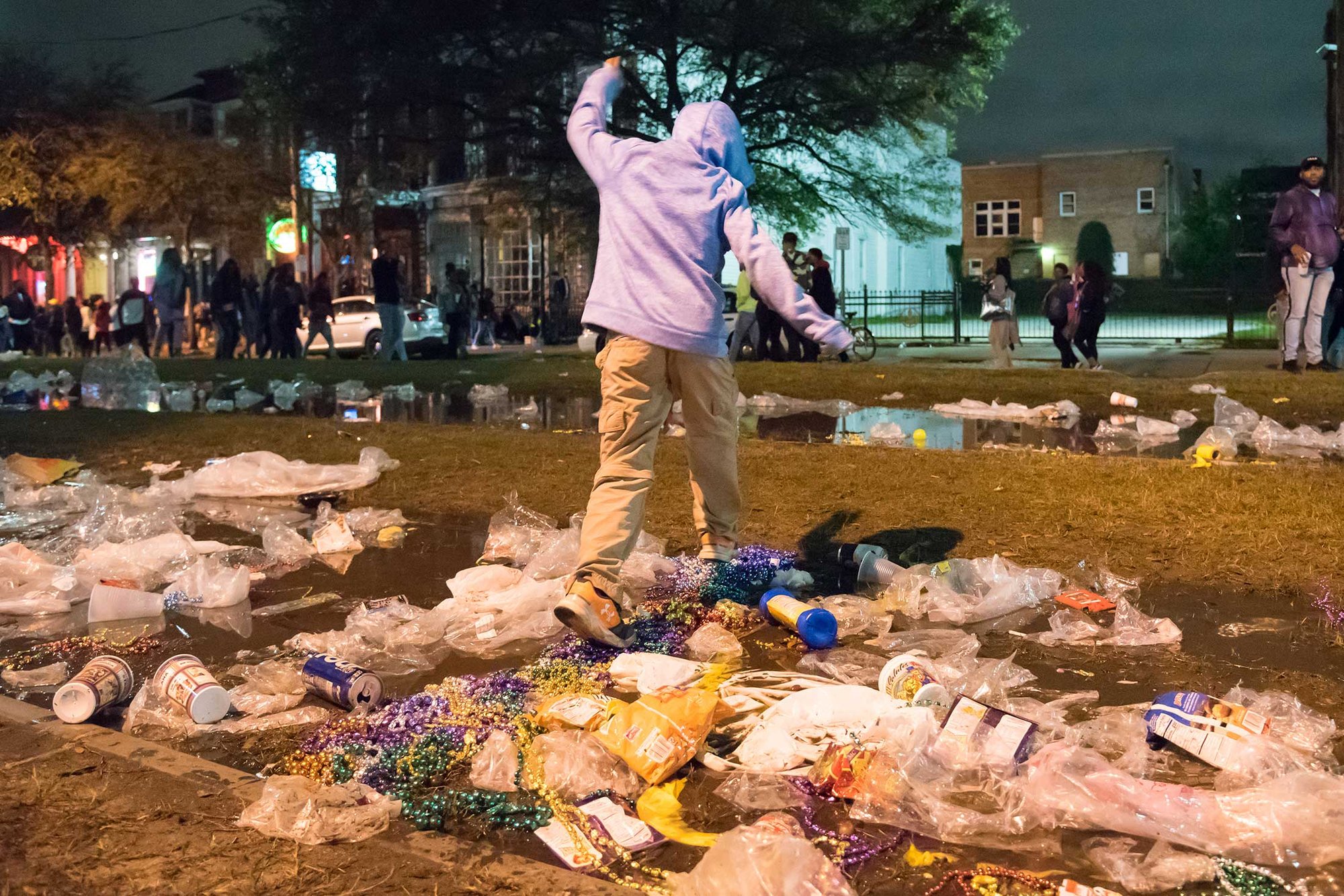 Resourceful revelers put the still-shiny plastic detritus to good use, if only for a short time, as a temporary “bead bridge” built across the St. Charles Streetcar track after the Bacchus parade on March 3.

Much of the throw debris ends up in landfill. In 2013, Naohiro Kato, a Louisiana State University associate professor of biological sciences, learned about the scale of the problem at a Mardi Gras party and began to wonder if naturally produced chemicals might allow production of biodegradable beads. Biodegradable plastics have been around for many years, but their expense would prohibit manufacturing them into what are literally throwaway baubles. 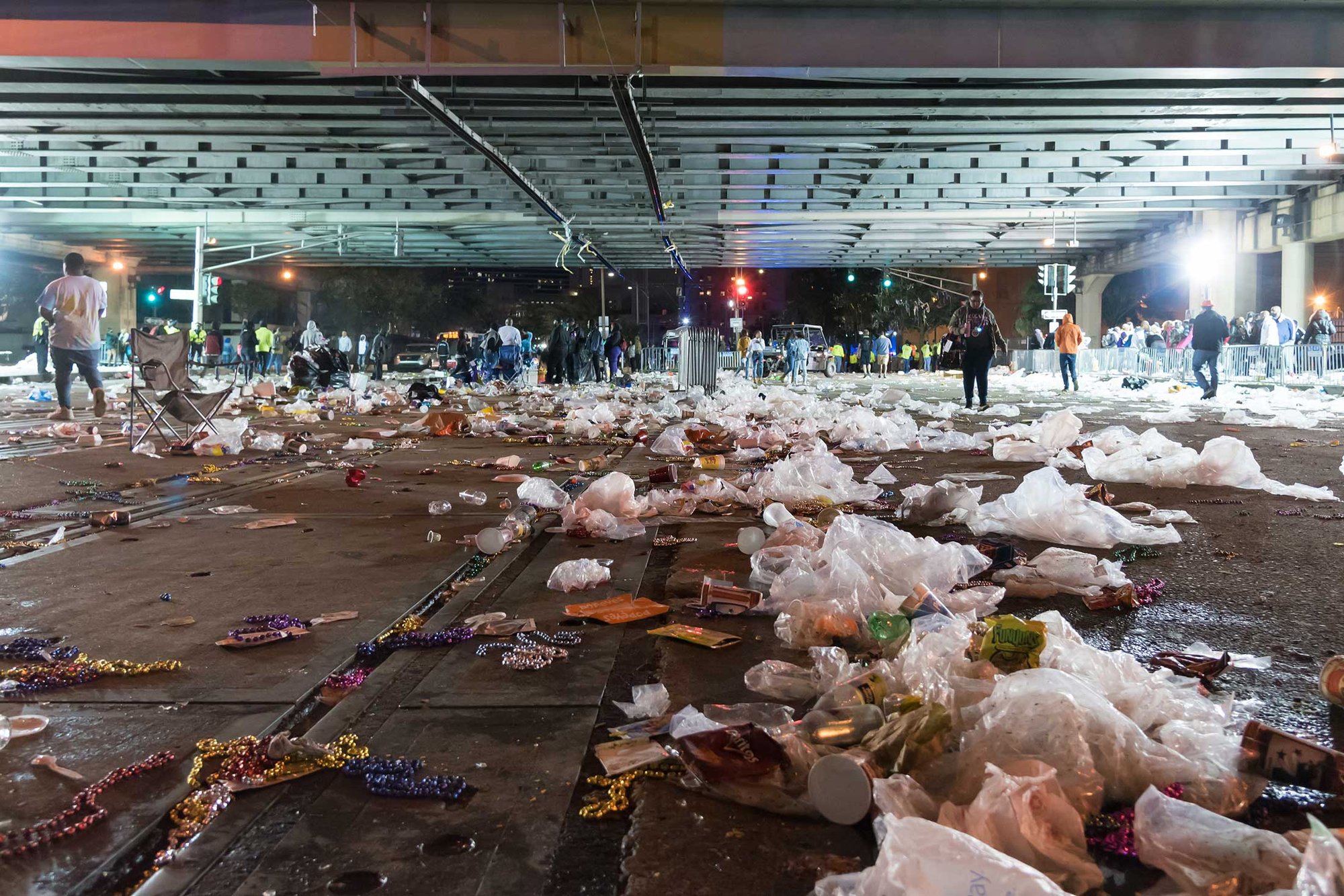 Beads and debris underneath the Claiborne overpass following the Bacchus parade.

An LSU graduate student made an unexpected discovery about a certain strain of algae that can produce (relatively) enormous amounts of an oil that could be used as a feedstock for plastics. Most commercial plastics are made from natural gas or petroleum. Kato realized he might be able to slash the cost of producing biobeads by generating and selling an antioxidant chemical valuable to the pharmaceutical industry. By the middle of this year, he expects to have his first 3,000 biodegradable necklaces, he said.

Kato said his conversations with other New Orleanians led him into a potential paradox. Many told him that the notion of biodegradable beads was so novel and charming that they would want to keep them forever as unique keepsakes. But keeping them forever would defeat the purpose (and expense and time) of making them biodegradable in the first place. Given the scale of the problem, it’s only a theoretical conundrum for now. “I don’t expect we can replace all the beads, and it’s not necessary,” he said. He just wants to make a dent in the problem. 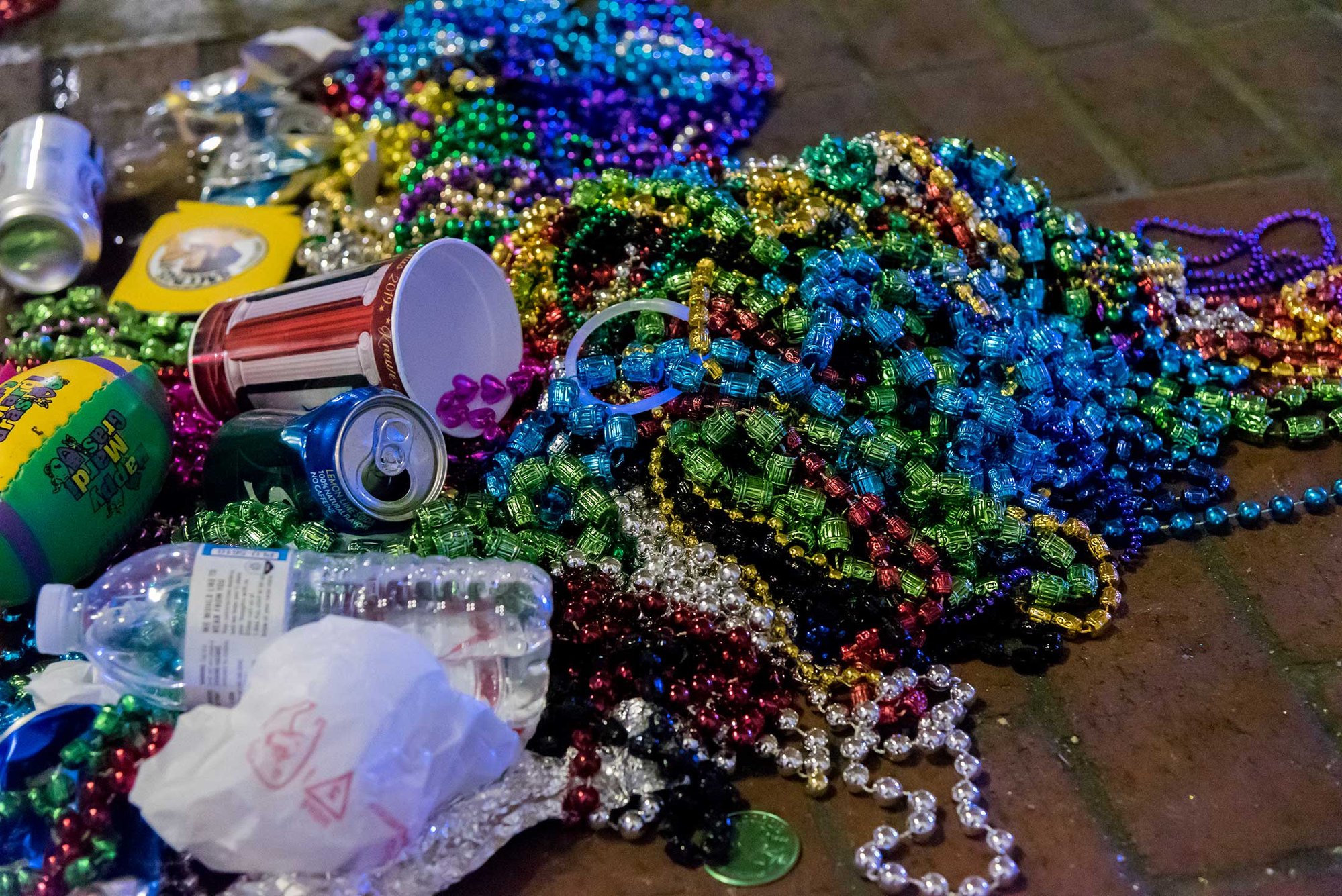 Piles of beads and trash such as this one at the intersection of St. Charles Avenue and Canal Street litter the streets and sidewalks along the entire 7-mile parade route on March 3.

No trash is as glorious as Mardi Gras trash. Green, purple, and gold became the holiday’s signature colors in the Rex krewe’s first parade, in 1872, when a newly installed “King of the Carnival” broadcast in advance that balconies should be draped thusly, according to local historian Errol Laborde. “Less clear is why Rex chose that combination,” he wrote, although his research suggests it may have had something to do with the conventions of heraldry, which posit that tricolor flag and emblems should consist of both colors and metals.

The colors show up as team colors at rival local universities, with LSU known for its purple and gold and Tulane wearing green.

An additional color showed up last year. Orange is the new block for New Orleans stormwater drains. After the city realized the scale of the throws problem in early 2018, it laid out $30,000 for 200 “gutter buddies,” water-permeable sleeves of pebbles that keep necklaces and other debris from flowing into drains. 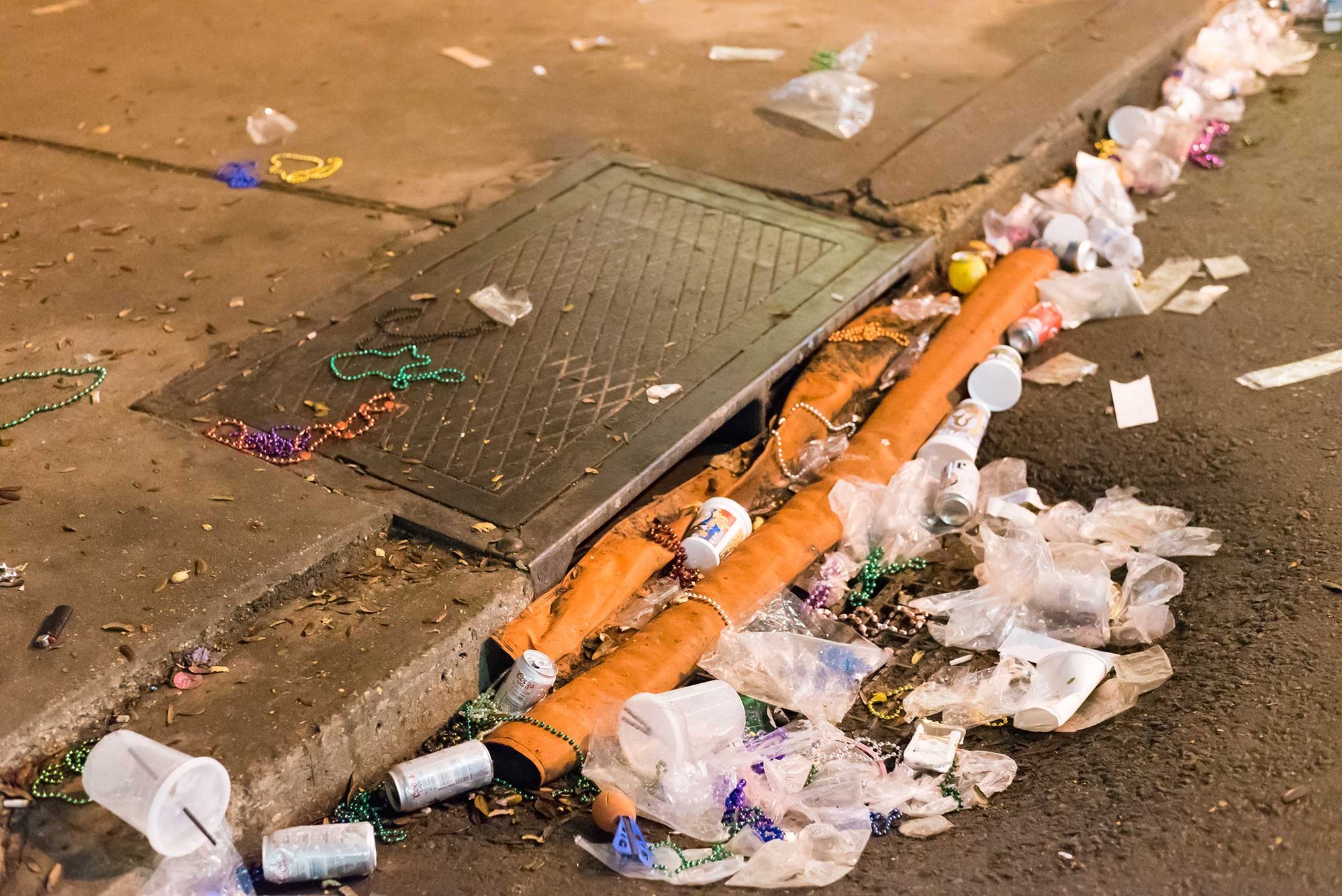 A “gutter buddy” is intended to keep beads and plastic out of the drainage system along St. Charles Avenue in the Lower Garden District after the Morpheus parade on March 1.

A 2014 analysis of how much income Mardi Gras brings to the city concluded that it generates more than 2 percent of New Orleans’s $21 billion gross domestic product. Cleanup-related expenses tallied in the study included more than $230,000 for workers, about $825,000 for equipment, plus other expenses, which brought the sanitation grand total to almost $1.5 million. 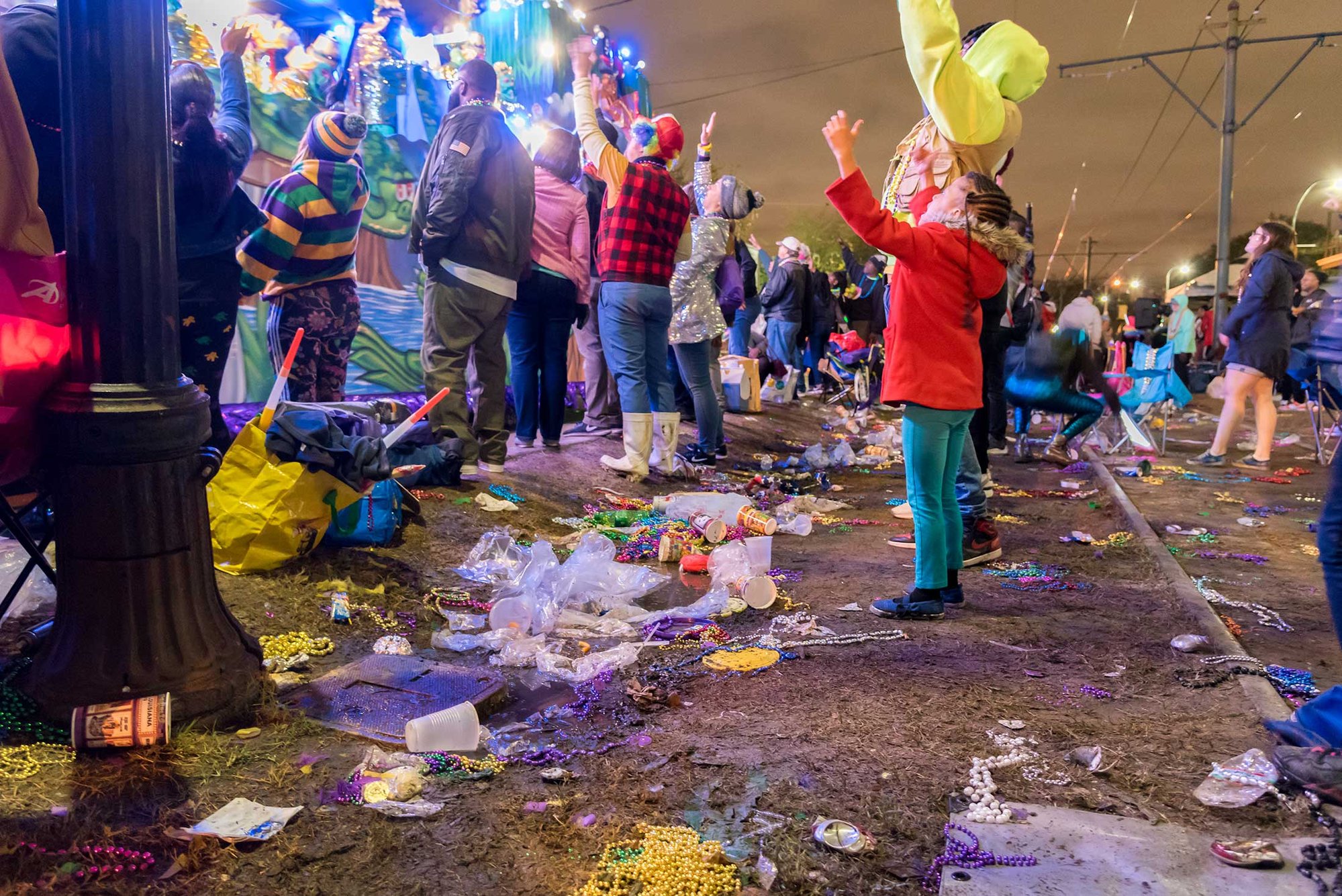 Spectators call for more beads as the Bacchus parade passes along St. Charles Avenue in the Lower Garden District on March 3.

Mardi Gras ends when the city says it ends, and without delay. Bourbon Street’s last parade of the season is led by Mayor LaToya Cantrell and populated by horse-mounted and marching police officers, as well as fire department personnel. 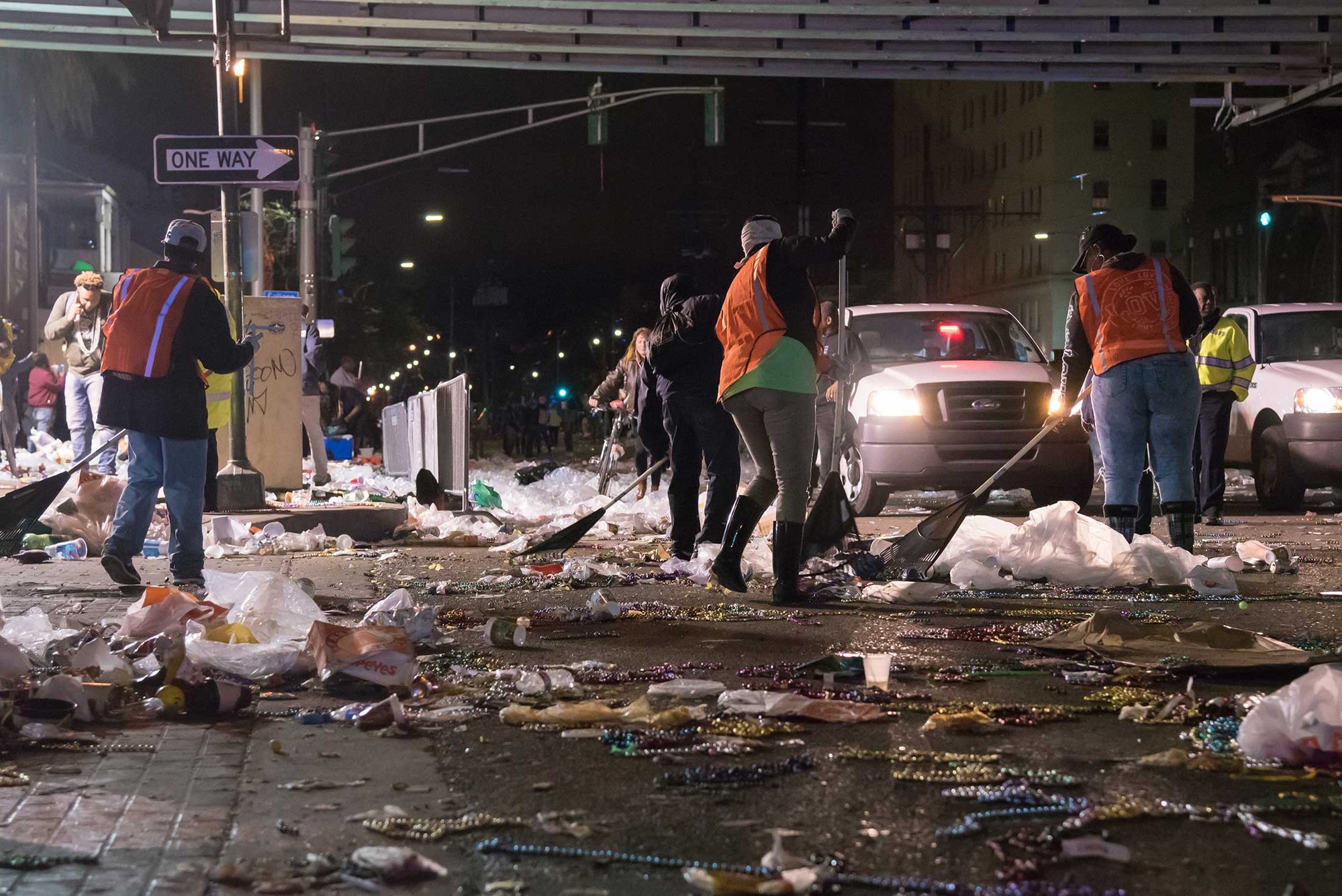 Workers rake trash into the middle of the street along St. Charles Avenue so it can be picked up by bulldozers. It takes the crew of more than 300 about three hours to clean the March 1 parade’s more than 5-mile route.

Biodegradable beads may not be available yet, and recycling efforts are still small, but several hundred Mardi Gras celebrations since the late 17th century have taught New Orleans a thing or two about cleaning up. As the festivities wind down, a small army of some 600 workers descends on the French Quarter, leaving the area so free of debris that it’s difficult to tell the city had a million houseguests a day before.