Marie Kondo argues you should only keep what sparks joy, but The Post's Geoffrey A. Fowler says that using the cloud to keep all your things is life-changing. (Jhaan Elker, Geoffrey Fowler/The Washington Post)

I’d like to tell you about the life-changing magic of not getting rid of things — and keeping them in the cloud.

Marie Kondo has inspired many of us to unstuff closets and discard piles of belongings banished to basements. But there’s a part of her decluttering process that feels out of sync with 21st-century tidying up. In her hit Netflix show, Kondo instructs people to sort through old photos and papers, and throw away the ones that don’t “spark joy.”

Throw them away? “By keeping less — documents, folders, files, emails, etc. — you create more space in your life,” Kondo told me. “Though digital clutter is not tangible like clutter in your home, I believe it carries the same weight.”

I don’t agree. Precious memories don’t need to go into dusty photo albums or the trash. They should go online.

With always-on Internet storage services known as the cloud, I store every photo I’ve taken — about 300,000 and counting. No, that wasn’t a typo. It costs $10 per month. Remember your birthday party in 2009? Okay, me neither, but with a few taps on my phone I can pull up memories from that day. Or here’s my favorite party trick: Tapping on the image of a friend’s face, I can pull up the first photo I ever took of him.

Kondo’s method is about making sure that you have a sensible place for everything. The cloud is where I keep not just photos but also contracts, receipts, children’s drawings, digital books, your Christmas cards, things I want to buy, awesome puns, home videos and music. I can access them anywhere there’s an Internet connection through my phone, laptop, tablet or even TV.

To Kondo, I might look like a digital hoarder, though she puts it in more polite terms. “My tidying method is not about accommodating the size of the space you have available — it’s about choosing what to keep because it sparks joy,” she said. “Just because the cloud has endless space available doesn’t mean you have to fill it!”

That’s true, but moving things to the cloud can also make it easier to part with sentimental items — and even to get more enjoyment out of things. Cloud providers are getting remarkably good at doing the organizing for us with artificial intelligence software. The Internet is evolving to a place where no folding is required.

Your phone alone won’t get rid of your bell-bottom museum or 27 mismatched reindeer mugs. But an online tweak to Kondo’s techniques could make it easier for you to become a minimalist. You just have to become a digital maximalist.

The power of Kondo’s message is its simplicity. Does an object bring you joy? If not, thank it and toss it. The problem is, this process can be torture.

On Kondo’s TV show, people sob in front of piles of possessions, feeling guilt about throwing away gifts or not wanting to say goodbye to the people in photos. It is possible this sorting process can ease the pain of the past and teach gratitude. Just as often, I suspect, it becomes a reason to stop cleaning.

But in a world where a smartphone rarely leaves your side, getting rid of material possessions doesn’t have to mean getting rid of memories. The digital camera is as powerful a cleaning tool as a Hefty 30-gallon trash bag.

Souvenirs: Snap, toss. Recipes: Snap, toss. I’ve even said goodbye to old clothes this way, such as my first concert T-shirt. (It was En Vogue, who surely would support freeing your mind of the clutter.)

The problem the cloud can most help solve is piles of photos and papers. You can buy a scanner, or Google has a free and simple Photo Scan app for phones. Easier yet: Try mail-away services that digitize photos for as little as 8 cents per photo, such as ScanMyPhotos.com and ScanCafe.com. Side benefit: Turning old photos digital keeps them safe from fire, floods and further yellowing.

If you do this, start by tidying your clothes and physical items first, suggests Kondo. “Through the process of tidying your home, you hone your decision-making skills and learn to identify what is really valuable to you," Kondo said. “Refining your sensitivity to joy is critical, because you cannot physically take digital items into your hands to assess their meaning to you.”

There are costs to my approach. You’ll become a renter of online storage. We’re not talking about a ton of money: Prices start at $1 per month, and you can always stop by downloading your stuff. Just beware of any service, like Facebook, that offers endless free photo or video storage — it likely wants your data for some other purpose.

Most of the big-name providers can do the job of storing your stuff and making it available on lots of devices, though each has quirks. The simplest are the ones designed to work with phone operating systems:

Whichever cloud you pick, just promise you’ll keep your stuff secure by using a really, really good password — one you haven’t used anywhere else — and turning on the two-factor authentication option most services offer. 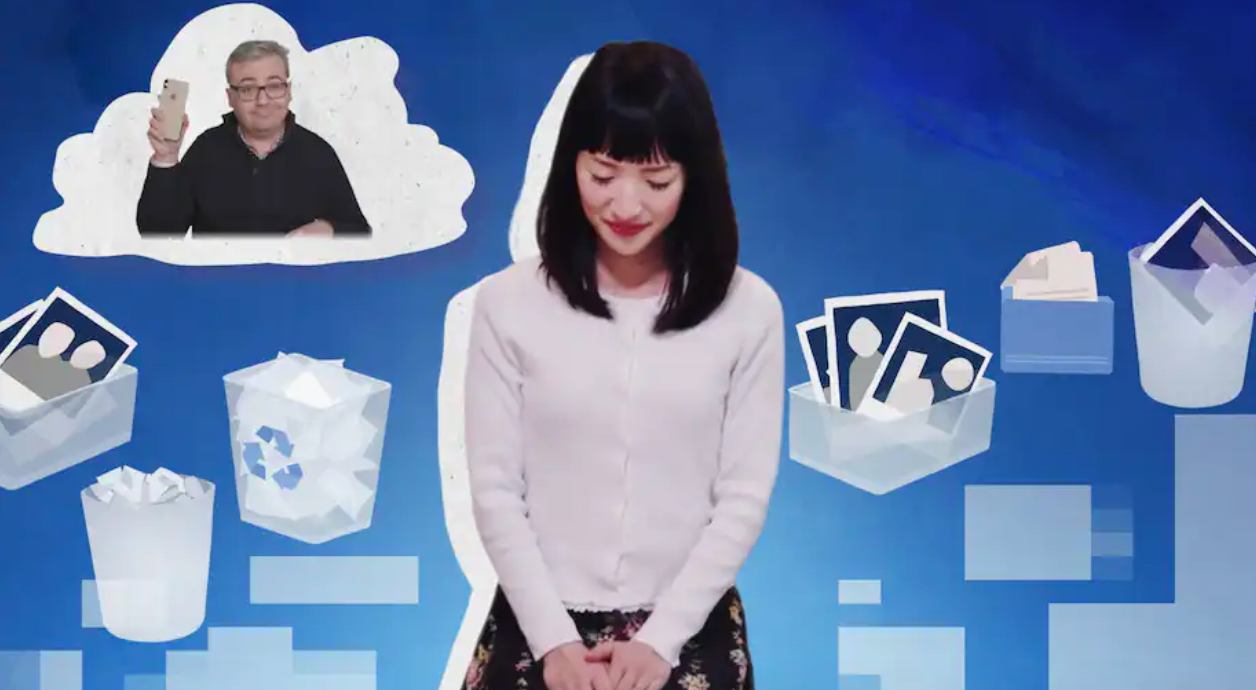 Let a Computer do the Sorting

There’s another benefit to keeping things in the cloud: easier access to joy.

In the past two years, AI software has begun to make Harry Potter-level magic out of mountains of digital snaps. Photo apps that come with most cloud providers use location tags, time stamps and facial identification to let you pull specific photos out of the haystack, as well as automatically group them into related albums.

Google is the best at this. It not only knows faces but also is pretty good at recognizing objects such as sunsets and puppies — and even picking the most appealing shots to surface. Google also automates digital tidying: Pressing a button labeled “archive” moves snaps of receipts, screen shots and paperwork out of the main collection.

Algorithms are a perpetual work in progress, but to me watching them tidy my cloud brings the same pleasure as Kondo-folded clothes. Maybe more, because I don’t have to do the folding.

So what’s the downside of being a digital maximalist? For one, these cloud companies want more of our data — and to get their hooks into us with long-term subscriptions. Hackers and governments can try to snoop around digitized stuff, too, so you have to be extra vigilant about security and privacy. (For those reasons, some extra-cautious people run their own private cloud on hard drives they operate at home.)

And what about digital hoarding? Many of us are already overwhelmed by notifications, overflowing inboxes and social media feeds. Taming your apps — and checking your privacy settings — is always a good idea. But it isn’t inconsistent with using the cloud as your personal archive.

On this point, Kondo and I disagree most. “Are you holding on to digital items because of an attachment to the past? A fear of the future?” she said. “I encourage people to ask the same questions about their digital clutter that they would their physical clutter.”

I don’t feel the same weight from my digital collection as I might from their physical manifestations — I feel empowered by having so much information at my fingertips. Digital abundance is not the same as mental clutter. What matters more than culling and organizing photos and files into folders is having the tools to get to the stuff you want with minimal stress. It’s like how Gmail shifted thinking away from “inbox zero” toward “ inbox infinity,” where search and automatic sorting let us stop wasting time trying to stay on top of messages. But if you’re firmly on team inbox zero, my plan isn’t for you.

The cloud can also bring you closer to another lesson from Kondo: gratitude. This week on Chinese New Year, my Google collection remembered when the holiday fell two years ago — and presented me an awesome photo collection of my family stuffing ourselves with dumplings, plucked from my archive of 300,000 images. That’s way more joy than I could have gotten out of any album in the basement.

Geoffrey A. Fowler is The Washington Post’s technology columnist based in San Francisco. He joined The Post in 2017 after 16 years with the Wall Street Journal writing about consumer technology, Silicon Valley, national affairs and China.Follow him on Twitter.