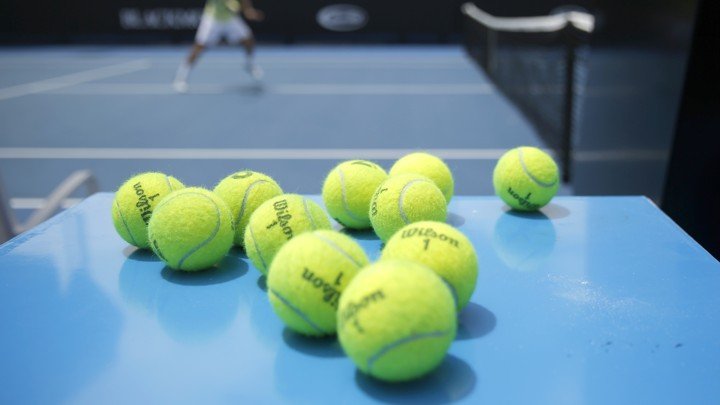 The query came from a Twitter poll I spotted on my news feed, from user @cgpgrey. “Please help resolve a marital dispute,” @cgpgrey wrote. “You would describe the color of a tennis ball as:” green, yellow, or other.

Yellow, obviously, I thought, and voted. When the results appeared, my jaw dropped with cartoonish effect. Of nearly 30,000 participants, 52 percent said a tennis ball is green, 42 percent said it’s yellow, and 6 percent went with “other.”

I was stunned. I’d gone from being so sure of myself to second-guessing my sanity in a matter of seconds. More than that, I could never have imagined the question of the color of a tennis ball—surely something we could all agree on, even in these times—would be so divisive.

I dropped the tweet into my team’s Slack channel, which includes The Atlantic’s science, technology, and health reporters and editors. The long conversation that followed can only be described as a bloodbath.

The seemingly trivial question tore apart our usually congenial group. Lines were quickly and fiercely drawn, team green against team yellow, as my colleagues debated the very definition of color itself. Swords were brandished in the form of links to HTML color codes or the paint selection at Sherwin-Williams. Attempts to broker a cease-fire, to consider that maybe tennis balls are actually yellow-green—or green-yellow, or chartreuse—were brushed aside. At one point, I lashed out at a colleague who then reminded me we were on the same side.

The battle cries eventually subsided, but the war wasn’t over. The next morning, I arrived at the office to find a tube of tennis balls sitting on my desk in a mafia-style warning. They looked green.

An investigation was in order. It began with the most obvious first stop, Wikipedia. “Tennis balls are fluorescent yellow at major sporting events, but in recreational play can be virtually any color,” the page for tennis balls said. And it’s true. A quick spin through Amazon shows that tennis balls, at least according to the labels, come in yellow and green and purple and even pink with Hello Kitty’s face on them.

Next, I turned to the official governing body of tennis around the world, the International Tennis Federation. According to the ITF, tennis balls were once actually white or black. The arrival of television changed that. Viewers had trouble seeing tennis balls as they hurled across the court in televised matches, so the ITF instructed tournaments to start using yellow ones in 1972 (though white ones were still allowed). The new rule said “the ball shall have a uniform outer surface consisting of a fabric cover and shall be white or yellow in color.” Cool history, but it didn’t help explain why we all felt completely unmoored from reason and reality.

Surely the suppliers of tennis balls could help. I reached out to a number of popular tennis-ball manufacturers, including Penn, Wilson, Dunlop, Gamma Sports, and Slazenger, as well as the sporting-goods stores Modell’s and Dick’s. Only Gamma Sports took my query seriously and responded. They put their answer in all caps: “OPTIC YELLOW!” (My colleagues who played tennis or had worked at tennis clubs—the ones with the most experience in actually looking at tennis balls—also thought they were yellow.)

It was time to consult the experts, so I emailed Bevil Conway, a researcher at the National Institutes of Health’s National Eye Institute who studies color perception.

“I’m not looking at any tennis balls now, but I think they are yellow,” Conway replied.

He then dove into the science behind his decision, taking our little investigation from the tennis aisle at Modell’s and plunging it into the ever mysterious realm of human cognition and perception.

“I make this decision as much on the basis of what I think I know about tennis balls—that they are yellow—as I do on what color I recall that they looked when I last saw one,” he said. “In other words, like the color of a lot of objects, how we label [a tennis ball] is determined both by perceptual and cognitive factors: the actual physical light entering your eye and ... knowledge about what people have typically labeled the objects.”

Conway pointed to bananas as an example of this phenomenon. Bananas can be a number of colors—green when they’re not yet ripe, brown when we’ve let them sit out for too long. But we label bananas yellow, and we do it because “this is their state when we care about them,” Conway said. “It is canonical among most people to call bananas yellow.”

By this logic, some people have internalized what they’ve seen at major tournament events and on labels from tennis manufacturers and come to associate tennis balls with the color yellow. Sure, we understand that tennis balls could be made in other colors, but the state of tennis balls when we care about them—such as when we watch a match on TV—is yellow, so when we’re asked to ascribe one color to them all, we go with that. As for why we haven’t agreed on the color of tennis balls as we have for bananas, “maybe they haven’t been around long enough, or the color of them has actually changed,” Conway said. This makes sense. Bananas have been around far longer than tennis balls.

The tennis gods picked yellow for the color of tennis balls because they thought yellow was bright enough for people to see it with ease. And that’s true, but just because something is highly visible to the eye doesn’t mean it’s easy for us to describe it. Red, green, blue, and yellow are “unique hues,” colors that human vision perceives as pure, rather than a mix of two or more. Among these hues, “yellow is the most precisely identified across people,” Conway said. “If you ask people to pick out ‘yellow’ in the spectrum (a color that is neither red nor green), pretty much everyone identifies the same wavelength.”

This shows that people can easily distinguish yellow from other colors. But how that yellow should be described is another question. “Yellow presents an interesting paradox: It is easy to discriminate, but we don’t name it as well as we name other colors like red and orange,” Conway said.

In other words, humans are good at pointing at a yellow paint chip in a line of colorful chips and saying, that’s yellow. But if we’re shown a yellow paint chip alone and asked what color it is, we become less certain about calling it yellow. In a recent study Conway coauthored that surveyed people who speak three different languages—American English, Bolivian Spanish, and an Amazonian language called Tsimane—researchers found that “language systems of people in cultures with little exposure to industrialization are pretty poor at communicating yellow.”

And what about green? “We are generally really bad, across all cultures, in communicating green,” Conway said.

“I can think of many more orange or red objects—apples, tomatoes, cherries, most fruit, faces, etc. So it might not be surprising that there is some disagreement about the color of tennis balls,” he said. “They are an odd color, designed to be odd so that they are especially visible on the court. But because they are odd, we haven’t resolved how to label them.”

The discussion over tennis balls began to resemble another color-related debate: the question of The Dress. You know the one. For what felt like months in 2015, the picture of a dress bitterly divided the internet. In one camp were the people who saw the dress as black and blue, in the other those who saw it as gold and white. Could there be a connection between the way some people perceive the color of tennis balls and the color of The Dress?

Back in 2015, Conway and other experts explained that the difference of opinion about The Dress stemmed from the way the human brain evolved to perceive light (they’ve since fleshed out the theory in a recent paper). We experience all kinds of warm and cool light throughout the day. We get warm light from sunsets and incandescent bulbs, and blue light from overcast skies and computer screens, to name a few.

When we’re looking at a given object in different types of light, our brains make substantial color corrections that allow us to see the object in a stable color over most lighting conditions. Conway’s theory is that some people discount cool colors in their perception, while others discount warm colors, in order to view objects consistently as the light changes around them. When people discount the blue—a cool color—of The Dress, they end up seeing white and gold. When they discount the gold—a warm color—they see blue and black.

Conway took it a step further, suggesting that the way people see tennis balls could reveal something about their lifestyles. Night owls, for example, spend most of their time under artificial, warm light, which means they’d discount warm colors and see a tennis ball as green. Early birds, on the other hand, get plenty of exposure to blue daylight, which means they would discount cool colors and see a tennis ball as yellow. “I’d emphasize that this is just a theory, and we’d need lots of data to support it before I’d believe it were true,” Conway said.

This is where my investigation ends, and I turn the question to you, dear reader. What color is a tennis ball? We’ve reported, now you decide. I must warn you that pondering this may lead you, as it did us, toward an existential cliff where we were reminded, once more, though we all live in the same world, it can look completely different to different people. “The reason color is so compelling is that it is a computation of the brain, but one that is so good that we think it is an objective property of the world,” Conway said. “Experiences that make it impossible to ignore the role of the brain in how we compute color are therefore very disconcerting.”

Here at The Atlantic, the great tennis-ball debate eventually tapered off. We lowered our weapons and sort of calmed down. But there would be no consensus. Yes, we would move on, continue working alongside each other, but we would hold onto our allegiances, team green and team yellow, like coats of armor. The color of a tennis ball is, and would remain, in the eye of the beholder.

My colleague Julie Beck summed up the ordeal with a sentiment we could all agree with. “It is truly horrifying every time it gets pointed out that we’re all walking around thinking we share the same reality,” she said. “And we just are not.”