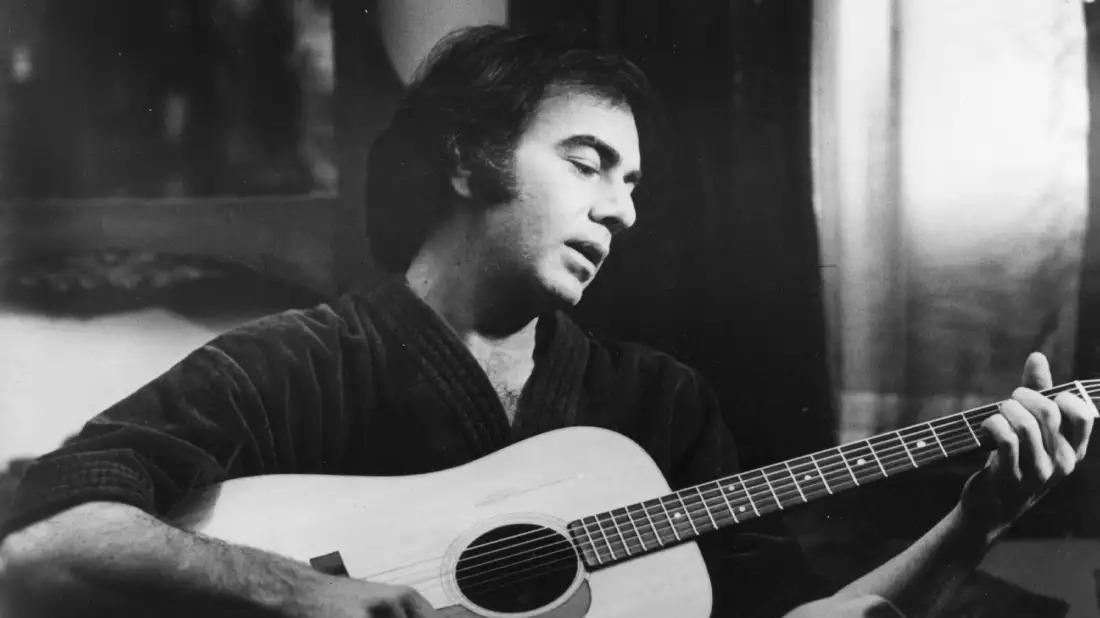 The story of Neil Diamond’s "Sweet Caroline" has it all: love, baseball, Kennedys, Frank Sinatra, Elvis, and the triumph of the human spirit. It’s pop’s answer to the national anthem, and as any karaoke belter or Boston Red Sox fan will tell you, it’s way easier to sing than "The Star-Spangled Banner." As the song celebrated its 50th birthday in 2019, now’s a good time—so good, so good, so good—to dig into the rich history of a tune people will still be singing in 2069.

"Where it began, I can’t begin to knowing," Diamond sings in the song’s iconic opening lines. Except the "where" part of this story is actually pretty simple: Diamond wrote "Sweet Caroline" in a Memphis hotel room in 1969 on the eve of a recording session at American Sound Studio. By this point in his career, Diamond had established himself as a fairly well-known singer-songwriter with two top-10 hits—"Cherry Cherry" and "Girl, You’ll Be a Woman Soon"—to his name. He’d also written "I’m a Believer," which The Monkees took to #1 in late 1966.

The "who," as in the identity of the "Caroline" immortalized in the lyrics, is the much juicier question. In 2007, Diamond revealed that he was inspired to write the song by a photograph of Caroline Kennedy, daughter of John F. Kennedy, that he saw in a magazine in the early ’60s, when he was a "young, broke songwriter."

"It was a picture of a little girl dressed to the nines in her riding gear, next to her pony," Diamond told the Associated Press. "It was such an innocent, wonderful picture, I immediately felt there was a song in there.” Years later, in that Memphis hotel room, the song was finally born. 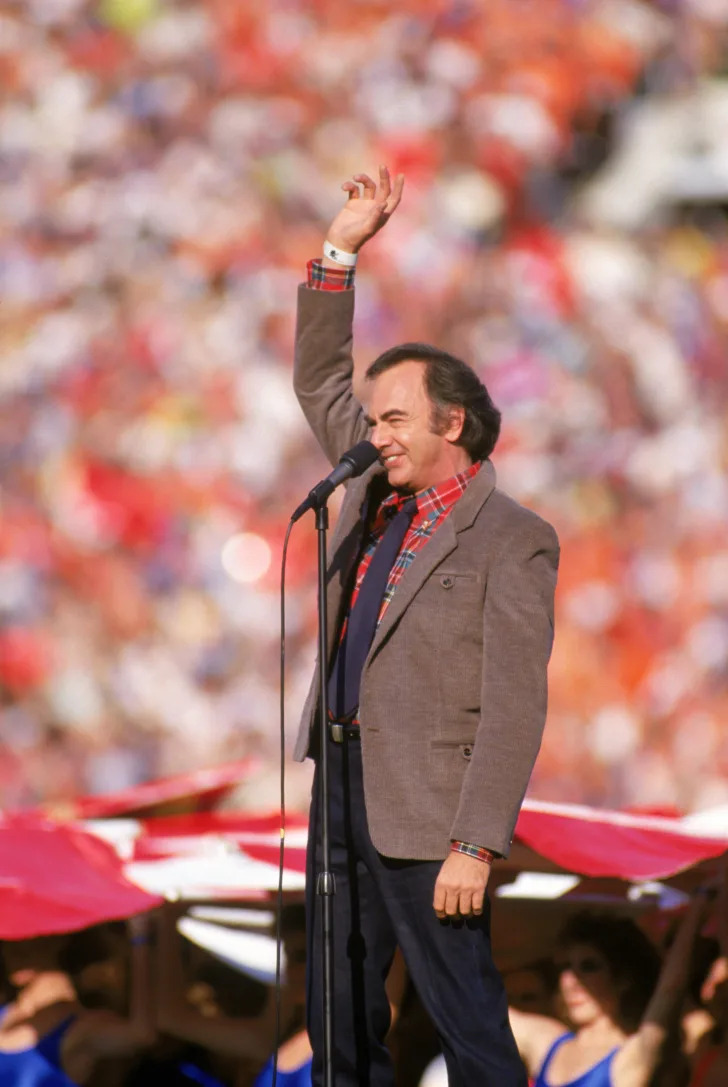 Perhaps because it’s a little creepy, Diamond kept that tidbit to himself for years and only broke the news after performing the song at Kennedy’s 50th birthday in 2007. "I’m happy to have gotten it off my chest and to have expressed it to Caroline," Diamond said. "I thought she might be embarrassed, but she seemed to be struck by it and really, really happy."

The plot thickened in 2014, however, as Diamond told the gang at NBC’s TODAY that the song is really about his first wife, Marsha. "I couldn’t get Marsha into the three-syllable name I needed,” Diamond said. "So I had Caroline Kennedy’s name from years ago in one of my books. I tried ‘Sweet Caroline,’ and that worked."

It certainly did. Released in 1969, "Sweet Caroline" rose to #4 on the Billboard Hot 100. In the decade that followed, it was covered by Elvis Presley, soul great Bobby Womack, Roy Orbison, and Frank Sinatra. Diamond rates Ol’ Blue Eyes’ version the best of the bunch.

"He did it his way," Diamond toldThe Sunday Guardian in 2011. "He didn't cop my record at all. I've heard that song by a lot of people and there are a lot of good versions. But Sinatra's swingin', big-band version tops them all by far."

Another key question in the "Sweet Caroline" saga is "why"—why has the song become a staple at Fenway Park in Boston, a city with no discernible connection to Diamond, a native of Brooklyn?

It’s all because of a woman named Amy Tobey, who worked for the Sox via BCN Productions from 1998 to 2004. During those years, Tobey had the wicked awesome job of picking the music at Sox games. She noticed that "Sweet Caroline" was a crowd-pleaser, and like any good baseball fan, she soon developed a superstition. If the Sox were up, and Tobey thought they were going to win the game, she’d play the song somewhere in between the seventh and ninth innings.

"I actually considered it like a good luck charm," Tobey told The Boston Globe in 2005. "Even if they were just one run [ahead], I might still do it. It was just a feel." It became a regular thing in 2002, when Fenway’s new management asked Tobey to play "Sweet Caroline" during the eighth inning of every home game, regardless of the score.

At first, Tobey was worried that mandatory Diamond would lead to bad luck on the actual diamond. But that wasn’t the case, as the Sox won the World Series in 2004, ending the "Curse of the Bambino" and giving Beantown its first title since 1918. In 2010, Diamond made a surprise appearance at Fenway to perform "Sweet Caroline" during the Red Sox's season opener against the New York Yankees. He wore a Sox cap and a sports coat emblazoned with the message "Keep the Dodgers in Brooklyn."

A different mood greeted Diamond when he returned to Fenway on April 20, 2013, just five days after bombings at the Boston Marathon killed three people and injured nearly 300 others. "What an honor it is for me to be here today," Diamond told the crowd. "I bring love from the whole country." He then sang along with the ’69 recording of the song, leading the crowd in the "Ba! Ba! Ba!" and "So good! So good! So good!" ad-libs that have essentially become official lyrics. Diamond also donated all the royalties he received from the song that week, as downloads increased by 597 percent.

The Red Sox aren't the only sports team to have basked in the glory of "Sweet Caroline." The song has become popular with both the Penn State Nittany Lions and Iowa State Cyclones football squads and has even crossed the Atlantic to become part of the music rotation for England's Castleford Tigers crew team and Britain's  Oxford United Football Club.

Over the last five decades, millions of people have had their lives touched by "Sweet Caroline" in one way or another. The enduring popularity must be a pleasant surprise for Diamond, who had no idea he’d written a classic back in 1969. "Neil didn't like the song at all," Tommy Cogbill, a bass player at American Sound Studio, said in an interview for the 2011 book Memphis Boys. "I actually remember him not liking it and not wanting it to be a single."

Kenneth Partridge is a music and pop-culture writer based in Brooklyn. He's written for such publications as Billboard, The AV Club, Pitchfork, and Refinery29. His hobbies include reading, running, shopping for records, and attempting to justify his love of ska.