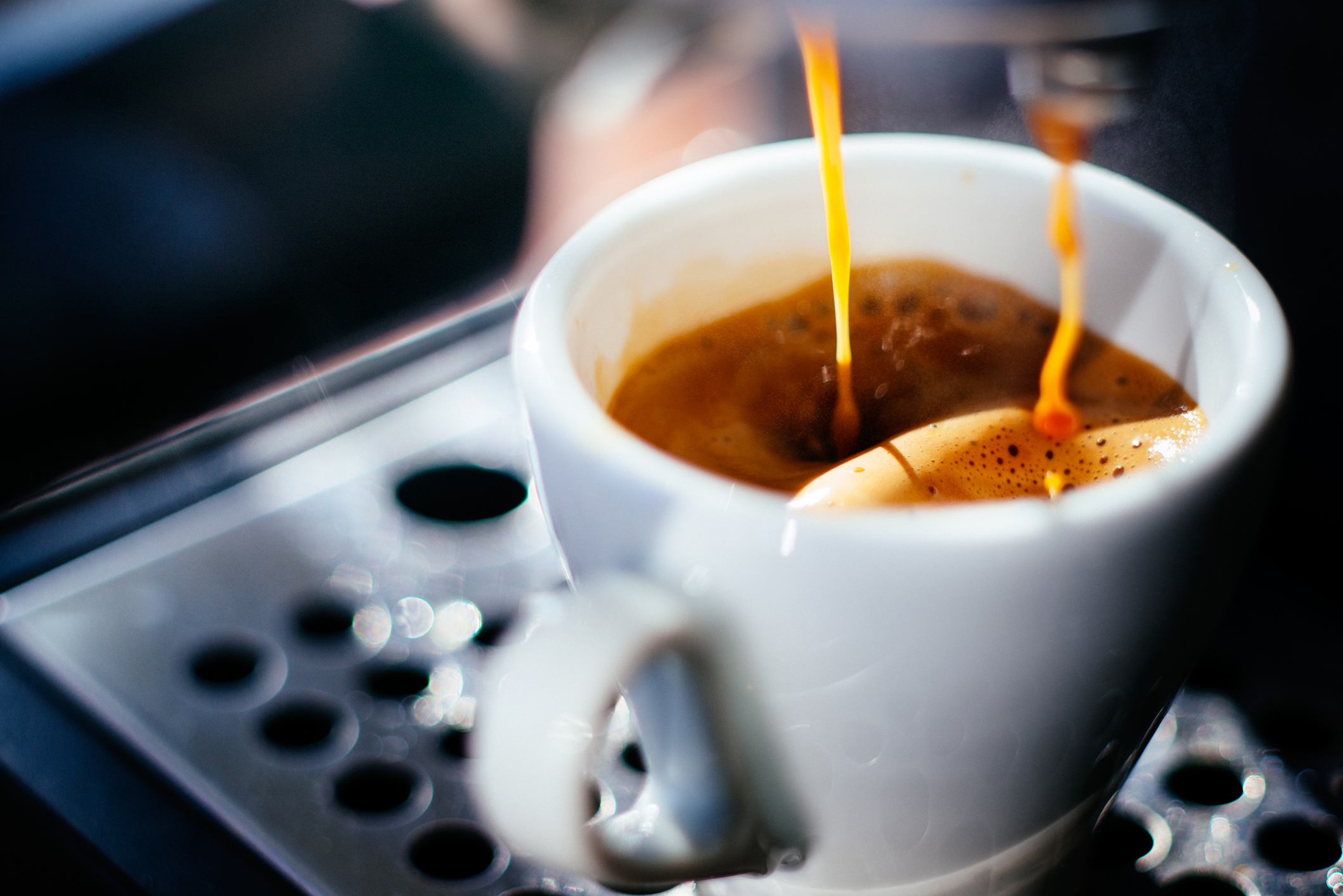 Regular caffeine use alters your brain’s chemical makeup, leading to fatigue, headaches and nausea if you try to quit. Photo by Guido Mieth / Getty Images.

Within 24 hours of quitting the drug, your withdrawal symptoms begin. Initially, they’re subtle: The first thing you notice is that you feel mentally foggy, and lack alertness. Your muscles are fatigued, even when you haven’t done anything strenuous, and you suspect that you’re more irritable than usual.

Over time, an unmistakable throbbing headache sets in, making it difficult to concentrate on anything. Eventually, as your body protests having the drug taken away, you might even feel dull muscle pains, nausea and other flu-like symptoms.

This isn’t heroin, tobacco or even alcohol withdrawl. We’re talking about quitting caffeine, a substance consumed so widely (the FDA reports that more than 80 percent of American adults drink it daily) and in such mundane settings (say, at an office meeting or in your car) that we often forget it’s a drug—and by far the world’s most popular psychoactive one.

Like many drugs, caffeine is chemically addictive, a fact that scientists established back in 1994. In May 2013, with the publication of the 5th edition of the Diagnostic and Statistical Manual of Mental Disorders (DSM), caffeine withdrawal was finally included as a mental disorder for the first time—even though its merits for inclusion are symptoms that regular coffee-drinkers have long known well from the times they’ve gone off it for a day or more.

Why, exactly, is caffeine addictive? The reason stems from the way the drug affects the human brain, producing the alert feeling that caffeine drinkers crave.

Soon after you drink (or eat) something containing caffeine, it’s absorbed through the small intestine and dissolved into the bloodstream. Because the chemical is both water- and fat-soluble (meaning that it can dissolve in water-based solutions—think blood—as well as fat-based substances, such as our cell membranes), it’s able to penetrate the blood-brain barrier and enter the brain.

Structurally, caffeine closely resembles a molecule that’s naturally present in our brain, called adenosine (which is a byproduct of many cellular processes, including cellular respiration)—so much so, in fact, that caffeine can fit neatly into our brain cells’ receptors for adenosine, effectively blocking them off. Normally, the adenosine produced over time locks into these receptors and produces a feeling of tiredness. 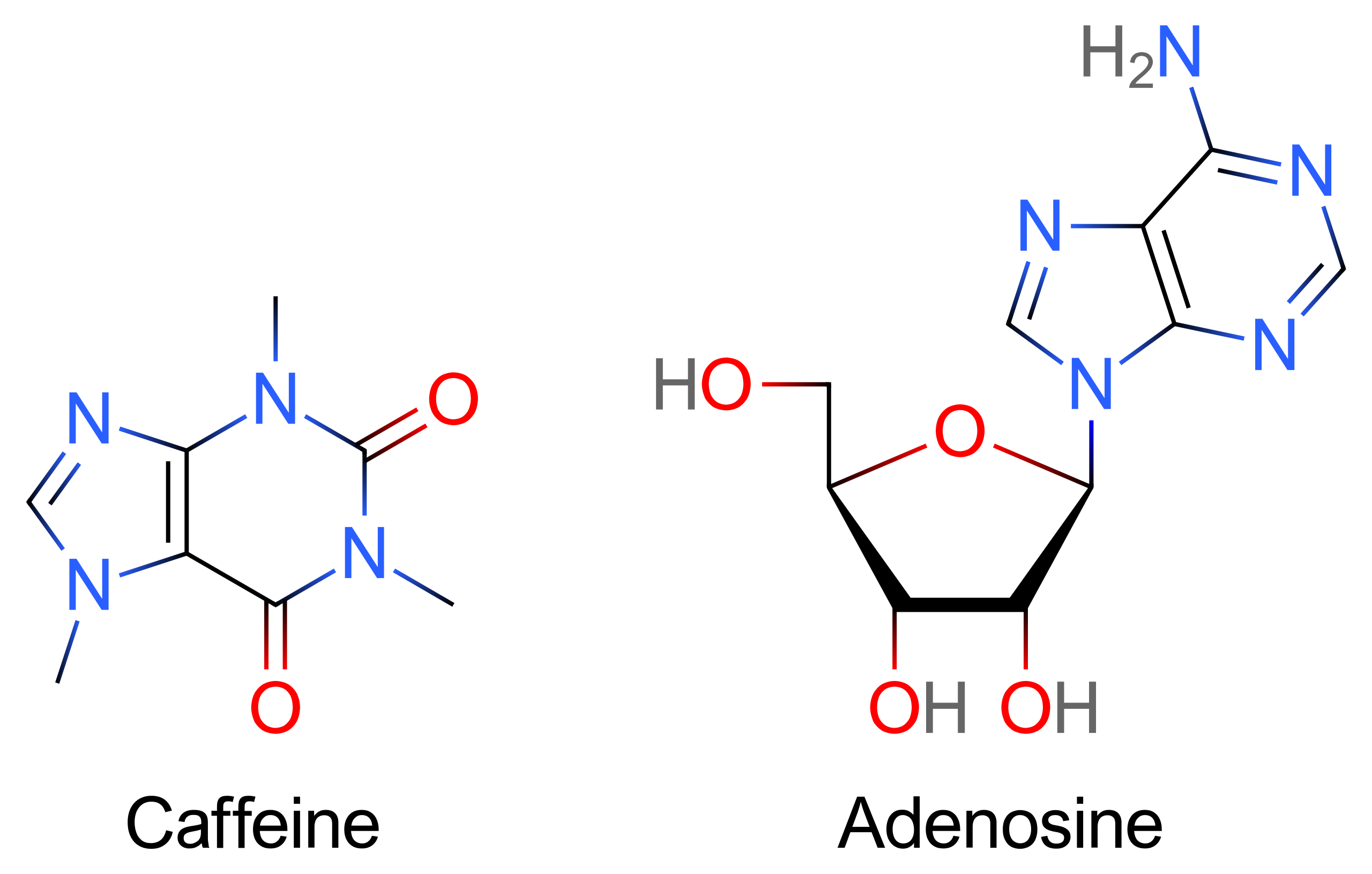 Caffeine structurally resembles adenosine enough for it to fit into the brain’s adenosine receptors. Image via Wikimedia Commons / Getty Images.

When caffeine molecules are blocking those receptors, they prevent this from occurring, thereby generating a sense of alertness and energy for a few hours. Additionally, some of the brain’s own natural stimulants (such as dopamine) work more effectively when the adenosine receptors are blocked, and all the surplus adenosine floating around in the brain cues the adrenal glands to secrete adrenaline, another stimulant.

For this reason, caffeine isn’t technically a stimulant on its own, says Stephen R. Braun, the author or Buzzed: the Science and Lore of Caffeine and Alcohol, but a stimulant enabler: a substance that lets our natural stimulants run wild. Ingesting caffeine, he writes, is akin to “putting a block of wood under one of the brain’s primary brake pedals.” This block stays in place for anywhere from four to six hours, depending on the person’s age, size and other factors, until the caffeine is eventually metabolized by the body.

In people who take advantage of this process on a daily basis (i.e. coffee/tea, soda or energy drink addicts), the brain’s chemistry and physical characteristics actually change over time as a result. The most notable change is that brain cells grow more adenosine receptors, which is the brain’s attempt to maintain equilibrium in the face of a constant onslaught of caffeine, with its adenosine receptors so regularly plugged (studies indicate that the brain also responds by decreasing the number of receptors for norepinephrine, a stimulant). This explains why regular coffee drinkers build up a tolerance over time—because you have more adenosine receptors, it takes more caffeine to block a significant proportion of them and achieve the desired effect.

This also explains why suddenly giving up caffeine entirely can trigger a range of withdrawal effects. The underlying chemistry is complex and not fully understood, but the principle is that your brain is used to operating in one set of conditions (with an artificially-inflated number of adenosine receptors, and a decreased number of norepinephrine receptors) that depend upon regular ingestion of caffeine. Suddenly, without the drug, the altered brain chemistry causes all sorts of problems, including the dreaded caffeine withdrawal headache.

The good news is that, compared to many drug addictions, the effects are relatively short-term. To kick the thing, you only need to get through about 7-12 days of symptoms without drinking any caffeine. During that period, your brain will naturally decrease the number of adenosine receptors on each cell, responding to the sudden lack of caffeine ingestion. If you can make it that long without a cup of joe or a spot of tea, the levels of adenosine receptors in your brain reset to their baseline levels, and your addiction will be broken.

Joseph Stromberg was previously a digital reporter for Smithsonian.