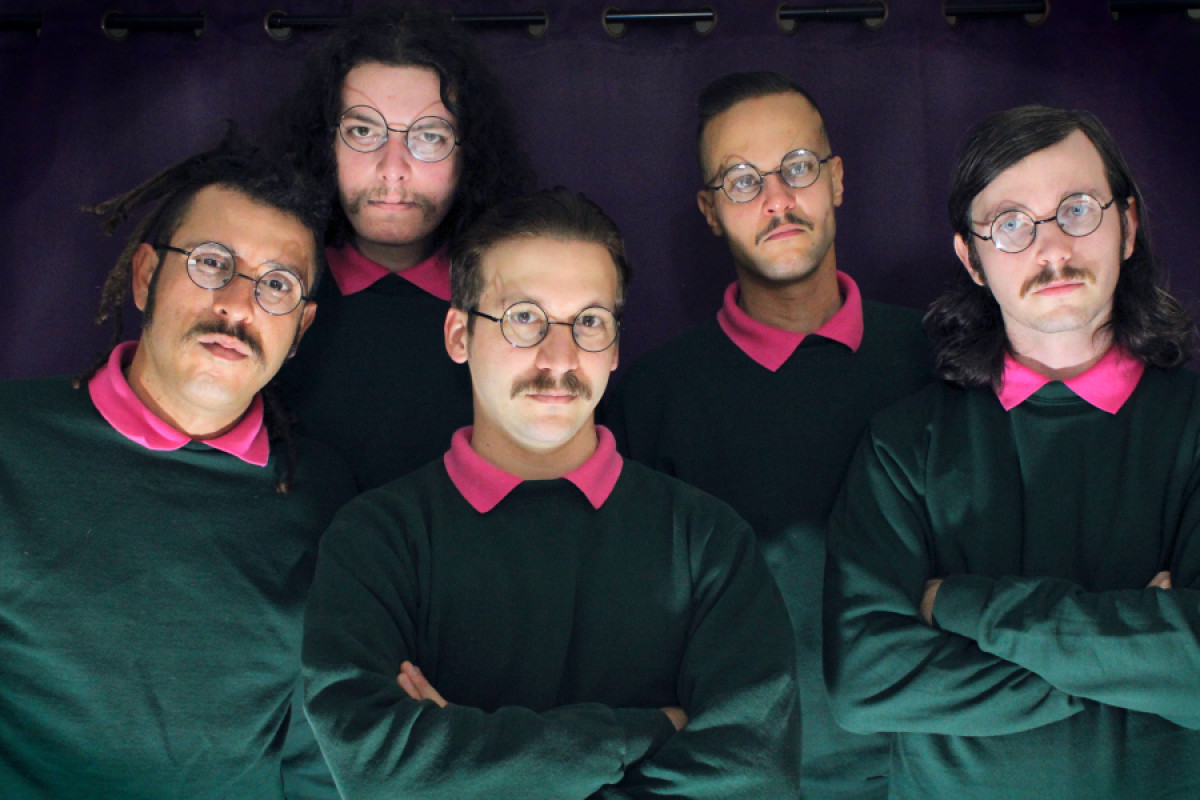 The Phoenix metal band dedicated to Ned Flanders, Okilly Dokilly, appeared during the closing credits of a recent 'Simpsons' episode.

It was Sunday night and the closing credits of the 659th episode of The Simpsons were suddenly interrupted. The standard black screen disappeared and was replaced by five adult men tearing through a brutal heavy metal track, guzzling white wine and smashing glasses and instruments while dressed as Ned Flanders. Devout Simpsons fans with astute ears might’ve even recognized the lyrics the frontman was barking, “You only live once/give me a white wine spritzer.”

The closing credits clip wasn’t some elaborate prank concocted by The Simpsons ’ writers and producers, but a music video made by the band Okilly Dokilly for their song “White Wine Spritzer” off their 2016 debut album, Howdilly Doodilly . Formed in 2015, Okilly Dokilly proudly claim to be the world’s first (and only) “Nedal” band — a metal outfit that pulls most of its lyrics from the mouth of Springfield’s most pious denizen, Ned Flanders (“White Wine Spritzer,” for instance, comes from a Season 10 episode where Homer convinces Ned to let loose in Vegas and the two end up marrying cocktail waitresses).

“We saw the video and knew they had to be on the show,” longtime Simpsons showrunner Al Jean tells Rolling Stone . “We do not endorse their message of indiscriminate drinking of white wine spritzers.”

What started as a joke between friends four years ago has now become official Simpsons lore (and maybe even canon, a la Armin Tamzarian). Just hours after the episode aired, Okilly Dokilly shared the news with a sold out crowd at their Chicago show, and the morning after, the band’s frontman, who goes by the stage name Head Ned, says he’s still in shock.

“I’m very much in disbelief. It’s like this is just a strange alternate universe and I’m gonna wake up the next day and it’s just like, ‘No, you didn’t start the Ned Flanders band, you still work in accounting,’” Head Ned tells Rolling Stone . “And I’ll be like, ‘Well alright, at least my imagination knows how to have a good time.’”

The idea for Okilly Dokilly came from a conversation between Head Ned and the group’s original drummer, Bled Ned, who were trying to imagine the most ill-fitting name for a death metal band. After hitting upon Okilly Dokilly, the duo continued to spin the joke out: What if the frontman was dressed like Ned Flanders, what if everyone dressed like Ned Flanders, what if it was a “Nedal band” not a “metal band,” what if all the lyrics were Flanders quotes. The dream began to materialize when Head Ned realized they not only had access to a pink Flying V guitar, but his job at a clothing company allowed him to buy green sweaters in bulk.

When it comes to writing songs, Head Ned says a Flanders quote must fit one of two criteria: It either has to sound super dark and metal out of context (“Nothing At All,” “Claw My Eyes Out”) or so silly it has no place in a metal song (“Godspeed Little Doodle,” “I Can’t, It’s a Geo”). When the band set out to make their second album, Howdilly Twodilly , released last month, Head Ned took on the enviable task of re-watching the first 10 seasons of The Simpsons and jotting down the best lines in a notebook.

More than the novelty, Okilly Dokilly’s dedication to their core bit has made them cult favorites. They’ve toured the U.S. extensively and in 2018, even made it to the U.K., where Head Ned says he fully realized the the true scope of The Simpsons ’ reach. It was during one such tour that The Simpsons reached out. Head Ned remembers waking up one morning in the band’s van — obviously nicknamed “Ned Vanders” — to an e-mail from Simpsons producer Richard K. Chung, who said the show was interested in running the “White Wine Spritzer” video (at the time, this was the band’s only music video; more recently they shared a clip for Howdilly Twodilly ’s “Reneducation”). When the band asked how The Simpsons team had discovered them, Head Ned says they were told Al Jean came across their work via a Google alert.

In an early interview with Rip It Up, Head Ned joked that the only reason they started Okilly Dokilly was to get an autograph from Simpsons creator Matt Groening, even if it came on a cease and desist letter. Head Ned admits the band was never quite sure where they stood legally and there was a shot of worry that accompanied that fateful e-mail. Now, however, Okilly Dokilly have the ultimate Simpsons co-sign to hold up as they continue their North American tour in support of Howdilly Twodilly — though they’re still waiting on that Groening autograph.

“We’ve always operated as an homage to the show,” Head Ned says. “It’s great to be on the frontline of these tiny Simpsons fans conventions across the U.S. We’ve never tried to do anything as a deterrent to the show, but you’re never sure how the legality of everything works. But the fact that they contacted us and it wasn’t anything where they wanted us to stop and go home was very, very cool.”