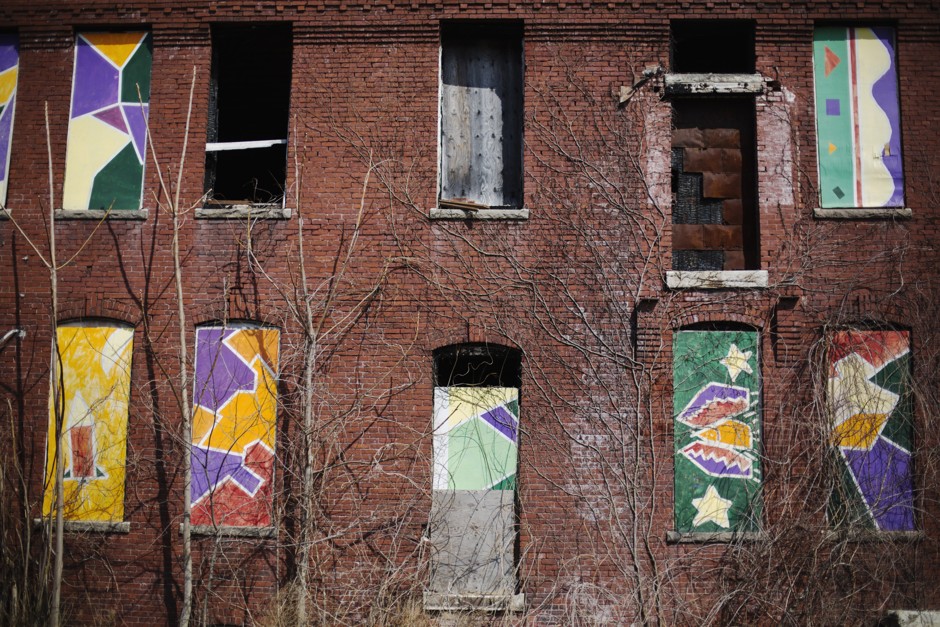 In 1982, George L. Kelling and James Q. Wilson told a story about a window, a story that changed the fates of entire neighborhoods for decades. Writing in the March issue of The Atlantic, Kelling and Wilson proposed that American policing needed to get back to the project of maintaining order if America wanted communities be safe from harm. “Disorder and crime are usually inextricably linked, in a kind of developmental sequence,” they argued. One broken window leads to scores of broken windows; broken windows signal the breakdown of neighborhood social control; neighborhoods become “vulnerable to criminal invasion,” communities ridden with destruction, drug dealing, prostitution, robbery, and ultimately, serious violence.

In essence, Kelling and Wilson argued that latent danger loomed everywhere, and everywhere people’s disorderly impulses needed to be repressed, or else. Their “broken windows theory” didn’t stay theoretical: Also known as order maintenance policing, this tactic propelled an entire generation of policing practice that sought to crack down on minor “quality-of-life” infractions as a way to stem violence.

As taken up by police in New York City, Los Angeles, and across the country, broken windows policing led to the aggressive use of stops, summons, and misdemeanor arrests in predominantly black and Hispanic neighborhoods. More than 30 years later, the evidence demonstrates that the broken windows paradigm does little to nothing to reduce serious crime but does tend to make people feelmore unsafe, reduce trust in and cooperation with police, and could contribute to, in fact, producing and facilitating more violence.

While police departments often recognize that “ we can’t arrest our way out of the problem,” the broken windows paradigm remains active throughout policing. Perhaps most significantly, it still colors how the public views violence and demands responses to it: both as a danger that characterizes entire poor communities of color, and as a menace that poses a constant threat.

This long-held view is, simply, wrong.

The knowledge that we’ve gained since 1982 unequivocally tells us something else: Serious violence is extremely concentrated in very particular places and, most importantly, among very particular people. Dispelling the notion of “dangerous neighborhoods,” extensive research on geographic concentration has consistently found that around half of all crime complaints or incidents of gun violence concentrated at about 5 percent of street segments or blocks in a given city. Moving past “violent communities,” sophisticated analysis of social networks have demonstrated that homicides and shootings are strongly concentrated within small social networks within cities—and that there is even further concentration of violence within these social networks.

For example: In Chicago, a city often used in the media and elsewhere as an example of the worst of American urban violence, researchers found that a social network with only 6 percent of the city’s population accounted for 70 percent of nonfatal gunshot victimizations. Violent crime isn’t waiting to happen on any given block of a poorer neighborhood, nor is it likely to arise from just anyone who happens to live in one.

And, despite claims to the contrary about upticks in violence associated with the “ Ferguson Effect” or “ ACLU Effect”—reductions in street stops when police have opted to, or have been forced to, change enforcement practices—massive levels of low-level enforcement does not produce public safety. In fact, such policing can make communities less safe by pushing people away from formal means of resolving disputes and towards private forms of violence. So how can we explain the nature of serious urban violence?

At the American Society of Criminology’s annual conference, my colleagues and I at the National Network for Safe Communities at John Jay College presented evidence of what many in the violence prevention field have known for a long time, but has yet to become the public common sense. In our study of serious violence in over 20 cities, we found that less than 1 percent of a city’s population—the share involved in what we call “street groups” (gangs, sets, and crews)—is generally connected to over 50 percent of the city’s shootings and homicides. We use “group” as a term inclusive of any social network involved in violence, whether they are hierarchical, formal gangs, or loose neighborhood crews. In city after city, the very small number of people involved in these groups consistently perpetrated and were victimized by the most serious violence.

To be clear: The number of group-involved people actually committing homicides or shootings is still far smaller than the less-than-1-percent of a city’s population in these groups. 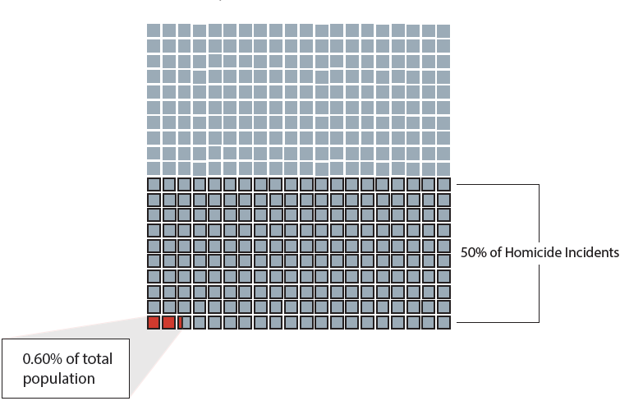 This held true even in areas considered chronically “dangerous,” like parts of East Baltimore. There, the group member population totaled only three quarters of a percentage point, even as they were connected to 58.43 percent of homicides. Shootings tend to be even more concentrated than homicides. In Minneapolis, we found that 0.15 percent of the population was determined to be involved in groups, but this population was connected to 53.96 percent of shootings—a proportion over 350 times higher than their population representation.

More than geography or social networks, this evidence offers the most focused lens yet in to what violence really looks like in American cities. Crucially, focusing on groups offers an explanation for homicides and shootings in ways that other theories have not. Broken windows theory posits that public disorder encourages lawlessness of all sorts. But it’s not clear why exactly someone who has started breaking the windows of abandoned cars—or someone simply observing petty acts of vandalism—would conclude from this that it’s also acceptable to shoot other human beings. While violence is concentrated in very particular places, it’s not the places themselves that are committing homicides.

Rather, to understand violence, our research points again to the context, norms, and dynamics of street groups. Street groups involved in violence are generally composed of young men of color living in communities with long histories of structural discrimination and alienation from state institutions, particularly law enforcement. These areas have generally suffered from both over-enforcement and under-protection. Intrusive, broken-windows-style policing means mass stop-and-frisk interactions, along with tickets and arrests for minor offenses—but it doesn’t come with an equivalent investment in preventing or solving offenses like homicide. Indeed, it often makes it harder to do so, thanks to the cycle of mistrust between police and community members. The near-total impunity for homicides and shootings in distressed communities signals that the state can’t or won’t actually protect people from the most significant harm.

Where that’s true, people feel the need to protect themselves and settle disputes through other means, including private violence. Street groups offer the perception of safety, but tend to embed norms and behaviors that produce violence and put group members at even more risk. Those norms include the use of violence to defend status and solve disputes, the presence of gun carrying, and cycles of retaliation. Being involved with a street group makes people more likely to be both a perpetrator and a victim of serious violence. It’s not a surprise that groups are disproportionately connected to the total violence in a city—violence is acted out by people within a context of alienation from formal public safety systems and who face a very real fear of victimization.

If we recognize how violence actually transpires in our cities, we can reorient how we try to stop it. Less than 1 percent of the population is involved in groups connected to half of homicides and shootings—but there is, in fact, a far smaller number of people within those groups directly involved in committing that violence. We should direct public safety approaches at this tiny subset of the population, and recognize the concentration of trauma and violence around them. For example, hospital intervention, street outreach, and focused deterrence strategies all focus resources on the people at highest risk of being involved in violence. The strategies that focus specifically on groups offer a more effective, and less damaging, approach to preventing violence than surveilling a vast number of unknown perpetrators across entire areas of a city.

Changing public consciousness about the nature of violent crime is crucial to undermining the appeal of the broken windows paradigm. The notion that public disorder drives criminality can seem an intuitive approach to public safety. But if people understand that most serious violence circles specific interpersonal group dynamics in structurally disadvantaged communities, order maintenance policing seems more like what study after study shows it is: an unnecessary evil.

That doesn’t mean there’s no connection between the condition of the built environment and crime: Some kinds of place-based interventions, such as cleaning and converting vacant land, for example, do appear to increase public safety. But those projects don’t use arrests or stops to fix broken windows. Stopping violent crime means addressing the risks and needs of those most likely to be involved in it. Now that we have clear evidence of the extraordinary concentration of that risk in American cities, we can and should follow those facts, not a theory that’s only ever been just that.

Stephen Lurie is a writer and former research and policy advisor at the National Network for Safe Communities. He is based in Brooklyn.